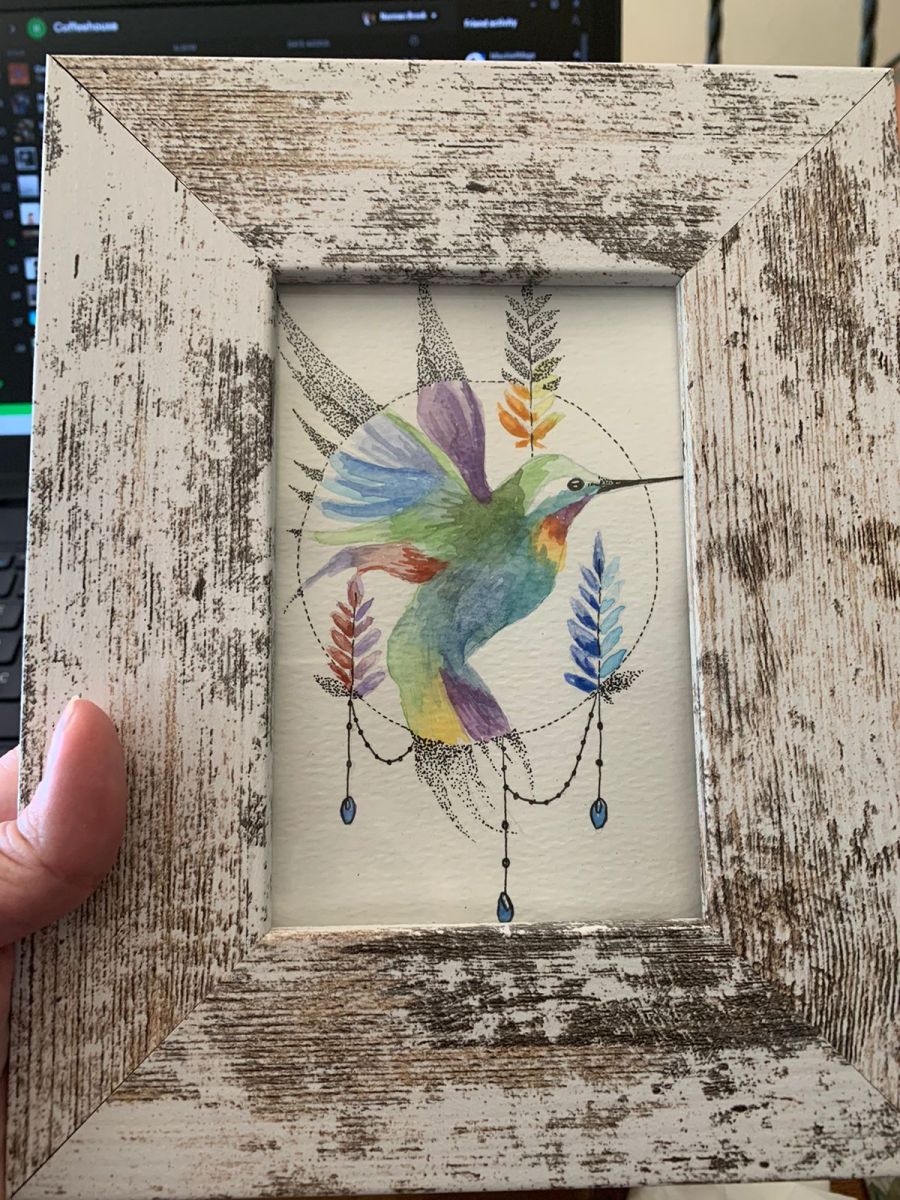 It is a 3 day weekend as we had Friday off for Heritage Day. It is lovely having an extra day to just chill and even better to be paid for it!

I spent Friday morning on my front balcony drinking tea from my new mug. It is nice to be using the little table I renovated.

I spend a lot of time there watching the birds. Can you see the wee boys sitting around the house feeding?

I saw the oddest thing. I went in to get the binoculars just to make sure I was not just blind or hallucinating. A small bird flew over to land on the perch of the feeder at the same time as a pigeon landed on the ground below it. The smaller bird proceeded to flick down seeds to the pigeon on the ground below. Was this arrangement discussed and agreed upon before hand? Was it a spur of the moment attempt at comradery? I was fascinated by this. Humans could use this as an example in co-existence. There was plenty of food to share, it did not hurt lil bird to give some to mr pigeon but it also did not benefit him. So many people have a ‘what’s in it for me?’ attitude. Apparently birds do not. Of course some big birds of prey eat smaller birds so not sure how that works out there. Let’s not think about that.

It has been a beautiful morning, Norm is out working in the city and I slept late and am now going to potter about the garden after I post my blog.

Last weekend the wind was howling and the skies were grey but the sun was peeking out enough to make it bearable so Norm and I managed to achieve a lot of little chores that we needed to do.

I worked hard on tidying up my Wild African Iris plants above the pool area. The dead brown fronds had gotten out of control, they had a variety of weeds hiding away in the midst of them and the dead blooms needed clipping. It looks so much tidier now that I attacked it. As this is in my direct line of vision from my desk it was bugging me.

Norm did a bit of tree trimming on Sunday. Here he is being silly pretending to steal lemons from our neighbour. We are easily amused. Or we have been in isolation too long.

He also cleared out a lot of limbs that were either hanging directly over the pool or blocking the sun from reaching the pool. We need one more round of trimming to get it the way we want it but it is much better already. The pool was freezing last year as it never saw the sun. I am more than ready for summer, but of course once it gets hot you will hear me complain about the heat. At least now that the bedroom is air conditioned I won’t stress at night and during the day I can pop into the pool on my breaks, I could have worse worries.

We also did a bit of painting last weekend. Norm is busy sanding down and painting the door that goes from our pantry into the garage. The dogs (i.e. Navajo) had wrecked it by scratching it with their claws but it is a heavy duty expensive steel door and we did not want to replace it if it could be saved. Norm has done a great job so far, it is transformed.

I put another coat of chalk paint onto the little table I want to put in the bathroom and once dried I will wax it and we can get it set up with a nice planter and some plants to bring a bit of colour into the family bathroom.

I felt like we achieved a lot and being productive is always a good feeling. Now I need a new project!

I had a few things I had ordered online arrive this week. I ordered some photo frames and have now put the beautiful card my daughter Caitlin made for me into a frame. She is so talented.

I also changed the frame for the other print I won on Instagram and Norm is going to hang them both on the landing.

I also received the new unit I had ordered for my lounge. It was cheap cheap cheap and it balances out the black Moroccan unit on the opposite side of the room. I love the mid-century legs even though that style matches nothing else in my house. I am not 100% settled on what I will put on the little shelves but I will play around until I am happy.

I ordered a new door mat which looked cute online but the orange background colour is a bit garish in real life. If Frida Kahlo was reincarnated as a cat this is what she would look like, she even kept her unibrow in this incarnation. Norm refuses to allow Frida Cat-Lo to welcome people to our home (not that anyone ever comes here) so, I have decided it can be the mat under the pet’s water bowls.

On the weekend I watched a horror film that someone recommended called ‘The Killer Under The Bed‘. It is about a mom and her 2 high school age daughters who move to a new town after the father dies in a tragic car accident. Young Kilee is struggling with all of the changes in her life and is fighting with her sister and is also being bullied at her new school when she finds an ugly weird doll full of pins hanging in the shed at their new home. She takes it inside and is intrigued with it until she discovers that the doll has supernatural powers and is evil with a will of it’s own.

This sort of film is right up my alley. It has just the right amount of the occult to make it slightly possible it could happen as well as the right amount of bad acting to give you a few laughs to break the tension. I give it 4 Kitten Stars for amusement value ⭐⭐⭐⭐.

If you are legit looking for pure unadulterated horror, this is not the film for you. If you want a B-Movie horror along the lines of ‘The Blob’ this one is a perfect choice for you.

I want to watch it again at Halloween when the girls are here and watch it with the sound off and each of us pretend to be a particular character and do our own lines. Do you ever do that? The kids do it and they are hilarious. This film is perfect for that!

The concept of this story reminded me a bit of the African legend about the ‘Tokoloshe’. In Zulu/Xhosa mythology a Tokoloshe, (a.k.a. Tikoloshe, Tokolotshe, De’Avion or Hili) is a dwarf-like water sprite.

The Tokoloshe is considered a mischievous and evil spirit that can become invisible by drinking water or swallowing a stone. Tokoloshes are summoned by malevolent people using powerful muti (traditional African medicine) to cause trouble for others. Those who believe in the existence of these spirits will place their bed on bricks, two under each leg. This is because the Tokoloshe is supposed to be small and they can’t climb high. If the Tokoloshe calls your name at night, they come to you in the form of a person in your sleep and have sex with you. Tokoloshes are supposed to be evil creatures that destroy marriages and families.

When my first husband gave me a little American Eskimo puppy that followed me everywhere we named her Tikaloshe. I had no clue about the background of the demon I just thought Tika (my pup) was like my shadow and her white colour made her ghostlike and my South African ex suggested Tika and that became her name.

A lot of the nightly TV series we watch have now finished so we started a few new ones.

Norm and I started watching ‘Sex Education‘ on Netflix.

We had tried to watch this before but one of the opening scenes had made me cringe and we abandoned it but now that a new season is available we decided to give it another bash and it is actually very funny. The lead character is young Otis, the only child of single mother Jean Milburn, a famous sex therapist played by the gorgeous Gillian Anderson. Otis is portrayed by the very talented young English actor Asa Butterfield. Otis falls in love with the quirky independent social outcast and general bad girl Maeve, played by Emma Mackey. Otis’ best mate is the flamboyantly fabulous Eric Effiong, who is gay and comes from a religious Ghanaian-Nigerian family and is played by Ncuti Gatwa. Ncuti has won a BAFTA Scotland Award for Best Actor in Television and has been nominated for 2 other BAFTAs for this role.

We laugh so much while watching this show, it has that wink wink British saucy comedy style which is unique to the UK. I really recommend this series and give it 5 Kitten Stars ⭐⭐⭐⭐⭐. There is a lot of sex and nudity but generally they do not linger on those scenes and it is often shown for the purposes of comedy value (still, this one is NOT for kids as one should expect with that name).

We also started watching the series ‘Clickbait’ on Netflix. This is a weird one. The basic premise is that handsome family man Nick Brewer goes missing and the family receive various videos of Nick holding signs about the horrid things he has allegedly done to women. Nick’s secret life then starts to be unveiled and his family is shattered by the things that come out. Nick is played by the handsome actor Adrian Grenier (formerly of ‘Entourage‘ fame). The main actors are Nick’s sister Pia, played by Zoe Kazan and Betty Gabriel who plays Sophie, Nick’s wife. The other main characters are Emma Beesly, Nick’s alleged mistress who is played by Jessie Collins and Detective Roshan Amiri who is played by the handsome Phoenix Raei. It is full of intrigue. So far it is very good so I give it a tentative 4 Kitten Stars ⭐⭐⭐⭐. They lose half a point for Zoe Kazan’s bad wig.

For musical treats I give you one of my beloved Mahogany Session tracks, this one by Abraham Alexander. The lyrics resonate strongly with me. They speak of homesickness for those of us who live in other countries, the pull of the excitement of foreign cities vs. the comforts of the familiar.

That is all from me for this week. I hope you have a great weekend and week ahead. Please wear a mask when out in public, wash your hands frequently, get the vaccine if you can and stay safe.

Until next time, Kisses from the Kitten xoxoxoxox