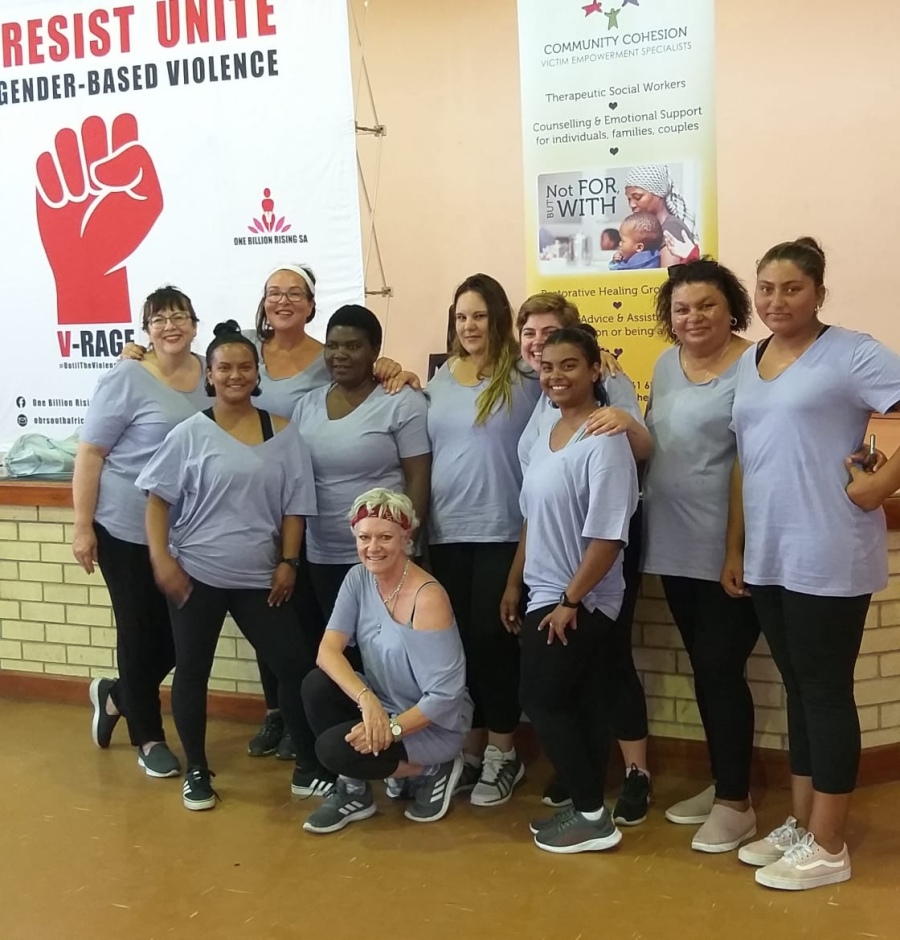 My weekend has been fabulous.

Saturday I was invited to attend a self defense class hosted by Lucinda Evans and the organization ‘One Billion Rising‘.

It was held in an area of Cape Town called Lavender Hill which sounds so pretty and makes you expect to see chocolate box cottages and undulating fields of flowers, instead it is an area which is riddled with poverty. There is a lot of gang violence and many of the residents have experienced various traumas. It is a place which is not very safe for women or children.

One Billion Rising was founded by Eve Ensler and is the biggest mass action to end violence against women (cisgender, transgender, and those who hold fluid identities that are subject to gender-based violence) in human history. The campaign, which launched on Valentine’s Day 2012, began as a call to action based on the staggering statistic that 1 in 3 women on the planet will be beaten or raped during her lifetime. With the world population at 7 billion, this adds up to more than ONE BILLION WOMEN AND GIRLS. These stats are very high in South Africa where there is an average of 114 rapes a day reported. There are many more which go unreported.

There were several NGOs invited to the defense event, one of which was Community Cohesion. My friend Bronwyn is the founder and director and she invited me to come along. There were many women and girls there. Our group all wore purple T-shirts.

It was great to meet Lucinda who is a legendary activist and an amazing woman.

Lucinda was named by the BBC as one of the world’s top 100 inspiring and influential women.

She has been instrumental in rallying South African women to protest, has led nationwide marches and was one of the speakers at the #AmINext protest outside Parliament calling for government action against gender-based violence and femicide.

The defense training was led by Fight Back SA, an NGO that hopes to turn the tide of ­gender-based violence by offering self-defence classes to women and children who are most vulnerable.

Nicole Mirkin is the founder and the NGO focuses on empowering young women and children living in high-risk and crime-ridden areas by providing free self-defence classes at which they teach how to disarm and immobilise an attacker.

It was serious stuff, we were taught how to break out of a grasp if held from behind, how to break an elbow or an ankle of an attacker and how to escape if an attacker is sitting on you and you are being choked.

They told us that if any of the positions triggered us we should feel free to skip any thing we did not feel comfortable with. As my past abuser would choke me to unconsciousness I did not feel I could do that part and so Bronwyn and I just worked around it.

I learned so much about the ways women can fight back. The key is to stay calm and act weak and vulnerable to lead the attacker into thinking they are in control and once they think they have the upper hand to use the skills we learned. It was so empowering.

Today was our drumming circle and we learned a new song which carried through that same message which I took home from our course yesterday.

All women are powerful and hold such strength.

Drumming always energises me and the two events in one weekend has given me such a high!

After the defense class on Saturday we dropped off a few of the girls then we decided to go to Rhodes Memorial for a coffee and a very late lunch as we were starving.

The view is so amazing.

We found a table looking out over the city and ordered a coffee. We were all looking a mess after sweating and rolling around on the floor but we didn’t care.

Everyone except Shirley ordered something to eat. I ordered a Caesar salad.

It had plenty of yummy anchovies.

After we finished eating we walked over to see the memorial.

It clings to the side of the mountain and has steps going down with statues of lions along the sides. The drop off is quite deadly but mad Bronwyn insisted we all do a photo so we obliged by straddling this giant statue and coerced a random dude to take our pic.

We wandered around for a bit viewing the statues and enjoying the view.

We then headed off to drop Shirley and then back to Hout Bay. It was a fabulous day.

I had a shower and washed my hair and relaxed for a bit then Norm was hungry and went to get us food. I had sushi from K1.

I was getting stuck in and the power went off. We had forgotten about load shedding. The power was off from 8-10.30pm and I had to eat my sushi in the dark. It’s hard enough to wield chopsticks in broad daylight and I was a soy sauce laden mess.

We have had load shedding from 2 to 4 hours each day. In this heat it is unbearable to sleep without my fan and our office is so stuffy and hot with no air conditioning.

My week started out pretty rubbish as I got a fine on Monday for an expired car registration. It really annoyed me as I was in my client’s car park and not on a public road. I was sure I had applied for it online but it did not come in the post. When I checked I could not find where I did actually pay so Norm kindly went to the City offices and sorted it for me.

Monday ended on a good note though as Caitlin came for dinner. Norm cooked as I was feeling grumpy and just wanted to zone out. He made chicken breasts stuffed with goats cheese and wrapped in bacon. He roasted sweet potatoes, steamed broccoli and fried garlic mushrooms to go with it.

Last Sunday neither of us felt like cooking and we tried to find a low carb takeaway option. Norm popped down to Massimo’s and picked up some dinner for us. I ordered several items off the meze menu. I had baby calamari, halloumi fries and a side salad.

It wasn’t 100% carb free but it was the best I could think of other than just a salad and I wasn’t in the mood for only salad, I wanted something cooked.

We have been pretty good about keeping low carb and cooking at home.

I made a low carb pizza on Tuesday night. This time we topped it with salami and mushrooms.

On Wednesday I made a Mexican salad. It was basically just tacos without the shells and with extra lettuce. Or so I try to tell my shell loving stomach.

Everything in it is low carb except the salsa.

On Thursday night we had our first AGM for the SRA Norm has been involved in setting up. It was an unbearably hot night.

After the meeting finished we went to Casarecchio for dinner. We sat outside but there was no breeze to keep us cool.

I ordered the Trinchado which is fillet steak in a spicy Portuguese sauce.

I had it with vegetables instead of potatoes and it was divine! So tender and the sauce was delicious.

Friday night we had my favorite salad, halloumi and bacon. I made home made salad dressing with garlic, onion, avocado and creme frais. It was so yummy and perfect for the hot weather.

Today after drumming the electricity was off so Norm and I decided to go out for a late lunch. We were not sure where we were going to go and drove down to the village but at the last minute we decided to go to Hout Bay Manor. We walked in and saw our friends Mel and Cyril were also there and so we joined them. It was lovely to see them.

They were there for cake and coffee but Norm and I wanted food so we both ordered the Chicken Caesar salad. Service was abysmal instead of their usually brilliant service. It took almost an hour to get our water which arrived at the same time as our food and only after Norman went inside to complain.

It was very tasty once it finally arrived but I missed the anchovies.

After chatting for ages with Mel and Cyril we headed to the shops to get something for dinner then we came home to relax.

The weekend has hurtled by and I’ve had very little downtime. I hope I cope with work as we are under a lot of pressure. I’ll just have to throw a few naps into my schedule.

I hope you have all had a lovely energizing weekend as well and that your week ahead is peaceful and productive and drama free.

Until next time, Kisses from the Kitten xoxoxoxo