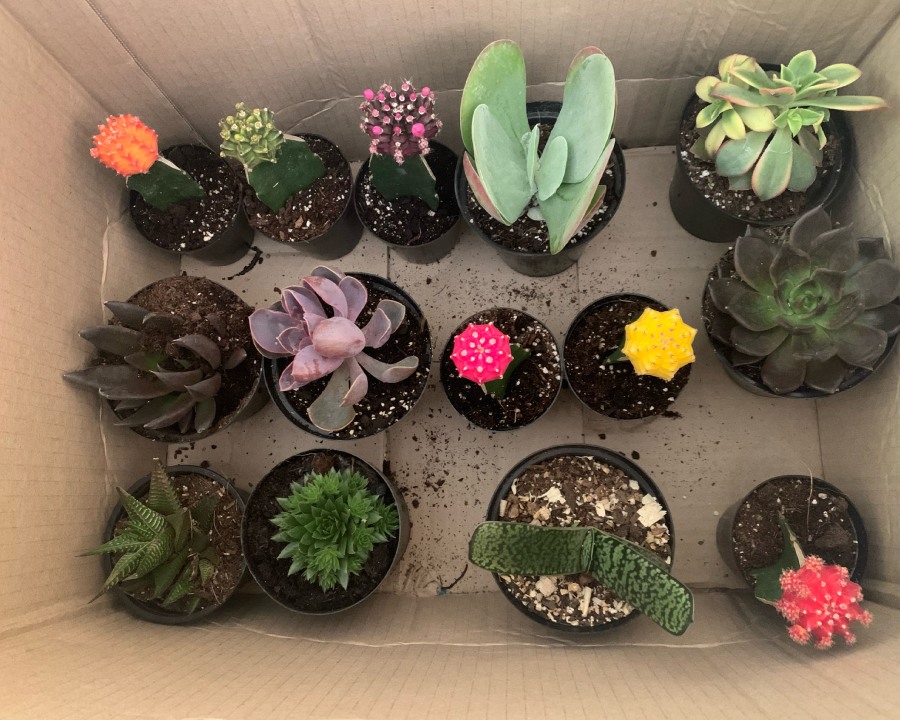 At midnight on Wednesday the corrupt former president of South Africa, Jacob Zuma, turned himself into the police after weeks of nonsense. Last week, the Constitutional Court found Zuma guilty of contempt of court, in relation to an order to appear before the State Capture Inquiry. The apex court sentenced him to 15 months in jail but we will see what happens as the ANC is incredibly corrupt. Just to clarify this event weighs in on the side of ‘good’ events!

Last Saturday we picked up Navajo’s ashes from the vet. It was sad to see them but it also gave me a feeling of comfort to have him back home with us. We are still missing him so much, he was such a bright energy in the house.

Pixie and Panda are finally eating after a week of picking at their food and looking miserable. Pixie is still very confused by everything going on in the house, builders traipsing in and out, lots of noise and chaos, the moving around of furniture and no weekend lie ins in bed with mommy tickling her tummy. Panda is loving the chaos, he has to check out everything and everyone, Norm calls him the building supervisor.

A funny thing happened on Monday. Our builder Mark has 2 Swiss Shepherds, Hunter and Harley (not named in a Kardashian sort of pattern, he had Harley before we got Navajo and recently rescued Hunter and kept his name.) Hunter came from the same breeder as Navajo and they are physically so alike I do a double take when I see him and my heart stops a wee bit. We were standing outside with Hunter roaming around the garden and a robin flew into the garage and landed nearby and looked at me then flew off. Hunter then ran up to me jumped up on his back legs, wrapped his legs around me and hugged me then kissed me right on the mouth. I felt it was a message from Navajo, a hug for his Mom. I thought about that all day and night. It was as if my ancestors spoke to his ancestors and agreed a plan to comfort me.

But we have to move on as sad as we may be. I have started enquiring about a new pup as we need a big dog for security reasons and we love the Swiss Shepherd breed. I asked my ancestors to send me the dog that is right for us and then another odd thing happened. I had a list of breeders and I picked one at random despite her being in another province. She told me that she has a female in heat right now and should have a litter available in November. This is not the odd part, the father is named Robin and the mother is named Sparrow! My bird connections again. I feel like this is the universe telling me this litter is going to contain our pup.

The 4th of July is a big holiday in the US. As a Native American I do not celebrate that day as it also marks the day in history when many indigenous people were murdered as do so many days since. More and more unmarked graves and horror stories are being brought to light about the treatment of indigenous children in North America by the church.

The 4th of July marks the date when my Dad passed away 36 years ago. I was newly married and living in Los Angeles when my Dad had a major stroke. He was only 49 years old. I had just lost a baby 3 months before that. I flew to Georgia to see him but he was only vaguely aware of me being there. He did remark on the fact that I had chopped off all of my long hair. After he died I fell pregnant again shortly thereafter with my son Trevor. Trevor is definitely a soul return of my Dad, they are so alike in so many ways it is uncanny. They look a lot alike, they have a mole in the same spot on their face and they have the same sense of humour and intelligence.

The 4th was also the day when I received my first vaccine for COVID. I felt no symptoms on the day but had a very sore arm and neck the following day. However the security that the virus gives me is so worth any minor twinges.

I will get my 2nd jab in 6 weeks and 2 weeks after that my immunity should be as strong as it can get. The timing just so happens to be the weekend before my 60th birthday and Lily is coming down for the weekend. I hope Trevor can too but he works a lot of weekends and may not be able to get off work or find a cat sitter. I could not ask for a better 60th birthday present than to see my kids.

The vaccines are opening up for the over 35 year old South Africans on the 1st of August so Trevor will be able to get his vaccine.

When we got home from the vaccine centre Norm moved all of our furniture back to our bedroom and emptied the other 2 bedrooms for the next day’s renovations to start. Mostly what they are doing in these rooms is put in new flooring and to paint them.

But when they opened up the wall in one room to add an electrical outlet they saw the wiring was not up to code and so they had to do some additional work. Luckily our builder is ethical and did not just patch over it.

This is the status after that day’s work.

They have now poured the self leveling for the new bedroom flooring and done more work to the walls. The floor on the landing is now complete.

I am now showering in the new shower and it is divine. They are coming on Monday to install the new quartz counter top and the joiner is coming this week to finish off the vanity.

I have ordered a set of bathroom accessories in white ceramic which should look lovely in the new bathroom. I just need towel rails and we will be sorted.

Monday was mine and Norman’s 24th wedding anniversary. It does not feel like it has been 24 years until I see how young we looked in our wedding photos.

After so long together we do not exchange presents but it just so happened that a parcel I had ordered from Rusty Rose Nurseries arrived and so I pretended it was a gift.

‘Mr Brains’ came with the quirky succulent already planted and it is perfect for him!

I have been forbidden from putting cheesy kitsch gnomes in my garden as Norm cannot bear them but I ordered these cheeky little cuties which are technically not gnomes and he does not seem to mind them. But that could just be because he was trying to be nice on our anniversary.

I also ordered some flowering cacti and some other succulents. (Yes I know I had supposedly stopped ordering plants but I had new pots so I needed something to put in them, right?)

I guess I could have worse addictions than succulents. #CrackIsWhack

Then that evening Norm popped out and came back with some beautiful proteas for me and some chocolates!

For our anniversary dinner I treated us to the Yum Cha menu from Cheyne’s. As the SA restaurants are closed for dining in it was delivered. With Yum Cha you can choose any 4 items from the menu.

I chose the chili salt squid, with sesame mayo and green chili caramel.

For my last savoury option I chose the Baby Back pork ribs, with sweet yakiniku glaze and toasted sesame. These were so delicious I could have eaten about 10 more of them!

We had a rest before we had our desserts as we were quite full (despite my wish for more ribs, that was my mouth not my stomach talking). I ordered the vanilla crème brulee with miso ice cream and Norm ordered the Fuji apple crumble, apple caramel and peach ice cream. We munched on that later while watching telly and I forgot to take pics.

We started watching ‘Sex/Life‘ on Netflix after we heard everyone raving about it. Much like the furor which surrounded ‘50 Shades of Grey‘ if you have led a narrow life of bad vanilla sex then this might be an eye-opener for you. It is not very well acted or scripted and the sex is just sex. It is about Billie, played by actress Sarah Shahi, a woman whose life is thrown into chaos when Brad, an old flame (played by Adam Demos), comes back into her life. The series also stars Mike Vogel as Cooper, the husband and baby daddy who discovers his wife’s journal describing her antics with Brad and instead of getting angry he tries to live up to the challenge.

I am a bit half hearted about this series, let me know what you think. I have only seen 3 episodes but so far it gets at most about 3 Kitten Stars ⭐⭐⭐.

As we finished ‘The Last Kingdom‘ we stuck with the same sort of genre and started watching ‘Vikings‘. It is the tale of the life of Viking Chieftain Ragnar Lothbrok and his wives, children and raids. The series begins at the start of the Viking Age, marked by the Lindisfarne raid in 793. Like the Last Kingdom is is very violent and bloody so I end up averting my eyes a lot. Ragnar is played by Travis Fimmel. I did not realise that Travis is the same beautiful young man who was a Calvin Klein model almost 20 years ago. He is and was a gorgeous looking man.

Ragnar’s first wife is Lagertha who is played by Katheryn Winnick. Ragnar ends up getting involved with a young princess named Aslaug who is played by Alyssa Sutherland. When Aslaug shows up in his village carrying his child Lagertha buggers off with their son Bjorn. Ragnar and Aslaug set up house and end up having several sons. Bjorn returns to find his father and the adult Bjorn is played by the actor Alexander Ludwig. We are about at this point right now. I am enjoying it but it is not really my cuppa tea, I watch it because Norm enjoys it. There are a lot of attractive people in it and I enjoy the costumes.

I am a bit late posting today as I have been cleaning our bedroom and bathroom, tidying up the stuff that had drifted all over the house and battling the insane levels of dust. Tomorrow I will do a bit of gardening as I have my new succulents and cacti to plant. If I have any energy left after that I might do a bit of painting. At least it has stopped raining, the weather has been freezing cold and blustery. It was lovely to see a bit of sun peeking through today.

I hope you have a lovely weekend.

Until next time, please stay safe and if you are able to do so, please get vaccinated.

Kisses from the Kitten xoxoxoxox

One thought on “Event Full.”