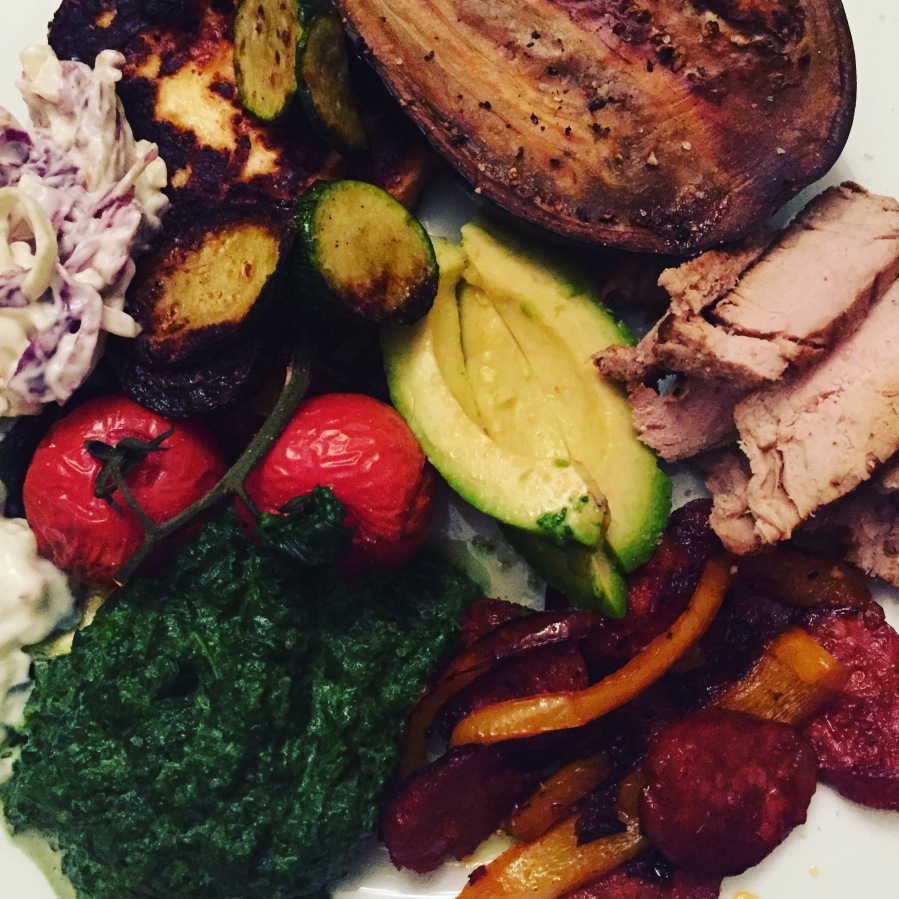 This week has been very heavy going for me emotionally. My heart is heavy with sadness and uncertainty.

Once again this week we have had protest action in Hout Bay. Starting on Tuesday there were roadblocks and riots going on in Hangberg, the opposite side of the Bay from where I live.

The protest was in relation to an announcement last week by the DAFF (Department of Agriculture, Forestry and Fisheries) that rock lobster quotas would shrink further this season. Many of the residents in Hangberg are fishermen. Other residents were protesting about ongoing service delivery problems and issues with communication between their community and the City of Cape Town.

The Hangberg protests started on Tuesday and carried on most of the week. 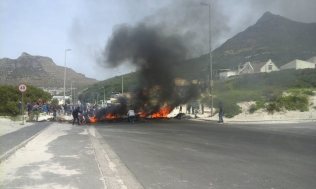 As with most scenarios where there is a lot of chaos and confusion there was a big debate about exactly what happened between the police and the protesters.

Many people were saying that the police were being incredibly restrained in their approach, while others were saying that the police were firing at ‘the innocent’. I am not sure how you feel but if I was innocent and somehow found myself in the midst of a protest and the police arrived I would make my way home and try to avoid any trouble. For the protesters to call themselves innocent is a bit of stretch. They were clearly seen stealing property such as picnic tables from the neighbouring restaurants and setting fire to them in the streets.

The tables were sometimes used as shelter from the water cannons and rubber bullets that were fired at the protesters. 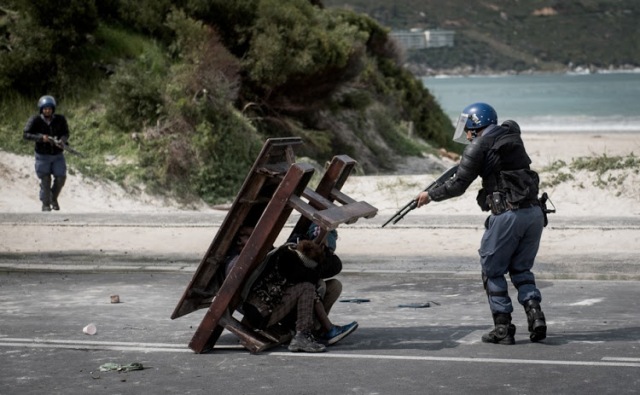 The video below was filmed by Tin Dwarka who was on the scene. It is difficult to watch.

Very quickly after it happened a journalist had posted an article stating that the police had shot a child in the mouth. Then many of the people on our local Facebook group started asking ‘what was a child doing there?’ or ‘why wasn’t he in school?’. These sorts of comments are to me the moral equivalent of asking the rape victim what she was wearing when she was raped. There are no bad children, only bad parenting. The boy’s parents were possibly participating in the riot and he followed suit.

However the claims of innocence by the majority of the protesters and their attitudes that they were the victims in this scenario were ridiculous as there is footage of a bus full of tourists being robbed by the protesters during the protest. How does that represent your cause?

Tourism in Hout Bay is down due to the news reports of our ongoing protest action and many of the residents of Hangberg will be employed by the tourist industry, so how do they not make the connection that they are only hurting themselves?

Later that night we heard on the Neighbourhood Watch radio that the protesters had resorted to looting and were doing damage to the nearby businesses. They broke into the Hout Bay Harbour Market as well as the other businesses nearby. They broke the windows out of local restaurant Fish On The Rocks.

It all seemed out of control.

On Tuesday evening we sat listening to all of this on the Neighborhood Watch radio and I made chicken Stir fry with spinach low carb noodles. It was yummy. I fried the chopped chicken and once browned added in lots of sugar free peanut butter to some chopped chili, soy sauce and coconut oil. 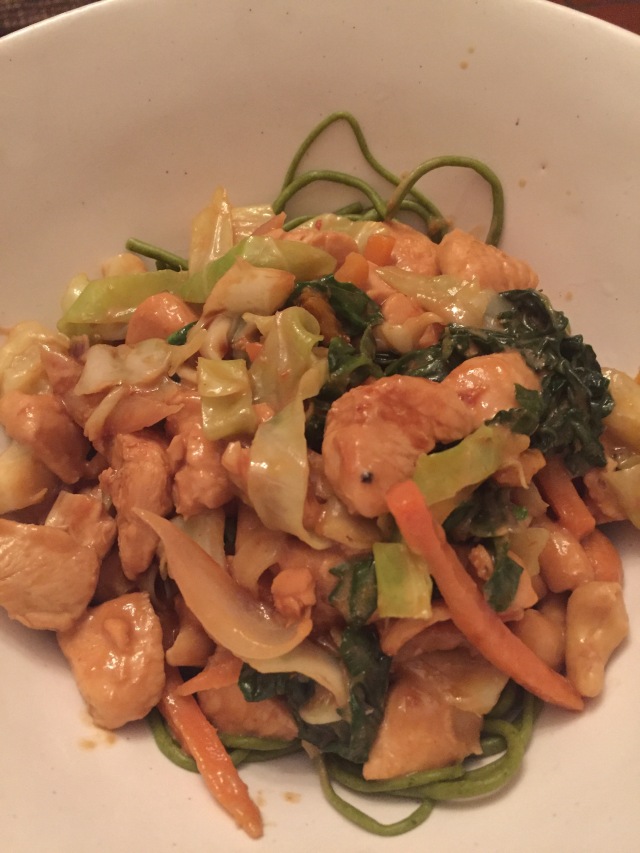 I’m trying to stay low carb and drop those kilos I picked up.

We woke on Wednesday at 6am when our house alarm went off as the city was putting in a new electricity supply of some sort in our neighbourhood. The power going off triggered the house security alarm which triggered the dogs going insane. We were without power for 12 hours. Luckily I was working so it didn’t impact me too much other than getting dressed for work in the dark. Have you ever put on mascara in the dark? I didn’t attempt my eyeliner.

The protests carried on all of Wednesday and Thursday. Houses were broken into and property was looted.

The protesters were shooting off flares, one of which landed on a boat in the harbour. 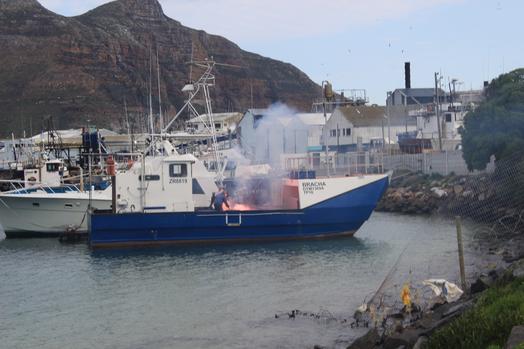 When I got home on Wednesday the power was still off. Once our electricity came back on that evening I started making dinner. We had fillet steak I marinated in balsamic vinegar, lemon, Worcestershire sauce and soy sauce. It was so tender it barely needed to be chewed. I steamed gem squash and fried cabbage and mushrooms to go with it.

I noticed that my birthday flowers are blooming. That is what I love about lilies, they change daily and last so long. This pic is almost 2 weeks after my birthday.

On Thursday night we had an ‘everything in the fridge dinner’. You know when you have lots of little bits left at the end of the week but not enough of any of them to feed three people? A few spoonfuls of this and a few spoonfuls of that, throw in an aubergine and you’re good to go.

We sliced the left over fillet steaks, fried the left over zucchini from the lasagna earlier in the week, roasted baby vine tomatoes in garlic and balsamic, creamed spinach, baked some aubergines, sliced up some avocados, made the last bit of cabbage into cole slaw, chopped up the remainder of a cucumber and made tzaziki, grilled halloumi, and fried some yellow peppers with sliced chorizo and it was a feast! All of the items went so well together. 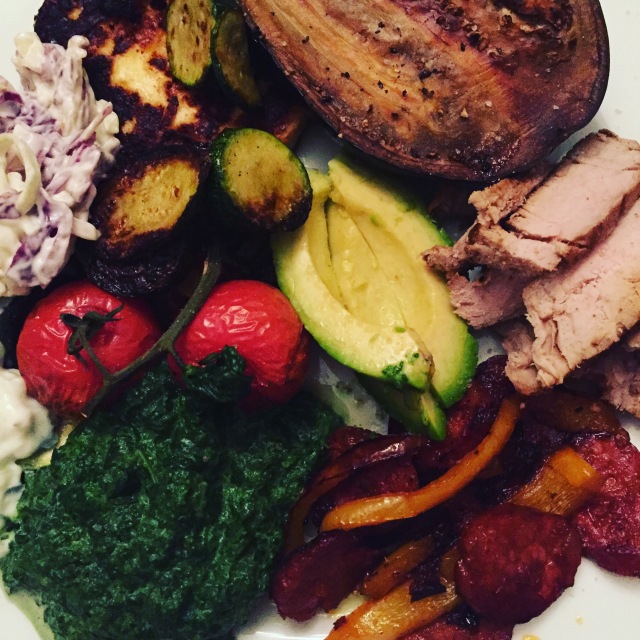 There was enough left for me to bring to lunch Friday which meant I wasn’t tempted to use orderin.

The protests in Hangberg seem to be over. Friday I read that a truce has been brokered between the Hangberg rioters and police after a meeting with MEC Dan Plato.

I then heard at lunch time that there had been a terror attack in the London underground. Luckily the device did not fully detonate and no one died. It’s getting so risky to be in Europe just living life. They arrested a suspect but the chances are there will be another coward willing to sacrifice themselves for their misguided cause. But if you think about the risk then the fear could paralyze you. If you let this stop you enjoying life then the terrorists have achieved their goal.

It’s been a sad weekend for me as Caitlin has moved out. That’s my last baby now moved out and independent. The renovations on her flat are mostly done. She has some cupboards to finish painting then she’s all done but she decided to stick with her plan as she had booked the movers for early Saturday morning and so she moved her furniture and slept her first night there last night.

I was up early too as Pixie and I were off to Noordhoek to the Chiro.

Afterwards I came home and Norm made us a yummy HFLC breakfast of cheesy scrambled eggs, crispy bacon and avocado.

We headed out in the afternoon to view more potential houses. We saw 3. I loved one of them but it’s massive. 5 bedrooms and a huge garden with a large pool and a koi pond. Norm thinks it is too large for us. We are supposed to be downsizing.

We also saw a cute small house but he thinks that one is too small.

It’s like viewing show houses with a Scottish Goldlocks. Hopefully we will find one that is ‘just right’.

Norm and I popped by Caitlin’s flat after we finished viewing houses. First she came home and we filled up her car and Norm’s truck with her desk and last bits and pieces and hauled them over. It is really a lovely flat now. She changed everything about it and did most of the work herself. She should be very proud of her efforts.

But now my nest is empty. It makes me sad.

After we left an exhausted Caitlin at her flat we were starving so we stopped off at Primi Piatti for dinner as it was on our way home.

I had a naughty Dacquiri.

We stayed as low carb as possible with our food choices however and had fillet steak in a creamy mushroom sauce and substituted the lower carb mashed butternut and sweet potato instead of normal mash. 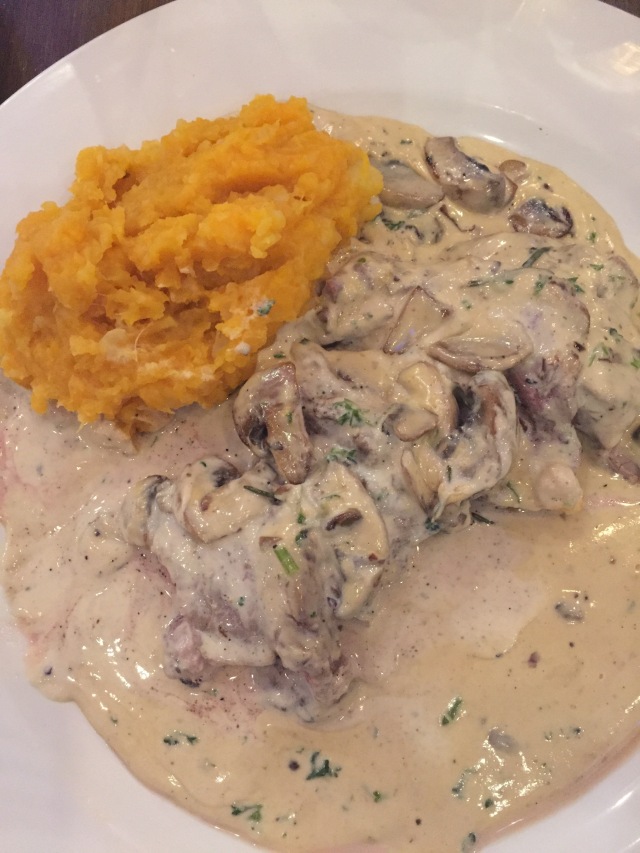 It was delicious and after we came home, we watched an ep of Sons of Anarchy which is my new addiction. We hadn’t gotten into it before but now we can stream we have started from the beginning. I am hooked!

We have several more house viewings today. This whole exercise of house hunting and moving is very stressful. The nice ones go fast. I’m comparing them all to my current house and they all come up short in comparison. I love my home.

We just need to keep looking. The one that is meant for us will be found eventually.

I just need to focus on the present and keep my eye focused on the prize.

3 thoughts on “Teach a Man to Fish”