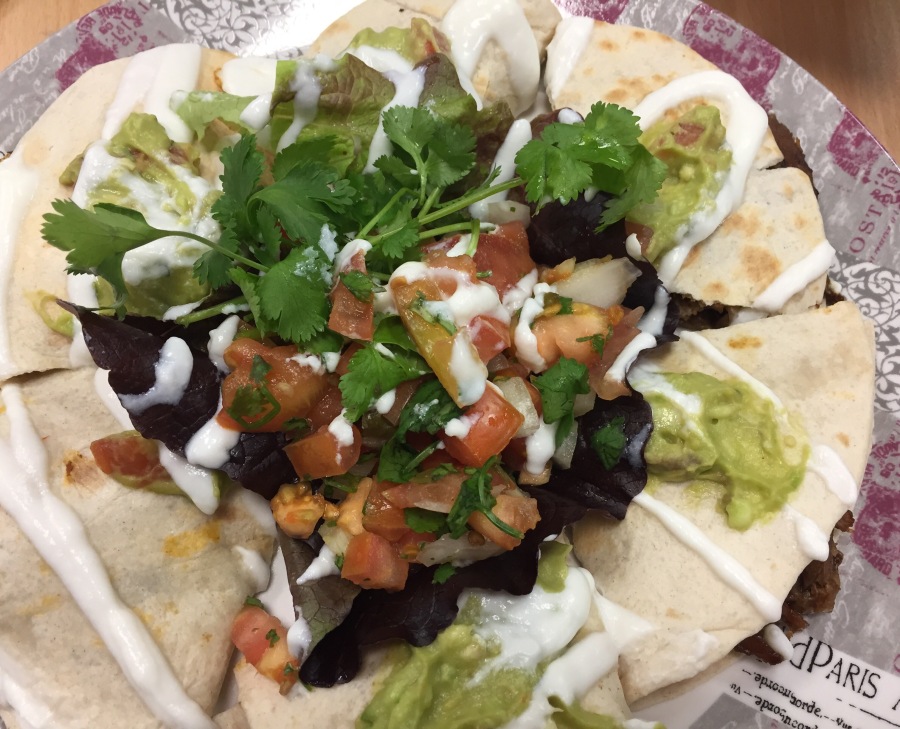 I had such a stressful day at work on Thursday. I am usually part of a team, working with a technical resource who does the data extraction and performs the assessment and I get the output for Quality Assurance. However my current client does not have anyone to fulfill this role and I spent all of Thursday trying to download their analysis tool, connect to the database and get extracts for analysis. It was incredibly frustrating as no one was willing to help me or give me the info I needed to be self sufficient. I left work with my data eventually but my stress levels were off the chart.

When I got home Norm told me he had shopped and was cooking for us all and I was so relieved,

He made us a tasty low carb dinner. He made fillet steaks, grilled halloumi, roasted veggies in the oven, steamed cauliflower and then topped it with cheddar cheese and popped it under the grill. It was so delicious.

It was so delicious I didn’t have any left for my lunch on Friday. There is no canteen on site and it was pouring with rain so I decided to stay put and use OrderIn delivery service to get some lunch. The closest place to me was Fat Cactus. As I love Mexican food I decided to order the pulled pork quesadillas and some chilli poppers.

It arrived hot and relatively quickly. I’m so impressed with their service. The food was really yummy. The pork was full of flavor and not at all fatty.

We had a quiet night in on Friday and just stayed home and wrapped up to avoid the cold and rain and Norm built us a big cozy fire.

We have finally finished all of the episodes of our addiction Breaking Bad and now we are watching the spin off ‘Better Call Saul’.

When we woke on Saturday morning Norm saw on the local security group that there was chaos in Hout Bay. The weather is freezing cold and damp and the people who have been displaced by the recent fire in the informal settlements were blocking the roads and hurling bricks and setting things alight to protest the fact that no progress has been made in returning them to a more permanent home. They have no electricity or water in their temporary shacks. They have to use portable toilets and communal showers. They are saying that some of the plots in the area recently cleared by the fire have been given to people who are not even on the list of original residents who were fire victims. The City of Cape Town had asked for patience while they reblocked the area but the field where they are housed is now flooding due to the recent rain. According to someone who spoke to a person at the scene, the protesters were setting up for a demonstration early Saturday morning when some guy trying to drive through swore at them for blocking the road and apparently pulled a gun. The protesters threw rocks at him and things escalated from there. 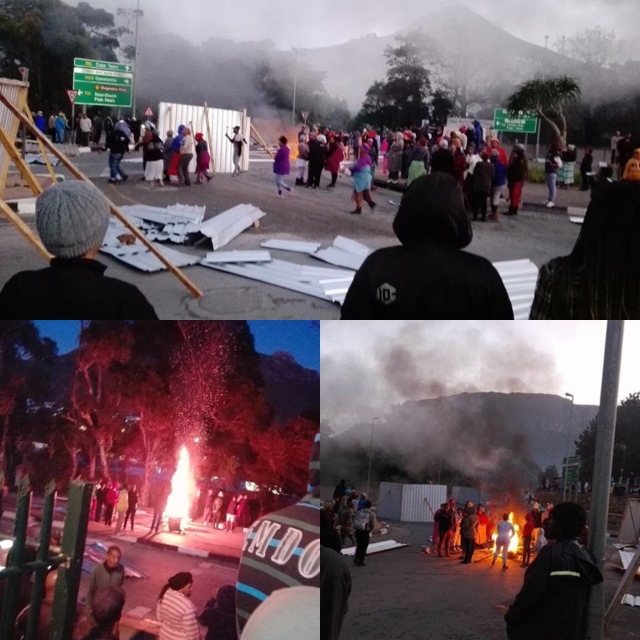 We did not have to go out that morning so we stayed in, listening to the sirens and following it all on the Neighborhood Watch radio.

Later around lunch time we heard the roads were open and Caitlin headed out to the northern suburbs to a friend’s baby shower.

I decided to make pancakes and bacon for brunch for Norm and I. There is no stressful situation that can’t be improved by pancakes. 💕

Norm and I were booked to go out last night to one our favorite Cape Town restaurants, La Mouette. We were not sure if the road was open via the village so we took the long way out via Constantia.

We were seated in the front room near one of their roaring fires.

We ordered the Winter Special at R295 per person.

Norm was happy with the carafe of wine which came with the Winter Special as was I. I didn’t catch what label it was but it was a really tasty Sauvignon Blanc and wasn’t too acidic.

The first course was the infamous cheese croquettes with a smoked aioli. These are so heavenly. The cheese is warm and liquid, the coating crispy and the aioli the perfect accompaniment to the smoky cheese filling. 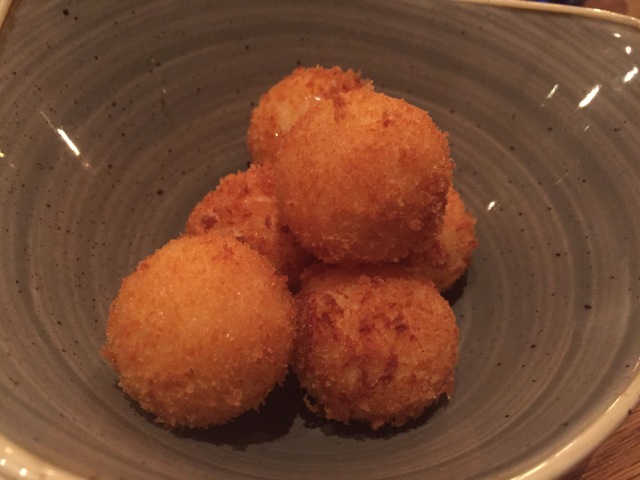 The second course was Butternut Soup. It was served with a bowl of the accent flavours and the soup is then poured over the Parmesan, shiitake mushrooms, croutons and beurre noisette crumb by the waiter. The flavours all popped and it was such a gorgeous combination. 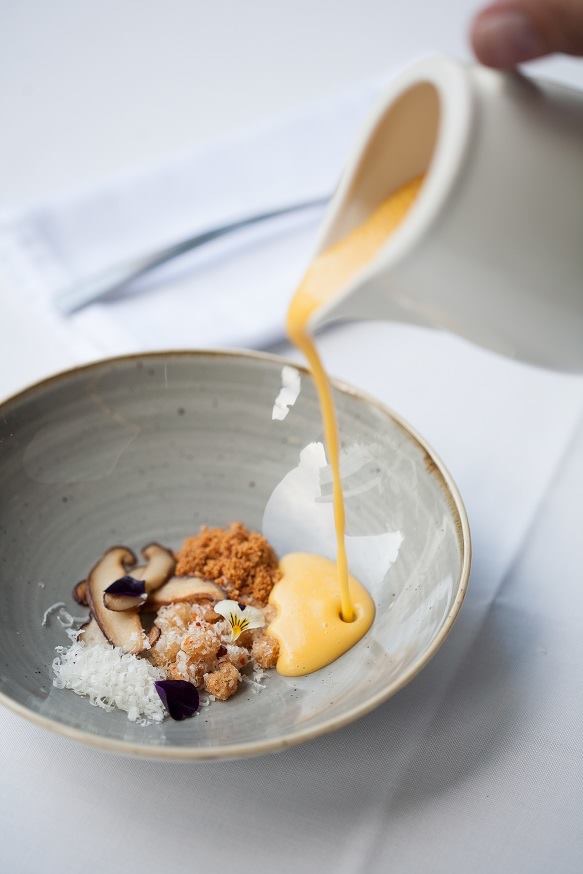 The Main Course was Roast Chicken, served with purée of root vegetables, crispy kale and triple cooked potatoes. A little pot of chicken jus was poured over at the table when it was served. This chicken was so tender it melted in your mouth. 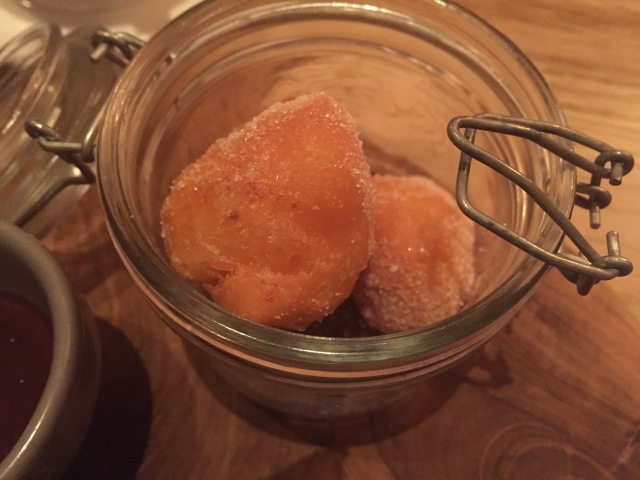 You opened the pastry and spread it with the praline cream and then dipped it in the sauce. I could have eaten a dozen of these they were light and the flavours so tasty. The meal was perfect for a cold winter night. We had a lovely evening.

When we left we reminisced about all of the parties we have attended there sitting around the lovely old fountain in the courtyard.

Driving home we decided that we would take the shortest route as we had heard the roads were all clear. However we saw lots of debris from the fires and lots of broken glass and rubbish littering the roads. As we passed by the main protest area our car started making a very odd noise, like it was dragging something. It was too dangerous to stop there so I was panicking that our tire was punctured but we kept driving. When we went over a speed bump the noise stopped. When we got home we could see nothing untoward so we are unsure what the sound was.

We saw later that night that there was a group of 20 or so people out throwing bricks and stones in that same area where our car had issues and a guy had his side mirror knocked off his car when they tried to put a brick through his window. We were lucky we got through safely.

Today the protests started back up causing the village once again to shut down. There are only 3 routes into our village. One is shut due to landslides from our recent storms, in the protest the traffic lights were all damaged and the roads blocked on the coastal side of the village and the other was also blocked by protesters so all routes in have been compromised for two days. For those of us who have contributed to helping the victims of the recent fire by donations or financial contributions it is hard to understand. But then we have never had to sleep in a cold, damp metal box for months on end. I don’t think we ever can understand it. Our lives are worlds apart. The meal we had last night is more in cost than many people make in a day’s wages. We are part of the privileged few, educated, employed and earning a decent wage to enable us to buy our own warm, dry homes.

I hope the city now speeds up the rehousing of the fire victims, these people have suffered so much already.

Late this morning I made brunch for me, Norm and Caitlin. I made cheesy zucchini fritters. 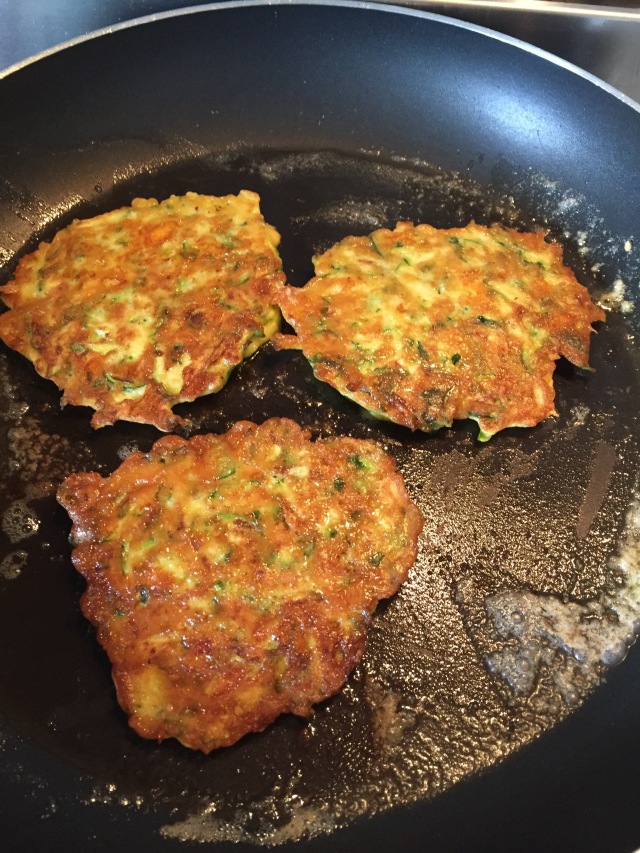 I made bacon and eggs and served it with avocado and rosa tomatoes. 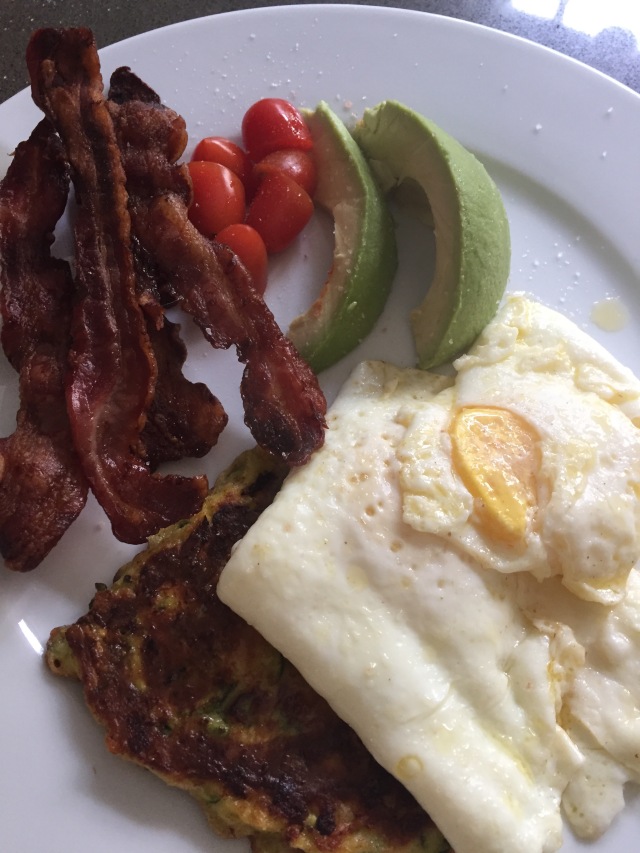 We are now relaxing by the fire and Norm is busy on a bid for some work and Caitlin is painting her tables for her new flat. We have a busy week ahead so I’m having down time.

I wish you all a safe week ahead.

One thought on “Worlds Apart”