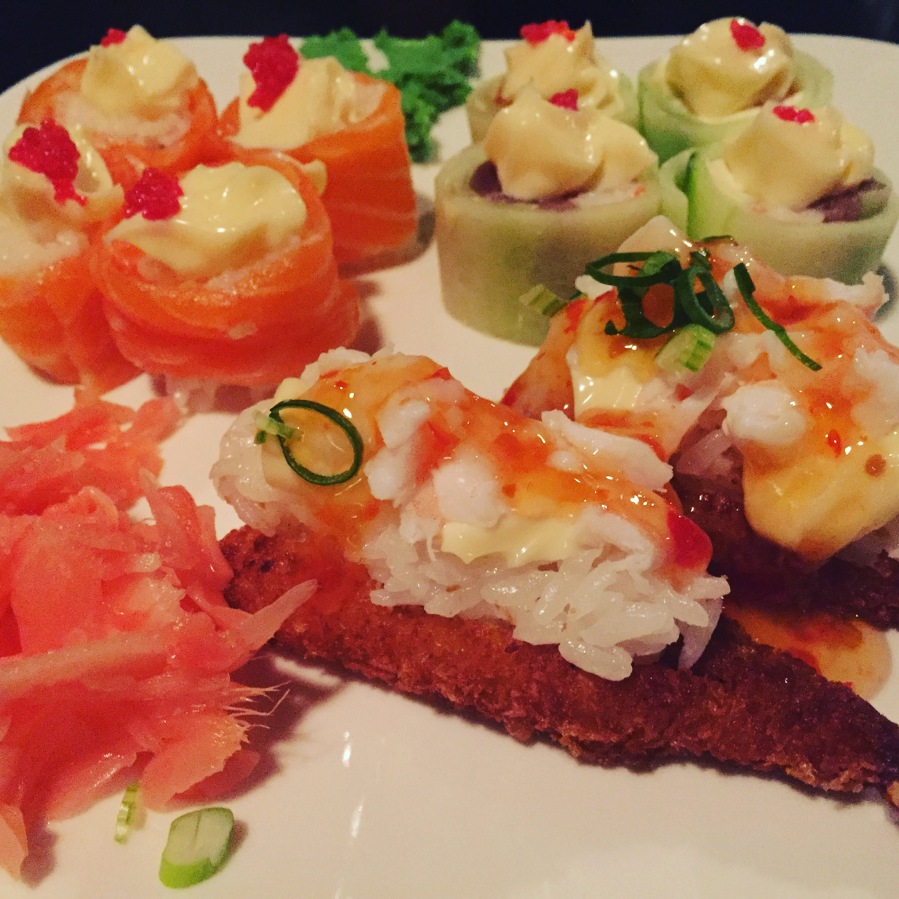 A ‘normal’ two day weekend always seems like you are being short-changed when it occurs after a lovely lush long 4 day weekend of fun. But at least I had a nice one even if it was a short run. We only have a 3 day work week again this week as Thursday & next Monday are both public holidays and I have taken leave for Friday. So I get a full 5 days off by only using up a day of my annual leave allocation. Lily and Josh are coming down for the long weekend and I am very excited to see them. I love having that energy in the house.

Caitlin and I had planned a Mommy – Daughter night on last Saturday evening. Caitlin had gone off to volunteer at a local home for the disabled in the township very early on Saturday morning. She went with some friends and the group treated the residents to a Movie Day. They showed the film ‘Shrek’ and they took juice and popcorn to hand out to those who wanted it. Caitlin said it was so rewarding as the residents all were having such fun and were so appreciative of the efforts the visitors made to give them a treat.

On her way home she ended up getting stuck in traffic due to a truck that had turned over. The truck was carrying sand which ended up spilling all over the road and that all had to be cleared before they re-opened the road, it took over 2 hours for Caitlin to get through it.

Caitlin had suggested we go to a sushi place she often visits with Wes as it was on our way to the cinema. Trying to find their info to link on this blog was very confusing as on Facebook it seems to be called ‘Tai Chi Restaurant’ and on the SMS sent with the payment info from the bank it is called ‘Nihao Kitchen’. The sign outside says ‘Sakura’ as that is the parent company I think so look for that on the building window if you decide to try them out. Regardless of their identity crisis, it is my fave new spot. They were quite busy as they have an ‘All You Can Eat’ buffet on Saturday evening.

We were lucky to nab a table and we settled in to decide what we fancied.

I have such a beautiful daughter don’t I?

We just ordered off the ala carte menu as we knew we were going to have snacks at the cinema. Much of the Sushi was half price.

I ordered the salmon roses, the bamboo rolls and the open prawn tempura. It was all delicious and all half price. Our entire bill for both of us was only R280.

We finished up a bit early to go straight on to the cinema but as it was so busy we did not want to hold the table just to chat and faff about so we decided to drive past Caitlin’s flat she has made the offer on. It is such a handy location for her, it is only 4 kilometres to her office so she could run or cycle to work easily. I am so excited for her, she will have that flat so nicely decorated as her room is packed so tightly with all of the furniture and kitchen items she has been buying, refinishing or receiving as presents and saving for filling up her own place. Once she moves out and takes it all with her the style level in my own house will decrease by about 50% as all of the cute (e.g. ‘coordinated’)  stuff is hers. None of my own stuff matches or is even of the same style. I easily mix Chinese style with my South African and North African Art. There are even a few Moroccan pieces and a didgeridoo that Norm bought for me when he went to the Australian Olympics thrown in for good measure.

It works for me – almost all of the pieces I have in my home are linked to a memory of a place or a person. Whenever Norm and I travel we always buy a small piece of art from our trip. We have art from Italy, Paris, Spain and many of the other places we have been.

After our little excursion we went to Blue Route to the cinema.

It was pretty busy so we got our snacks and went to find our seats. We only had a few minutes to wait before the film began luckily. We had chosen the 815pm showing hoping that this would mean no noisy children but the place was still riddled with kids. Luckily the film soundtrack was so loud that even I could hear it and it muffled the noisy kids as well as the woman to my right with the rustling packet and the 2 women to Caitlin’s left who chatted in Chinese non-stop. Caitlin said there was a guy singing full voice behind her who was tone deaf but luckily he must have been in a key my ears no longer register.

There are some benefits to old age.

I absolutely adored this film. Our family are huge Disney fans, but this film surpassed them all. I was not sure how Emma Watson would carry off the singing but she has a lovely clear tone. She is such an intellectual that it is easy to imagine her being seduced by a library. (Yes, BY a library, not IN a library, that was Gone With the Wind where Scarlett was first intrigued by Mr Butler’s cheeky demeanour in a library.)

I have to say my favourite character was Lumière who was played by the lovely Ewan McGregor. I did not read up on which actor was providing the voices for which characters so I was not influenced by WHO was playing but rather by the skill they applied in the part. Lumière had a fabulous French accent and I loved his singing voice. The fact that Ewan’s wife was born in France maybe gave him a better ear for the role but I had assumed it was a French actor doing the voice.

But heck, I am a Yank and think Pepé Le Pew sounds legit. 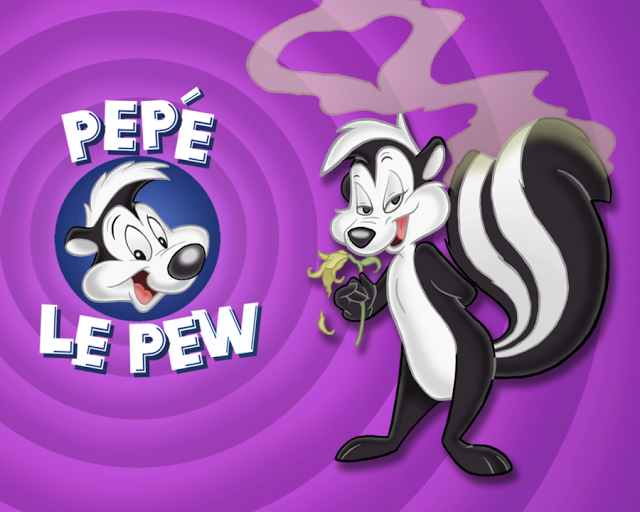 Luke Evans was playing the role of Gaston, his cheeky grin and insolent eyebrow made him perfect for the part.

LeFou was divine. The microsecond long scene where LeFou danced with another man was over so fast as to be barely noticed other than by the hawkeyed oppressed conservative nut jobs who boycotted the film. To focus on that second rather than allow your child to absorb the magic of the film is short sighted and sad to me.

We both absolutely loved the film.

The next morning it was again incredibly hot. Caitlin was off out for the day but took time to show me how to use Snapchat so we could send a silly pic to my Mom. Don’t look too closely behind the mask as we had both just woken up. 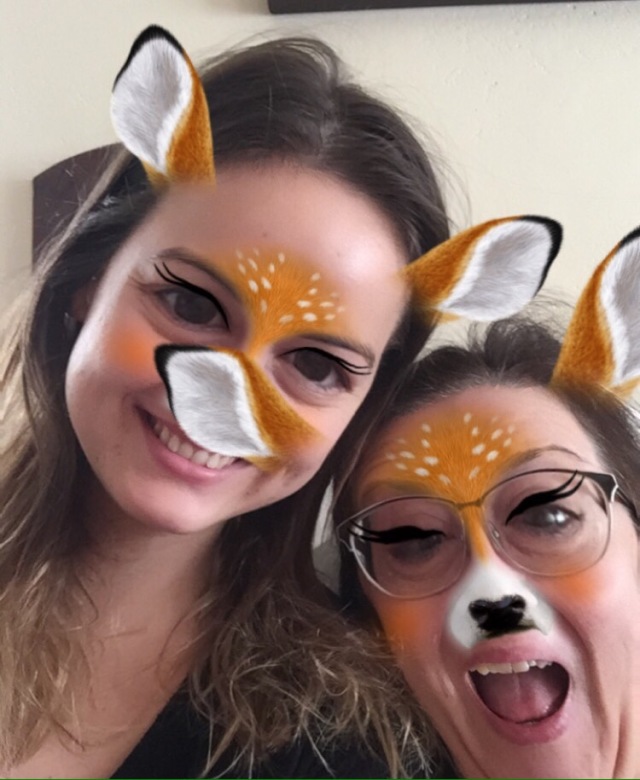 It was such an incredibly hot day, the dogs kept trying to find a spot with a breeze to keep them cool.

Norm and I got a bit of cabin fever later in the day and we decided rather than attempt to cook in the heat, we would rather go out for a late afternoon visit to Woodcutters Arms Pub in Hout Bay.

It was a bit windy in the beer garden so we grabbed a booth inside the pub.

Norm loves their Scotch eggs and so he ordered that for his starter. It was wee bit overcooked as the yolk should be runny, but he still enjoyed it. 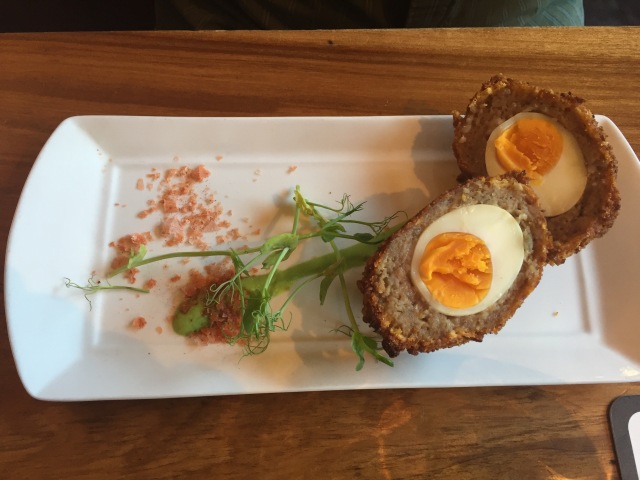 We are nothing if not predictable as I also ordered my own favourite of their starters, the Jalapeno Cigars, phyllo pastry stuffed with chopped jalapenos and cheddar cheese.

For his main Norm had the Fish & Chips with mushy peas and tartar sauce. It was a nice fat piece of fish and he enjoyed it. I love mushy peas and would have wanted a bit more than that tiny puddle, but Norm is easier to please than I am. 🙂 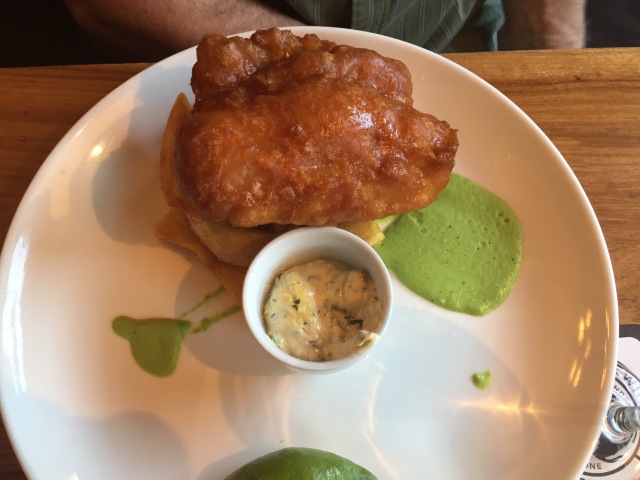 I ordered the Cajun Chicken Burger with chips. It had a spicy jalapeno mayo on top and a few crispy onion rings. It was yummy yumm yumm. The chips were spicy and nice and crispy on the outside.

We’ve decided our Sundays should be spent like pensioners, eating our main meal at 4-5pm. What they call the ‘Early Bird Special’ in many places. Eating that late means you aren’t hungry for an evening meal. Not that we are avoiding meals, I just like my Sundays to be as lazy and responsibility free as possible. 🙂

On Monday Caitlin went to the courthouse to support her friend Carl‘s family during the sentencing which was supposed to occur. Those of you who are regular readers will know that Carl was murdered by 2 local thugs due to mistaken identity. The sentencing has been dragging on now for weeks. It was postponed again yesterday until the 15th of May. Let us all hope that justice will finally be served and Carl’s family can start to move forward with their lives as best they can.

Please keep Carl’s family in your thoughts and prayers and hold your own babies close and tell them that you love them.