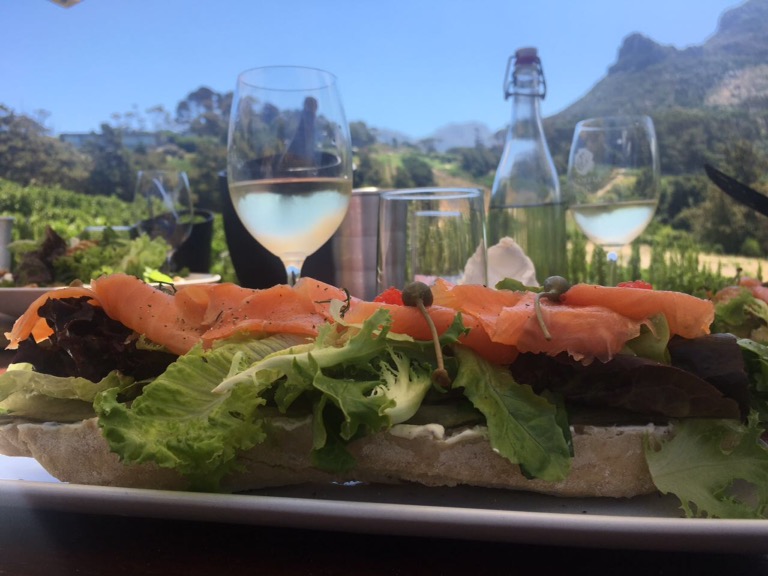 It’s only week 3 in the New Russian Federation of America and yet it seems like it has been years. This week alone we had Rep Elizabeth Warren being told to sit down and shut up. She dared to call racist Sessions exactly what he has portrayed himself to be.

We also had The Furher throwing a tantrum about his daughter’s Made in China tat failing in sales at Nordstrom and other retailers and as a result being pulled from their list of designers.

Hitting this family of bloodsuckers in the pocket will be an effective approach. You can download this app if you want to join this form of financial protest. 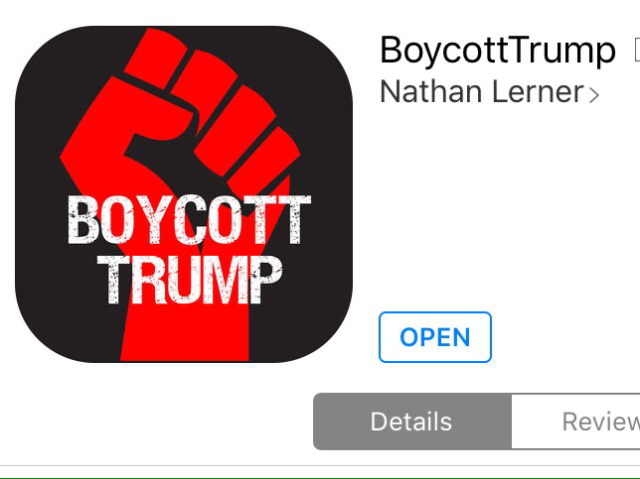 The resistance carries on with some other successes, such as the Muslim ban being halted by the US courts. My favourite lower scale protest this week was against the religious lunatic Betsy De Vos who bought herself the role of US Secretary of Education. The image below shows the list of palms that were greased.

This week she saw the public opinion of her up close and personal.

The crazy is strong all over the world. Great chasms are appearing in friendships and families due to differing political beliefs.

My ears have been blocked for ages, I hoped that when my Celtic flu finally cleared up that I would be able to hear properly again but no such luck. So last Sunday I decided to try candling my ears to see if it unblocked them. (Excuse my Sunday no make up face.)

It didn’t unblock them for some reason, normally it works like a charm. But it is a relaxing process anyway, I seldom just lie still with no diversions.

Sunday evening we decided to get a curry from our fave curry house in the village. It tasted delicious but I awoke in the middle of the night feeling very ill and ended up vomiting up what felt like gallons of curry. (TMI?)

I had meetings booked that morning and I was facilitating a workshop so I did not feel I could stay home in bed despite feeling rather rubbish so I trudged off to the city to work. I left work about lunch time however and came home to crash. When I got home I discovered that Caitlin was also feeling ill, so it must have been the curry we had. Norm was fine and he had chicken korma and Caitlin and I both had the prawn curry.

I went to bed and napped and felt better later that evening after I woke. Norm made us dinner. He had shopped for the week and he cooked pork chops, gem squash, pumpkin & asparagus for our dinner. It was yummy. I’m very spoiled.

Caitlin’s friend Annie was down from Johannesburg for a few days this week and she stayed over on Tuesday night and we made Mexican food.

We made a salad and baked provolone cheese for crispy fake-taco shells. Caitlin made chunky guacamole and I fried onions and peppers. All 100% HFLC and delicious.

The garden wall has been plastered now and the bright pink bougainvillea is in bloom.

I am feeling less stressed now that I am not posting every link and article I see about Trump on Facebook but instead I am trying to share just mostly the piss take pics. 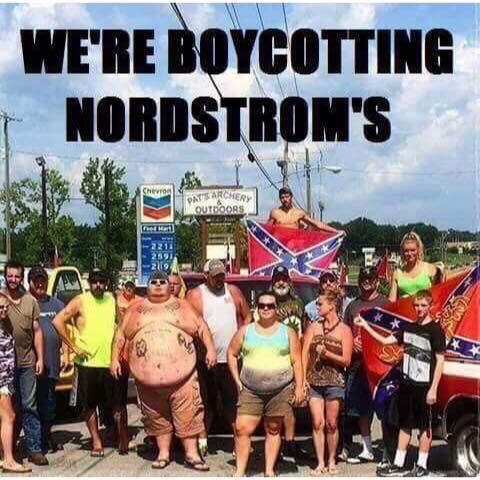 However I did get very annoyed due to blatant ignorance and misogyny that happened closer to home. I recently left a local FB group for people in my village due to sexism and glorification/normalisation of rape culture. A guy posted a link to an article about a preacher who had his clergy perform sex acts on him which he claimed would purify and heal them. One of the comments from the group admin regarding why they did not remove the post was that it was ‘not rape, there was no force involved’ as he laughed along with the original poster. Just because a woman (or child) is not forcibly tied down and physically overpowered when abused does NOT mean it is not rape. It has been proven that people will obey a person in a position of power either out of fear or out of a desire to appear cooperative–even when acting against their own better judgment and desires.

Those sorts of comments just propagate ignorance and normalise rape culture. This study which was done at Berkley explains the psychology behind the normalising of extraordinary behaviours. It also helps one to understand how people can continue to support what is blatant insanity on the part of Twitler.

I often forget that South Africa is so different to the US in so many ways. This week I  had that brought home to me when I complained on social media about my neighbour’s house alarm which goes off constantly. (I do mean constantly and sometimes it goes on for hours at a stretch.)

In the U.K. and the US your alarm is usually linked to the police. In SA most people subscribe to a security service provider, like ADT. We subscribe to Deep Blue. However most homes here have walls around our properties for security as well as large dogs so when the alarm goes off the security company usually only walks around the perimeter looking for visible signs of entry. They can’t reset the alarm unless you give them a remote. We don’t trust anyone with our keys or remotes so we have to make sure someone in the family can get home to turn it off if it is triggered. The police will only be called if the security company has determined that a crime is in progress or has already occurred, thus reducing the number of calls requiring one of our limited police to attend.. They usually rock up at some stage but it is nothing like the police in the US or the UK.. I have been burgled in the UK – they found the perpetrators and located my stolen car. Here the police are just too understaffed to have capacity to deal with minor common irritations like trespassers or break ins. When we had a break in they took days to dust for fingerprints.

Wednesday I came home a bit early so decided I would cook dinner. Norm had bought some new carb clever noodles from Woolworths which I wanted to try. 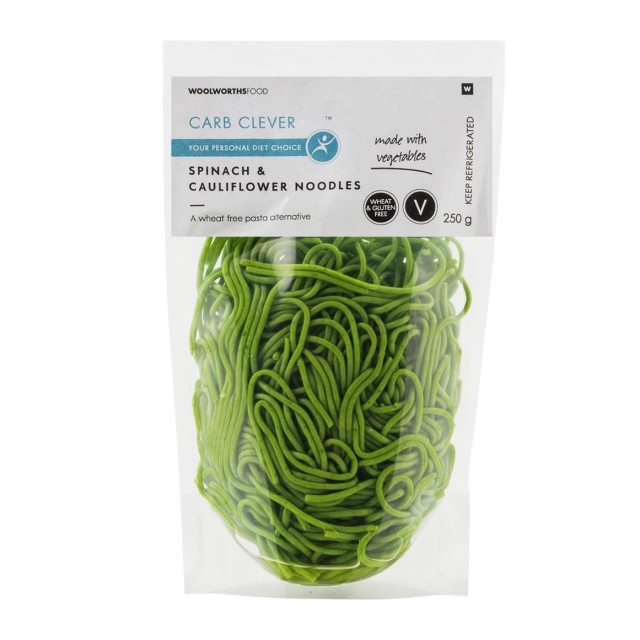 He had thought he grabbed 2 packs, but he grabbed a ‘regular’ noodle instead, and as there were 3 of us I cooked both packets. That also helped reduce the risk that they tasted of cardboard and we ended up starving, but they were really good!

I fried chicken and mushrooms in coconut oil, then once cooked I added in a tin of pureed tomatoes and a container of cream, added some chili powder, cumin and garlic and various other seasoning and then heated the noodles and chucked them in. It was very tasty!

The South African State of the Nation Address was on Thursday and our rather dodgy president called in the Troops to protect him. Much like Trump he is very unpopular due to his unethical and fraudulent dealings.

Little did we know that Zuma would pretend to be Mariah and rock up an hour and a half after he was scheduled to address parliament. The disrespect made the other parties rather angry and a fight ensued when the leader of Parliament used security to forcibly evict the EFF.

This is so embarrassing for SA as a nation. The president gave his same old speech of bullshit and cover ups.

Traffic around the CBD and especially around Parliament is grid-locked due to all of the arrivals of the blue light brigades for the entire week of SONA as they have rehearsals etc. Us normal people just must get out of the way. Therefore I decided to rather just work from home on Thursday. I just set up at the dining room table so I can see my mountain.

Just as well I did decide not to drive in as there were several fires which resulted in even more traffic delays.

Norm went to buy milk and came back with bones for the beasties to try and keep them quiet.

They were very happy.

As I was busy working he also fed me (probably to keep me quiet too.)

He is great at looking after me.

I normally lay out my clothes at night so as I don’t disturb Norm as I leave for work about 6.45am. However I didn’t do so on Thursday and I grabbed what I thought were grey shoes and when I got to workI realized Ihad on a grey top, black jeans and brown shoes. It made my matchy match Virgoness cringe every time I looked down.

It was so hot and humid on Friday. We just stayed in and had a relaxing night.

We had a girly lunch booked at Constantia Glen on Saturday . I had booked weeks in advance as I wanted the same table we had on my last visit. However when we arrived they had no note about the table I was promised and took us to a very crowded area surrounded by people. The table I booked was occupied. Instead they then they offered us a table on the other side which was quite acceptable and remote.

The downside of that was that sometimes we were completely ignored. The restaurant was up the hill from our table.

We had a gorgeous view. 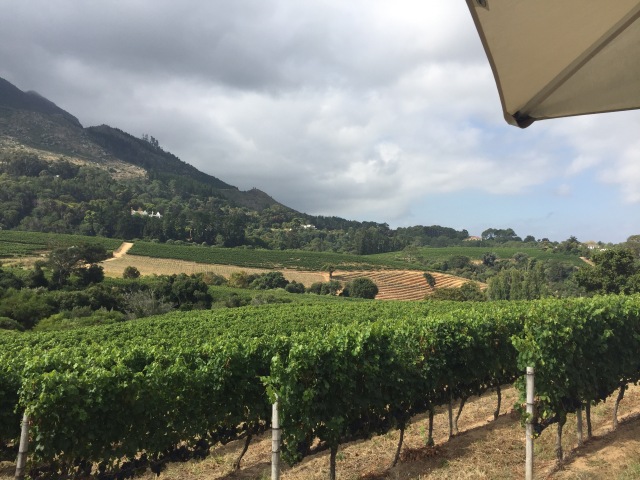 When we complained we had to listen to the waitress make excuses about how she has a big table of twenty and blah blah blah. When she was aware of us she brought lovely food. We nibbled on the cheese and charcuterie platter. 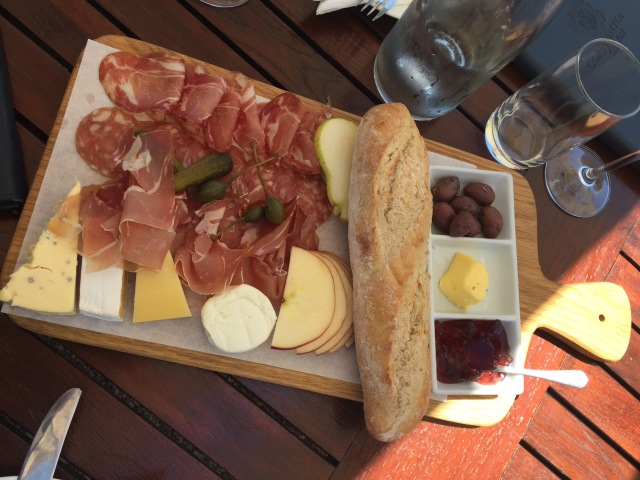 We then ordered the beetroot, goats cheese and walnut salad.

We all had salmon. Two of us had the open salmon sandwich.

The other 2 had salmon ribbons. 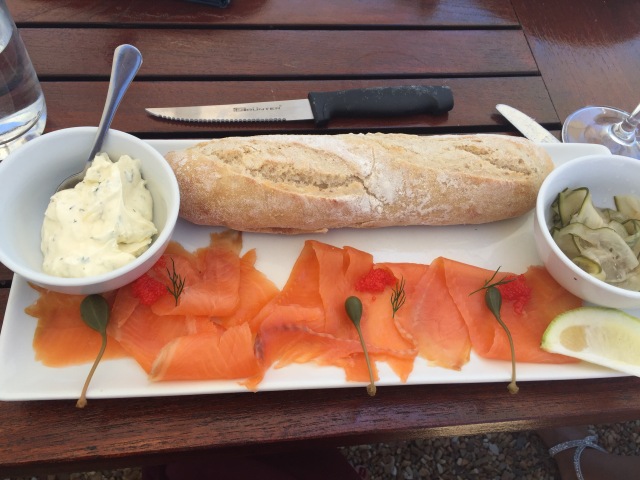 We had lots and lots of wine. I had far tooo much. But it was a gorgeous afternoon. We had a lot of laughs and got into some deep conversations.

I had so much wine that I was locked in full on party mode. Retha and I decided to get a lift with Nicola to Simonstown and meet her friends for a party. Norm had dropped myself and Retha and Alison and was supposed to return to collect us, but I forgot to tell him we moved on so when the vineyard closed he was a bit concerned.

We arrived to a view that was gorgeous.

We moved over to drinking Gin and Tonic. This was our worst decision and today I am paying the price.

Late that night we staggered down the hill to the village and went to Cafe Pescado on the main road. We had been going for hours and needed to eat something to sober up.

I had mussels which were delicious.

Norm phoned about 10pm to ask what was I doing and where was I and I persuaded him to come and collect us. It was a long way. Bless him he is too good to me.

When he collected us he told us Mr Toad came back again!

Today I am just lying on the couch in the recovery position. I think I broke my liver.Try not to make much noise please.