Why is it that a 3 day week always feels like it lasts a month? On Wednesday I was back at work after the public holiday on Tuesday.

The heat continued and it was hard to cope, but it was not hot enough to melt entire cars, so when I walked past the Artscape parking enroute to buy lunch at FLM and saw a whole car park full of cars in the state shown in the pictures below I was rather curious. 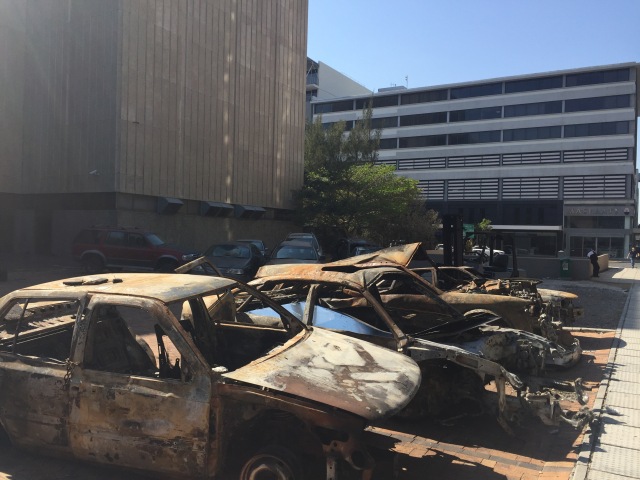 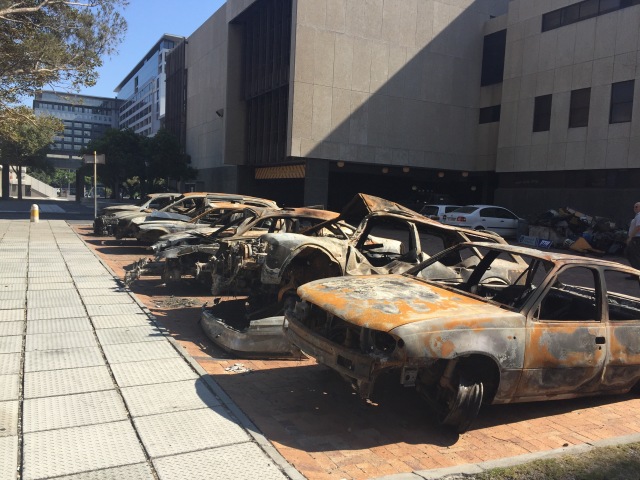 Later I heard that a film is being made. Rumour is that it is the Maze Runner 3. Cape Town is a huge centre for movie productions. You never know what or who you might encounter.

I had a presentation to my current client on Wednesday and my meeting went well. I always work myself up to such a state, but once I start presenting I am usually OK.

That afternoon I decided to take a different route home as the traffic was insane, however I did not factor into my last minute-ooo-let’s-turn-here-as-there-is-the-filter-light decision that traffic at the beach due to the heat would be even worse. At least I could gaze at the sea from my air conditioned car and listen to one of Ed Sheeran’s current top 16 hits on the radio..

The laws in SA are often not applied except on occasion. Many of the cars here look like they are held together with sticky tape, cardboard and rubber bands. At least in the UK a car has to prove it is fit to be on the road. In the UK you have to have a road worthy certificate for cars which gives assurance that there are proper brakes, that the headlights and turn signals function and the car is not a danger to other drivers.

The problem with not having any processes to ensure a car is road worthy is that all manner of clapped out cars are on our roads.

I was a near miss victim of this lack of regulation. When driving home on Wednesday I had overtaken a really old truck full of men piled in the back of the truck, the cab was periodically opened and closed to allow in a bit of air for what appeared to be a group of rastas. When I looked over at the driver he appeared about a hundred years old with no teeth and wrinkles like a raisin. A few minutes after overtaking them I came around a blind curve and upon a queue of stopped traffic backed up from the Llandudno traffic light.

I stopped easily but I looked up into my rear view mirror to watch with horror as the little truck plowed toward me with no signs of even slowing. I pulled off to the hard shoulder to get out of his way. He went wide of me and weaved behind the mini in front of me, coming finally to a stop by hitting the curb. I nearly peed my pants. Car crash very narrowly avoided 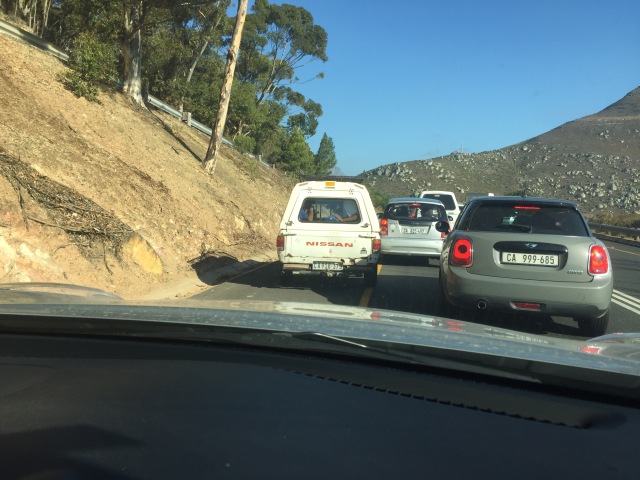 After all the drama I went into Hout Bay village to collect Norm at the garage as he dropped his car to see what’s up with the engine.

We went home and then Norm went to drop Cordelia at home and to collect a take away from Spiro’s.

I had tapas and a bit of Norm’s salad and tzaziki. I had delicious crispy squid, halloumi and chicken wings. At least I can stay mostly low carb with Spiro’s healthy menu. 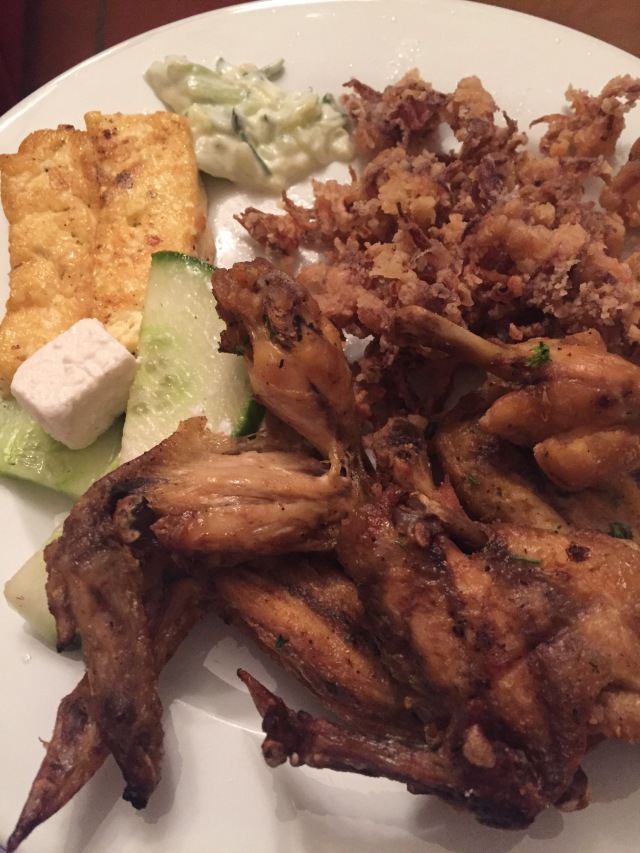 Once it cooled off a bit outside I made a Banting lasagna sauce for the following night’s dinner. It was too hot to cook early enough for eating that night.

One of the things I miss about my new office is stretching my legs each morning and afternoon walking across the foreshore from our old car park to our old office. I don’t miss the drunks, addicts and crazies as they are everywhere.

I was pleased to go exploring around my new work location with some colleagues. We took a walk around the neighborhood and I found a close dodgy wee cafe suitable for milky coffee in the morning as well as a new spot for lunches called The Lunch Depot. My friends ordered pies which they said were just ok, if a bit dry. I ordered the crispy chicken livers with salad. There was a sweet tangy dressing which was a nice balance for the livers. It was really yummy. I think it was about R60 I think which is reasonable. 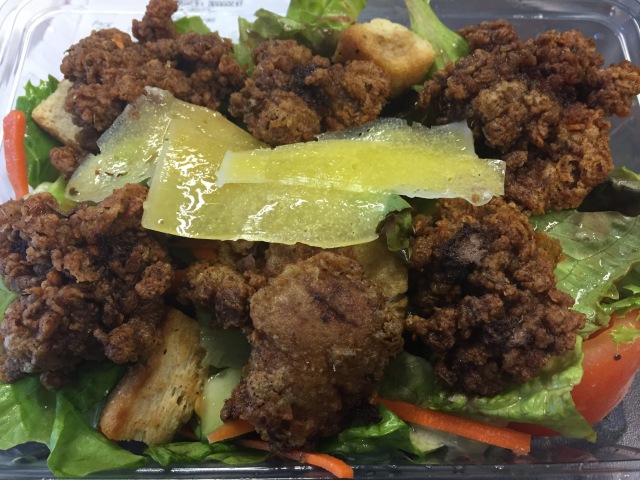 Pixie cavorted about the garden.

For dinner I made lasagna stuffed peppers using peeled baked aubergnes instead of pasta. I pre-baked the peppers then layered in the Real Meal Revolution meat sauce alternating with baked aubergine slices, then spooned on a huge layer of ricotta cheese and topped it all with thick mozzarella slabs. I baked until the cheese bubbled and was brown on top. I served with a salad with lots of avocado, radishes, cucumber and tomato with a dash of balsamic. 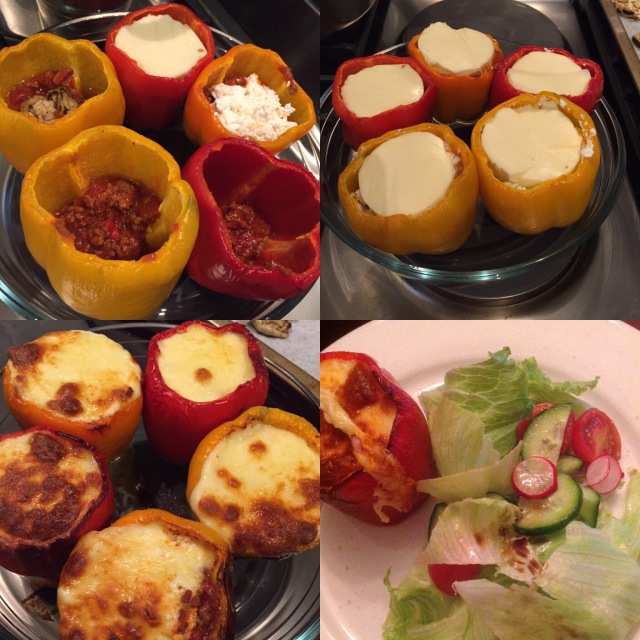 All of the dogs and one of the cats were very keen on sharing with our Norm. 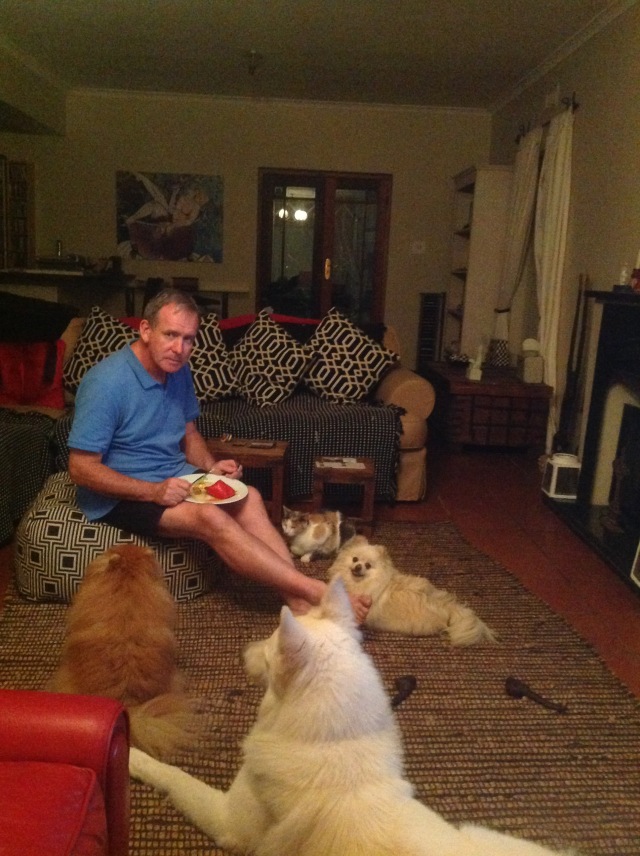 The following day they went to the groomer as they were smelling rather dreadful after getting wet in the rain. Pixie had hair that looked as if it had been crimped when it dried from her playing in the rain.

Don’t they look lovely? They smell of baby powder. 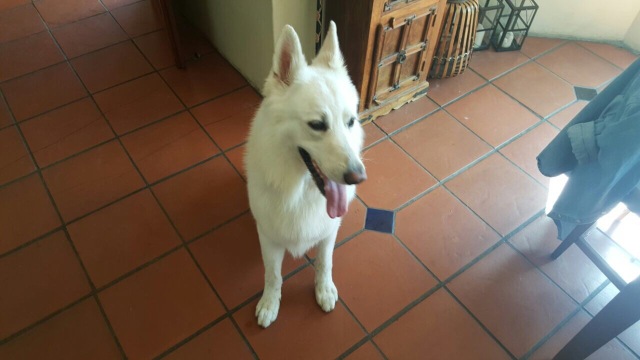 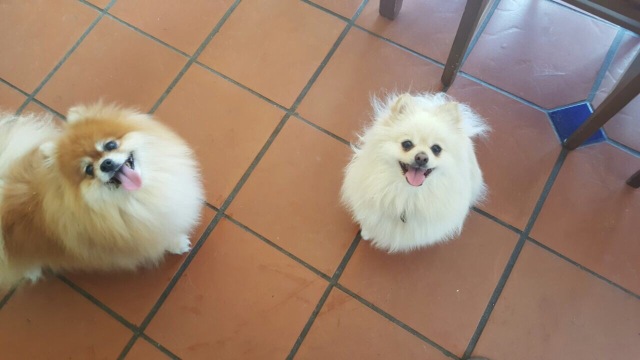 Caitlin went to the court again on Friday as it was the day of judgement for the men accused of killing her childhood friend Carl who was murdered. His family finally have justice. The 2 accused Juan Jacobs and Brent Henry have both been found guilty of murder. It won’t bring back their son or brother but at least someone had to pay for his death.

The sentencing should be in a few weeks.

The rebuilding of the area damaged by the recent fires is underway. Below is an excerpt from a post on Friday by our local councillor Cllr Rob Quintas: 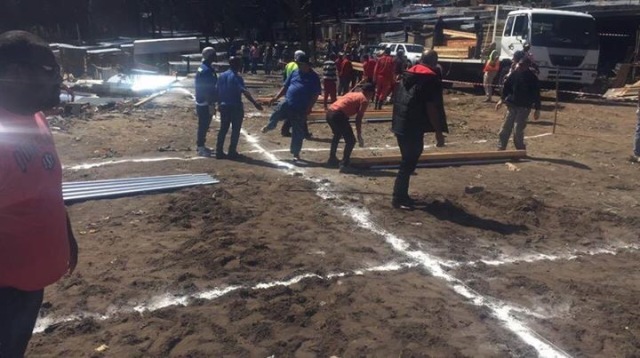 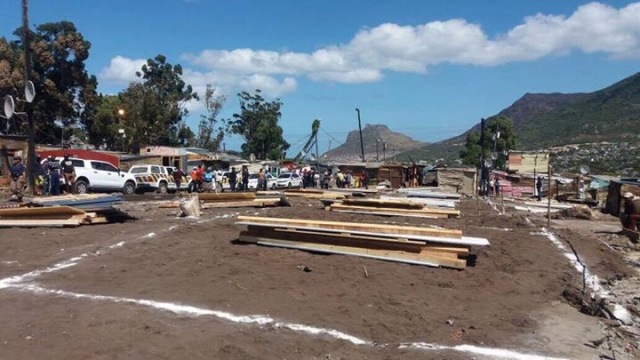 On Friday we had a peasant version of my lasagna for dinner. I had lots of everything leftover from my pepper dinner so I chucked it all in a pan and baked it and again served with a fresh crisp salad. 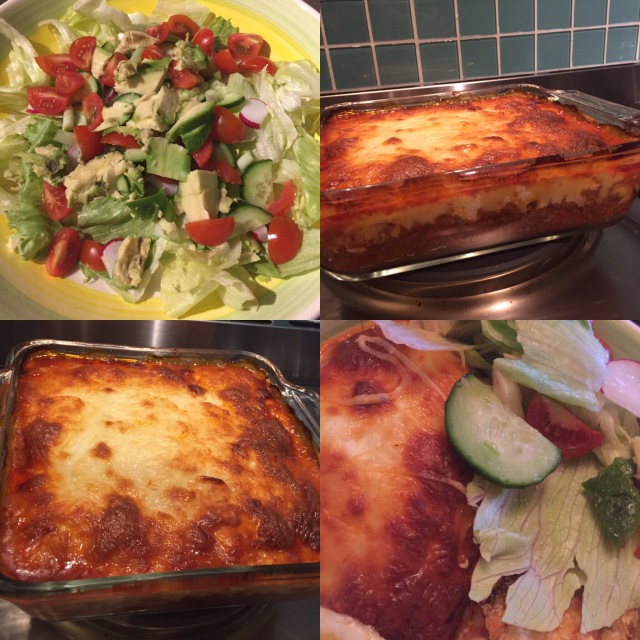 We had a quiet night in watching movies and relaxing.

I woke to this face on Saturday morning 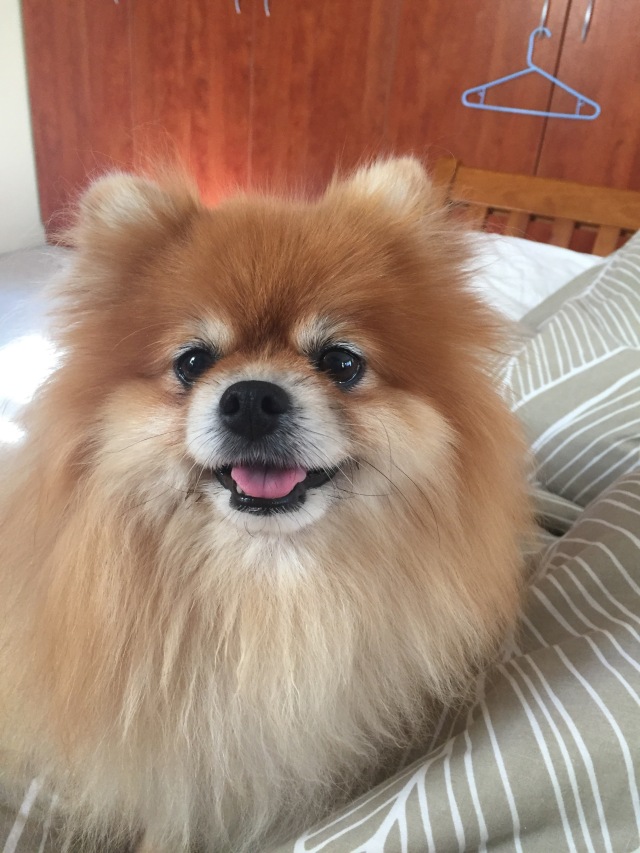 The Pomeranians were so cute.

Norm wasn’t feeling very well so he slept a lot and we had a rather lazy day.

I fancied a BLT but needed a low carb alternative. I grilled bacon and made some bacon, cheese & tomato lettuce wraps which I served with boiled eggs. I used fromage frais to give it a bit of moisture. It was really nice. 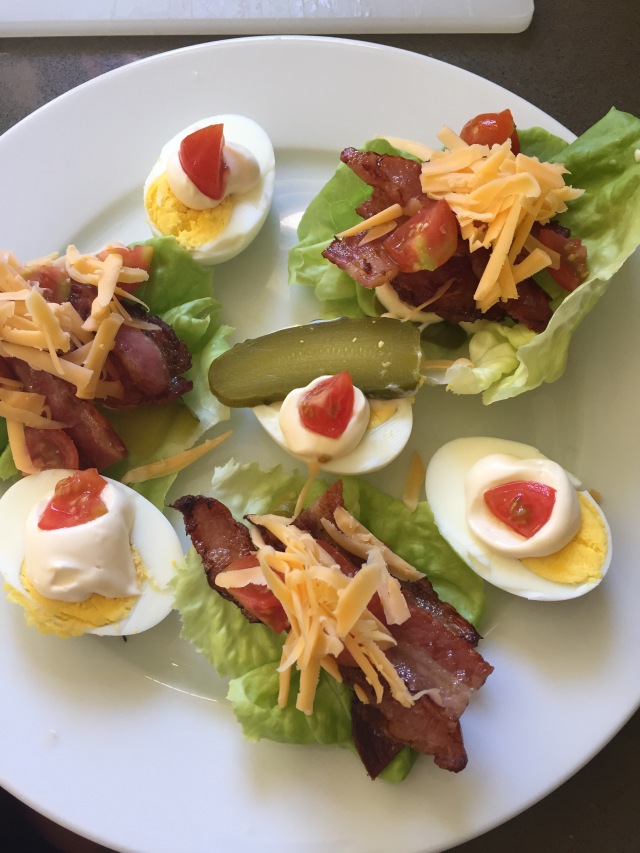 While Norm was napping I made a beef and butter bean curry for today. I add a bit of butternut which breaks down and thickens the sauce.

I will serve it with cauliflower rice with a bit of fried onion, garlic and cumin added.

I’ve got a busy week ahead. Norm is working and I am delivering my project and we are having a social event at work.

I hope your week is full of happiness. X