I had such a fabulous birthday weekend where I ate everything from cinnamon rolls to Orange Cake. I threw Banting under the bus and as a result I gained 2kgs of my weight back. Oops. To be honest it was worth it. I already felt so dreadful from the low blood pressure I didn’t notice any symptoms of carb flu. However Caitlin and I tried to be Banting compliant while Norm was away in Italy this week.

He was home for Sunday’s roast chicken dinner and then flew out late Sunday evening to Turin.

Monday I made a sort of Banting pasta using the shredded leftover roast chicken. To that I added fried peppers, onions, red chilli, mushrooms and bacon then threw in the previous evening’s leftover chopped long stemmed broccoli and zucchini zoodles and a container of cream and some chicken stock. It was rather delicious. 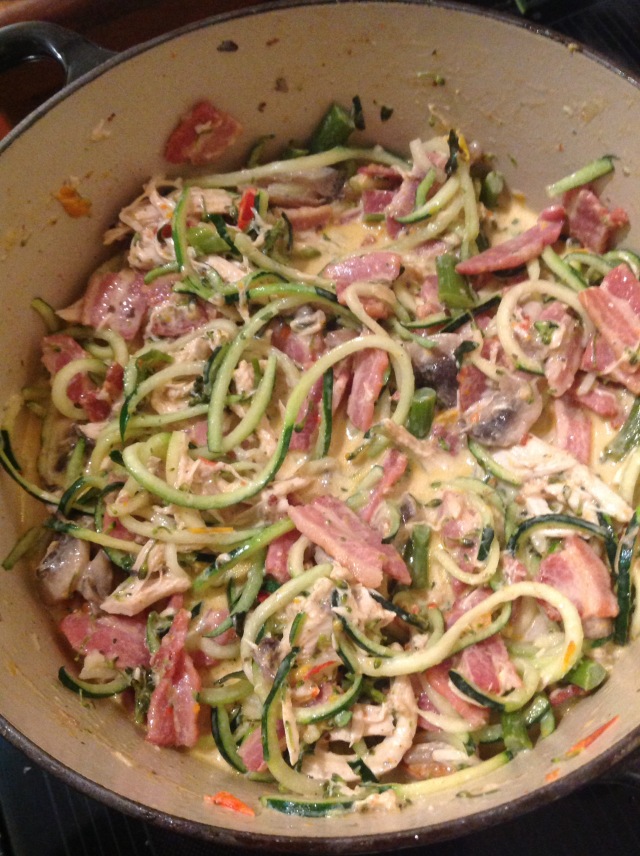 I also made a lasagna sauce for the following night. On my way home from work on Tuesday I popped into our local Spar and got some zucchini. Lasagna used to be a special occasion dish but we have been having it almost every week. I made up the dish using real ricotta and thick slabs of mozzarella alternated with the thick, rich, bacony, beefy tomato sauce and thinly ribboned zucchini.

Wednesday Caitlin was dying for a Curry so she treated me to dinner from The Indian Oven here in Hout Bay. Norm was supposed to be home that evening very late.

However he ended up having a total of 40 hours travel from the time he arrived at Turin airport to come home. There were no planes taking off from Turin as none were available. None of the planes could land the previous night so no flights were available the next morning. Norm ended up in London unable to see his family as he was in transit there unexpectedly. He took this crazy zigzag long trip to get home to me. ❤️

He made his trip to Turin last only 1 day so I was not alone as Caitlin was going away on the weekend.

For those readers who don’t know me personally I should explain why the obscure blog title and the personal reference to the Proclaimers.

The Proclaimers are from the same little tiny corner of Scotland as my husband Norm and their most well known song is this one.

True to his compatriot’s song lyrics Norm would do anything for me, I can always depend on him.

As can he always rely on me.

Unless it involves my needing to drive at night as I can’t see. So airport drop offs are a problem, for security issues we avoid public transport for any airport drop offs. We keep all info about him being away off of social media as we have had several break in attempts when he was away. We have had so many other catastrophes occur when he is traveling. It’s insane. Like the wolves are waiting at the door for my guardian angel to be distracted then BAM they bite the kitten on the tail.

My new boots arrived this week. I love them. I had thought they would be leather based on the price and the online pic. Never mind, I like them and they seem well made.

My birthday lilies are blooming and smell divine.

While Norm was away the animals were all behaving so oddly. They don’t get walked now that our dog walker has moved to Constantia.

I had 5 clingy animals everywhere I turned.

Little Panda just looked miserable and sad without his darling Daddy. He even snuggled Caitlin whom he normally treats with typical Pomeramian Prince-like disdain.

Norm finally made it home late on Thursday morning. He went home and had a bit of sleep while I worked. Later when Caitlin and I got home he offered to treat us to takeaways from Spiro’s. I wanted tiny squids or grilled fish but they were out of both, so instead I decided to get a double meze portion of crispy chicken wings and some zucchini ribbons, with that I added a bit of salad. We like that we can be mostly Banting and get good value at Spiro’s.

Pixie had her evil eye on those wings.

Wesley and Cait went away for the weekend so Norm and I were free and single all weekend.

Friday we were home on our own but tired, so we indulged in another curry even though I had just had it on Wednesday. There is a new owner at our local curry house Norm discovered. I hope they keep it all the same. I hate it when someone takes over a successful venture and changes it beyond recognition. So far so good with the Indian Oven. We really enjoyed it.

Saturday I had to be up and out so while I showered Norm made us a delicious breakfast. 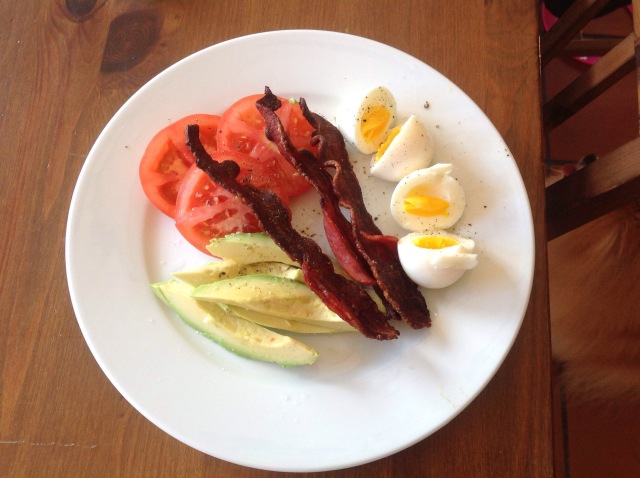 That is his plate, I had soft boiled and only 1 egg. It was delish.

I headed out to my hairdresser Leandra who works out of Mop Hair in the city. I had quite a bit cut off, it looks much healthier. 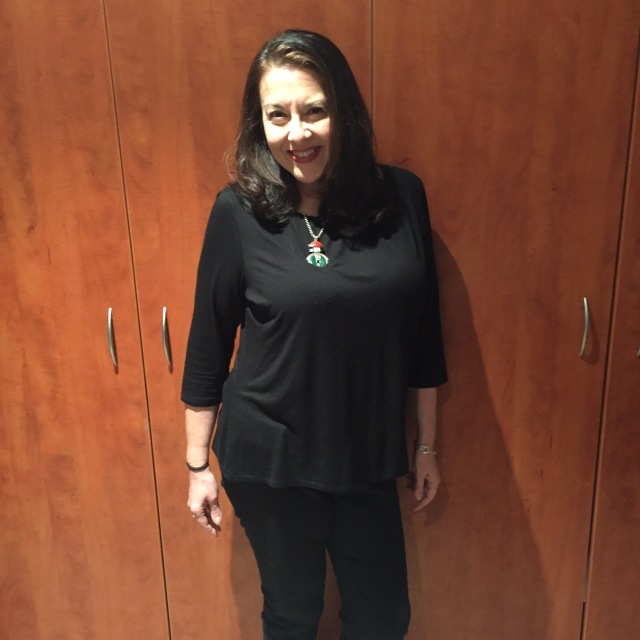 I popped round to Retha’s new cottage on my way home as I hadn’t seen her all week. We sat enjoying the view and catching up. I like that we can discuss Pierre as if he just popped out for milk and will return any minute. By that I mean I can say to her that I could feel him communicating with me at certain points and she understands. She can speak openly about her feelings and I listen. Anyway, Retha and the kitties are settling in.

That evening Norm and I popped out to dinner to Primi Piatti in Constantia. I was very naughty and had a few strawberry margaritas.

To start I had the Caesar Lettuce wraps at R65. Baby cos leaves filled with crispy bacon & grilled chicken; topped with boiled eggs, croutons, anchovy, pecorino shavings & Caesar dressing. Served with garlic-rubbed crostini but I didn’t eat that. The dressing is non Banting. But there isn’t toooo much. *justifies naughty behavior*

Norm had the salad caprese. Bit blurry eh. It was dark.

For my main I had the Filletto al funghi: Flame-grilled beef fillet tournedos, served sliced on a bed of mashed butternut with a mushroom, green peppercorn, brandy & mustard sauce. It was divine. 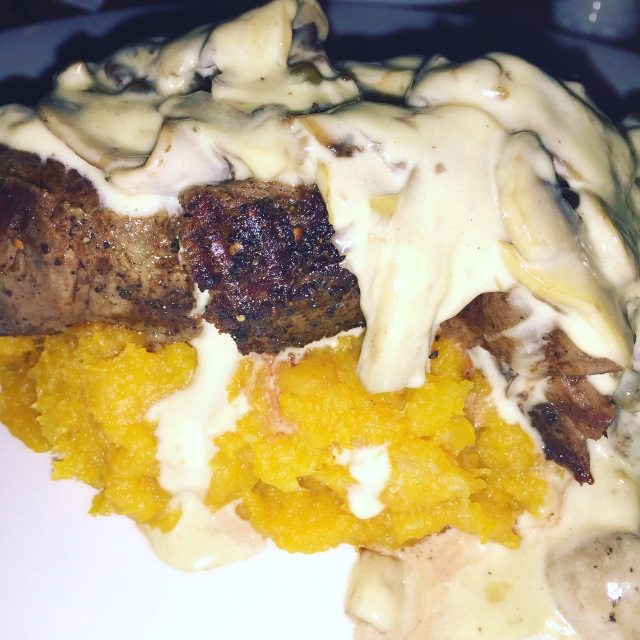 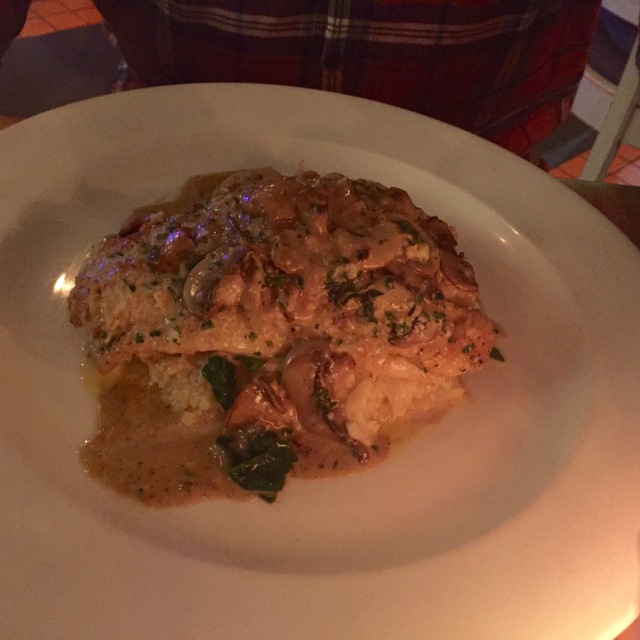 I had a nibble and it was a fabulous piece of fish.

We headed home and watched The Jungle Book.

The Disney version was my childhood fave and growing up I pretended to be Mowgli while mooching around my 20 acre childhood estate with my dogs.

Today we have pottered around doing nothing much. I watched Notting Hill again, I love it. Norm scrubbed the bathroom walls and I cleaned the kitchen but we did nothing strenuous.

Caitlin came home from her weekend away rather upset. She and Wes both had food poisoning on their romantic weekend away and spent it sick in bed. They even saw a doctor they were in such pain. Bless them.

I have enjoyed my lazy weekend. I needed it. My new project kicks off next week so I will be very busy!