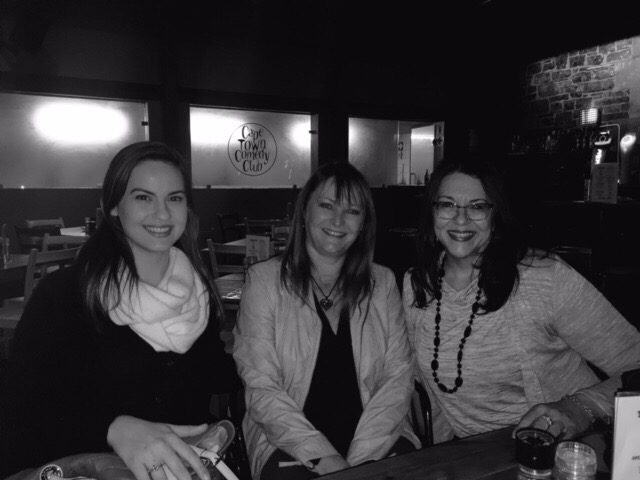 It takes a lot to entertain a Virgo. We are difficult customers in general due to our high standards. These are the same standards to which we hold ourselves, so to us that’s fair.

I’ve learned to try and bite my tongue and just accept a plate of food or a cup of coffee but the Virgo need for continuous improvement is hard to suppress. I hear my inner Virgo burst out in a Tourette’s type style with things like: ‘so is this one or two shots of coffee’ and ‘did you fry the sprouts in butter after you par-boiled them’. I annoy even myself.

Hence my worry that the stress I was feeling Wednesday over my Mom’s accident would cause me to have my usual jaded approach to the evening of comedy we had been invited to attend by the lovely Letishia from Queen Bee Marketing. It was in honour of Women’s Month.

I had also gone back to work that day after 4 days off, so I was tired. However I’m the sort that does my best to not let my friends down so I ran home and changed and quickly freshened up and Retha collected Caitlin and I and we all set off to The Cape Town Comedy Club.

As we arrived I received a message that my mom was out of surgery and was going to a regular room rather than ICU. I felt like a weight had been lifted from my shoulders. I welcomed that drink!

We had some delicious platters, pizza, chicken wings, chili poppers, calamari, chips, cold meats, cheese and breads. It was all delicious! 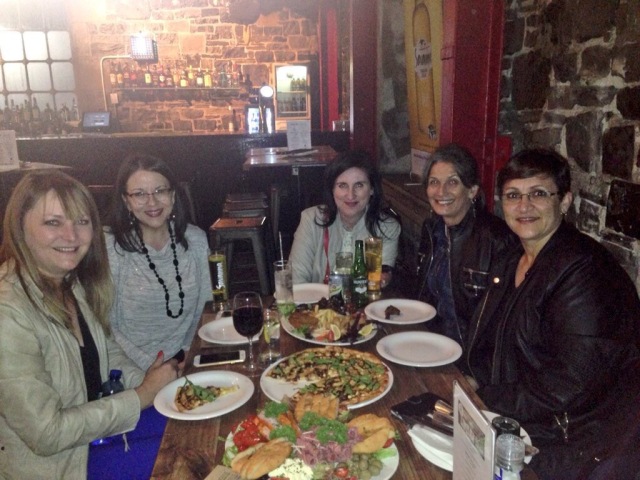 We had such a laugh! The comedians were hilarious and emcee Tracy Klass had me wetting my menopausal pants with her between set bits.

Of the comedians I really enjoyed Shimmy Isaacs and the guest Riaad Moosa was hilarious. They both had a bit of American piss taking in their routine which I could relate to. Trying to communicate in a country with a shit load of official languages can be a challenge!

We had a great night. 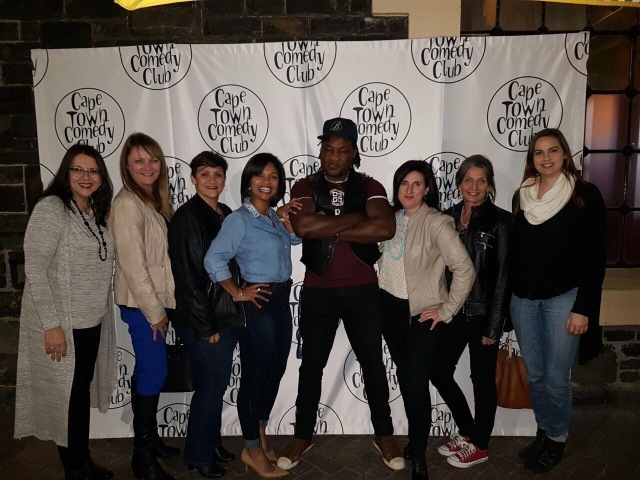 That night I struggled to sleep, I had just enough to drink that I had that feeling of hyper-awareness where you are incredibly concious of the existence of your arms and can’t remember where you normally put them when you sleep. I couldn’t get comfy. As a result I was finished at work the next day. But it was worth it.

Thursday we had a client workshop at Century City which finished after 4 and I was meeting Vanessa at my house for my pedicure at 5 so had a race to get to Hout Bay but just made it on time!

After Vanessa left I made dinner, chicken breasts stuffed with goats cheese and wrapped in bacon.

To accompany I steamed broccoli, boiled gem squash and fried mushrooms in garlic and butter. It was divine!

I also made the sauce for a Banting cottage pie for the following day. Friday evening Caitlin had Annie round and Lily and Josh arrived as well so there were 6 of us for dinner. I made cheesy, creamy, chorizo sauce with normal pasta for the non-banters as well as garlic bread. Annie arrived with spinach cannelloni so we had tons of food. We had a lovely evening. I love having my girls home, I just missed Trevor and Amber. They were literally fighting fires in Wilderness as the mountain and vlei near them caught light.

The wind was howling and it spread rapidly, destroying 4 homes and loads of vegetation. 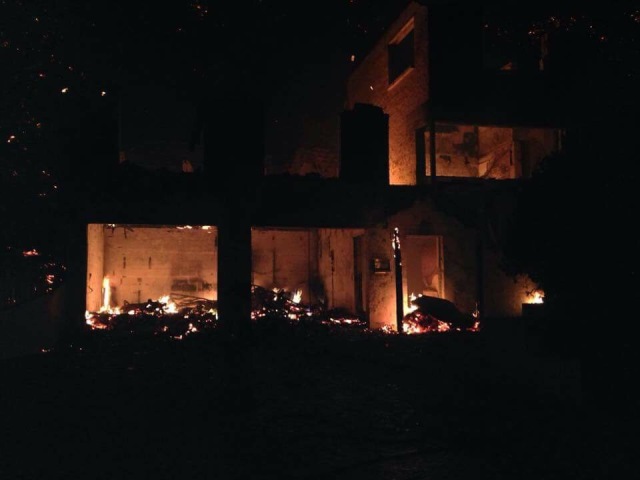 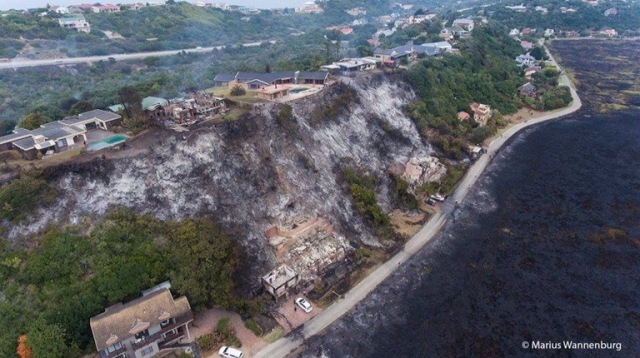 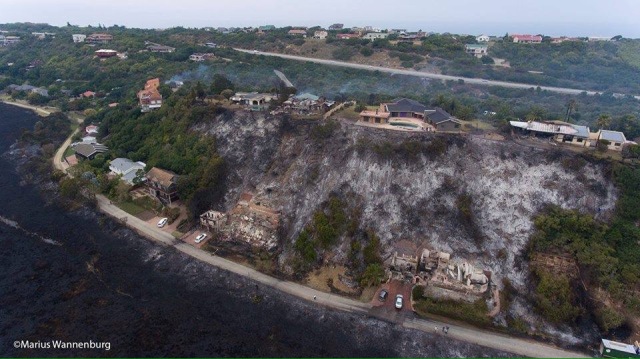 Images via George Herald.
I feel so grateful for my son and DIL’s home being spared as this is a pic of their road. The black charred area in the last pic above is the nature reserve across from their home.

I feel so heart sore for the 4 families who have lost their homes and the animals who might have died in the veld.

Saturday we had a slovenly morning in bed, then went to check out a few different suppliers of sinks and taps and other bits for our upcoming kitchen remodeling project. The kids were all out so we didn’t have any responsibilities that evening.

We stopped at Green’s Constantia on our way home that afternoon for a coffee and a naughty non-Banting slice of lemon cheesecake. It was light and not too tart and really divine. We stopped off at Retha’s house and then headed home. That night we contemplated going out but it was pouring rain and howling wind and decided to rather get meze from Spiro’s instead. We shared chicken, crispy squid, grilled halloumi, salad, tzaziki and zucchini ribbons grilled in butter. Healthy and reasonably low carb. We watched a bit of the Olympics.

I did a bit of online shopping at Mr Price and got some bits to tart up my lounge. A few more of the cushions I recently bought, an ottoman and some throws. 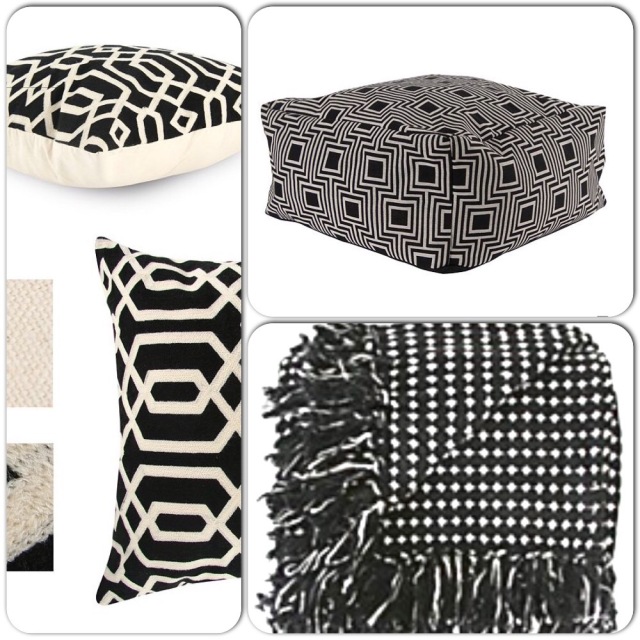 The bright red throws I recently bought are just too red. 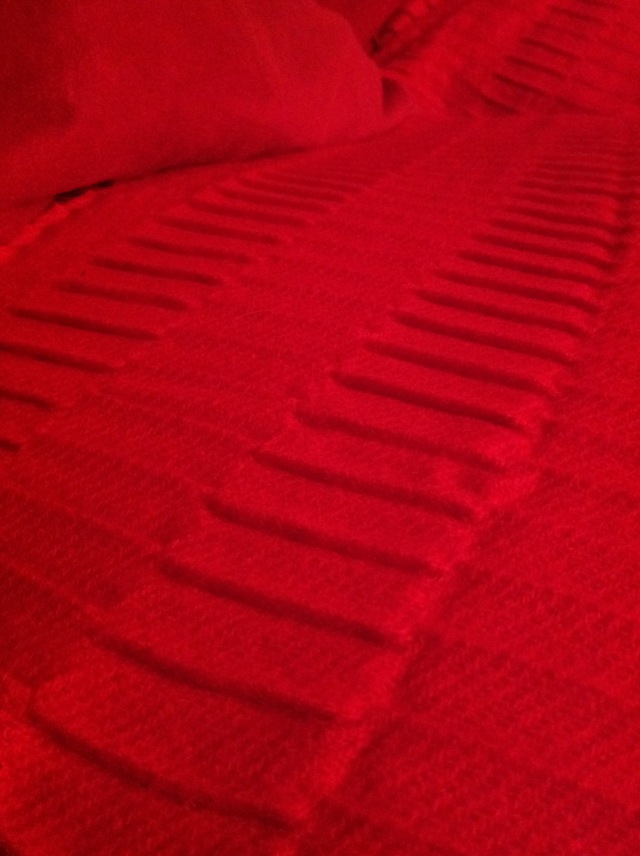 Last night I translated my weight loss so far into pounds and realized I had lost almost 50 pounds! I grew up thinking in pounds and now that my world is in kilos it’s difficult to be bilingual. I didn’t really set goals when we started this lifestyle, I decided to let my body find its balance. I had remarked that if I lost 50 lbs it would put me back pretty close to the weight I was when I met Norm almost 20 years ago but at 53 years of age, in a menopausal, non-exercising body that seemed unrealistic so I said that if I lost 25 lbs I would be happy. As my scales are in kilos I hadn’t thought about that goal, so it was a bit of a shock to me!

I feel very proud of my determination and efforts.