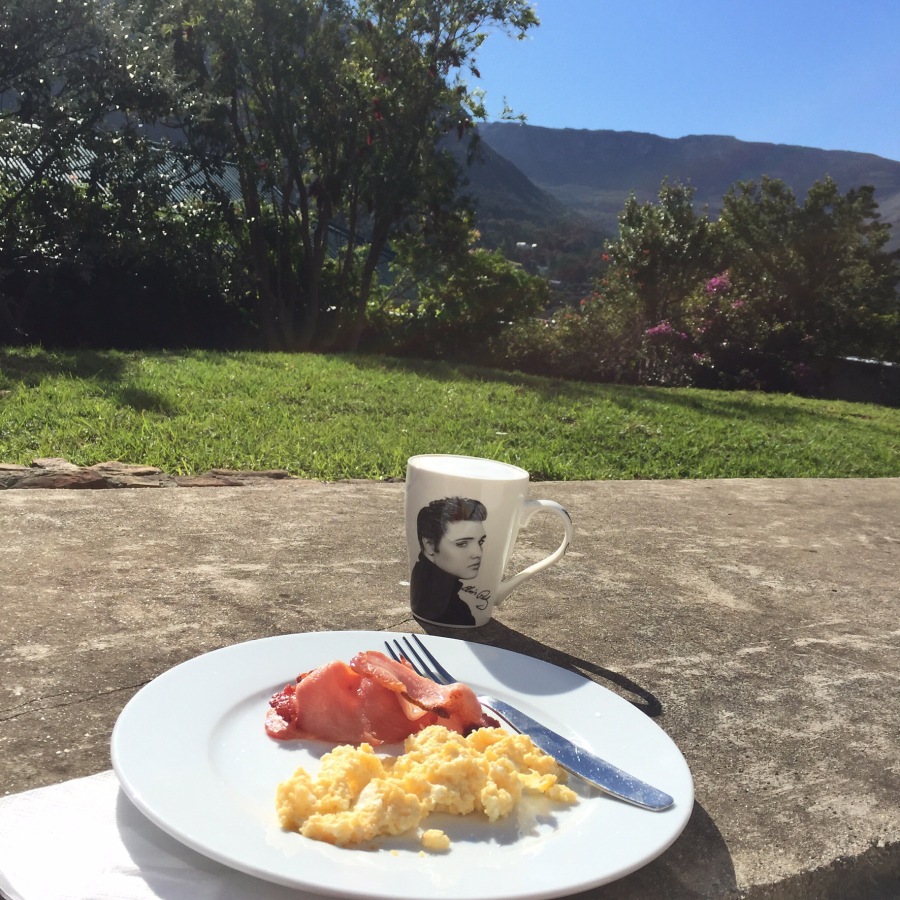 I can’t believe it is over a week since I fell ill and yet I am still sick. My head is so congested. But the show must go on.

After work on Monday I was faced with my lack of pot roast for dinner thanks to naughty Navajo and had to come up with a new plan. I had aubergines, mince and mozzarella in the fridge so I thinly sliced and lightly fried the aubergines. I fried the mince until brown then added cumin, paprika and lots of garlic and some chili. I fried onion and red pepper then puréed it and added to the meat with some tomato purée and a tin of chopped tomatoes. I let that simmer for a bit then layered the mince, aubergines and mozzarella in 2 rounds of layers then baked. 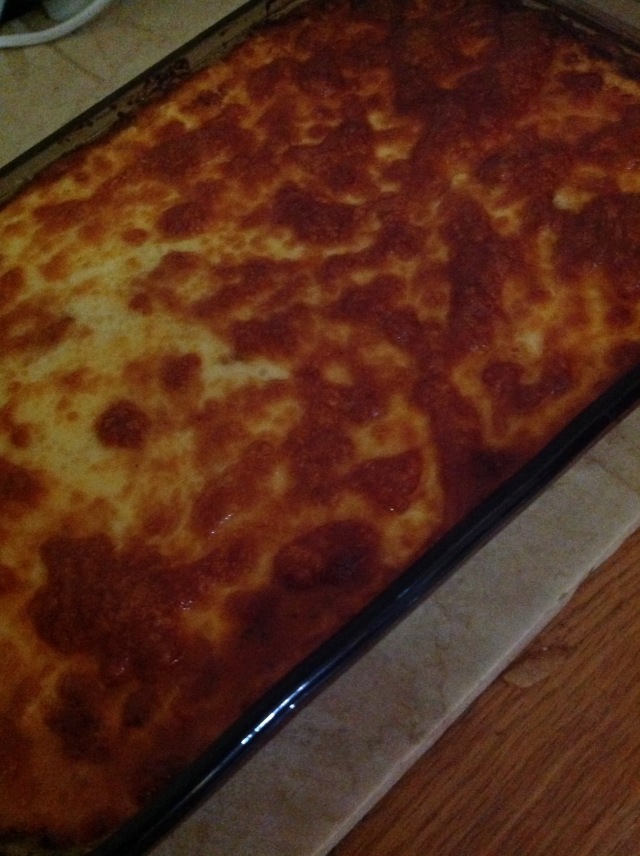 Last week in my blog I mentioned that we were having censorship imposed by the SABC and that many TV shows and radio shows have been cancelled when their hosts tried to expose corruption. We’ve been advised as well that the TV and radio stations are being forbidden from mentioning protests or anything else which can cast the ANC in a poor light prior to the elections.

The Twitterverse went wild when Jimi Matthews announced that he had quit his job this week. Several other journalists had written to ask for the recent decisions around censorship to be reconsidered.

However the decisions are being made by a man unsuitable to fulfill the post he holds. Hlaudi Motsoeneng lied about his qualifications. The SABC did not act on the Public Protector’s findings about his suitability for office. There are other instances where the Public Protector was ignored if you remember my previous blog about our fabulous Thuli. If only she were President!

The speech made by Mmusi Maimane tells of the unethical changes to try and hide the ugliness and reality of poor governance. Rather than do his job in a transparent, responsible manner, Zuma prefers to hire people to manage to hide the truth or to be his lapdog and do what he needs done. The truth is not hidden, it comes out via Twitter or other social media platforms, today everyone is a reporter. However it isn’t freely available via the national broadcasting channels.

We received a R400 speeding fine in the post this week from when we took our road trip up the coast to Wilderness.  That’s so annoying, the cops hide in the bushes. It seems so sneaky. Taking lessons from the top though, why should we expect clear transparent behaviors.

Several new projects came through this week so I’m busy, busy, busy. I did make great progress on my data rules for my main project so it was a good week work wise.

Wednesday evening Norm and I cooked dinner together. Fillet steak is one of my faves. We boiled tiny sweet potatoes and I had 1 of those mashed with butter, we also sautéed mushrooms in butter and garlic, and fried red cabbage in balsamic and butter to go with the steaks. 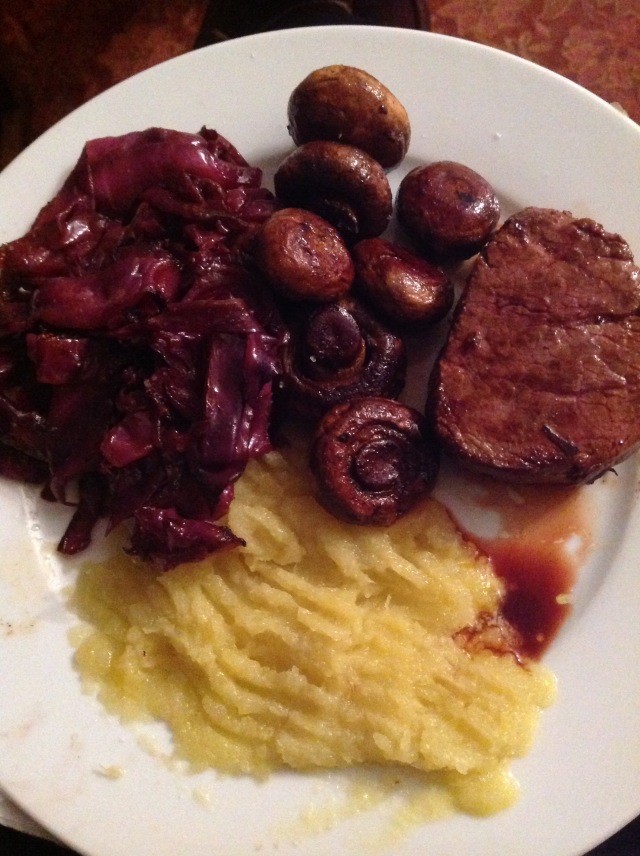 Thursday morning was so ridiculously cold. It was 9 degrees Celcius outside when I was walking across the damp, misty foreshore at 730am. I spent all day in meetings talking, but sometimes that means you all set off in the right direction on a new project quickly and cleanly with no faffing about. So we actually are making great traction on the project.

Norm stopped to buy some chicken breasts and we made a lightly curried coconut cream chicken, mushroom and broccoli dish. We served with caulimash.

We never normally cook together so it was fun to be doing so again. We even got on without arguing! And the resulting dinner was yummy.

Thursday was Lily’s last day at work at her current job in Cape Town. She has been down here living with us for over 5 years since I moved back to SA. Going to university for four years then a year working. She will be working for Josh and his Dad’s electrical firm doing admin in Great Brak. She studied so long to do events, I hope she isn’t giving up her career for love but I do know how hard long distance relationships are and they have been together for 8 years now so I do understand. I am going to miss her so much, she seldom goes out and she hangs out with me most of the time so I’ll miss my little sidekick. I just want her to be happy though so her decision needs to be about what she wants, not what I want.

That night we went to bed about midnight. The alarm triggered as soon as we locked up. It was pouring rain and the rain poured under the door onto our upstairs landing and flooded upstairs. It also poured off the front balcony in a sheet, triggering the beams below. It took ages to figure out what was going on and over ride it.

Friday came round finally, I hadn’t had many 5 day work weeks lately! Josh came down and he and Lily had a birthday party to attend and Caitlin was going for drinks after work. Norm and I decided despite the freezing weather to have a date night so we went to our fave winter venue, Papino’s. They always have a roaring fire. It didn’t disappoint, it was so cozy! We both ordered the Hollandse Biefstuk described as a “Pan-fried beef fillet with mushrooms flambéed with brandy”. I also ordered the side of their yummy sautéed mushrooms. Norm was virtuous but I ordered chips as they used to have amazing crunchy fat chips, but these were skinny fries so they ended up not being worth the carbs.

It was delicious, to go with we each had a glass of Sauvignon blanc. Norm trotted round the corner to Spar to get a bottle of wine and some nuts to nibble on for at home later that night. We headed out as soon as we finished and chilled out at home for the rest of the evening. We were both due up early the next day.

Norm was up and out early to a Neighbourhood Watch meeting. As Mzudumo arrived to do the garden Lily made Mzudumo’s breakfast and got him started.

I was away early too as I had a hair appointment in the city. While she styled my hairdresser and I were discussing the article I had found which validated the fact my hair is thinning. The fact that it is exactly 6 months since I gave up sugar and carbs makes sense according to the info in that article.

It’s also interesting that it seems to be coming back less gray. How can a dietary change act as an age repellent?

How does my hair look? I can tell its thinner. 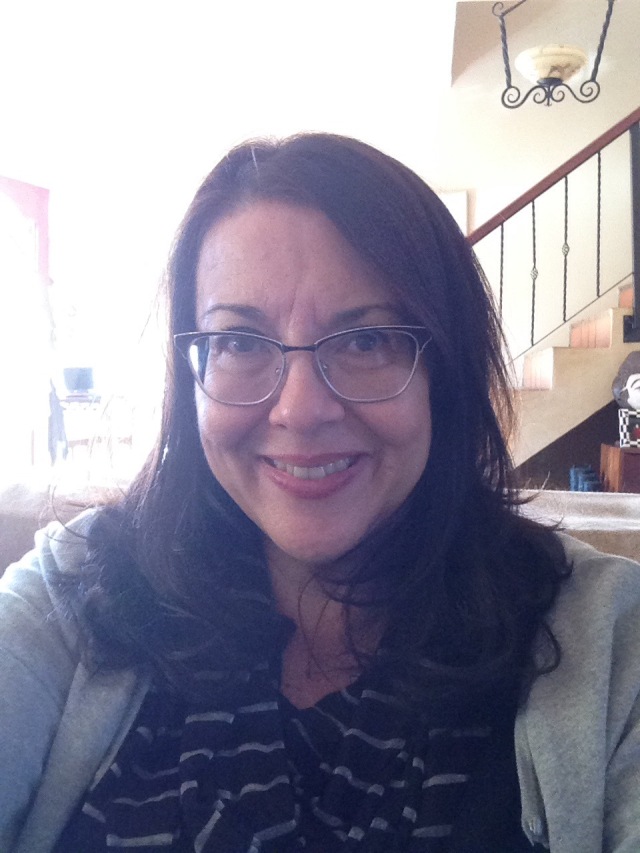 I stopped on the way home to get Mzudumo a sausage roll pie and some chicken for his lunch then headed home.

Saturday evening we had a family games night at home to say cheerio to Lily. Caitlin’s fella Wesley came round too so there were six of us. We drew straws for teams and played two games of 30 seconds and ended up with me, Josh and Norm winning the first game and Caitlin, Lily and Wesley the second. We ordered pizzas and some of us had Banting pizzas from Cassarechio and some of us had proper pizza from Mimmi To Go. I had Mimmi half Hot Latina and half Manuel. It was delicious.

Caitlin made Banting brownies and we all had a brownie. We had lots of fun and laughed so much. I will miss those casual fun noisy evenings with my girls.

Today the kids got up and packed Josh’s truck and Lily’s car. I took a pic of one pile of her bags and posted it on Facebook along with a lovely post. I then got this message.

I quickly deleted it but a lot of people saw it. How embarrassing. This is the censored one. This censorship is best for us all. 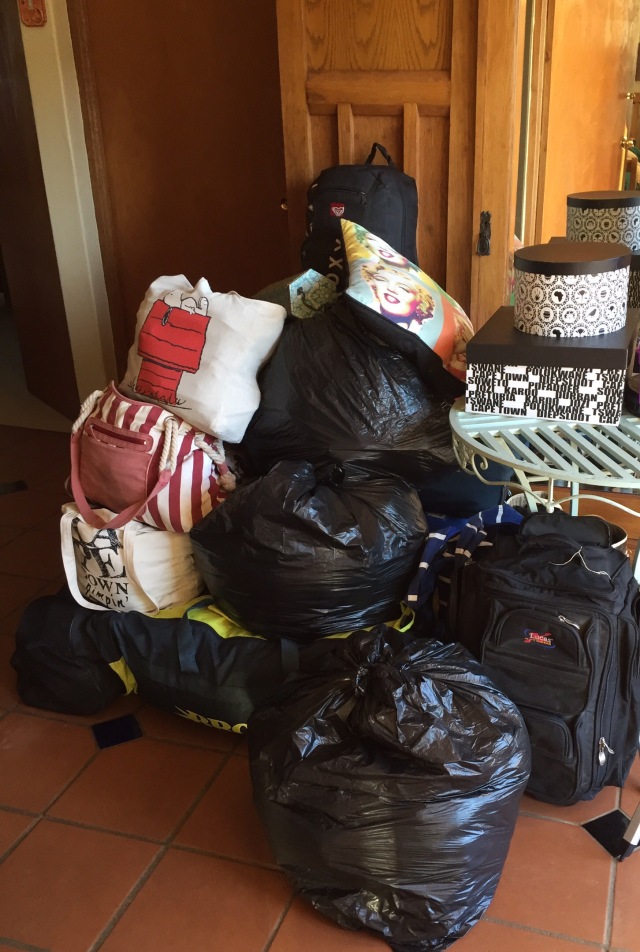 They got all her stuff packed up. 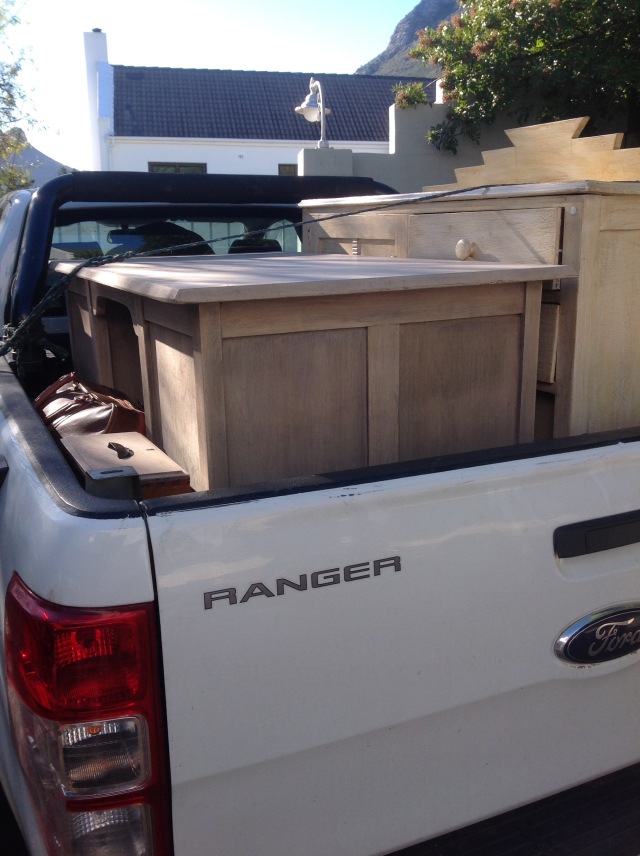 We all sadly hugged and off they went. I’ll miss her so.

It was a stunner of a day suddenly after a week of freezing cold and rain. I had breakfast outside with Elvis and my mountain to try and cheer me up.

The dogs tried to cheer me up too and followed my every move. 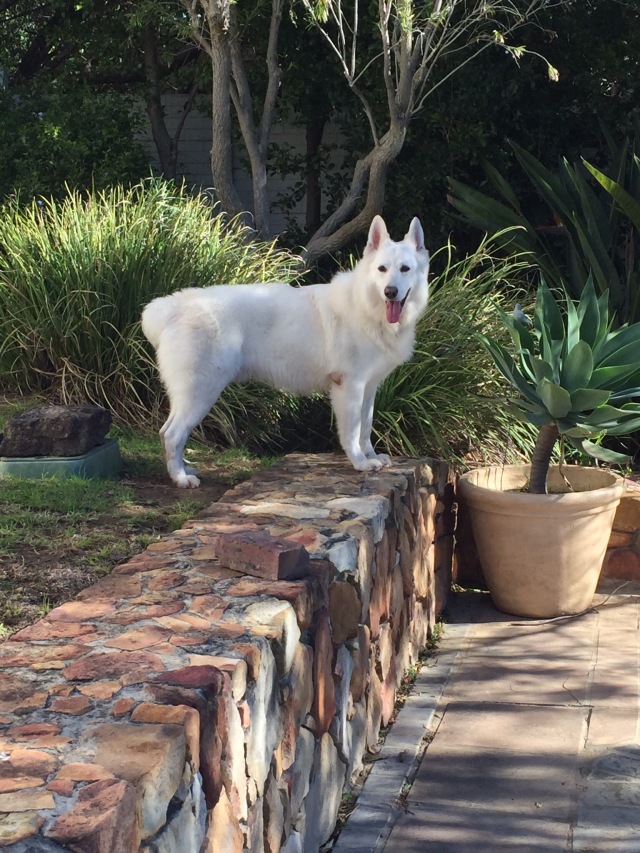 I had a mooch round the garden. I just pottered about enjoying the sunshine and tugging the occasional weed. My flowers are doing so well with the recent rain. 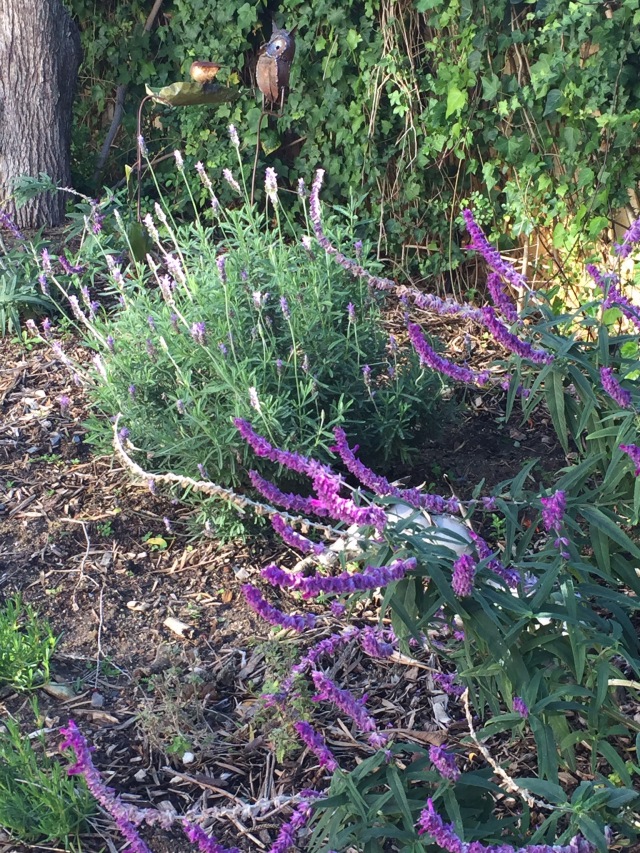 Lily has just messaged to say they made it safe and sound. I hope her new job goes well tomorrow, but most of all I hope she is happy.