Last week was one of those weeks where you feel like your life is one monotonous rotation of work, home, bed, and then the cycle starting over again the next day. But this week was packed full of all manner of random diverse activity.

Work was again hectic with me going off at 7am and getting home about 7pm so we had a few nights of take aways. I was delighted that my favourite pizza appeared back on Massimo’s daily special menu.

The John Wayne is one of their many delicious sounding daily specials and consists of pulled bbq beef, smoked mozzarella, red onion, and huge pieces of jalapeño peppers. It’s my happy place. Oh Lordy. Their tomato sauce is so full of flavour. The mozzarella is thick and creamy, it is proper mozzarella. Not that plastic rubbish so many places try to pass off as mozzarella. It’s just amazing. My only slight suggestion would be to cut the jalapeños a wee bit shorter but that’s more about my untidiness while eating than anything else. But it is all of my favorite things all on one pizza. 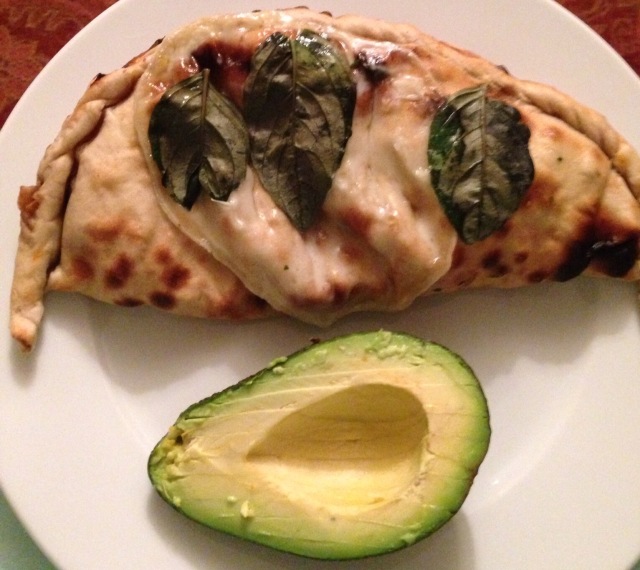 Norm was supposed to ask for no ham as Cait is trying to be pescatarian but he forgot.

We liked the idea that R10 of the cost of it goes to Watchcon. She said it was delicious and it certainly smelled divine.

On Tuesday night Norman and I attended the meeting of the Hout Bay Community Policing Forum. There was a huge upsurge in attendance from the usual numbers of attendees and they ended up moving it to the local elementary school. There were over 200 people in attendance with many people expressing concern at the increased level of crime we are experiencing in Hout Bay.

A young lad spoke to the group, a tall good looking guy who is the head boy at Silikamvas  a local school in the informal settlement. He spoke passionately and eloquently about the fears the students have traveling back and forth to school. Another guy spoke about the issues he has living right next to the township gates, about how unmanageable crime is. The crime stats were read and a very dry presentation of a mind map was spoken through.

The issue is that police distribution is driven by the census results and the census takers just lay about in the shade. No one was willing to let strangers into their home to take stock of all their belongings in a society where people regularly rob you of said belongings, therefore they submitted incomplete figures and our area’s population was stated as approximately 30k, however based on the analysis done by a local pilot the real figure is closer to 66k. The informal settlement alone is estimated at 30k, so in reality our entire police force should be allocated only to one of Hout Bay’s informal settlements, Imizamo Yethu, not to all of Llandudno, Suikerbossie, the harbour, and the rest of the valley. Even if we didn’t have such a high level of crime we would be under-resourced.

We had promises from our representative in charge of Safety and Security  JP Smith.  I for one feel neither safe nor secure.  He even had the nerve to try and joke about the Burning of The White House.

Tempers were boiling and words were flying, but the usual level of lack of care was exhibited by our councillor Marga Haywood, she is so unimpressive and ineffective. At least JP Smith talked the talk, as to whether he will actually have any effect will remain to be seen. Hout Bay is such a beautiful place it breaks my heart that it is so full of violence. How many stabbing victims and raped children will make the government wake up to this crisis?

I felt like the group meeting was still rehashing the same points as always, nothing changes except the crime stats. Rape has gone up 200% but only the National Crime commissioner can know the number, we can only be told percentages and statistics. They tried to reassure us that it’s ‘only in the single digits’ but one woman raped is one woman too many and 9 is still a single digit, and 9 is way too many.

Sometimes I get discouraged by the way we are forced to live, looking over our shoulders. I had to pop into the ATM to get cash and as the guard was nowhere to be seen, I took my pepper spray. I would have taken my tazer had it been in the car. Yes, I have a tazer. Next on my list of desired acquisitions is a paint ball rifle adapted to use pepper balls.

We left the meeting and went off to grab dinner at Cassarechio which is Norman’s favourite Italian restaurant and I got a nice winter tummy warmer of a dinner of spaghetti bolognaise and we headed home.

Wednesday I had the nurse pop round work to test me for a new policy, they need to take blood and urine etc to test that you are not about to drop dead before they insure you.

I left work a bit early as my pedicurist Vanessa popped round. It is so cold I kept my socks on til the last minute! Brrrr. But it is so nice to have her come to the house.

Thursday we had a team lunch booked at Borage Bistro.

I had heard great things about the restaurant and the chef since it opened and was so excited to try it. Norm dropped me off that morning so that I could have a drink to celebrate with the team. 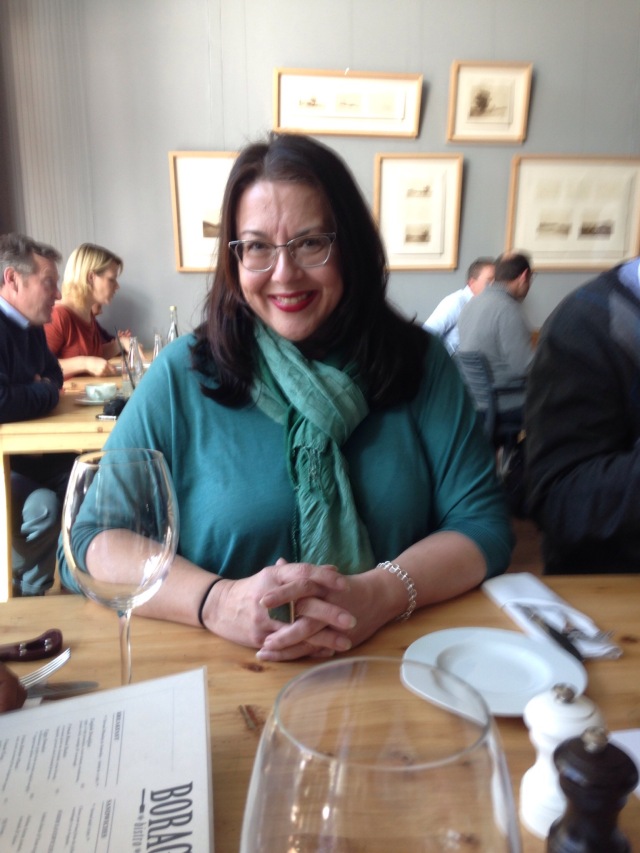 The team took a few bottles of a nice Spanish red with them and I ordered a bottle of Sauvignon Blanc which comes from the Almenkerk winery. It was lovely and light and crisp, I loved it.

We all ordered our food from the specials menu. 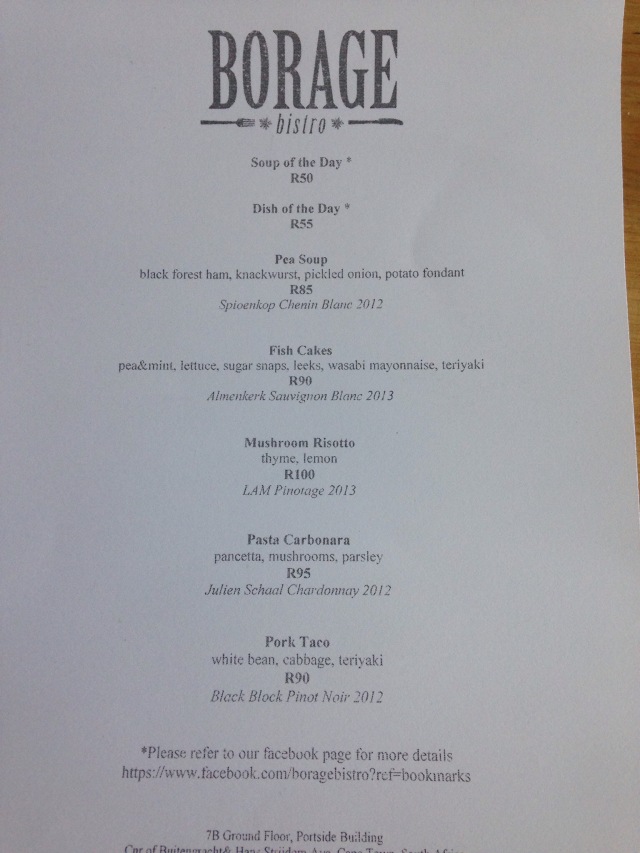 I ordered the pork tacos, I love carnitas so I was expecting a lot.

I was disappointed on many levels.

The service was sporadic, not because of the waitress but because of the kitchen. They were passing over the dishes a bit slow. We told the people served not to wait for us as their food was getting cold.

Lizelle had the pasta, we were joking it looked like pot noodle. She said it was nice.

Guy had the chicken salad at R65 which looked nice. He said if he made it at home he would had added more chicken but it was sufficient. It was chicken, bacon, tomato, avocado, honey & mustard. 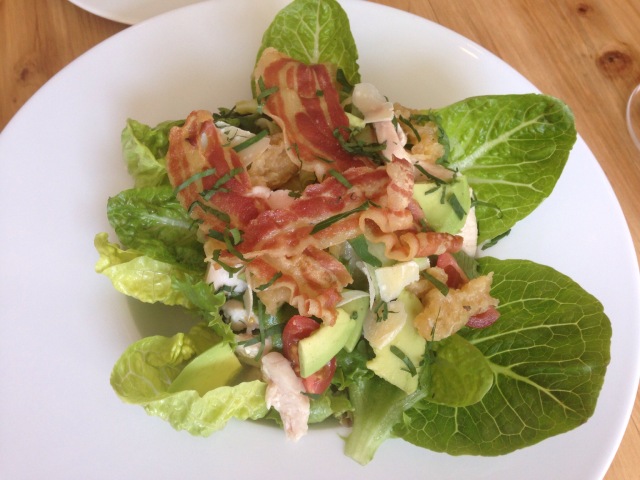 The pork tacos were nicely presented in a big wooden bowl thing. 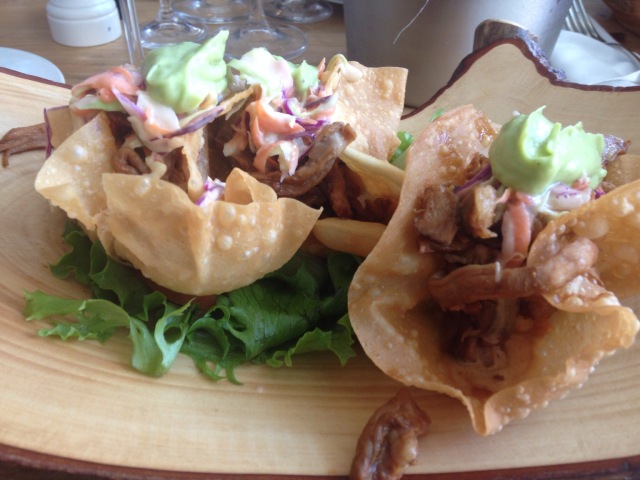 I’m not sure if they make their own tortillas and then fry them or buy commercial flour tortillas and then fry them. Or were they poppadoms?  They were impossible to eat and the shells shattered as soon as you tried to bite into one. You need the heavy texture of a corn tortilla for a taco, not flour. The flavours were nice, I enjoyed the sort of fusion of a pulled pork sandwich topped with coleslaw and then served in a taco. I just think it lacked something in its execution and delivery,

The meat was riddled with large blocks of fat.

You had to do a quick sift through the taco for fat blobs. It makes me want to heave a wee bit to think about it now. Sorry you have to look at it but I wanted to show I wasn’t exaggerating.

I expected dry shredded meat like carnitas. This was very moist.

It had white bean purée instead of the traditional borlotti/pinto beans which might work, but they needed more flavour, maybe a wee bit of cumin or some chili to lift it.

The portions for the salad and the risotto were tiny. The pork tacos were the largest of the choices we all had. The men who didn’t have tacos were still hungry after we ate and so we ordered 4 of their Food Boards.

They were lovely. That seemed to fill the gap.

Charlton had the brownie. He said it was good.

Norm collected me at 4 after far too much wine with my lunch. I was being collected at 6 for the Launch of the Xtraordinary Women Inspirational Evenings.

We had a lovely evening, it was put on by the students at the other campus to the same school my daughter Lily attended, CPUT. It was all very professional and well done they should be proud. I would never guess it was first year students.
It was lovely to see everyone. It seems my bestie Retha and I have no time to see each other as we are both so busy with work.

The wine sponsor was Bon Courage who provided a lovely rose sparkling wine.

I got home late and was so tired but Friday passed quickly. Lizelle and I took advantage of the midday sun and walked over to The Foodlovers Market and had their salad bar for lunch.

We had so many days of rain and howling winds it was nice to have a sunny day yesterday and today. It is sunny but still bitterly cold. It is about 12 celcius every day.

This morning it was bright and sunny but cold, all of the book club girls were meeting for breakfast at La Cuccina to celebrate Dawn’s birthday. It was so delicious. I had the Eggs Benedict with crispy bacon which is R58.

They serve the cappuccino with a charming little shortbread heart shaped cookie.

We had a good natter and a nice meal and then I came home to collect Lily and we headed off to Blue Route Mall. There were still some sales on and I got several tops and a pair of jeans, several jackets and a pair of trainers. Lily was lucky to find everything on sale. She got a great buy on a warm winter jacket.

We had a lovely day but the entire world seemed to be there as it was the 1st Saturday of the month. Never mind, we survived. We stood about half an hour at Mr Price. Very poor show. How can you not realise you will be busy on that day?

The girls are out tonight so Norm and I are relaxing at home. Tomorrow we are out at a jazz event so we are taking it easy tonight.

I do hope you all enjoy your weekend everyone.