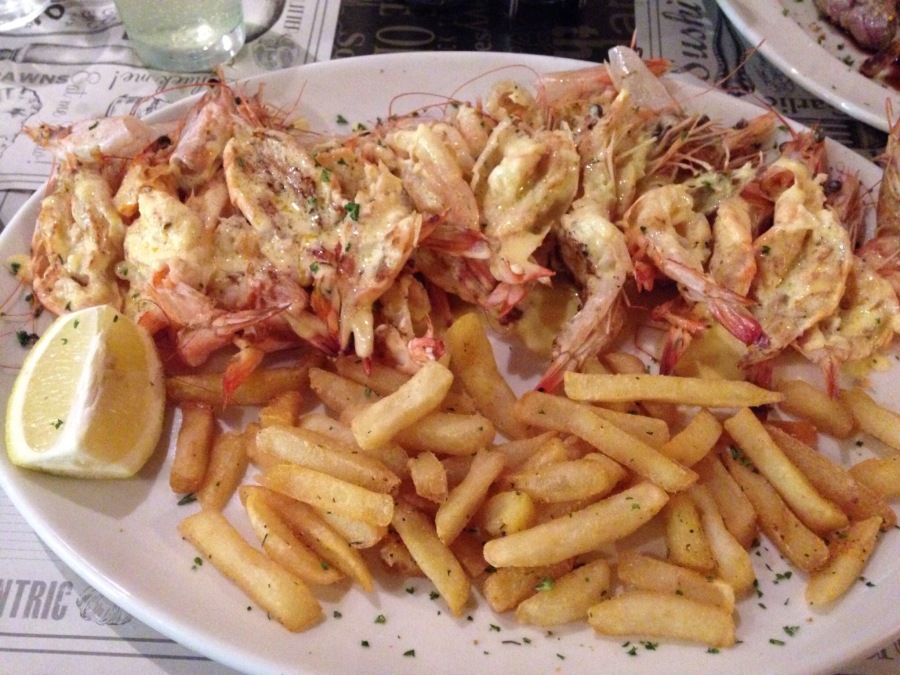 One of the few advantages of so much load shedding is that it gives me a legit excuse to go out for dinner. Not that I’ve ever needed an excuse, but still, it’s nice to be legit.

We are in the middle of being load shed as I write this, at least WordPress is still available. We are without power from 10.00 to 12.30. The daytime outages are not so bad, unless you have a gardener in and an electric lawnmower and strimmer as we do, but he can just do the beds. Our garden is small but it is over full of plants and the trees badly need trimming. We gave Mzudumo that direction when we first moved in, but he decimated the vines and ground cover and bushes so I would rather get a landscaper in to do a proper cull for the winter.

It is still a lovely view, that’s the back of Table Mountain in the distance. 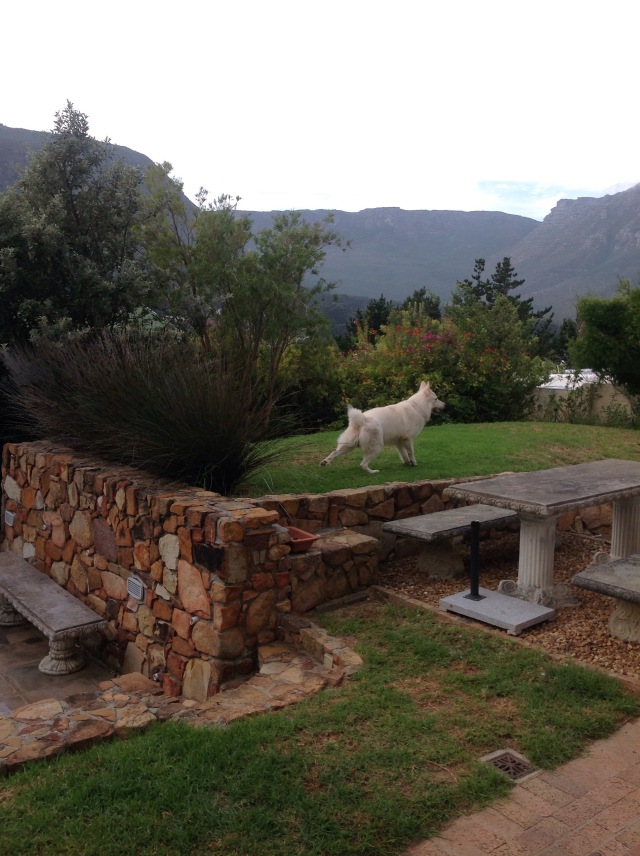 And that’s Navajo our Swiss Shepherd contributing to the demise of my grass.

I do love him, but owning him is a bit of a culture shock for us Pomeranian People.

This is Prince Panda. My shadow who sleeps on my pillow. 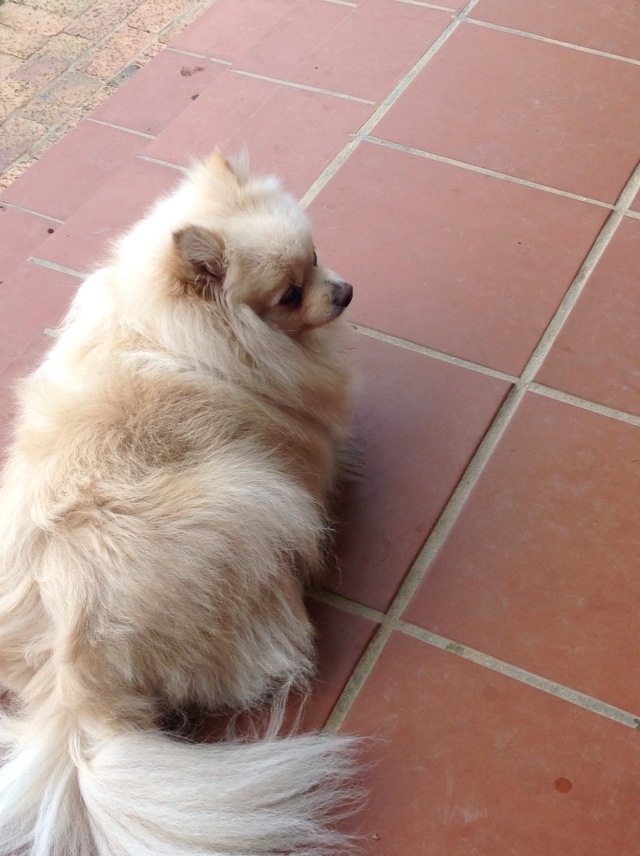 And our old girl Pixie, the matriarch of the pack, just chillin’ by the pool. 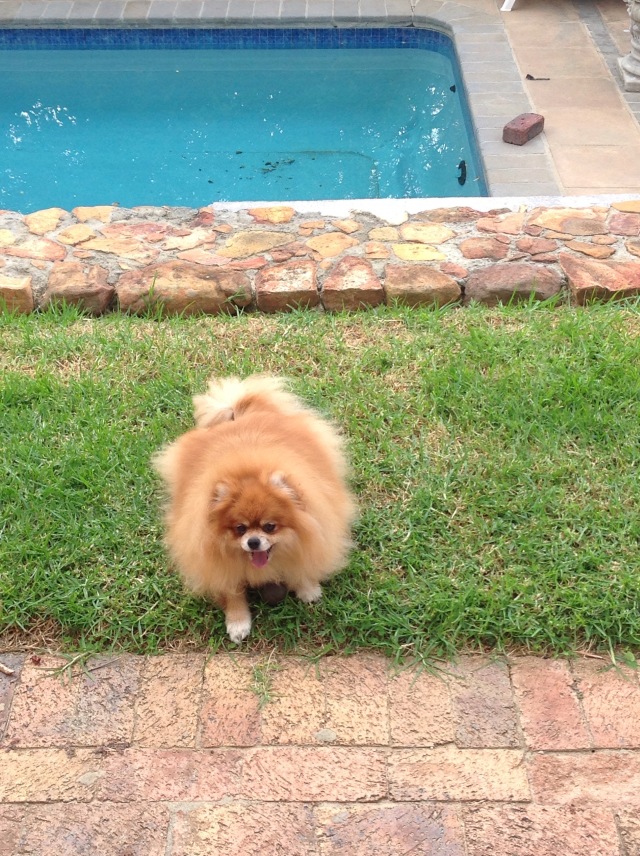 Pixie and Mzudomo are great buddies, he tosses her up in the air and cuddles her and their ritual is that on arrival he settles down and has a smoke and a cup of coffee and grooms Pixie. We never asked it to be part of his tasks, he asked us for a brush and ever since they have a communal adoration session accompanied by grooming. It’s too sweet.

As you can see, there is quite a size difference between my boys. 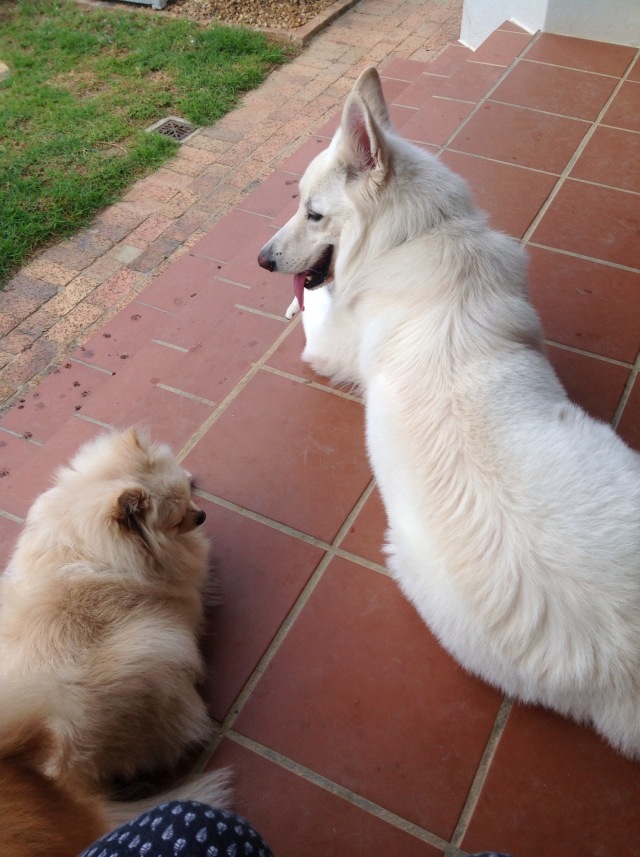 We bought Navajo to train as a protection dog after our armed invasion, but his training has been rather sporadic. He is not keen on new people, he is very cautious and sometimes even aggressive. But with the family he thinks he is another Pomeranian and wants to sit on you and cuddle. He’s a beautiful boy.

Navajo has unfortunately taken a strong dislike to Mzudomo. We have to keep him inside as he goes insane if Mzudumo comes near the house. Yesterday Mzudumo knocked on the door into the pantry from the garage to get car detergent and Nav lunged at him so I grabbed his collar just to pull him back, thinking he is bluffing and all bark and snarling teeth like always. But when Mzudumo turned to walk away Nav leaped past me and nipped Mzudumo on the back of his leg. He barely broke skin and Mzudumo didn’t even feel it, but still it is worrying in one regard and brilliant in another.

Bad as we must keep him locked up when Mzudumo is here to keep him from biting again, but great as it confirms I can count on Nav defending me should the need arise.

Saturday morning Norm took Caitlin to the airport. She flew to George for a long weekend to see her Dad and brother and Amber. Some of their other girlfriends are also in town so they are having a get together.

Afterwards Norm came to fetch me and we went for brunch at The Riverway Cafe.

We were starving and asked if they would still serve breakfast and when given the thumbs up, ordered The Kitchen Sink which consists of 2 eggs, bacon, a beef and coriander sausage, fried mushrooms, beans, fried rosa tomatoes,toast. Everything except the kitchen sink.

It was beautifully presented. Love the heart shaped cutting board. 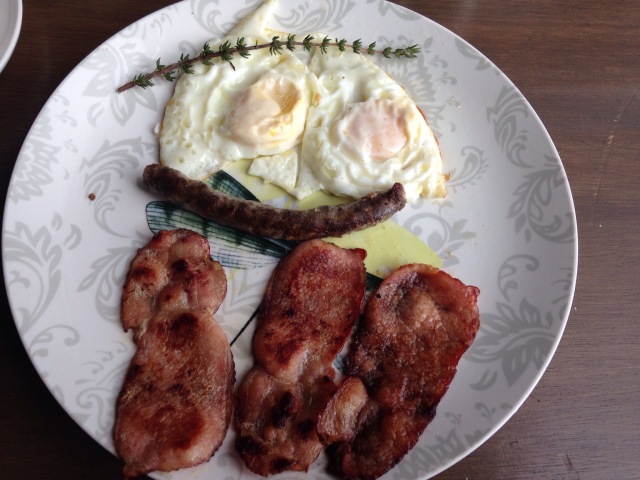 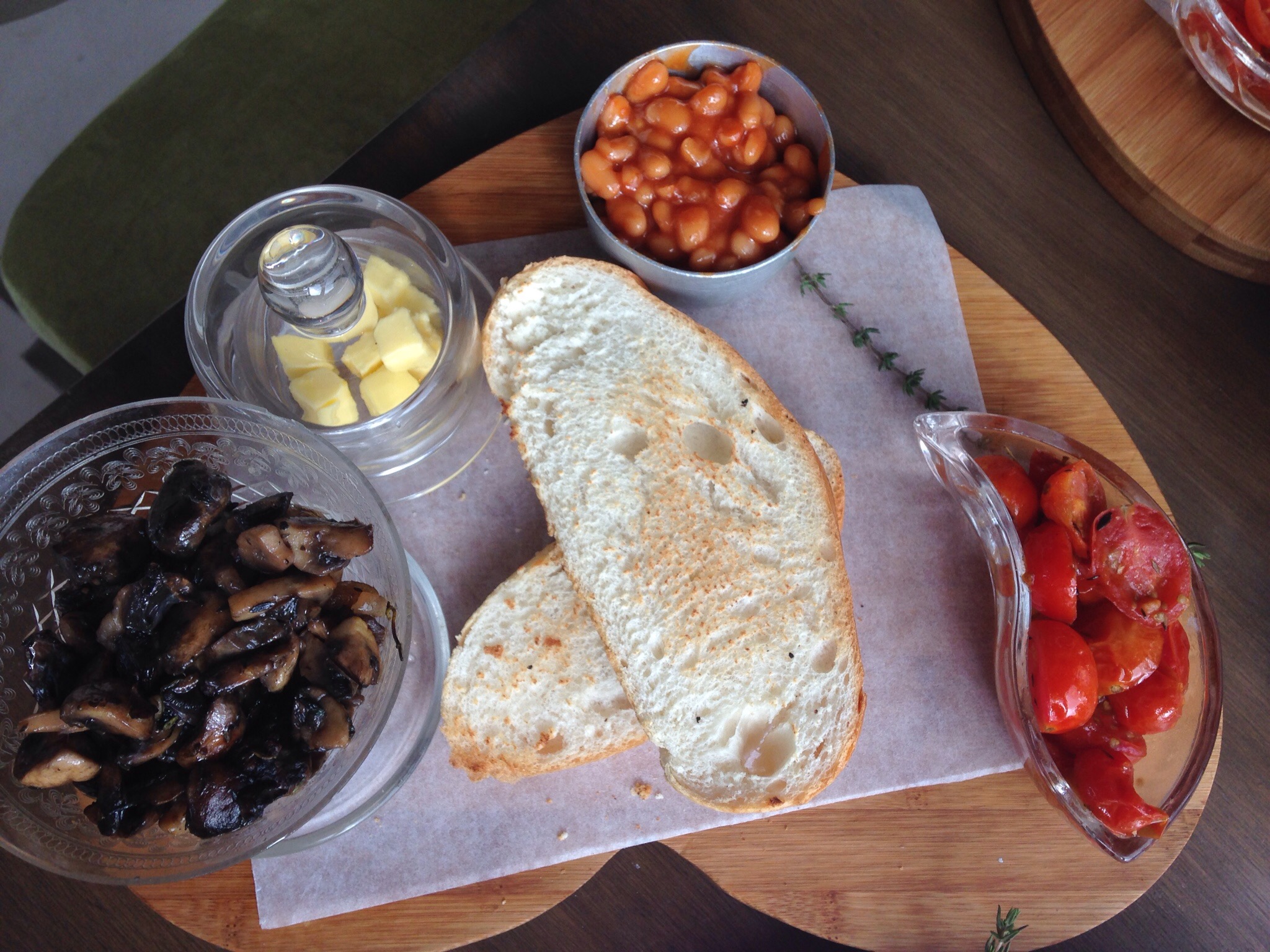 But the details are always special with anything at Riverway. The array of stunning baked goods. Even when photo bombed by sexy Spiro husband to the owner, the lovely Julie. 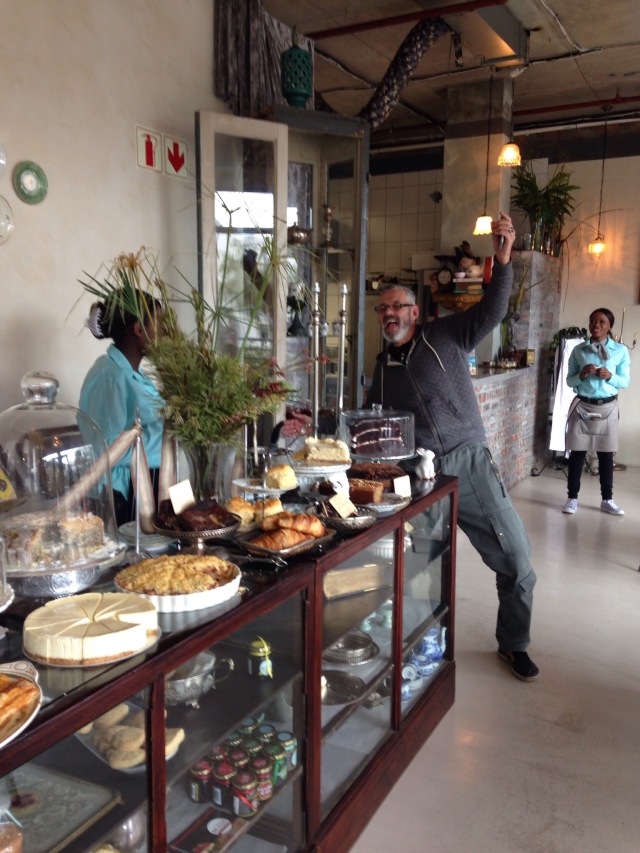 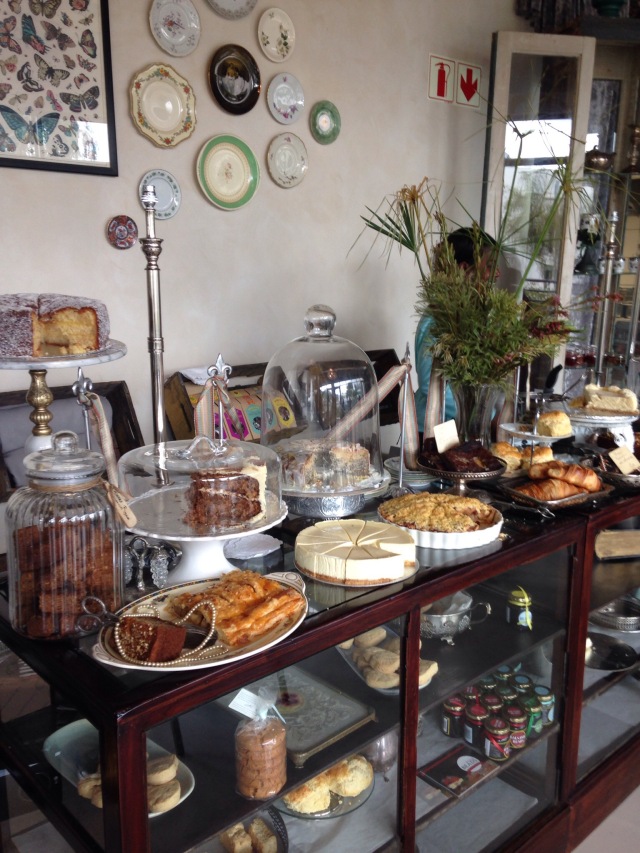 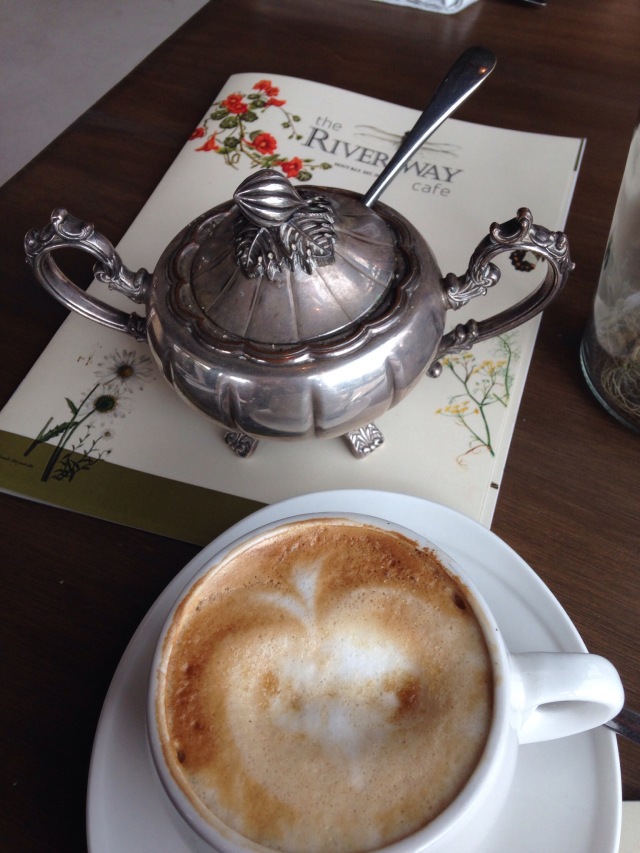 The sugar bowl looks like you may have inherited it from your late Aunt Agatha. A proper heirloom.

I could barely put a dint into all that food. I gave Norm a lot of it and I just had the toast eggs and bacon with a bite or 2 of each side. It was delicious.
We had a few errands to run, I needed my new glasses adjusted and we needed to go to the chemist and do a food shop. I bought a couple of pairs of leggings as boot weather is just starting and I love boots and big baggy tops.

We came home and relaxed a bit and spent the afternoon doing bits and pieces until the electricity shut off at 18.00 but luckily the light was just fading and we had plenty of candles as that was the thing on my list which I forgot 😦

The electricity was to be off until 20.30 so we decided to go out and get dinner. I had to get ready by candlelight so who knows how I looked. I still don’t.

We headed to Pescarne as we heard they have a generator and I knew they had this special on. 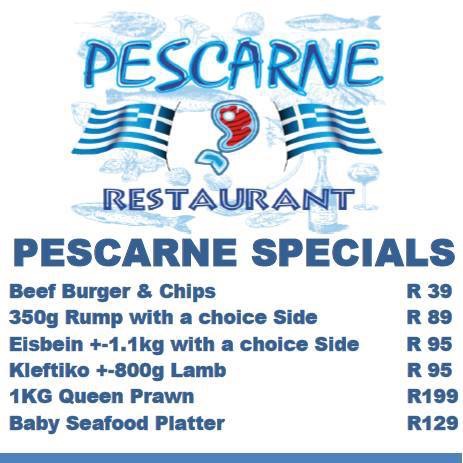 It was nicely lit up which was so welcoming with the majority of the village in pitch blackness. We saw some friends outside eating and had a quick chat then we were seated sipping cocktails.

I ordered the Queen Prawns special, 1kg at R199. 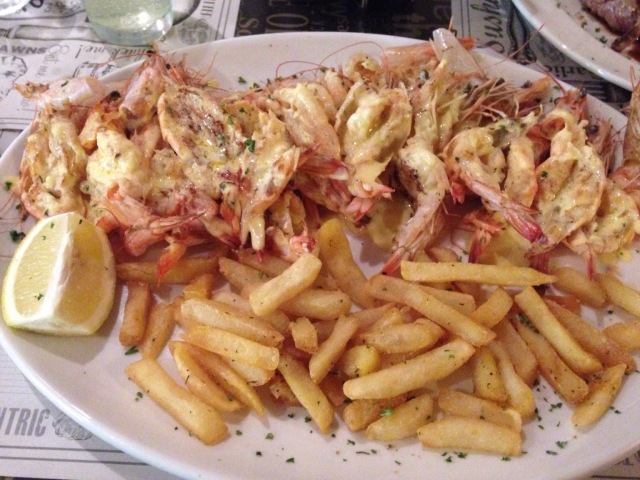 Regular readers will know that my only issue was the lack of lemon butter so I was thrilled that they had changed from the sharp dips they served the prawns with last visit and actually drenched it in a lemony butter which was divine! Great move, I hope they keep that up. Again I gave my chips to Norm and just focussed on the prawns but still couldn’t quite finish them. But I gave it a good go.

Norm had a 350 gram fillet with chips. 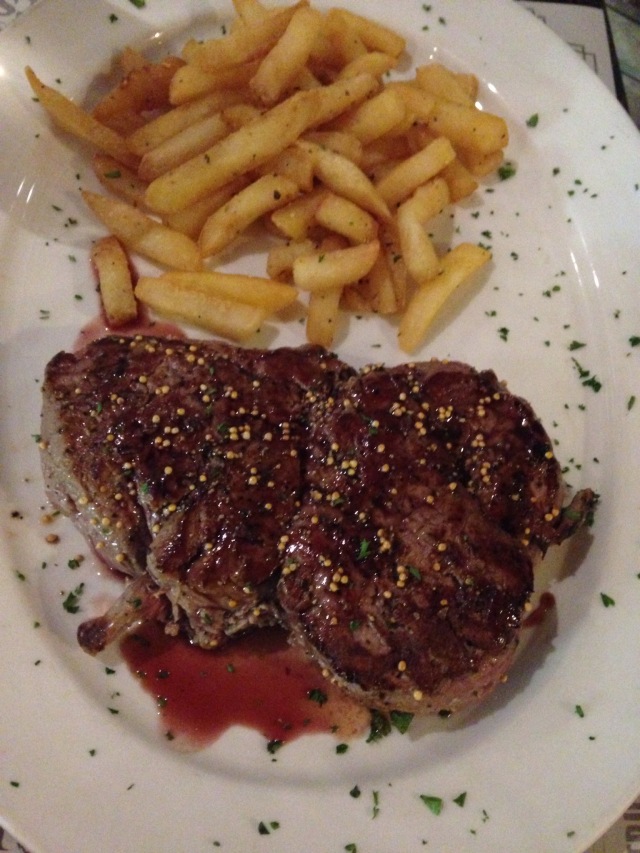 We really enjoyed it all and both of us had a delicious meal.

Lily and Josh got home late last night and today they have driven back to George. We are waiting on the electricity to come on so we can watch a movie or something, I am still in my pajamas. It’s going to be a laid back mellow one. I hope you enjoyed yours.