We have had a sad and stressful last few weeks, my mother in law had a bleed to the brain and passed away. Norm was the oldest of 5 and helped raise his siblings and he and his Mum were very close. At 85 she was still living on her own so she was doing quite well both mentally and physically, she was just a bit frail. She hadn’t been ill, she had what must have been a small stroke then the following night she had a catastrophic bleed. Luckily Norm had rang and chatted to her that day. Mavis was a lovely lady, and she was so accepting of my 3 children, she saw them every New Years when we lived in the UK as we always went up for Hogmanay and the family rented a big hostel for us all. It was the best NY Eves I’ve ever had.

We miss those celebrations.

We have to comfort ourselves that Mavis is with her son Derek and her husband Duncan. But she will be missed by those of us still here.

Norm is going back to Scotland for the funeral but I have no time off from work left and the flights are very expensive so can’t take unpaid leave. We will all have to support him from afar.

Friday night was a police operation and Norm participated in that so I just relaxed at home and waited up for him to come home safe.

Caitlin went to the Up The Creek Festival this weekend and she starts her new job tomorrow. Lily and Josh came down for the weekend and she will come back when Norm leaves as we will need the help around the logistics of feeding and walking the dogs and dealing with Cordelia. Lily doesn’t start her job until the end of March so she has been spending her time with Josh in George.

Yesterday Norm and I were invited to our neighbour’s birthday party so we went out to find a gift and do a food shop. We decided to go to The Riverway Cafe again to have lunch.

We were ravenous so I devoured everything before I took a pic, but we ordered piggy poppers and the pulled pork baguettes with chips. The poppers are amazing, if you want to see a pic you can refer to my previous blog. The baguette is served on a large wooden cutting board. The chips are very thin and come in a little bowl. The pork is lean, juicy and full of flavour, the slaw is crispy and fresh with cabbage and maybe apple? There was a taste of mustard either on the bread or in the slaw I wasn’t sure.

I couldn’t manage all the bread, I simply ate the filling, in the southern states we would serve it on a soft roll, but the baguette is a nice twist, just too crunchy for my preference. But it was delicious.

We were very full but the dessert table looked so stunning!

Julie has a few different ladies who contribute to this table to make sure to avoid the monotony.

I love how Julie has mixed the open industrial finishes with the romance of old silver and lush fabrics. I so adore this chandelier it’s so stunning. 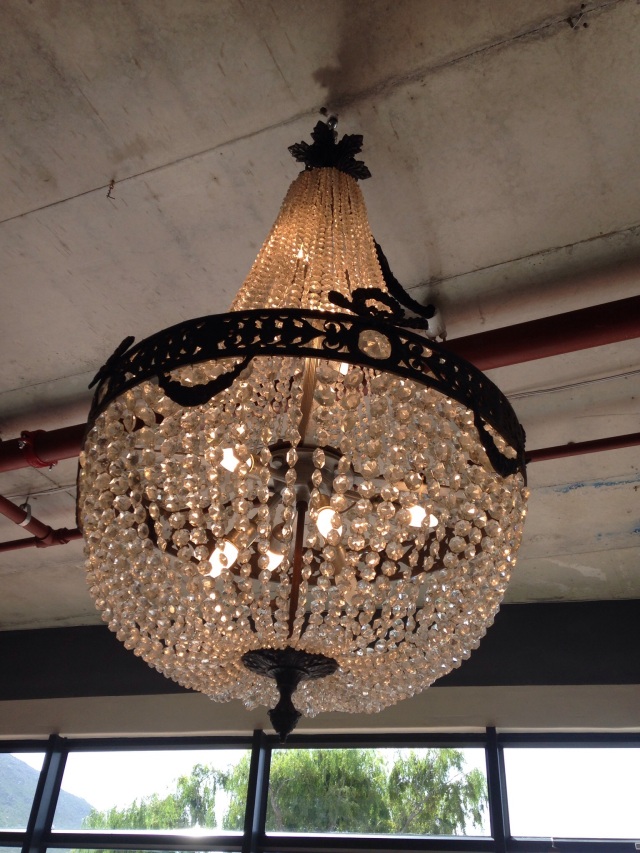 We were surprised by Julie making up a tasting plate for us! It had a gorgeous caramel, chocolate and shortbread concoction, it was like a millionaire bar but less sweet, really divine. There was a pear and almond tart with cream and a chunky monkey brownie. The brownie had caramel oozing from it, was rich and really delicious.

We went to do a grocery shop and bought an orchid for Kate’s birthday.

We were drawn down the hill by the sound of bag pipes so we headed down to the party. We left it til after 9pm in order to let things get swinging, it was full of beautiful people as Kate is in the film industry. I’m so bad at these things when I’m sober. If people start the convo I can hold my own but I’m not great at breaking the ice. And walking up to a group of chatting strangers is my idea of hell. I’ve also twisted my hip somehow and am in a lot of pain so I was impressed I made it to midnight. Norm brought me home and he went back to socialize with all the Scots, but I had enough by then.

Today I’m going for cocktails with my friend Retha as we’ve been too busy to catch up.

The next few weeks will be a challenge for Norm so I’ll be wishing him strength as well as missing having him here with me.