When I received the notification that La Mouette had implemented a new menu I was of course front of the queue to try it.

We had thought that Caitlin and I would be home alone this week with Norm off in Scotland so we booked for the 2 of us to celebrate starting her new job, but then Lily was summoned home to help us all cope with the animals and everything else that Norm usually takes on, so we increased the booking to 3. Lily is a very fussy eater so I wasn’t sure if she would cope with the adventurous menus that La Mouette usually produce but was willing to take the risk.

I had been lucky that the drama I have been having with a rather rubbish service provider had resulted in a thousand rand being reimbursed to me that day, so it funded the majority of our dinner. Thank you universe!

We arrived and were seated in the front of the courtyard, by the front gates. My girls are so stunning aren’t they?

The gardens and the fountain are so lovely, it is such a gorgeous venue. However the problem with sitting at the front table is that you get constant cigarette smoke wafting in from the diners who have nipped out the front for a fag. So I will make sure to ask for a different table in future. I really hate cigarettes especially while trying to savour fabulous food, it taints your taste buds.

The new Mid Summer Tasting Menu was 6 courses for R295 or with wines R495.

They brought out a platter of the 3 varieties of bread and the girls got stuck into that, I did warn them that there were 6 courses to follow and to go easy but they were hungry and made a rookie mistake. But damn that is some good bread.

For the 1st course we had:
Tomato salad which consisted of Basil oil, olive powder, smoked aubergine, buffalo mozzarella and tomato essence.

As I am not a fan of basil I was a bit worried about this one, but wow!!! The flavours were just divine! Sweet, yet tangy, the tomato essence brought an acidic cut to the mix of textures and flavours. It was gorgeous. Even fussy Lily ate every bite and then soaked up the sauce with her remaining bread. I couldn’t blame her as it was too lovely to waste a drop.

The dish was topped with 2 of the crispy mushrooms but it also had a variety of other mushrooms, these were a bit too ‘slimy’ for Lily and as she does not eat onion in any shape or form the burnt onion topping put her off as well. But I did really enjoy this one, the panna cotta was gorgeous and the burnt onion gave it the kick it needed.

As Lily did not eat hers she sat playing with it and in doing so noticed that her mushroom had a rather rude shape.

On that note we shall move onto our next course. We each chose a different option for this course.

Lily had the Smoked duck with Gorgonzola croquettes, celeriac puree, confit fig and candied walnuts. She really enjoyed this, she thought the candied walnuts were the bomb. I remembered those from the last visit as they topped the amuse bouche so I felt her pain when she launched the largest one off her plate while trying to spear it with her fork.

Caitlin chose the Seared tuna Asian salad which came with Pickled cucumber, shaved vegetables, charred mango, nam jim dressing and peanuts. It was quite a large portion and as she was full of bread she only finished half of it, so Lily and I halved the other bit and got a taste too. The tuna tasted very fresh and was perfectly cooked, crisp on the outside and very pink in the centre. As a share Lily and I both gave Cait half of a cheese croquette in exchange.

This pic also highlights that the Samsung seems to take much better pics than the iPhone, however my friend Retha takes amazing pics with her iPhone so maybe it is the fault of the photographer haha.

I ordered the Truffle and cheese croquettes which are served with Mushroom pesto, truffle dressing and shaved parmesan.

I would walk through a desert for those croquettes. Luckily no desert was involved, just more dark iPhone pics. 😀 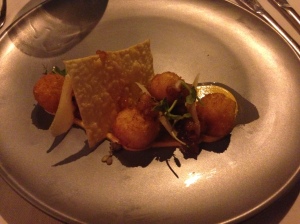 I loved the sharp tang of the parmesan served with the croquettes and the various other sauces were just perfect with it. It was probably my fave dish of the night.

The next course also had 3 options, I really expected my Pescatarian daughter Caitlin to order this one, but she is also a big mushroom fan and decided to try the mushroom option instead. So I am sad to say no one tried the Bouillabaisse which consisted of Line fish, crispy prawn, mussel, confit tomato, smoked leek, potato, parsley puree and croutons.

Lily and I both chose the Beef rib eye with Buttermilk mash, watercress emulsion, caramelized shallot and horseradish. There were 2 nice sized chunks of rib eye which were rare and perfectly cooked. Lily doesn’t like shallots so I got a double portion and they were brilliant with the meat and mash. I did really enjoy this course.

Caitlin had the Mushroom Pot Sticker served with Satay, charred endive, pickled mushrooms and white bean puree. She thought the filling of the pot stickers to be a bit too intense to serve as a separate item, she thought it might be better as a side dish with something less intense. I didn’t taste this so I only have her feedback to go on. However I am not a huge fan of foam and I had seen this dish before so it did not appeal to me. 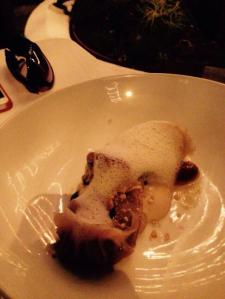 The next course of Gin and tonic described as Lemon curd, lemon sorbet, juniper meringues, tonic jelly and foam had sounded lovely and refreshing as I love lemon curd and I love lemon sorbet. However I do not love either gin or tonic and the tonic jelly was incredibly bitter. None of us could eat this course, we took one bite and sent it on its way. Not a fan at all of that one. Maybe people who do like gin and tonics might like it but not for either of us.

The next course sounded like a strange way to end the meal, more like breakfast than dessert but this was one that Lily was very keen on.

They bring the dry ingredients first:

Then they pour on the vanilla milk and voila, dessert!

I love the taste of malt and this was such a lovely ending, very sweet and crunchy and so yummy. We all 3 licked our bowls with this one!

We chose a great night to be out as Load shedding is at stage 2 so all of Hout Bay was without electricity, by the time we got home power was restored and we could chill out a bit then head to bed. This morning when I got up Lily came in to tell me she had been ill all night. I’m not sure if it was the food or a virus, the only thing she had that neither of us had was the duck, not sure if it was too rich for her or what happened but she looked dreadful when I headed off to work.

This week we started receiving organic veg from Harvest of Hope. The Harvest of Hope organic vegetable box was started as a solution to Abalimi Bezekhaya’s micro-farmers, providing a reliable market for their organic produce. Each week we will pick up a box of freshly harvested organic veg suitable for a family of 4. It forces us to try new things and it means we are eating gorgeous fresh goods. Our 1st night Caitlin cooked and we had crispy red cabbage, fried potatoes and onions cooked in coconut oil and a big salad of the most divine crispy lettuce – the freshest I have ever had.

The following night I made eggplant/Aubergine Parmigiana and for my sauce I added in a huge bunch of parsley as it was in the box and I don’t like it but as I was whizzing up the onions and peppers and tomatoes in the blender I thought it was a perfect time to use some of it up. It made such a difference to the sauce. Was really gorgeous. However we thought the aubergine tasted a bit underdone as we hadn’t done the breaded option as we are trying to eat healthier so there was no precooking and the cheese was getting overdone so we took it out. But it looked perfect 😀

It was oozing with tons of mozzarella and ricotta and tasted delicious but after we finished we noticed on the little recipe inserted into the box that it had a warning to never eat uncooked aubergine as it has a toxin which can make you very sick. Oops. The aubergine was not raw, just undercooked so not sure if it was that or the excess of cheese but we all ended up with a bit of a dodgy tummy. I think this just left Lily a bit vulnerable on a digestive level so that combined with the richness of the food at La Mouette is what set her over the edge. Poor girl, I just checked on her and she sounds as if she has perked up a wee bit.

We girls are all at home tonight so we will just chill out and watch a movie, I love these special times with my girls. We all miss Norm though.

Today is Mavis, my mother in law’s funeral in Scotland. I wish we could all be there to support Norm but he has a big family who are all very close, I am glad they will be there for each other.

RIP Mavis. You were a wonderful lady.