Everyone still felt a bit down about Robin Williams as the weekend rolled round. I was happy that Norm was coming home as he had been away for work and a lot more responsibility falls on me when he is not around to share the household tasks. It takes a village to keep our house running it sometimes seems. Managing staff, kids, dogs, cats, as well as the feeding and walking of the aforementioned furry creatures – on top of an hour and a half of my day allocated to travel to and from the city and a very stressful work situation and sometimes I feel I may snap. Norm helps to keep me balanced and able to cope with all of my stresses.

We were booked in to see Days of the Dinosaur which was on at the Cape Town International Convention Centre in the CBD. It is very near my office so we made a transport plan for Norm to get a lift in with the girls and drive me home in my car, but we still had 3 cars in the city. The show has been touring the world for years. We first saw it in London I think – it was a long time ago. We also saw it in Atlanta when home visiting my Mom one year. It is usually held in a museum, and I think that makes for a better atmosphere. There is a little 3D movie now which is new, we never saw that at our other visits. Our family are fascinated by dinosaurs. I used to read to my kids about dinosaurs when they were tiny. My son Trevor had a huge bin of them and took one everywhere he went, he loved them the way other boys loved cars. When we attend this sort of exhibition we always read all of the details on the signs, talk about how big they would have been and discuss the places we have been that they were discovered. We made it an expedition of discovery. The models are just fabulous. They breathe and even their heart beats.

And of course, we acted silly.

We had such a giggle. We were squashed into a sweaty little tent to watch a 3D film at the end of the tour. But when we sat down Norm’s seat had something icky on it and I made some remark about a dinofetishist in a raincoat. I’m glad Caitlin’s beau Vic can tolerate our bawdiness. The last time we were out was the circumcision discussion. The film wasn’t much of a plus to the show and it was full of screaming children.

After the tour we walked up to Col, Cacchio for pizzas. In my opinion, they have the best pizzas in the city. We all had cocktails. Yummy strawberry daiquiris.
I had a half and half pizza:
SMOKEY BABE which sounds bizarre but in reality is heavenly, is Asian deboned Smoked Ribs, Red Onion, fresh Corn, Spring Onion, Mint and Coriander. A whole one costs R115.
And the other half was the NACHO LIBRE which consists of Jerk Spiced Chicken Breast Strips, home-made Guacamole, Tomato Chilli Salsa (freshly chopped), fresh Coriander and Sour Cream. It goes for R99.

But I wolfed it down before I could treat you to a pic. Instead here is a pic of Caitlin and Vic. They look good together 🙂 it’s nice to see her smiling.

We came home and Peggy slept over with Lily. They have been friends since they were in primary school. Too sweet. We had a Mindy Project marathon. We love this actress, Mindy Kaling, she is very funny and so talented.

Saturday was all planned out, I had a late lie in at least, but was up by 10 and out for an half hour of torture at the laser clinic then Lily and I went to Constantia for lunch at Kauai and a wander round the shops. We had wraps but the chicken tasted odd, ‘fake’ as Lily called it. More tofu than chicken texture. I picked it out. Bleh. The smoothies are yummy there but always a bit overwhelmingly bananaish for my taste buds.

We then went off to Meltz. They are having a huge sale. They have been bought by The Hub so I hope they continue to have the same level of bargains. I got 2 ponchos, sweater wrappy things for next to nothing, a pair of lovely grey boots, and 2 cardigans, one long black one which I suspect will become my best friend, and one bright turquoisey one which will be great for work. As a big girl there is often nothing in the sales which fits us as there is not enough stocked in the first place. Buyers obviously don’t analyse the purchasing trends and stock accordingly the following season.

We went home and Lily’s other friend came over and they all dressed for a superhero party. How cute are they? 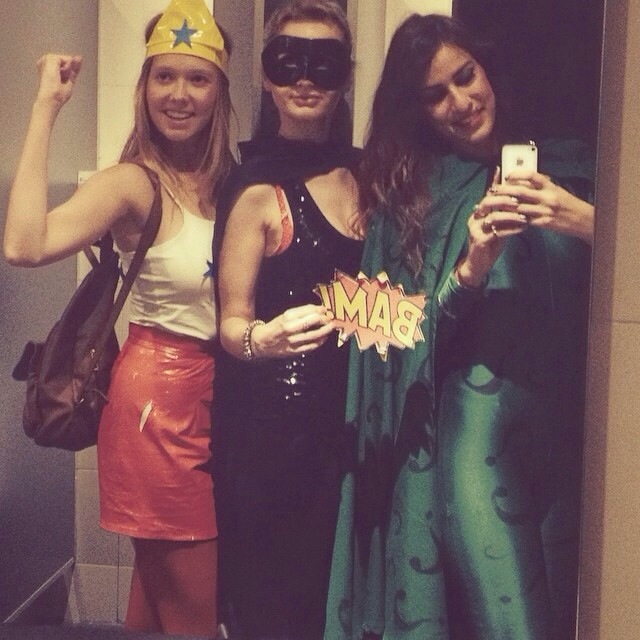 All Glamazons in training as they all are very tall.

Caitlin had her friend Sam over to stay for the night and Norm and I had a date, so off we dashed to Papino’s Restaurant in Hout Bay. It is one of our faves, the food is always consistently delicious, the portions are generous and the prices reasonable. They have been around under different ownerships for 30 years.

Norm and I often have exactly the same meal here, it is always so gorgeous we don’t want to miss it. So again, we had the fillet steak. It didn’t say the weight but it is close to 250-300grams in weight I’d guess. ​it was R135.

We also ordered a side of delicious butter fried mushrooms. I had a baked potato, but instead of sour cream I had a wee bowl of what appeared to be salad dressing, but it was yummy! I forgot to take a pic before I mashed it all together, but trust me it was delicious. The meat was tender, perfectly cooked, the vegetables were perfectly al dente, the sauce rich with flavour, the potato nicely cooked. I adore those wee mushrooms.

We were really enjoying our evening out together and a nice bottle of crisp Du Toitskloof Sauvignon Blanc.

the wine was so perfect for a hot summer night! I don’t care that we were eating red meat! I say eat and drink what you like.

I have had a variety of dishes here, all were delicious. I think they also have some of the best pizzas in Hout Bay. But we are very blessed on the pizza front!

While finishing our wine we noticed a boy screaming at the door. He was about 3 or 4, hard to say. He was loud and obtrusive. We kept looking for his mother, she appeared to be outside having a smoke. Then she came in, glass of wine in hand and dragged the noisy kid off.

A few minutes later he is back with his brother, they are racing around the restaurant, screaming at the top of their lungs, at one stage wrestling on the floor with the small one lying on the floor, grasping his brothers ankle while being dragged across the restaurant. After it got to such a volume that we actually could no longer converse Norm went off and told the boys to pipe down as they were in a restaurant. By now it was about 9pm so I have to ask what was a small child DOING in a restaurant? It was too late for him, no wonder he was miserable.

We decided it was too noisy to tolerate any more so decided to skip dessert and coffee. We asked the waitress about the kids and she said their mom is the owners friend. I hope she brings in a lot of revenue to make up for what they lose from people leaving early. I question parents who let their kids run riot just for their own bit of peace, do they have so little awareness or do they just not care?

Luckily it didn’t ruin our evening we just stopped for ice creams for us and our girls and came home to relax with a bottle of wine. Unfortunate for that mom she had to take those wee hooligans home.

When we stopped for ice creams a guy in dreadlocks pulled up, windows down, Caribbean music blaring. Norm and I danced through the car park, I high fived the driver as he cheered us on.

Just another day in Africa.