Most birds tend to emigrate south for warmer climates, but Mandi has always been someone who doesn’t adhere to the ‘norm’ or to what people expect from her. I think that is what bonds us – we never felt the need to be ‘normal’.

I still remember when I met Mandi over 20 years ago in George. I had just moved from Los Angeles to this tiny little town on the coast of Africa. I had met Mandi’s sister Cathi first. We have children of similar ages and we got chatting over the jungle gym and we have remained friends ever since, despite my leaving SA, moving to Northern Ireland, England and then back to South Africa – or Cathi moving to Canada. We will always be in touch and always be friends. Distance does not impact true friendship.

So back to Mandi – she was down in George with her brand new baby Cesco visiting Cathi. I remember she had on some mad stripey wide legged trousers and she had short curly hair and was so quiet. We did not really spend much one on one time or bond then, so fast forward several years to the end of both mine and Cathi’s marriages and we 3 are all now in Johannesburg, Cathi and I are sharing a house and reliving our youth. We were all in our prime and living a mad and crazy life, but having a lot of fun.

This was the period of my life when I met Norman. We fell in love and I ended up joining him in Northern Ireland, then after a few years we moved to England. Cathi came to visit me there briefly, but Mandi and I did not really stay in contact. Then Cathi and Mandi both ended up in Canada, and life continued for a few years and then I decided to come back to SA.

Norm and I came to Cape Town on holiday first so that I could attend a few job interviews and make some contacts, and I was ever so surprised to hear that Mandi was back in SA, much less that she was living in the same tiny little fishing village where I intended to settle down!

When I first moved back I came without Norm, to set up home and get us settled. I was so grateful to have Mandi here as a side-kick. We would just get up on a weekend and get into the car and go on a road trip.

It was the start of the South African summer and we explored the coast, the wine farms, and all manner of roads untraveled by us. We never had a plan, or a goal other than having adventures. I even remember once we tossed a coin to decide which way to go at an intersection.

We found some amazing little restaurants, interesting shops and all sorts of fabulousness – problem is we seldom had a clue where we were and could most likely never find them again!

But we had fun.

I had not been back in SA for very long when Mandi invited me to a braai. I did not know anyone there as I knew only a couple of people in Cape Town. Mandi didn’t even know the hosts as they were friends of friends. They all happened to be lesbian but that has nothing to do with anything. We arrived nervous (as one often is with a group of people who all know each other but you do not know any of them). Nervousness leads to excess of alcohol consumption and the food was not forthcoming which made for a dangerous combo and it got a bit messy. I don’t remember a lot of the details, I just know that the next day I realised I had taken someone else’s sunglasses and my head hurt. A lot. I then vaguely remembered shouting at everyone that someone had stolen my cute little Audrey Hepburn cat eye sunglasses and left only ugly sporty ones and I was holding a pair of ugly ones hostage. (Apparently lesbians like sporty sunglasses.)

We then could not find Mandi’s handbag, which put a damper on my stalking off in a huff with random sunglasses. Eventually her bag was found in a kayak. (Don’t ask.) The problem was the kayak was full of water and the car keys (and immobiliser) were in the bag and therefore underwater.

We somehow managed to get the car started and get home and Mandi somehow got into her security gate with her knackered keys. The next day I found my allegedly stolen glasses in my handbag along with the ones I had taken hostage. Oops. I had to phone a total stranger to confess and arrange a hostage handover.

We had Mandi’s leaving party at Polana in Kalk Bay on Saturday night.

This is our Gemini group posing for what may be our last pic together….*sob*

We have had some majorly crazy nights (and days) there since we have lived in Cape Town. Last time we were at Polana, we ended up dancing with a little gang of dwarf coloured fishermen. This is us before the wheels fell off. 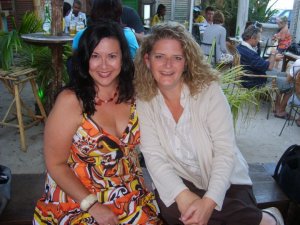 Hanging with the dwarves came in handy when Mandi dropped the entire contents of her handbag on the floor as they were able to nimbly retrieve all belongings from under the dancers’ feet. The party ended when Pixie my Pomeranian jumped out of her bag and peed on the sofa in the middle of the dance floor.

I have endless tales of our crazy adventures. But most of them may not be suitable for public consumption, but they make for some wonderful fun memories.

These are some pics from our last few Halloween parties of me and Mandi acting a fool. 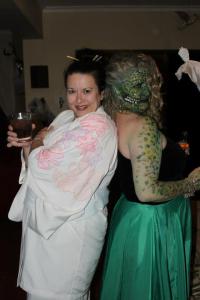 We have had a visit from Cathi since Mandi and I settled here but a visit is not the same as having your friend just down the road. This was us in 2009.

To mark the end of an era, Mandi and I had one last road trip. We went to The Grand Beach Café for pizza and cocktails.

We had a lovely lazy afternoon, sitting in the sun on the beach sipping frozen cocktails. What a beautiful life we lead. After that we went to 12 Apostles and had a Pimm’s while sitting on their patio in the sunshine looking out to sea. I wanted Mandi to have memories of the beautiful venues we have in Cape Town.

I know that whatever I tell her is safe with her. She will not use my stories to boost up her conversations with other friends; she won’t use me as fodder for gossip.

I can trust her, I can rely on her and I can depend on her.

Except now I can’t. Whatever will I do without her?

But this move is not for my benefit – it is for Mandi’s and I must keep that uppermost in my mind. Mandi needs to be near her sister Cathi, she needs a change of scenery, and she needs to be somewhere else other than SA. It is the end of her SA journey. I know that this is what she wants, and I wish her every happiness and success possible. I hope she finds her soul mate, her perfect home, her perfect life – but most of all I hope she finds contentment, peace and joy.

Bon Voyage my friend – I know we were together in a past life, I have loved our time in this life and I hope we still have unfinished business which leads to our meeting in our next life.