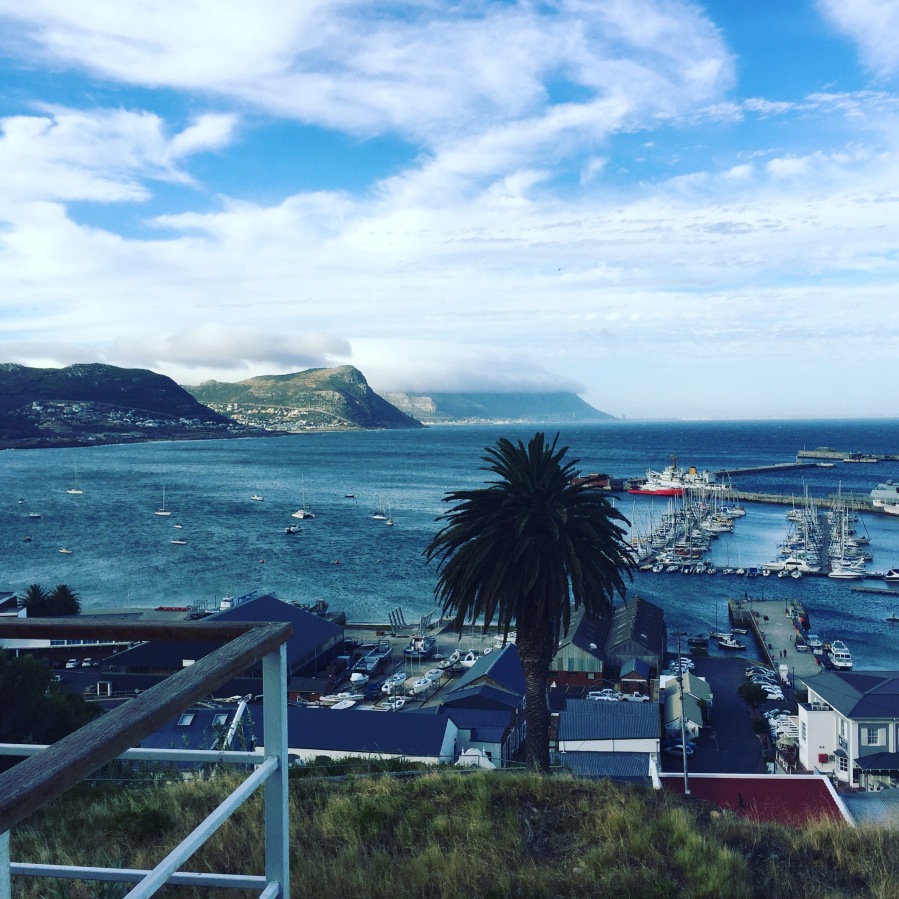 I finished up work last Friday and the season is fully launched. We’re off on the run up to the holidays!

I’m not seeing as many tourists as usual but I’ve been lying low and avoiding the shops.

On Friday after work Norm and I joined Paola, Phillip, Retha and Barry at Cheyne’s for dinner. 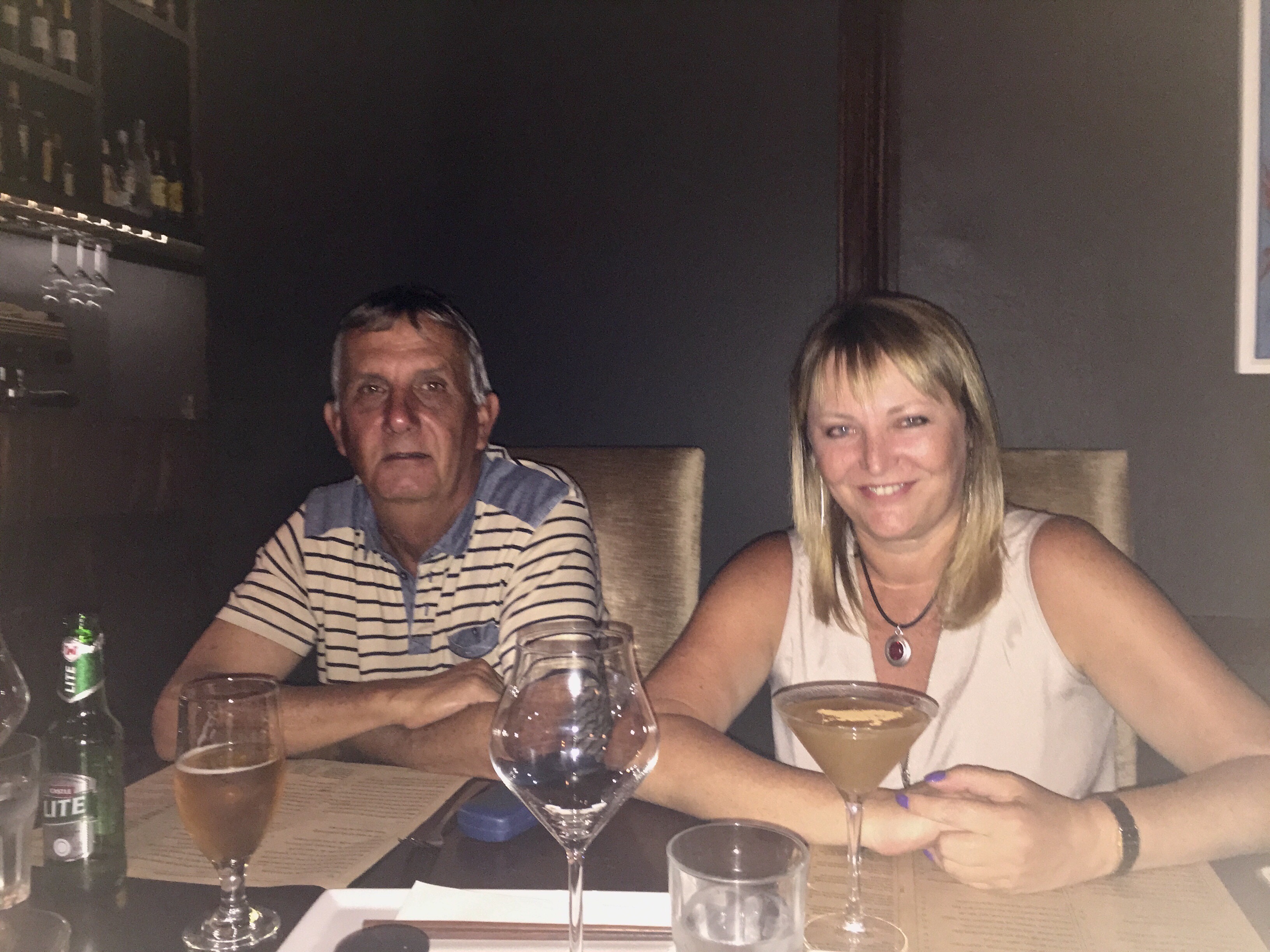 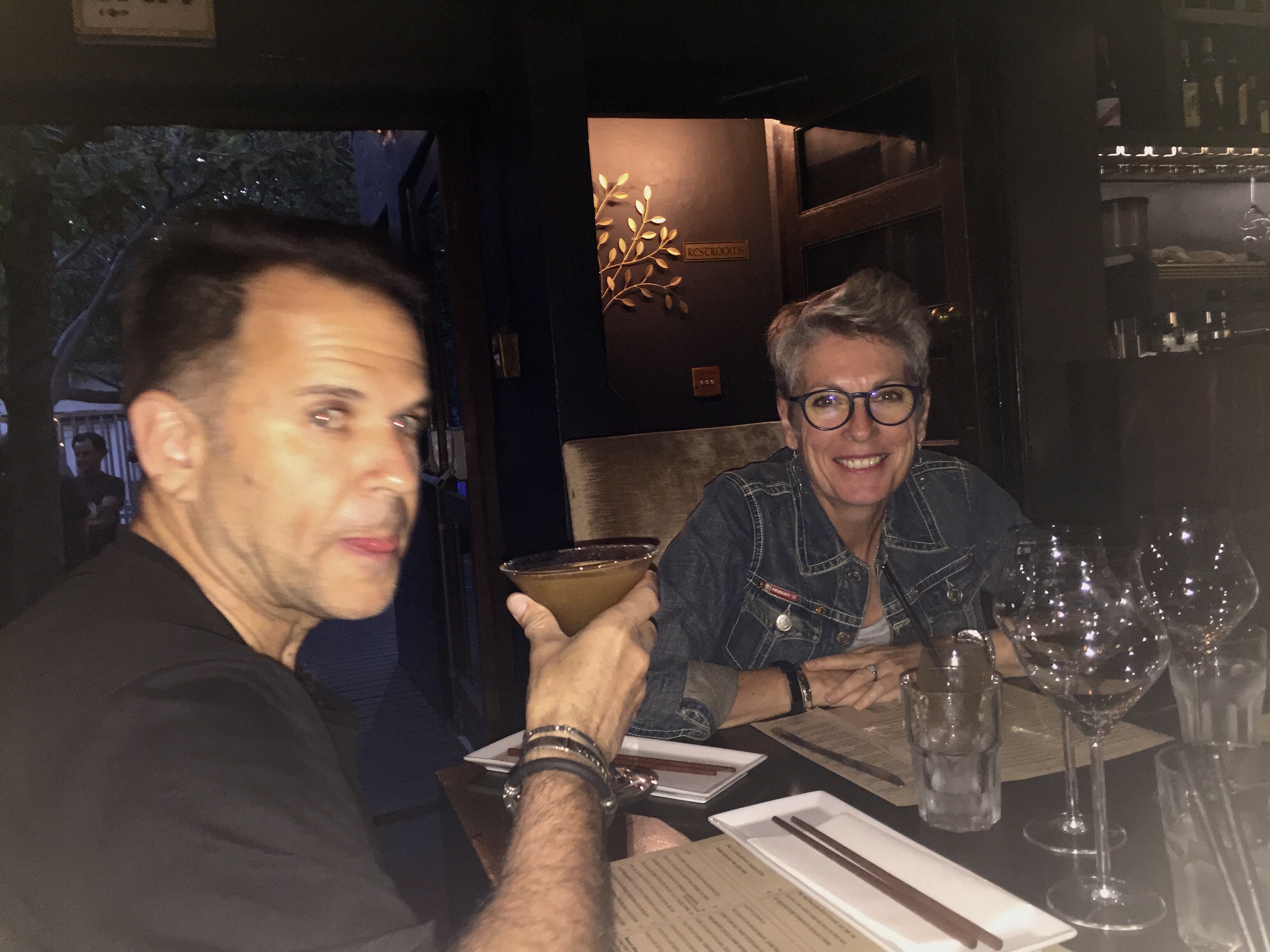 We were sat at a table by the open patio which was perfect on such a warm evening. The waitress came and we ordered a round of drinks. I ordered a Passionate Buddha. We had an incredibly long wait for our drinks, we eventually had to flag a passing staff member to enquire and then the drinks arrived quite quickly which leads me to think they may have been ready and waiting on the bar and our server was a bit overwhelmed. 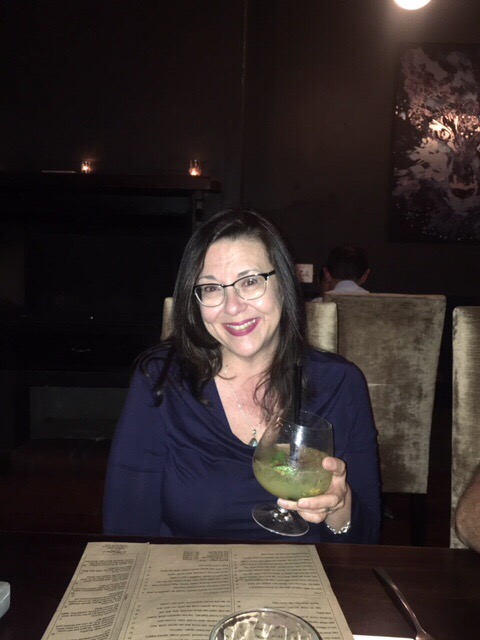 We had a lovely chat so we were not stressing too much, but we were starving so we asked to order.

They brought our Sea course first.

Norm ordered the Calamari. This is always delicious and this night was no exception. 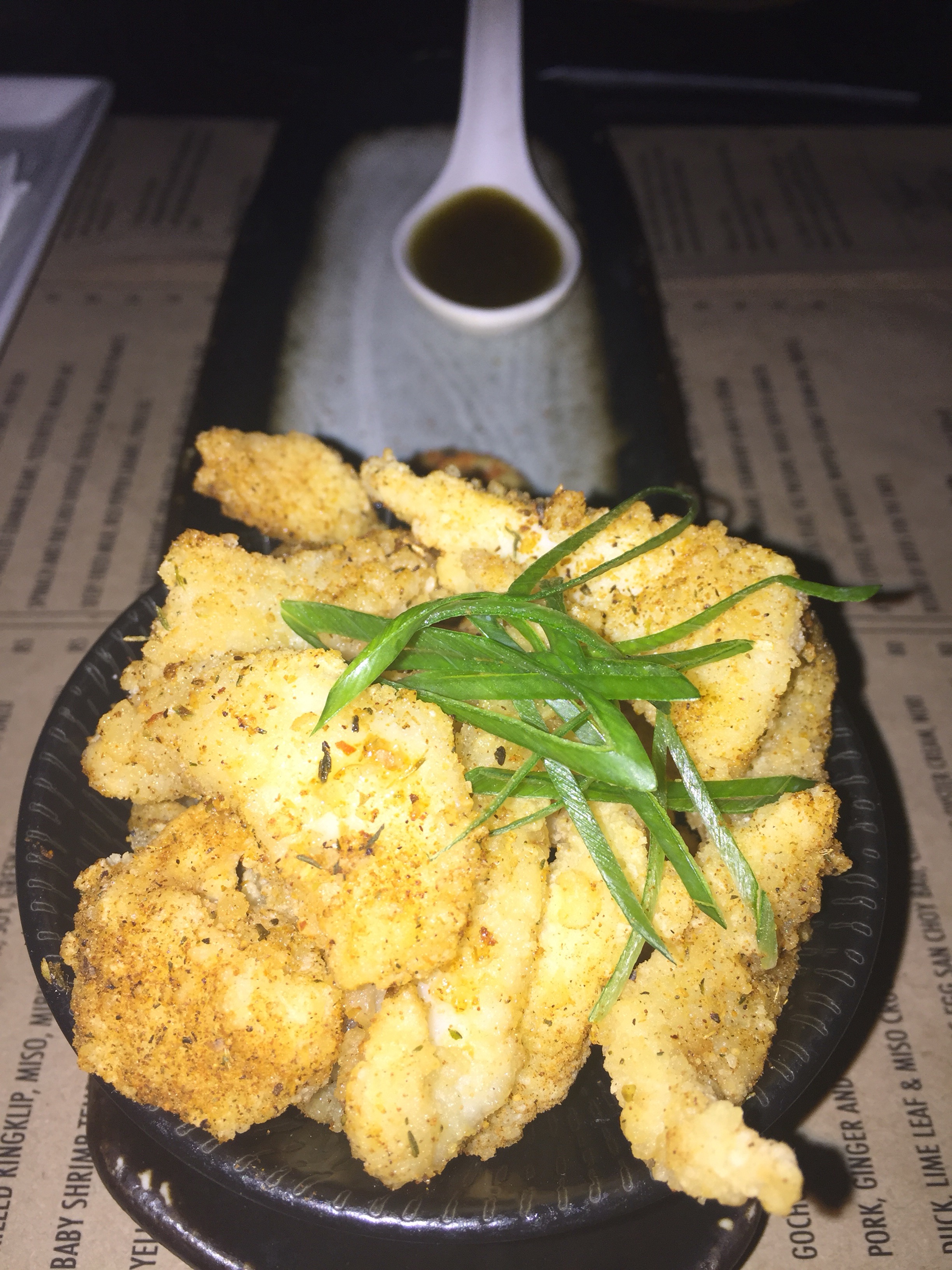 Everyone else received their first round of food but mine arrived after everyone else had finished eating.

I ordered the Crayfish Tempura which was an extra R25 but was worth every cent. 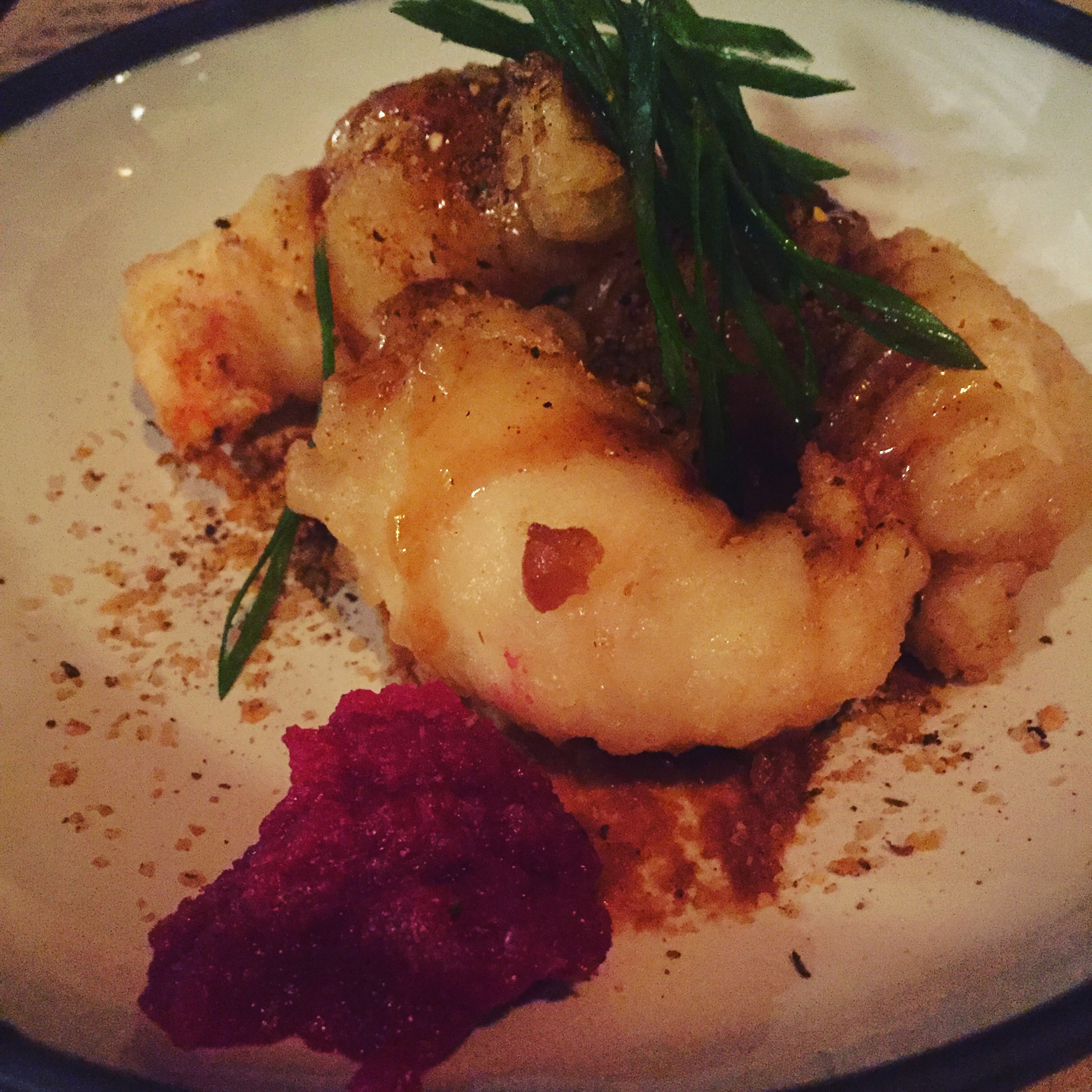 Usually you are served the Land and Earth choices together but the dishes were served haphazardly which meant people were eating at different times.

Retha and I both ordered the coconut and sweet potato dumplings which were as delicious as always. They were light and crisp. 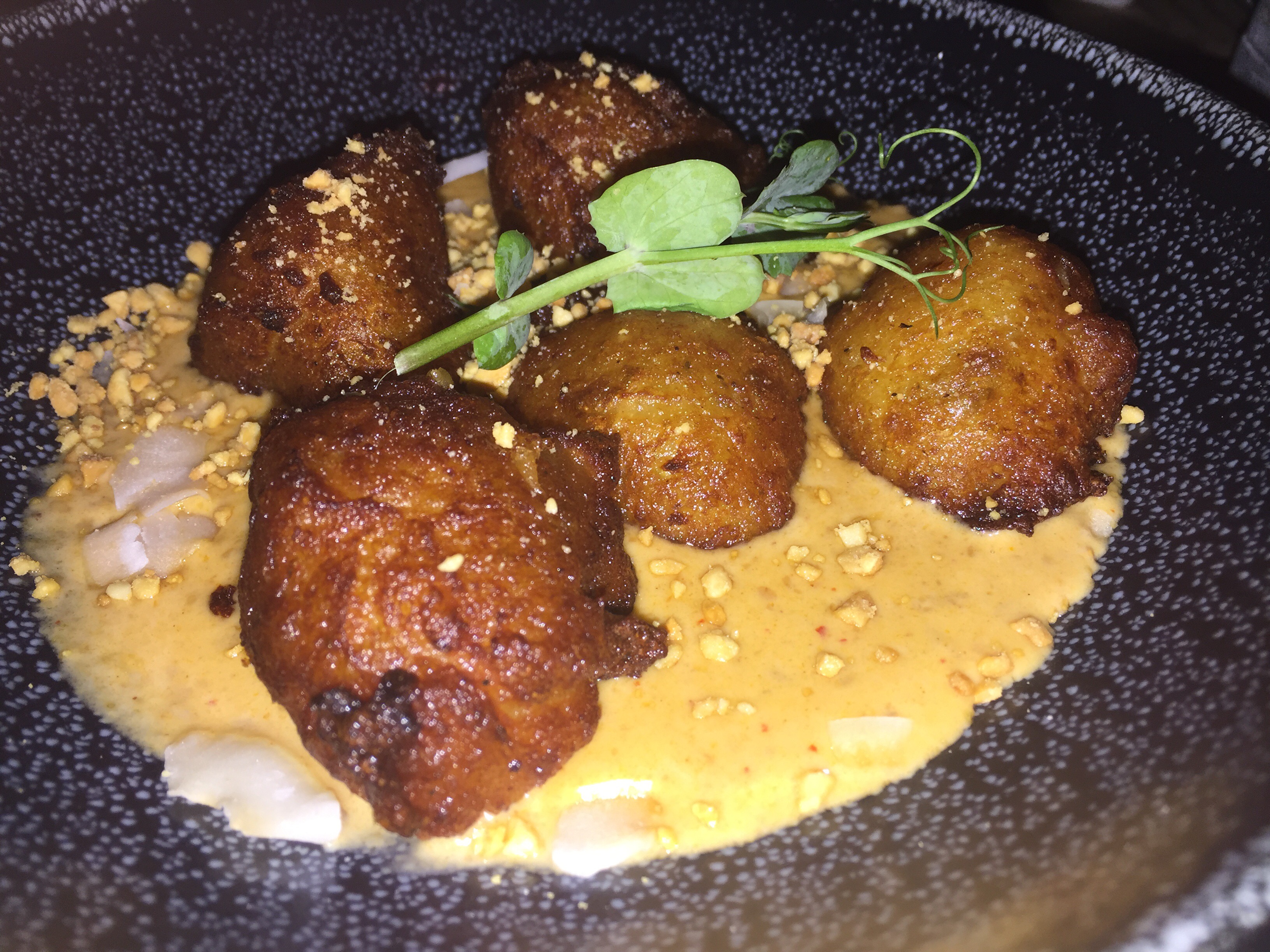 I had ordered the Mumbai Chili beef which was so yummy. The beef was cut into small pieces so it was crispy and not too chewy. I loved the chunks of coconut and little surprise bits of chopped green chili. 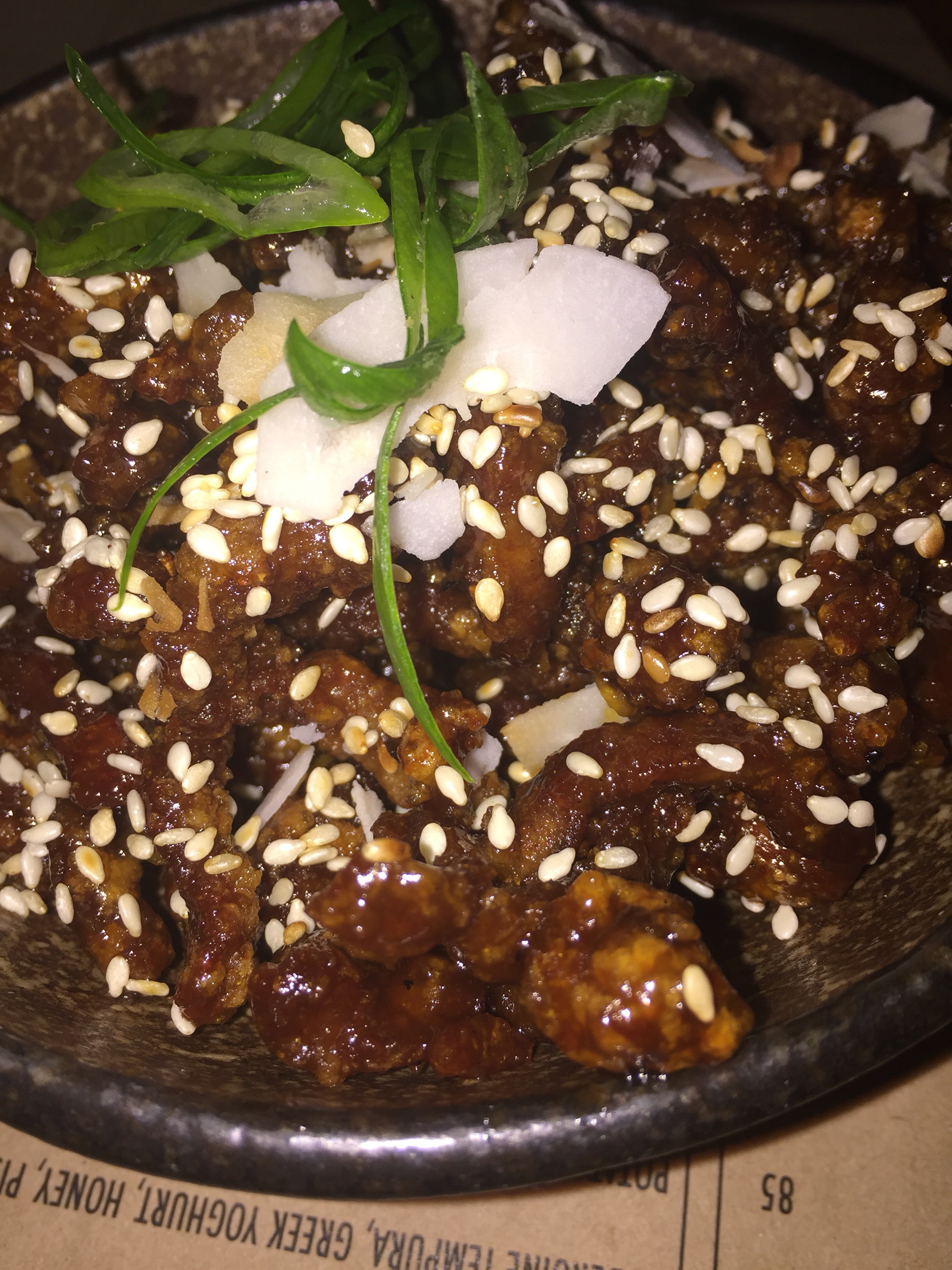 Norm and Barry had the crispy pork topped with a quails egg. Norm absolutely raved over this dish. It’s one of my faves but I decided to revert back to beef that night and really loved my chili beef. 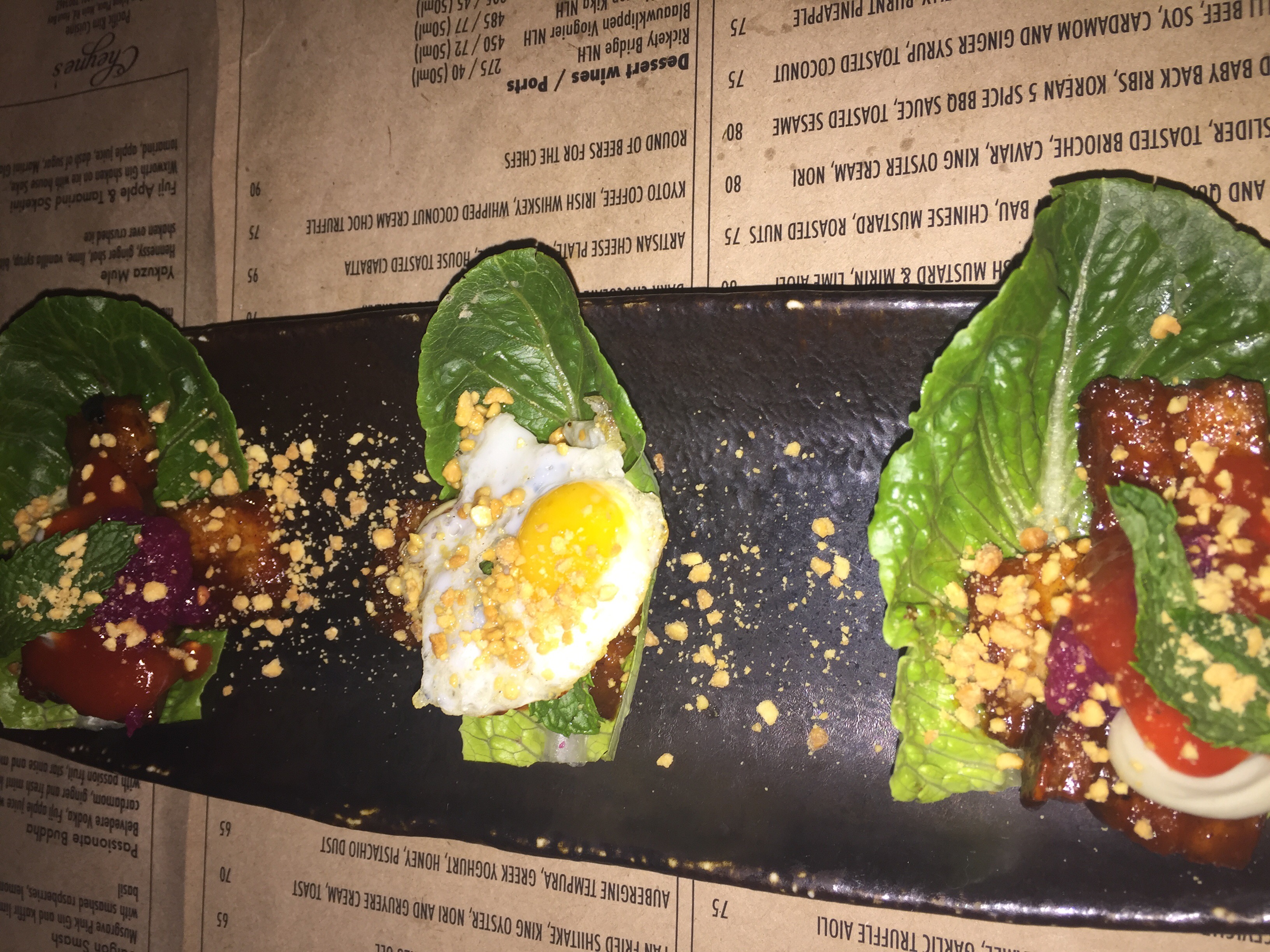 For my dessert I had my usual peanut butter milkshake. I gobbled it up so fast I didn’t snap a pic. Oops.

Norm had the apple pie with ice cream and loved it. 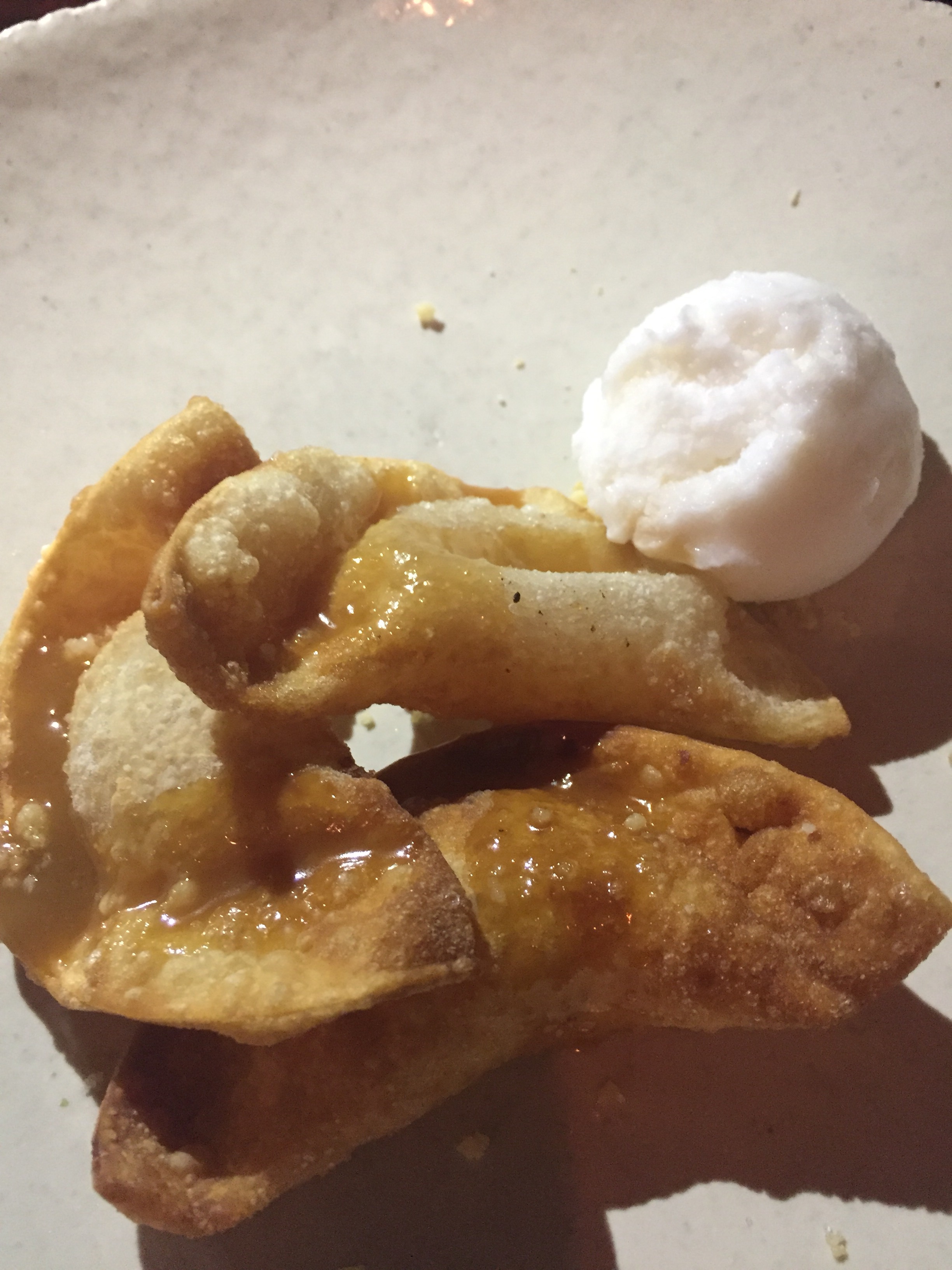 Cheyne is one of my favorite chefs but if that visit had been my first I would not have been very impressed. The service was rather hit or miss and the music was horrendous. Music should accompany your meal, not be an intruding assault on your ears. As a result Norm heard very little of the dinner conversation. At one point it sounded like there was 2 different songs playing at once. I’m not sure what was going on but it was all a bit off. Luckily we are all converted Cheyne fans already and just brushed it off and enjoyed the food.

After dinner we headed to Retha’s house for a coffee. We chatted and laughed and had a great end to a lovely meal before we all went home.

Saturday morning we got up and out as we needed to shop for the party we were attending later that day.

We went for breakfast at Allegria Cafe in Mainstream Mall in Hout Bay.

Norm had an omelette. 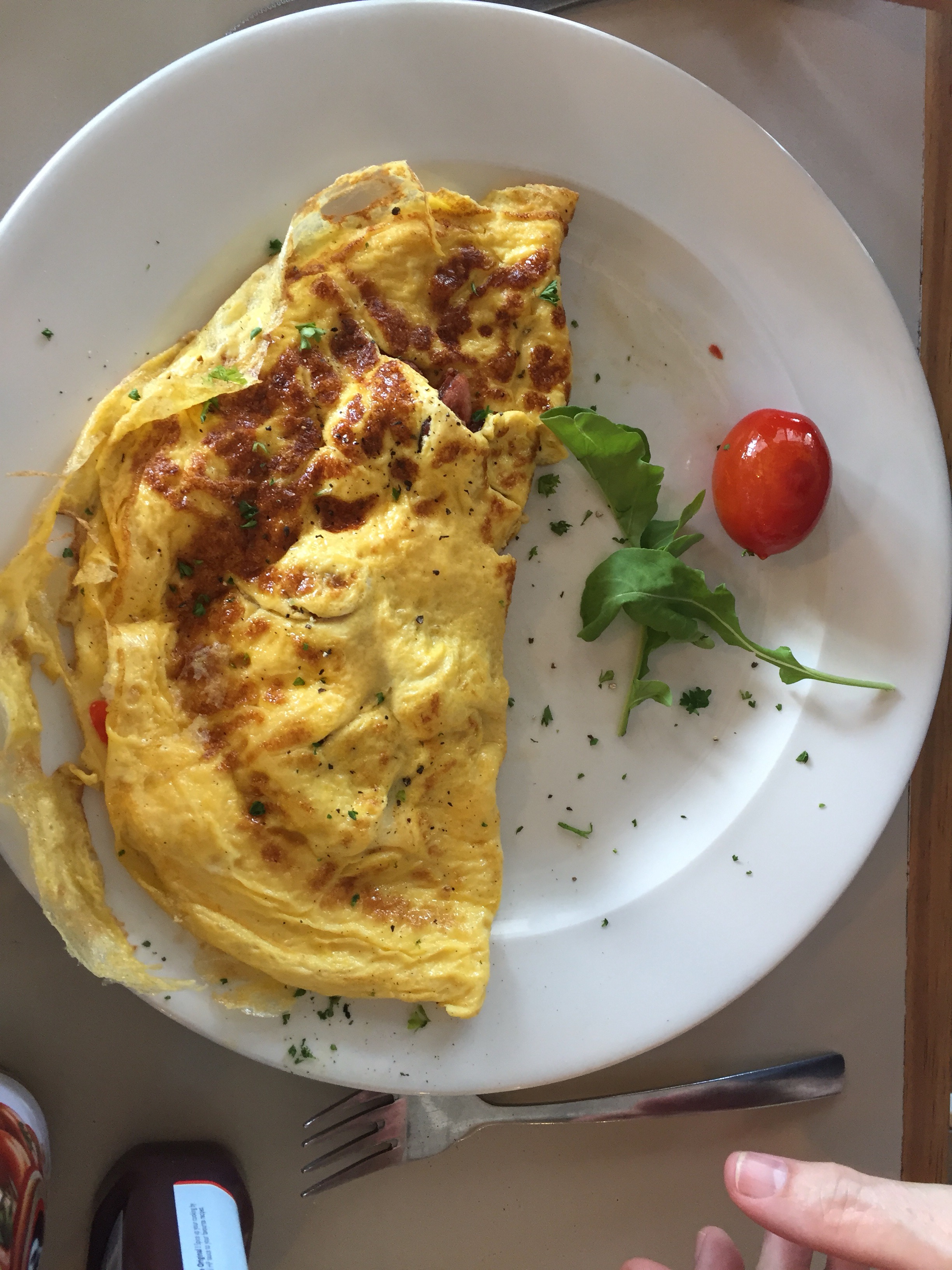 I had the Eggs Benedict with bacon. 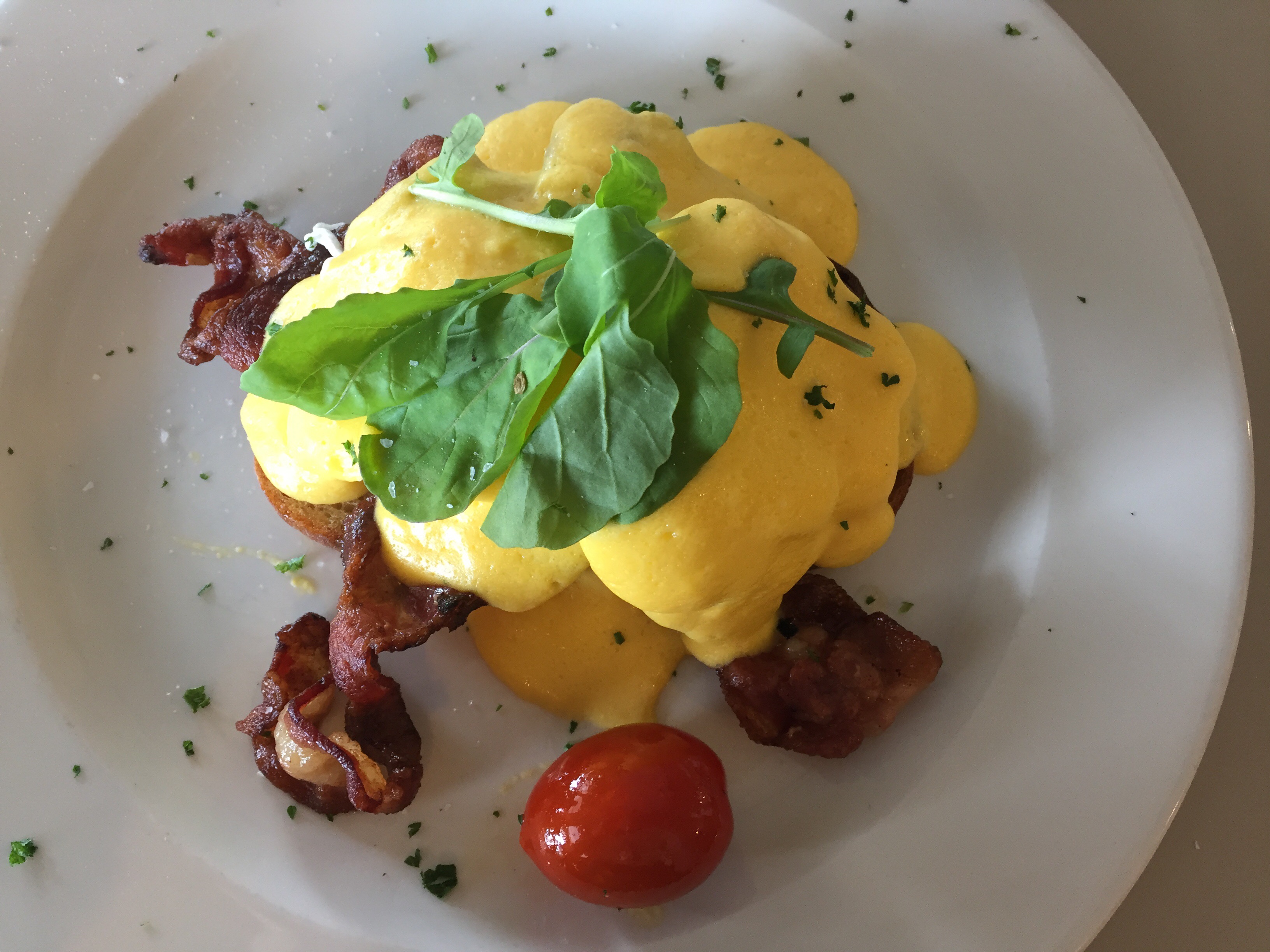 After we ate we popped into Woolies to get some bits to take to the party. We got carrots, celery and cucumber as well as dips.

Later that afternoon we drove out to Simon’s Town and arrived at Carol’s house. She has such an amazing view of the entire harbour. 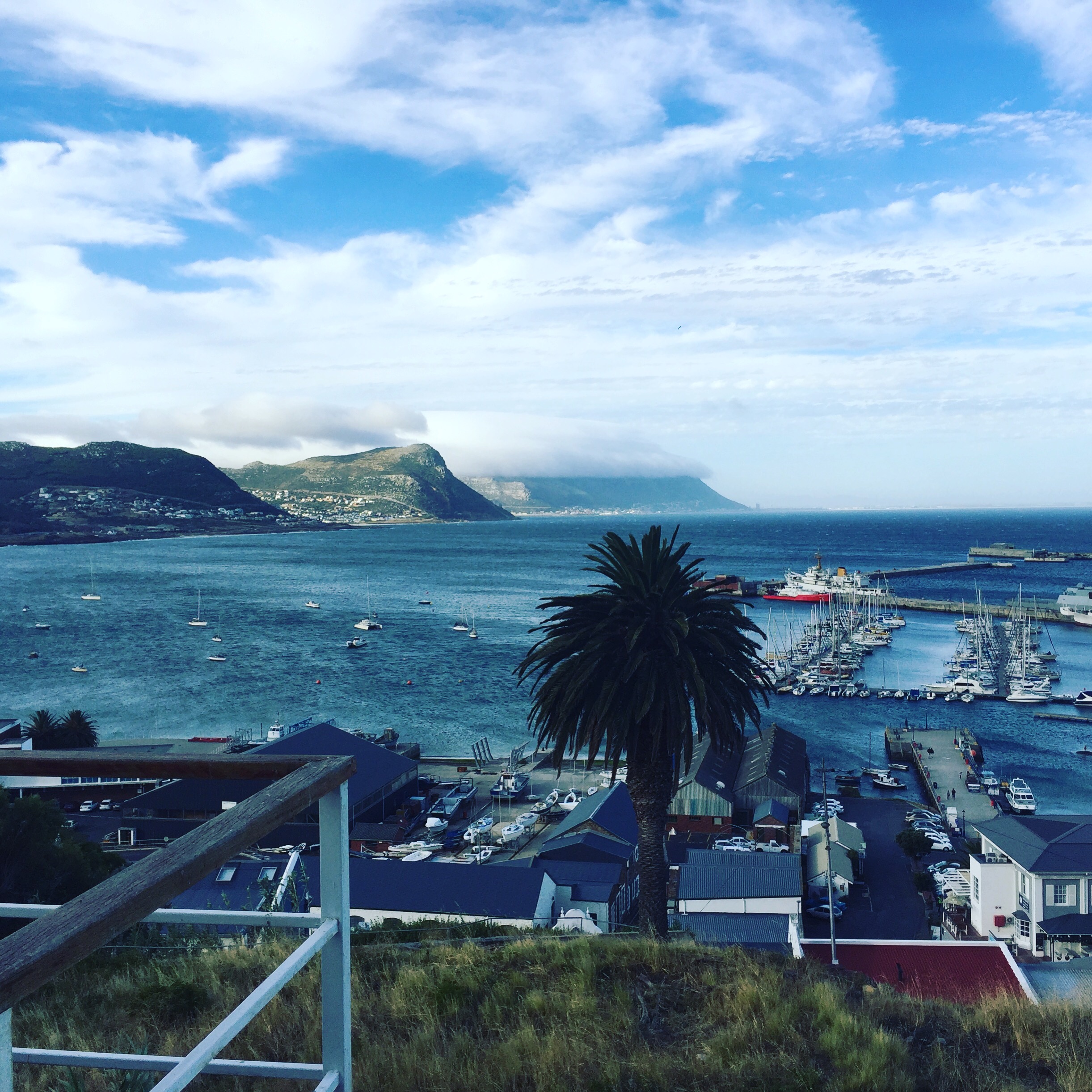 There were some people we knew as well as some we that we didn’t. 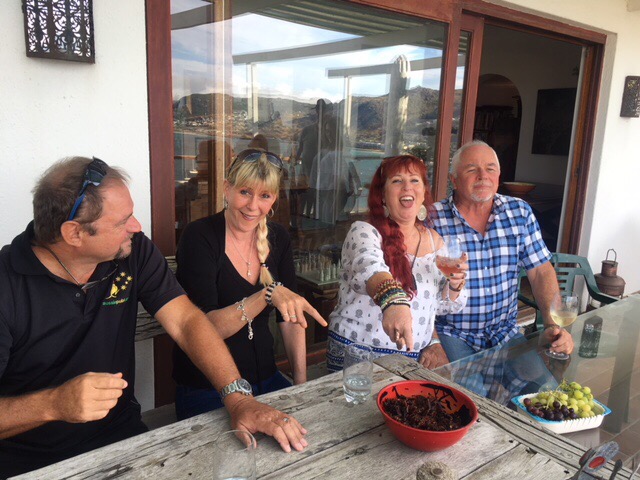 No idea why the bowl of biltong is so funny.

We sat enjoying the view and talking nonsense.

A post shared by Kitten In The City (@stresskitten)

Carol had bought sushi and Retha bought some roast chickens. Everyone brought a platter to share and we had lots of yummy food. 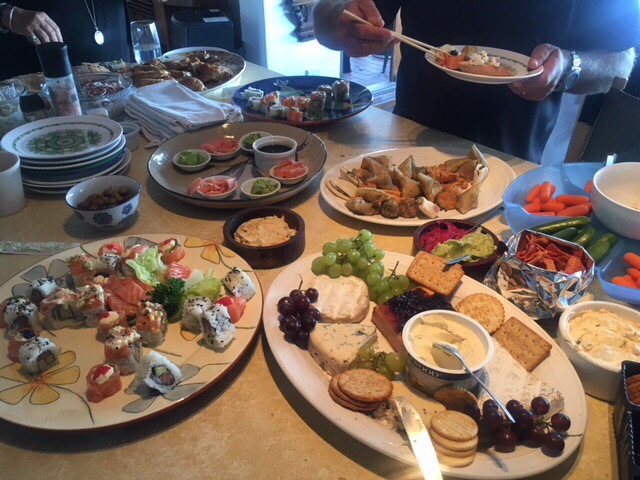 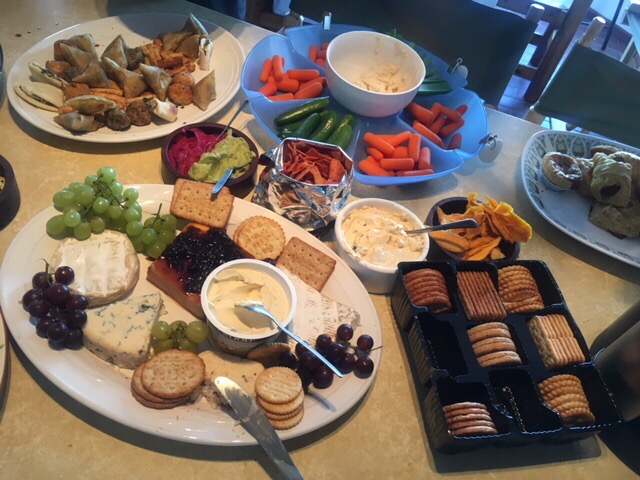 Norm and I tried to do a ‘selfy with a view’ but the sun was just setting so it was a challenge. 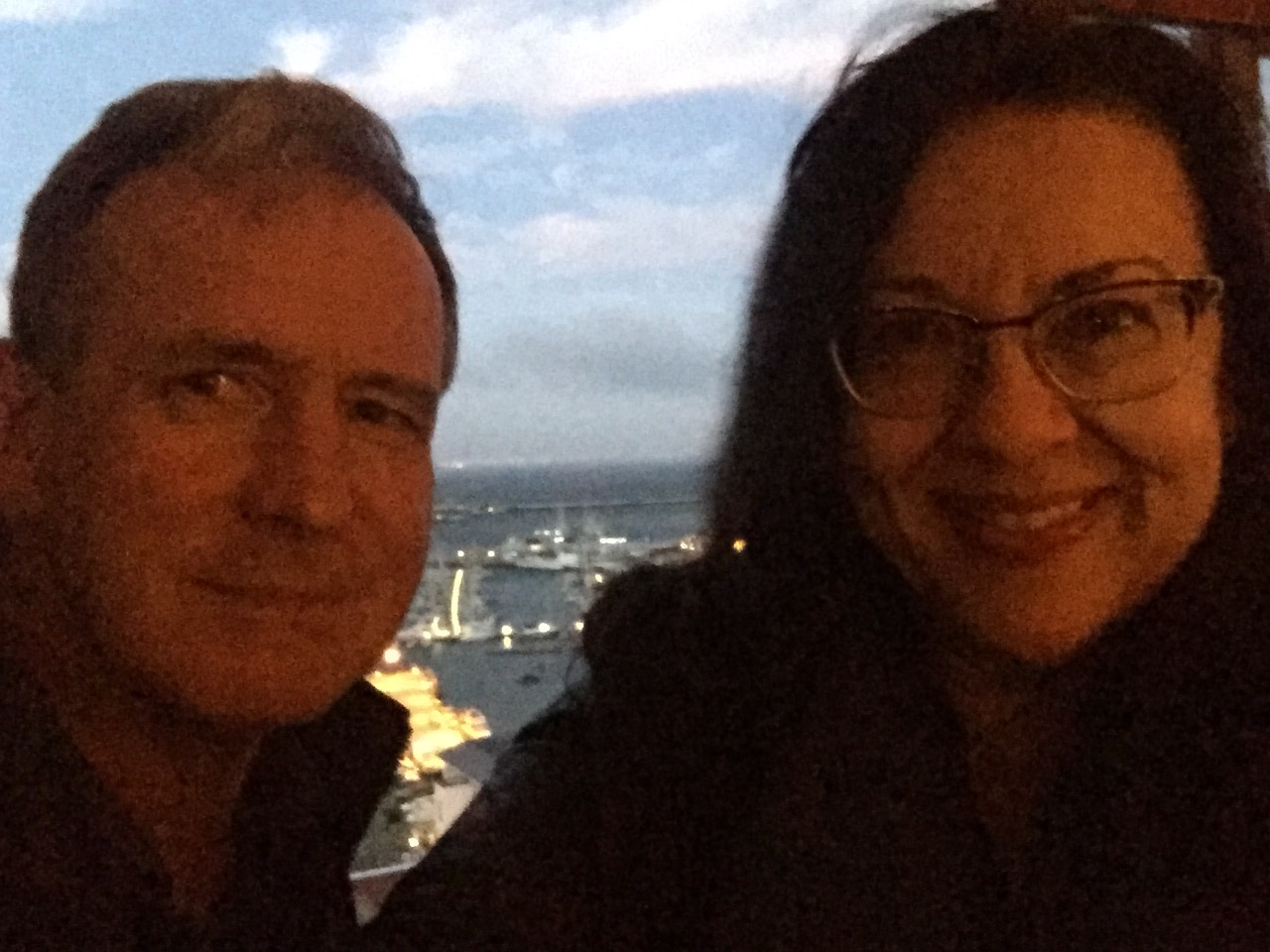 But the sky was a stunning shade of pink. 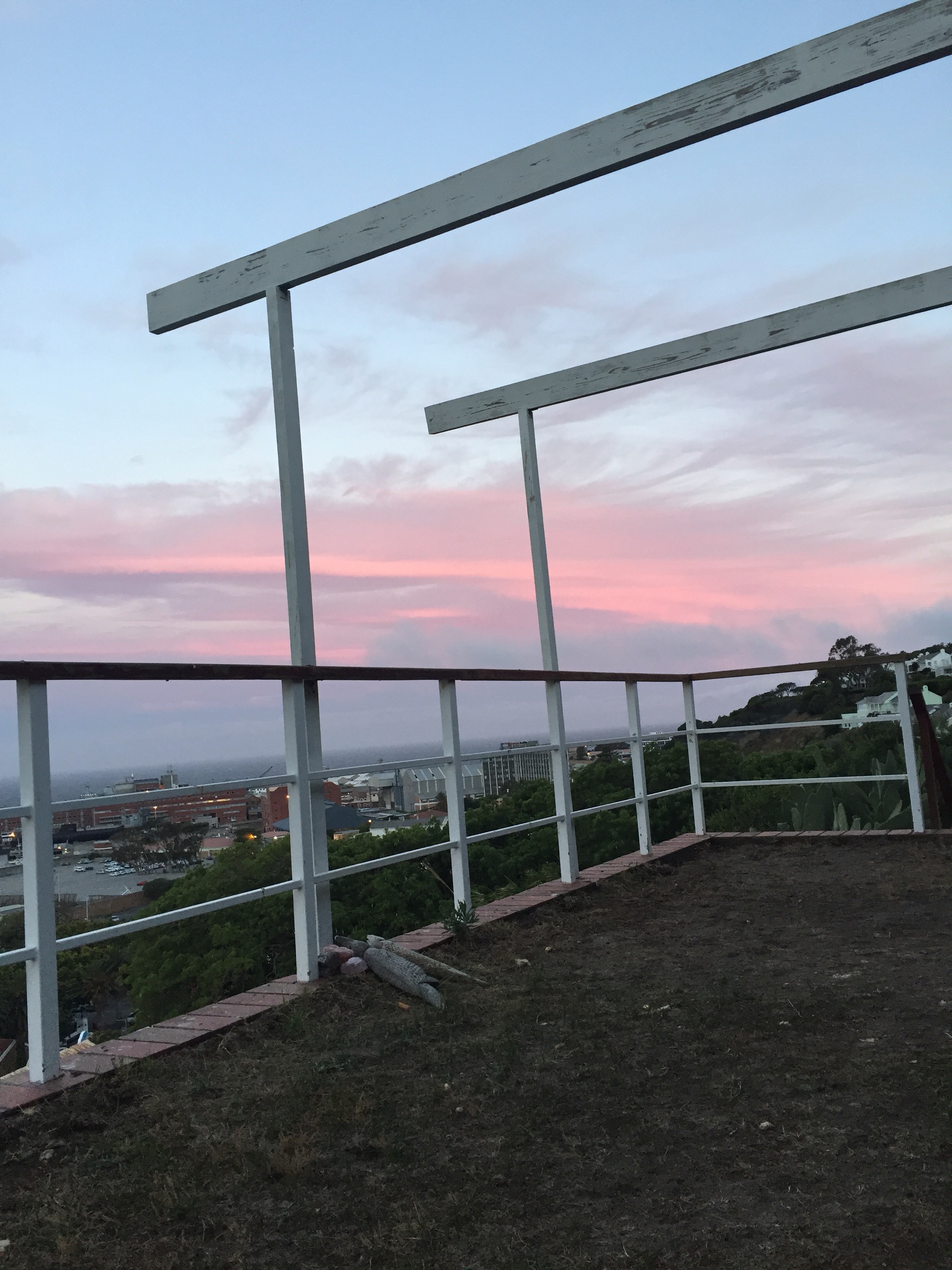 Norm and I began the long journey home around 10.30pm as I was off to drumming early the next morning.

Drumming began at 10am on Saturday in Constantia so I was up and organized early.

We were supposed to meet a Grandmother who is over from Europe but she fell ill and could not make it. Those of us who are regulars in the circle still stayed behind for tea and cheesecake and communion. It was lovely.

Afterwards I popped by Retha’s as she wanted to apply some feng shui in light of the new moon (pardon the pun) which was happening that night. We created a few items in her ‘money spot’ designed to bring abundance and prosperity into her life. We chatted about gratitude and the fine line between asking the universe that your needs be met and the greed of asking for wealth and abundance.

We decided to ask for enough abundance to bring peace. That seemed an acceptable compromise.

Lily and Josh arrived not too long after I came home from Retha’s. They were down to attend a wedding of one of Lily’s ex-colleagues.

We decided to order takeaway pizza because it’s easy and Norm popped into Papino’s as their Facebook page said they were open. Norm said it was very confusing as the staff seemed different and they said they were only doing takeaway no sit down service.

The pizza wasn’t the same either and we suspect that on Sunday they have a different pizza chef. It wasn’t up to their usual standards.

But even bad pizza is pretty acceptable.

We just had a relaxed night that night as all of my adventures had done me in.

On Monday my goal was to wrap all of my Christmas presents and Lily was kind enough to help me reach that goal. 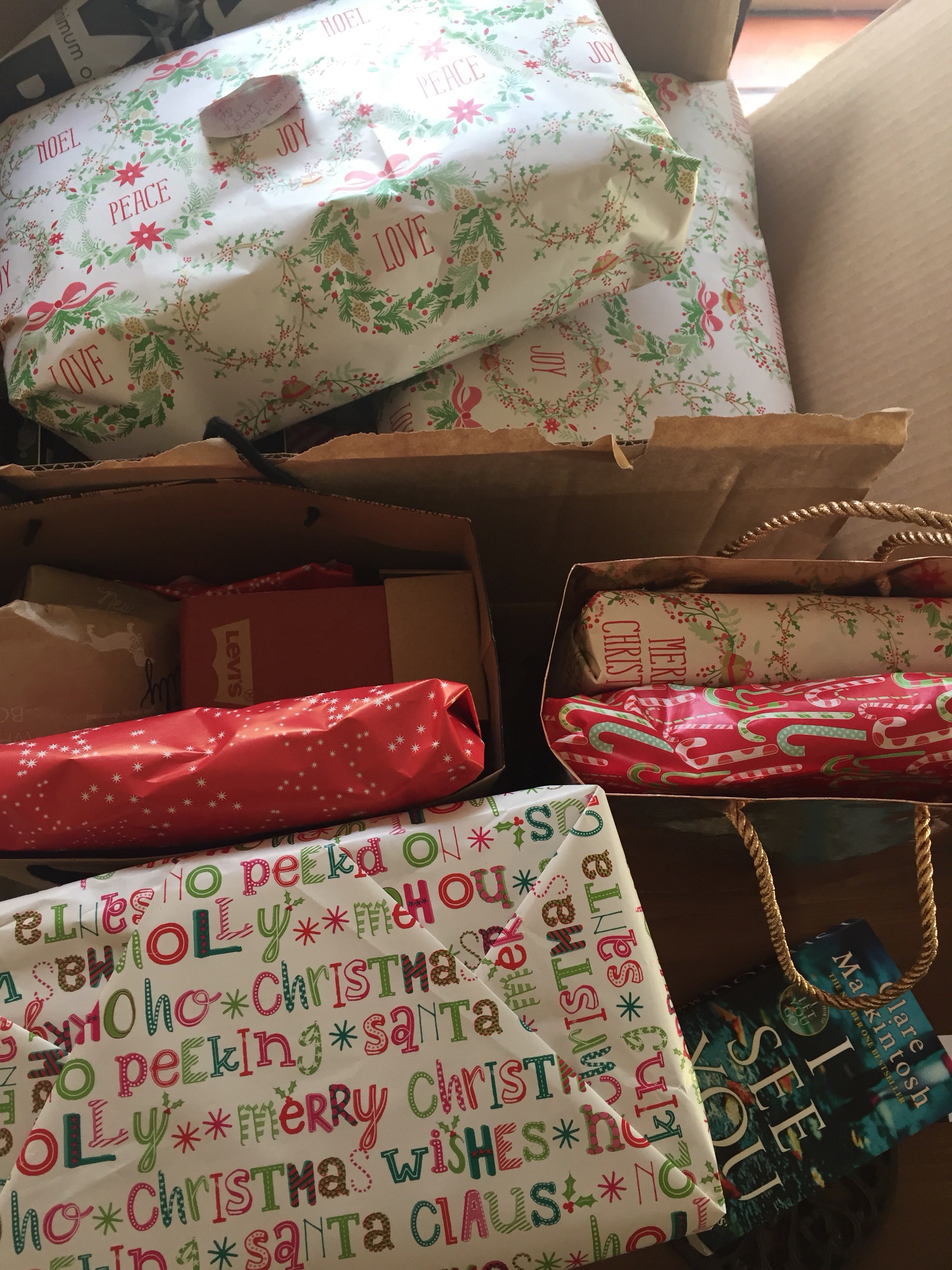 Lily and Josh were off to a wedding that afternoon and Norm drove them over so they can have a drink and a good party then Uber home. They looked so gorgeous.

A post shared by Kitten In The City (@stresskitten)

When Norm took the kids to Durbanville I had a pedicure so my toes are red, shiny and ready for Christmas.

Norm was on tenterhooks all day regarding the ANC elections. The results were finally announced on News24: “Cyril Ramaphosa has won the gruelling race to become the new ANC president after receiving 2440 votes against Nkosazana Dlamini-Zuma’s 2261 votes. His supporters celebrated with song and dance, and the Rand strengthened with 4% upon the announcement of the news. A tough road lies ahead for Ramaphosa, however, if he is to stick to his campaign promise and clean up corruption in the ANC. Mpumalanga premier David Mabuza was elected deputy president and Free State premier Ace Magashule secretary general. Both men are seen as allies of President Jacob Zuma and will have a strong voice in the governance of the party.”

I’m so thankful Zuma is going. He must still pay for his crimes, why should he be absolved?

As I feel that Trump should do prison time, so should Zuma. They both treat the presidency like their own piggy bank.

It’s been lovely having Lily and Josh here, it makes a nice energy. They have friends over here right now and I can hear their laughter in the garden.

That makes this Kitten happy.

I will have to create a new blog in the NY as I’ve exceeded my media limit for my free site. I can’t afford to pay to upgrade so I’ll have to start over or continue embedding my Instagram pics as I did above which is a pain. I can’t do that with another person’s photos. If anyone has any creative solutions please contact me.

Here is me wishing you all a very happy Christmas or Hanukkah or Yule or {insert vaguely named year end celebration} or whatever type of celebration you may be having, spiritual or not. I hope you spend it with someone you love or at least a person you enjoy the company of.

But most of all I wish you an abundant and prosperous 2018.

3 thoughts on “I Wish You Enough”