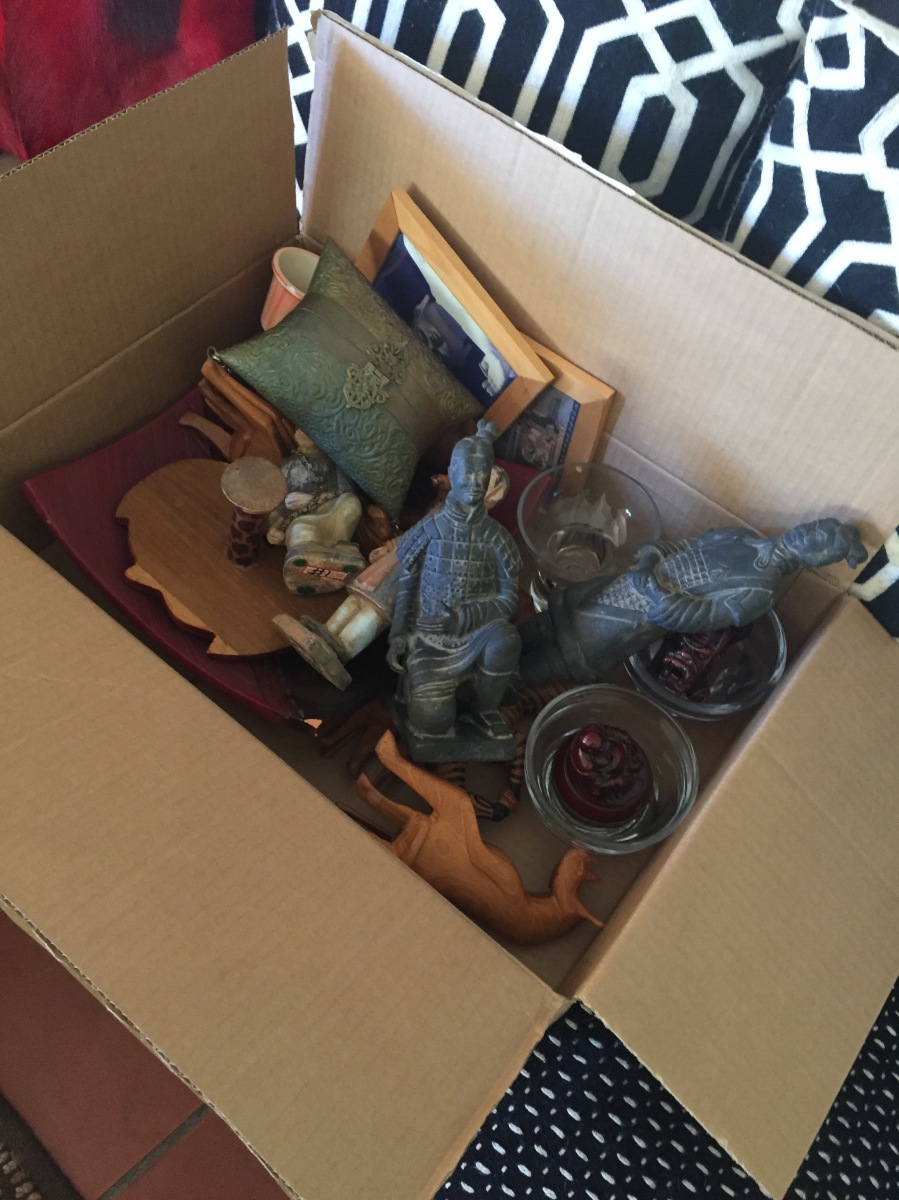 This past weekend was a lovely long 3 day weekend as Monday was Heritage Day in South Africa. It was made even better as Lily and Josh were down for the weekend. I cooked for us all on Thursday but on Friday night Lily was out with her childhood girlfriends for dinner but Josh had been working all day so he was happy to stay at home and chill with me and Norm. We ordered ribs and chicken burgers from The Kitchen Takeaway.

We started watching a new show called ‘Better Things‘ which I really enjoyed. I thought it was very funny. It stars Pamela Adlon who is very cute yet sexy and quirky and odd and she is perfectly cast for the part. 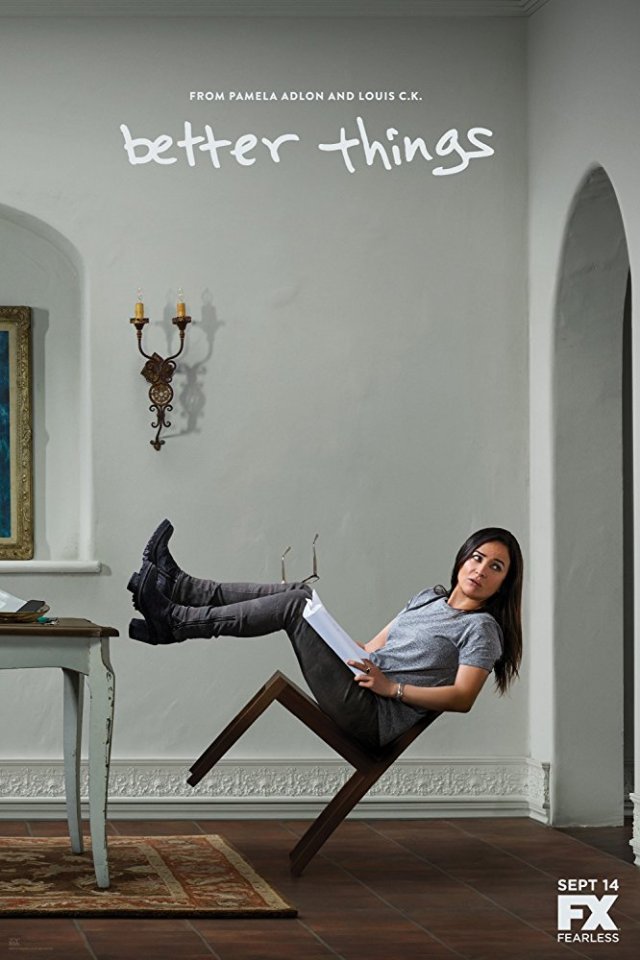 Of course she is one of the creators so that makes sense that she is perfect for the part. She collaborated with Louis C.K. who I am not always a fan of, I think he uses crudity in place of humour sometimes. But I am often edging onto the crude side myself sometimes, but then my prudish Virgoness pulls me back from the abyss.

We got up early on Saturday as I had an appointment at Skin in Hout Bay for a laser treatment. Norm and I popped in to La Cuccina for a quick breakfast before my appointment.

Norm then went off to do some errands in town and then he came back at 12:00 to pick me up.

Regular readers will know that we are downsizing and have taken the difficult decision to sell our beloved house and leave Hout Bay. After Norm collected me we drove over to Constantia to view a house which looked appealing on the brochure. We quite liked it but it does need a bit of work done to make it suitable for us, such as putting in a shower in the en-suite and removing some cupboards so my cooker could squeeze in to their kitchen layout.

After we had our viewing we went home and started on our plan to ‘house-doctor’ our home to make it more viewer friendly as the agent was coming to make the brochure photos on Tuesday. This is also called ‘Staging’ your home. Basically we removed all of the ‘personal’ items such as family photos and just did a general decluttering.

There were some items which I have kept for ages as they were gifts, or some which were mementos and had memories associated to them. Time to let that all go. 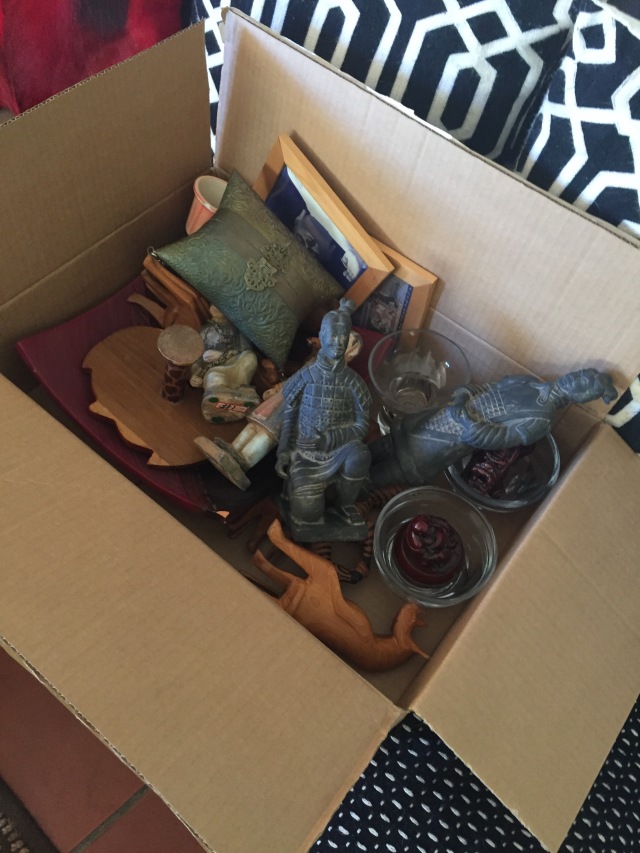 I had gone through a ‘Chinese’ themed decor phase a few years back where I had a bright red dining room and a lot of Chinese style artifacts and items, but this is no longer my style so out they went. I had other mementos of our past holidays such as a rusty little statue from Sardinia and a pottery plate from a trip to Portugal. The platter has a chip on it and I still have my memories, so out they went.

Lily had a look through the box and she took the Chinese artifacts and some of the other items. The rest will go to DARG to be added to their fundraising garage sales. I have another big bag of jewelry which will go as well once Caitlin has made sure there is nothing she wants out of it.

We packed up CD racks and gave away a CD player to a friend as we have several CD players and never play any of them. Norm took some winter jackets down to the homeless men who do car guarding in Hout Bay as they are outside in all elements and it is still cold at night. They were very happy that he thought of them. He is a good kind hearted man. I hope that it helps to balance out my own nasty selfish side. A couples group karmic score sort of thing.

The house is so empty it almost echos. But it looks so spacious.

That evening as we were on our own we decided to pop down to Woodcutters Arms for a wee bevvie and a pub dinner. 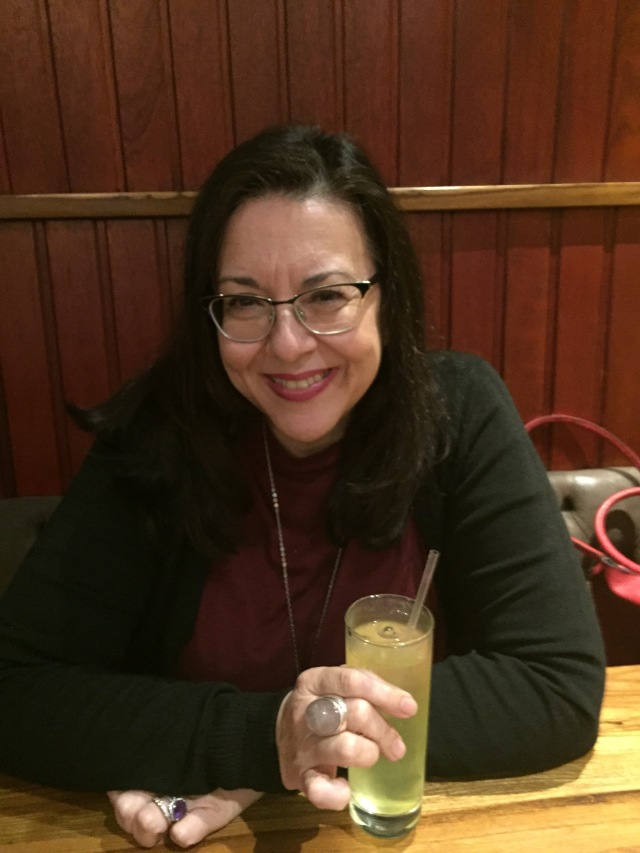 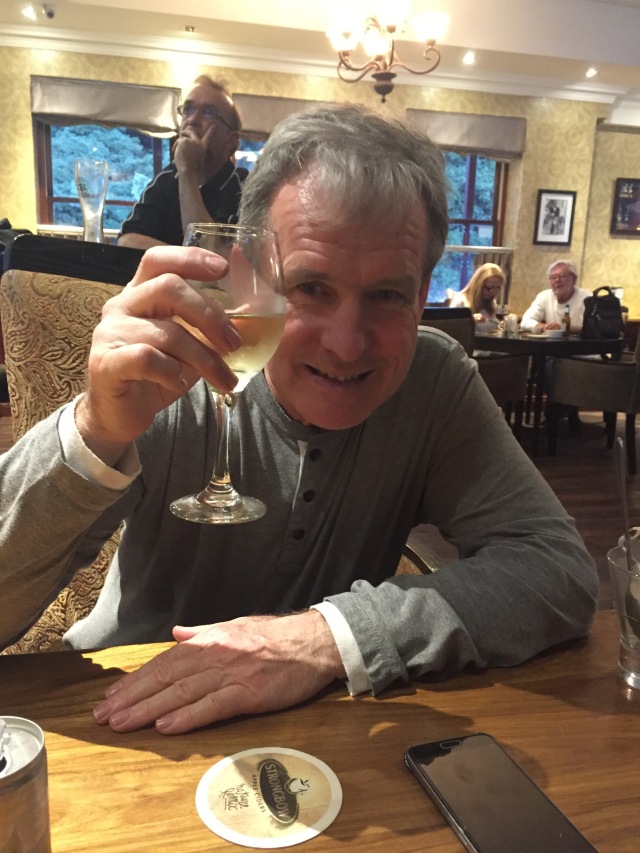 We are never very adventurous and we both had our usual starters, the jalapeno cheddar cigars for me and the scotch egg for Norm. 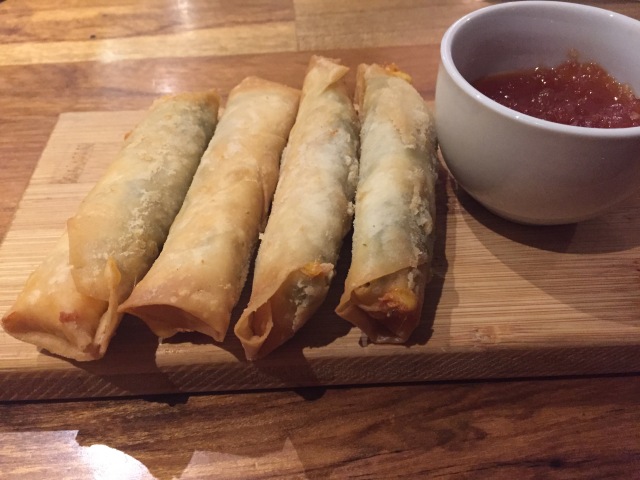 He does love these scotch eggs. 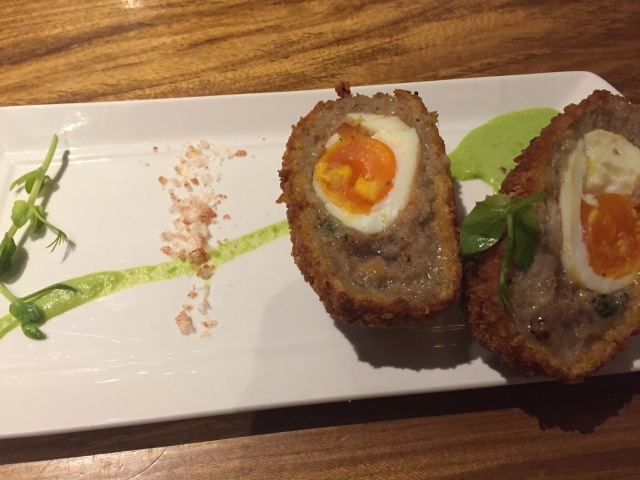 Norm was somewhat virtuous and had the Blue Cheese Burger on special and he had it with salad and did not eat his bun. 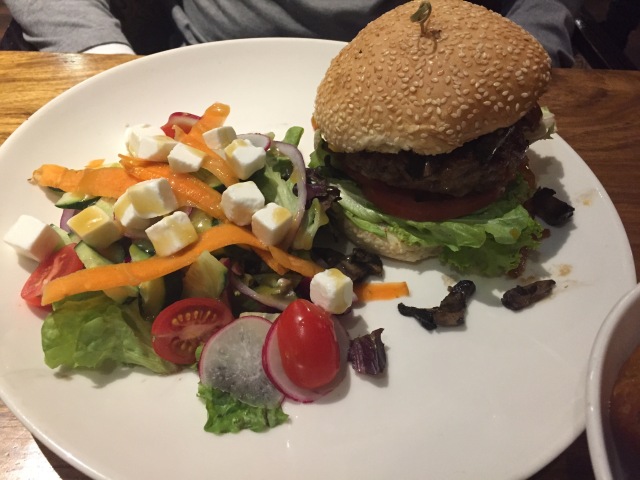 I was very naughty and had chips with my chicken burger but I also did not eat my bun. 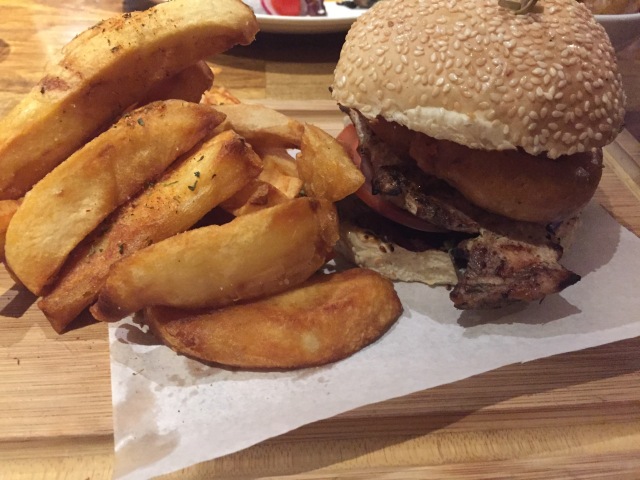 I had an order of onion rings to make up for not eating the bun however. 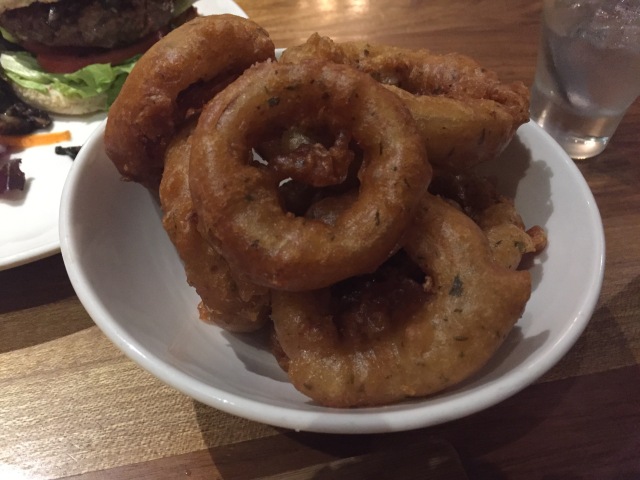 After our dinner we headed home and decided to watch a film. I randomly chose ‘Nocturnal Animals‘. I do love Jake Gyllenhaal. 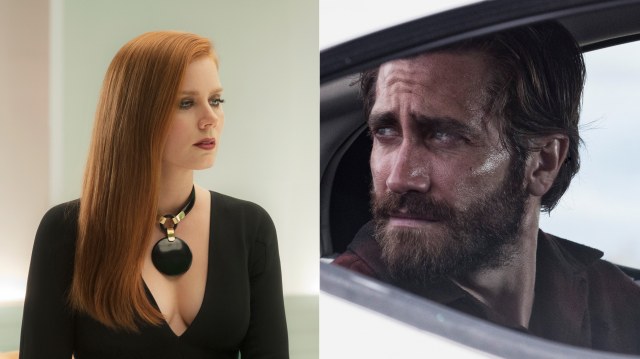 That was one weird hard to follow film. I could never tell what was reality and what was part of the screenplay the lead actress was reading. I won’t even go into whether the lead was played by Amy Adams or the other one. 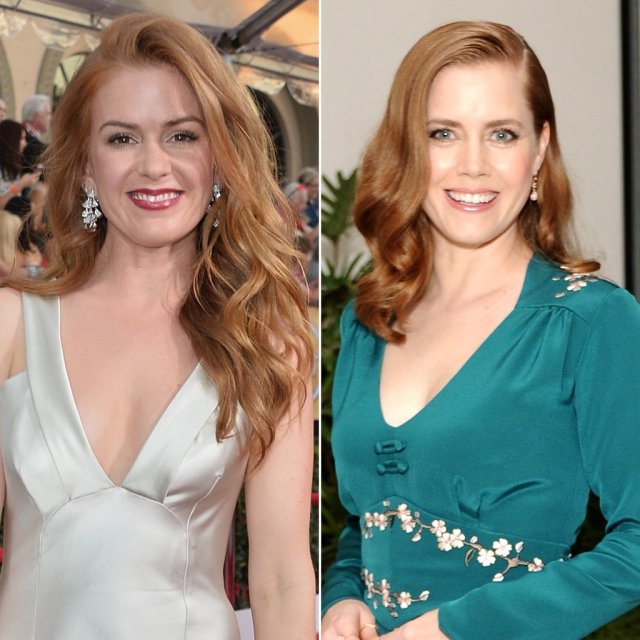 We had more house viewings on for the next day but first we got up and carried on getting the house in a state for the brochure photos. Norm pottered about endlessly fixing and tidying. He is a demon when he sets his mind to a task.

Lily and Josh headed off to their hen party and bachelors parties.

Norm and I headed out late afternoon and viewed 2 houses both in Constantia, just around the corner from the one we viewed on Saturday. The 1st property we saw on Sunday was perfect for us. It was in a quiet cul-de-sac and the only thing we need to do is add a shower in the master en-suite. A lot of the older houses do not have an en-suite at all and when they do it often does not have a shower. With our current drought one cannot even contemplate filling a bath to luxuriate in.

The 2 properties were just a few minutes away from Cait’s new flat and she had just returned from her weekend away with Wes and his friends so we popped by to see her. She has made a lot of progress with unpacking.

After we left Caitlin’s house we were starving so we popped in to Peddlars for an early dinner. Once again they have completely changed their menu. They have now opened up what was 3 different restaurants on the same site which previously had 3 different menus to be one open room and only 1 single menu. However it now seems to have lost it’s identity, decor wise. There are completely different styles in the 3 seating areas and it seems a bit of a design fail.

But I wasn’t there to enjoy the decor I wanted fed.

Norm settled in with a glass of sauvignon blanc. 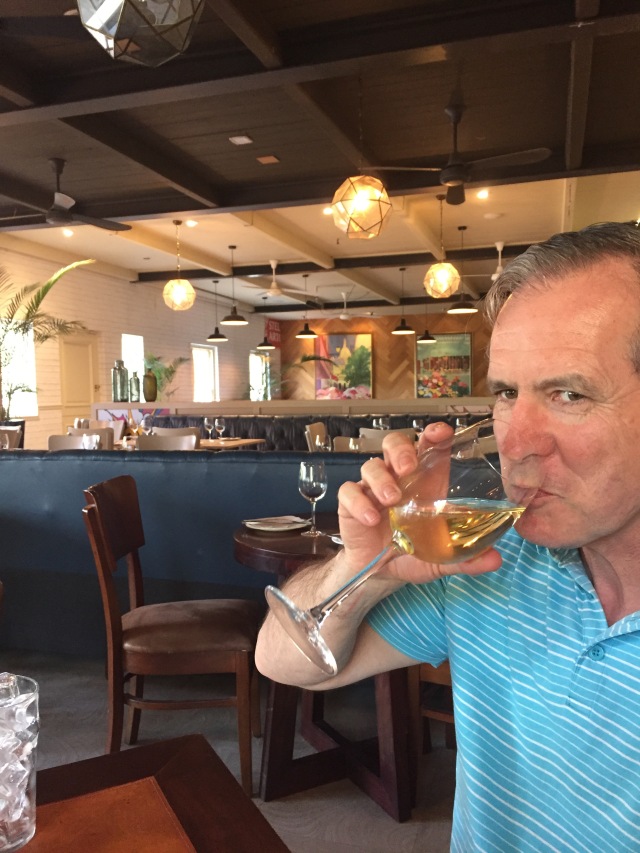 I ordered the Panko Crumbed Chicken Breast for R98 which was described as Parmesan and herb crusted with chips. I chose to add cheese sauce for an extra R20 and was glad I did as it was a bit dry without it.

Norm had the Beer Battered Hake and Chips for R115 and he enjoyed it. 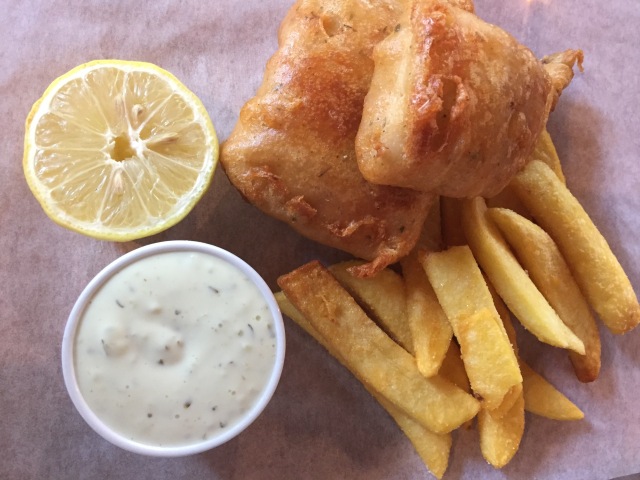 We decided to push the boat out and have a dessert to finish off our day of debauchery.

We decided to order 2 and to share so we had a Chocolate Brownie at R48 which came with vanilla ice cream and caramel sauce as well as the Chocolate Nemesis at R65, described as a flourless chocolate cake, mascarpone and berries. 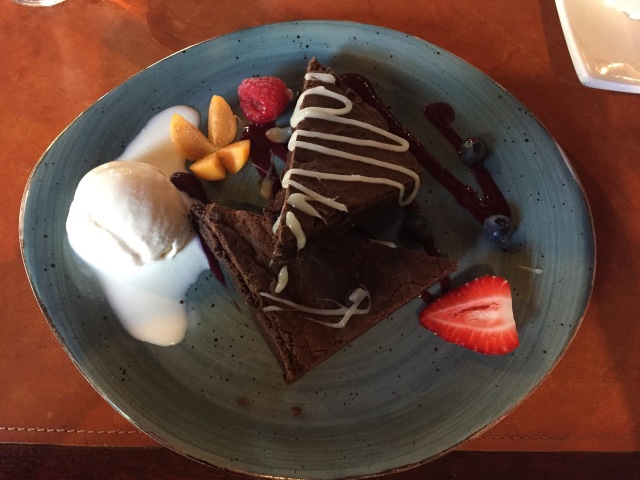 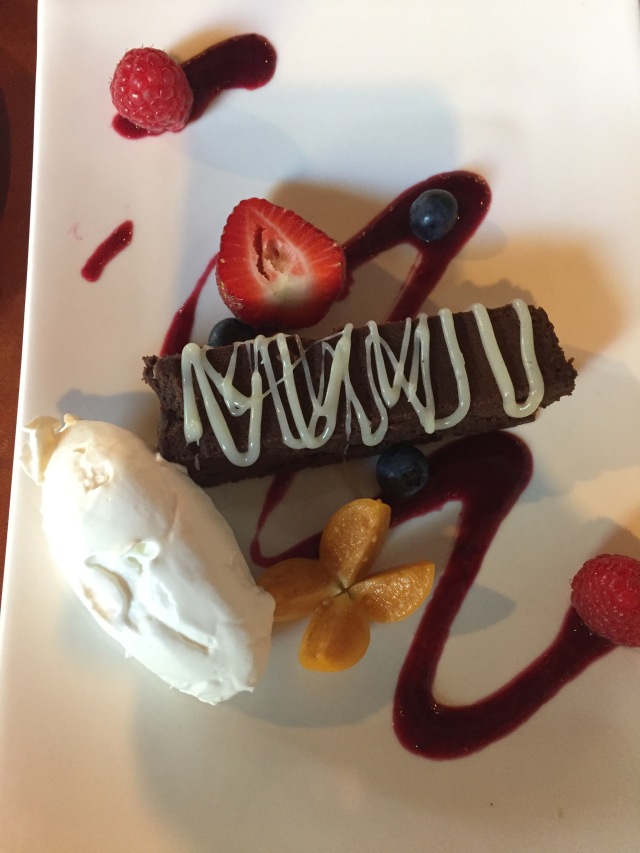 We headed home and Lily arrived soon after we got in. Josh was still of partying with his pals until later that evening when Lily went to fetch him feeling a bit worse for wear. The girls had a pamper party but the fellas had played footy on the roof of a building and he ended up with raw knees and a bruised rib.

His blood pressure has been very low so I was worried about him playing sport, but I am a bit of a paranoid mommy sort. He was fine, just a bit banged up.

We had a chilled out evening as we were rather knackered from the House Doctoring and tidying.

On Monday morning Lily and Josh were up early and off back to the Garden Route as they both had work the following day. Norm and I carried on pottering about.

I made us an omelette out of the bits and pieces in the fridge. I fried peppers, onions, mushrooms and chorizo and then made it into an omelette. I served it with avocado and tomatoes.

I reheated my left over onion rings and had those with my omelette. 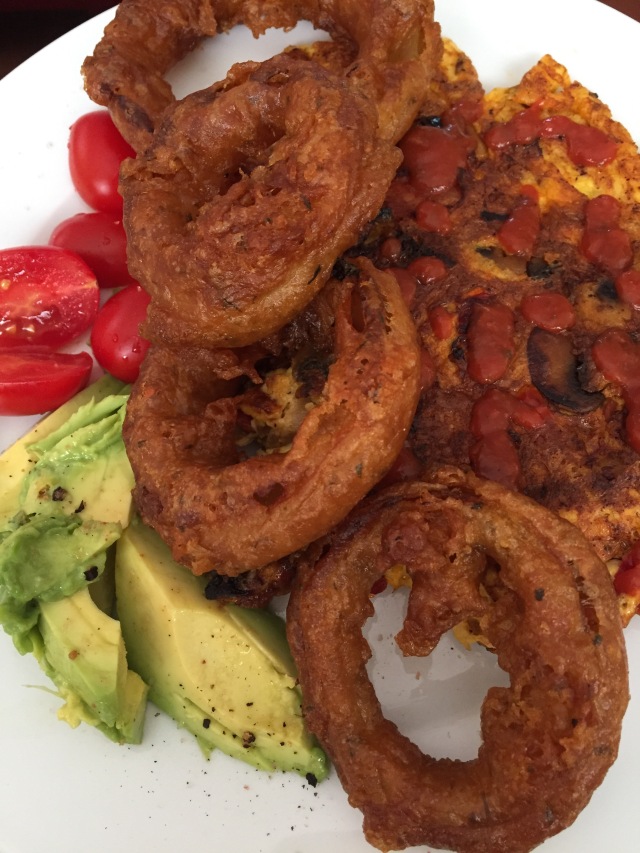 After I ate I went out and started on tidying the garden. I worked at trimming all of the bushes around the pool as that is what you see when you are on our patio looking out and it was full of dead bits from the last time it bloomed. We do have a gardener but he seems to be busy doing other things….not sure what.

We set up our back garden patio area which was still in winter mode. We put the couches out and put on all of the cushions, we rearranged the tables and chairs and did a general tidy up.

We were so exhausted after it all but it feels great to get rid of clutter. Our house looks fab. Hopefully it will sell quickly and we will find the perfect house to move to which is smaller and without the stairs which are giving my arthritic knees such issues.

We were back at work on Tuesday and today I facilitated a client workshop delivering our first work item. It went really well and they are happy with my progress.

A Cosatu strike occurred today. The strike is in protest against corruption and state capture. 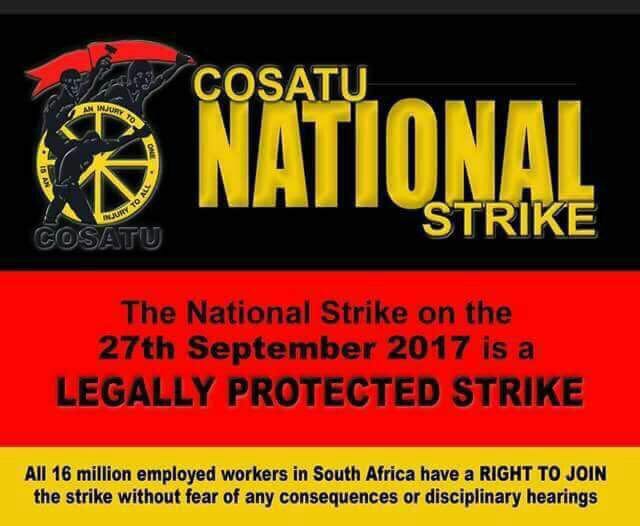 Cosatu national spokesperson Sizwe Pamla said the country was struggling with a 38% unemployment rate and about 10 million people who were without jobs, while more than 17 million were on social welfare.

“This is happening while South Africa is losing roughly R147 billion a year from the money illegally taken out of the country,” he said.

There is such corruption across all political parties and branches of our government. It saddens me as South Africa is such a wonderful place, if only it was not being pilfered by our government. It is over 20 years since apartheid ended yet nothing has changed for the vast majority of the people here. Crime is prevalent, unemployment is rife and millions still live in shacks.

The ruling government should be ashamed of this continued oppression.

I hope you all enjoy the rest of your week. I am looking forward to my Introduction to Shamanism course on Sunday. We are taking a break from viewing properties until we gauge how our house performs on the market.

Kisses from the Kitten. xoxoxoxox