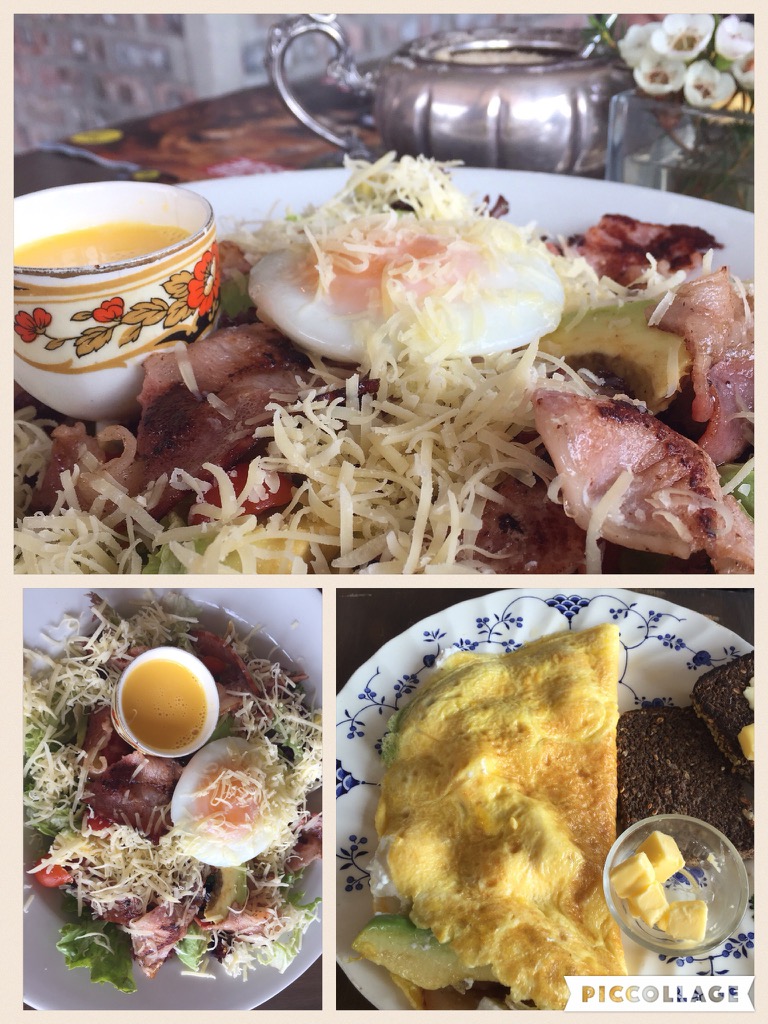 It’s funny how my reaction to almost the exact same situation can change depending on one factor. For example, I woke at 6.45 Sunday morning. The sun was just peeking around the curtains, Norm rolled over and took my hand and Panda crept up from my feet to nestle in the crook of my body, giving my arm a little lick. I felt cosy and content with my lot in life.

This was probably because we went to bed before 11pm so we had gotten a full nights sleep, a goal which I seldom seem to achieve.

I average about 5-6 hours of sleep a night and this week I just felt like I’m not coping with the demands and obligations of my daily life. I had a mini meltdown and we vowed to try and go to bed earlier. Regardless of when we went to bed I still had insomnia, lying and staring at the ceiling or tickling Panda’s tummy until I even annoyed him and he shuffled off to the foot of the bed to sleep. I went to work Friday on 4 hours sleep. Friday night Norm went to bed at 11 but I was wide awake. Exhausted, yet wide awake.

I watched a horrific show about Banaz Mahmod who was a beautiful young Kurdish Muslim girl who was a victim of an honour killing by her family. Banaz had been forced into an arranged marriage to a violent man, she left him and developed a relationship with a young man and her family felt that this brought shame on the family. Interesting that the man they chose as her husband who beat and raped her wasn’t considered shameful, but the kind young man she chose did. A very skewed perspective. The incidence of honour killings in the UK is most likely completely under-estimated, but the number of victims is still very high. As the family are the ones who commit the murders, and it’s generally the family who reports a child missing, who would report a missing victim of an honour killing?

The news and social media have been filled with the story of the French ban on Burkinis on 15 of the French Riviera beaches.  We watched in disgust as photos emerged of the police forcing women to remove their clothing in public. 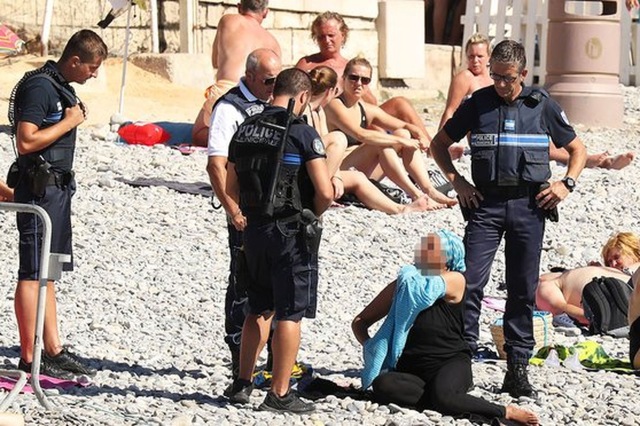 Why do men always feel that they have the right to tell women what to wear? Or what to do or say? It seems if a woman shows too much she is scandalous, if she doesn’t show enough she must be repressed! 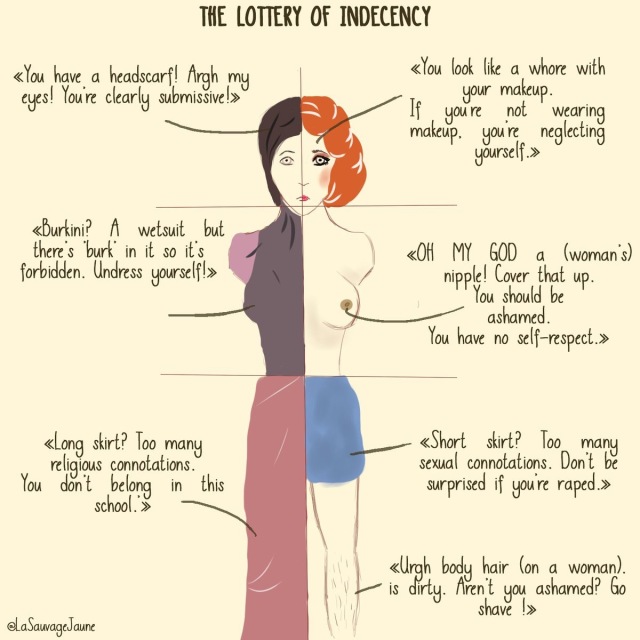 We won’t even begin to discuss the insanity that breast-feeding generates. What are a woman’s breasts for except to nurture a baby? If men (and unbelievably other women) are offended by this natural act then they should avert their eyes. Expecting a mother to feed her baby in a toilet stall in order to not offend you is ridiculous.

Yet society has no issue with breasts as objects of objectification or sexual attraction. That is warped.

My three all breastfed until the next one came into the picture. I had contractions when pregnant with Caitlin so stopped feeding Trevor. It got me into trouble on several occasions with right wing nazis. AKA the Religious Right, Alt-right, whatever you wish to brand this behavior. I was used to the laid back attitudes of my hippy friends in LA. Moving to repressed small town George on the southern coast of Africa was like stepping back in time. I had to rein it in.

My insomnia has continued all week. Last Monday I woke to howling wind and pouring rain but was in work for 7am, trudging across the foreshore, clutching my pepper spray through the dark streets having had only a few hours sleep. I had gotten in early to prepare for our client who was coming down from Johannesburg. Except I was a week off, they arrived today, not last Monday. FML.

We had the electricians come to move the electricity box and meter. When I was a kid it was called a ‘fuse box’ but it doesn’t have fuses, it has trip switches, so what was that about? Just another childhood “huh?” moment. The electrician moved the board from the kitchen to the garage, now we have to wait for the city of Cape Town to come move the meter. They only install prepaid meters now, and we are already on a prepaid unfortunately. It’s a pain in the arse!

Last Tuesday night I finally got the burger I had been craving. I cooked delicious bunless burgers stuffed with thick chunks of cheddar. I fried bacon until brown and crisp, removed it from the pan then fried a thinly sliced onion in a bit of butter and coated it with the lovely bits in the pan. Once the onions were brown I moved them to the side and added the burgers. We sliced mushrooms and fried them until brown then sprinkled with cheese and cream to make a sauce. On top of the burgers was crisp lettuce and creamy avocado slices. We made sweet potato wedges to go with it and it was all delicious!

While all of this deliciousness was being made I also made a lasagna sauce for the following night. Luckily Caitlin came home and helped.  I followed the Real Meal Revolution recipe (more or less) and fried chopped streaky bacon in a cast iron pan until brown, removed from the pan and fried a chopped onion and a gigantic red pepper in the bacon fat, then fried some mince and once done added a generous squidge of tomato paste and stirred it through lifting that lovely brown sediment at the bottom of the pan, then added passata and a tin of tomato. I left it to simmer for a few hours.

The next evening Retha came for dinner with her friend Emily who is visiting from France. 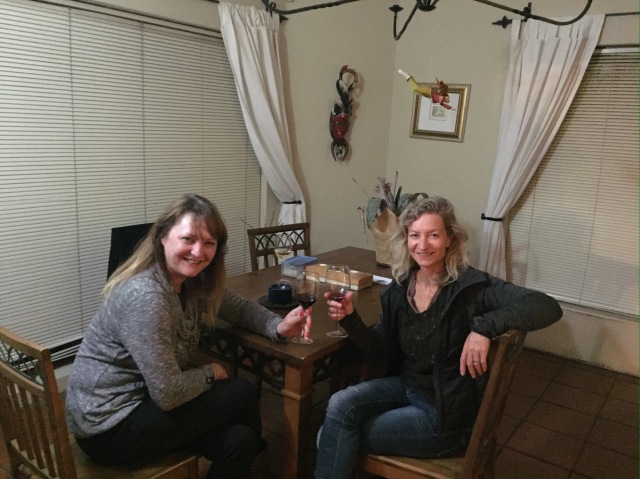 I layered the sauce I made the previous night with thinly sliced zucchini, marscapone and mozzarella. I made two rounds of the layers and baked it until brown. 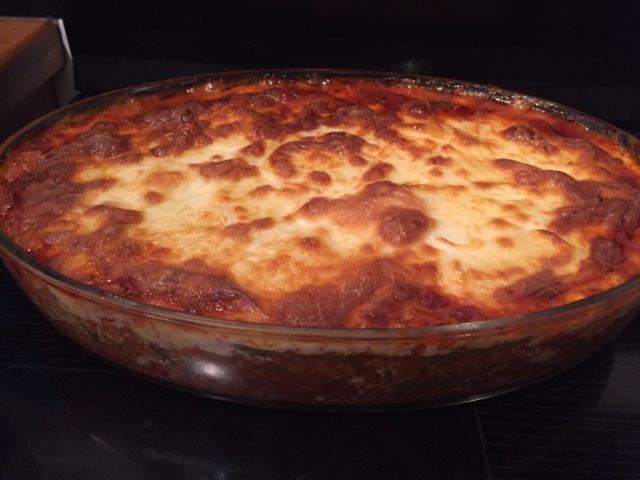 I just made a simple salad with gem lettuce, avocado, cucumber, rosa tomatoes and some raw zucchini slices to go with it. 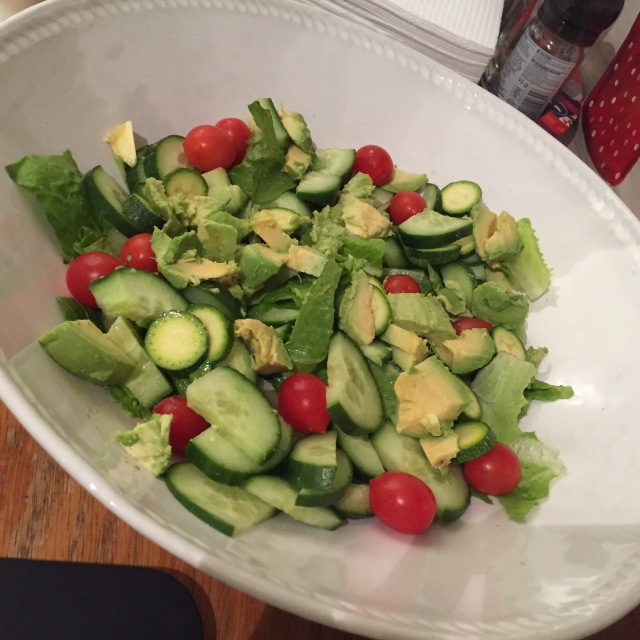 After they left that night I lay in bed for ages unable to sleep. I was struggling to function at life by this stage. Luckily Norm kindly went and shopped and cooked a dinner of delicious pork fillets, cauliflower mash and roasted veggies for dinner. It was lovely and I felt very spoiled.

I needed a bit of nurturing.

Friday finally came around as it inevitably does. We were both knackered and so we just got take aways. I had delicious fish and chips from our new local chippy. It was yummy.

That night I again couldn’t sleep. I watched 3am go past. I had to wake at 730 as my alarm went to remind me to take Pixie to the Chiro. I showered and Norm made me scrambled eggs and coffee.

Pixie and I shot off across the mountain. 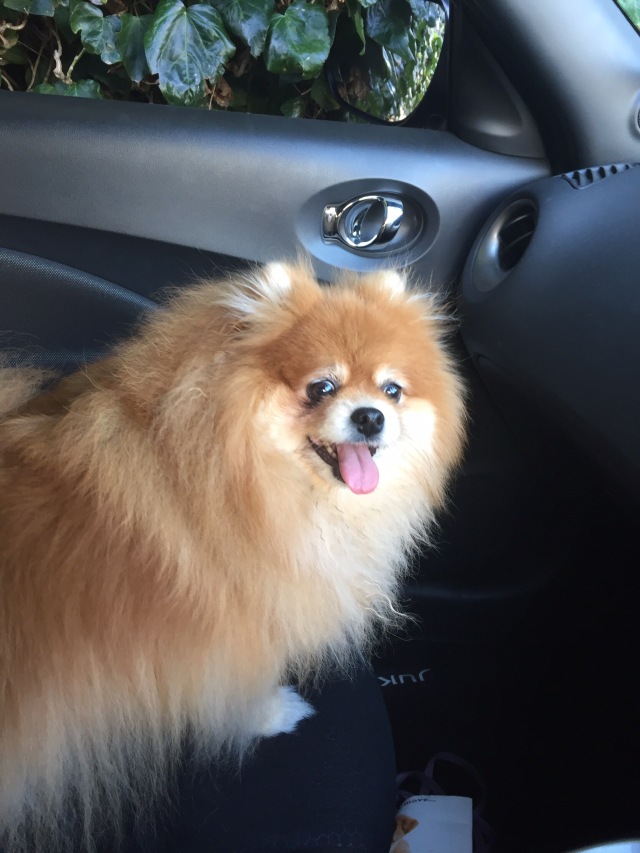 The fog was really thick. This is a valley which stretches as far as you can see, but it was just clouds of fog! It was like being in a plane. 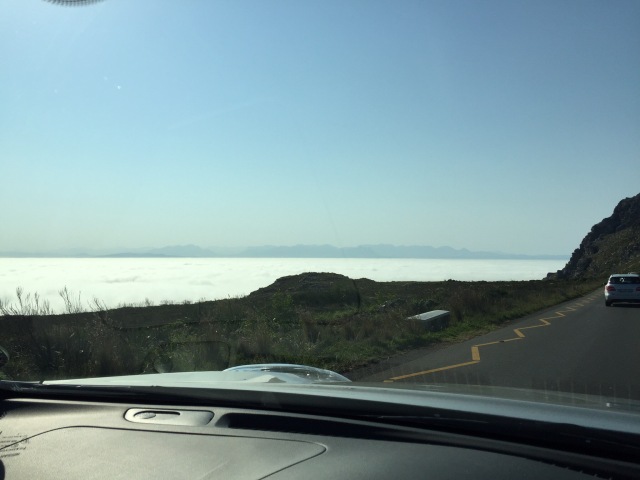 Pix and I were early so we had a little cuddle. 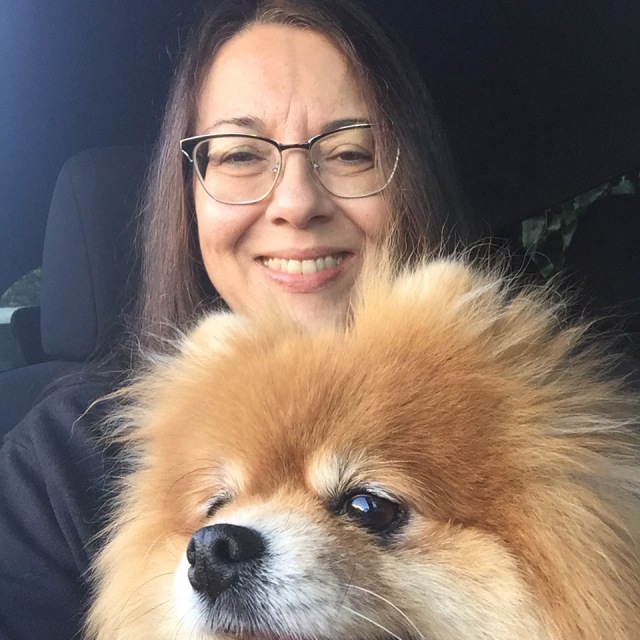 I had no makeup on but let’s not talk about that. I am never able to have normal eyes in a selfie. I either look half asleep or crazy.

Afterwards I took Pixie home and Norm took me to Retha’s. She was moving out of the house she had shared with Pierre. The house he chose to leave from. It was a significant move, packing their shared lives and deciding what to keep. Every item triggering memories for Retha.

By the time I arrived Retha’s friends were in full swing and loads had already been moved to her new cottage. 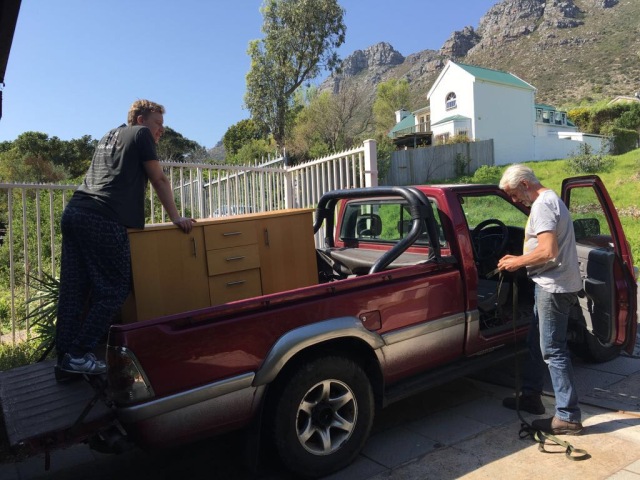 I went to the cottage and started unpacking. I managed to get the kitchen all mostly sorted and the fridge and freezer packed up before everything melted. After a very long day we all chilled out with a glass of wine. 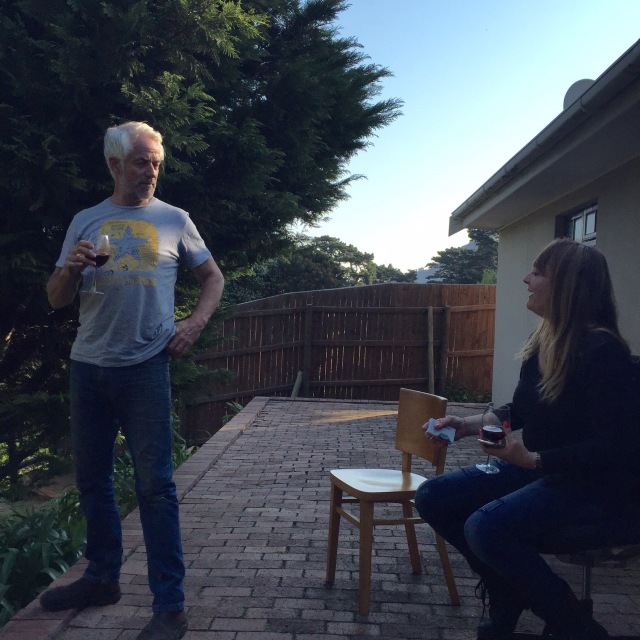 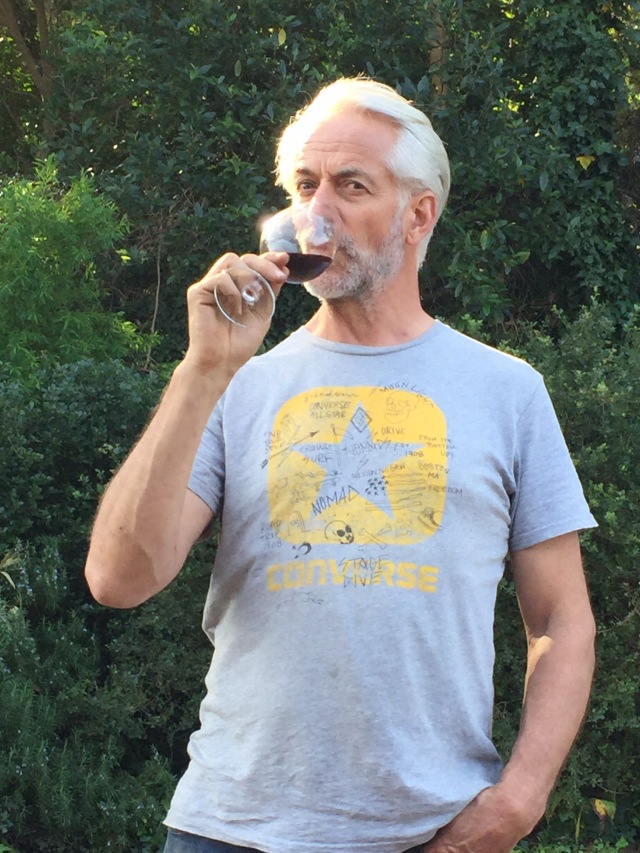 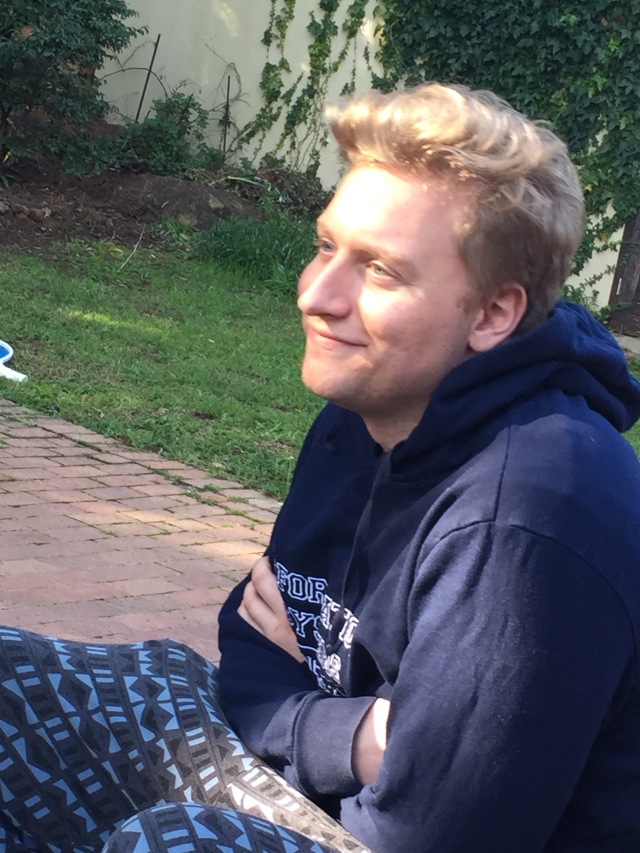 The view is amazing. The view is completely different from Retha and Pierre’s house, it’s from the other side of the valley. A total new perspective. I thought that quite symbolic. 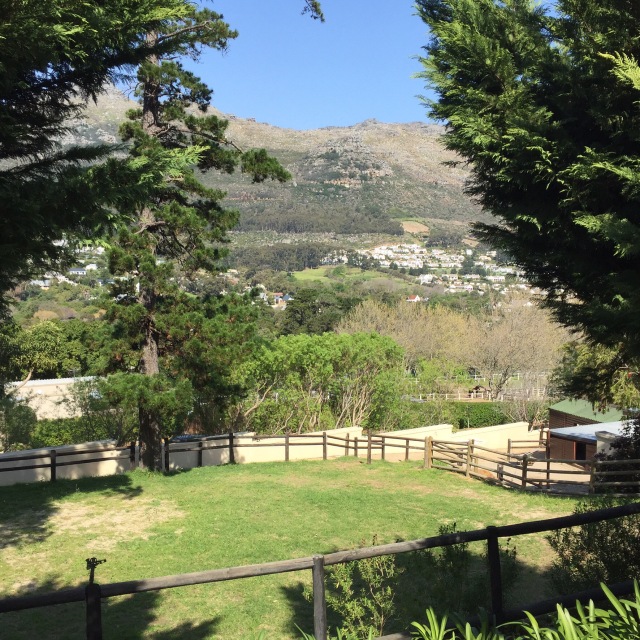 There are 2 stunning horses next door who trot about the paddock right in front of her cottage. 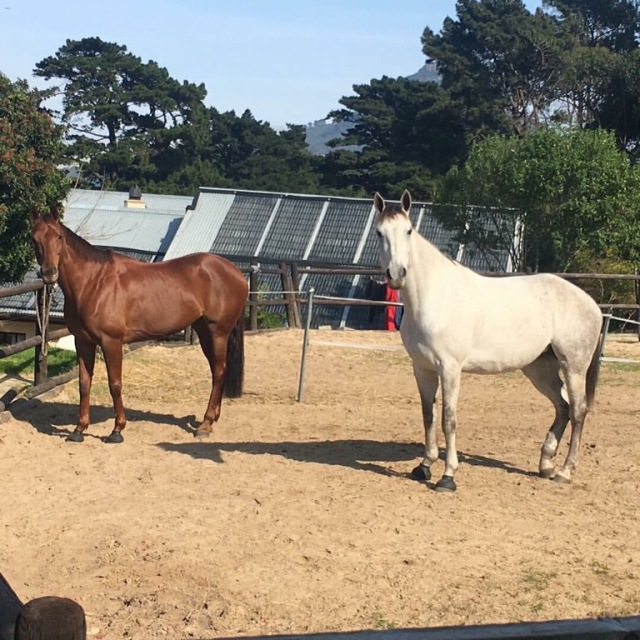 Or over for a peek at the new neighbour. 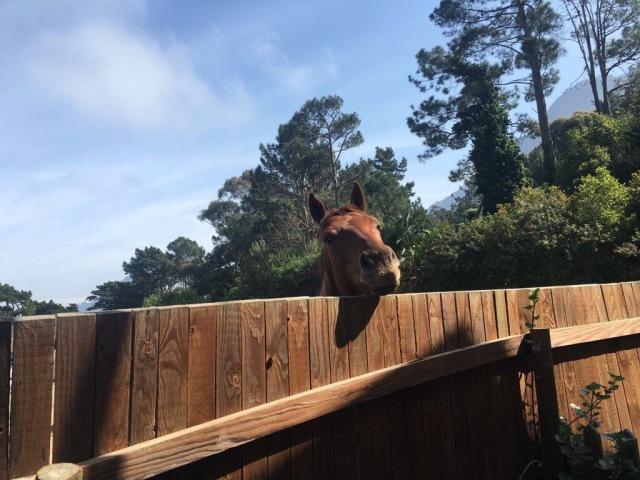 Norm and I stayed there Saturday until early evening then popped home to change and went out for dinner. We decided to go to our old fave The Indian Oven. We were delighted to discover that they do cauliflower rice! Norm had that but I didn’t have it though I cheated and had basmati rice and naan bread.

We shared the Panak paneer, spicy spinach in sauce with paneer cheese cubes. Norm had the chicken korma and I had prawn curry. 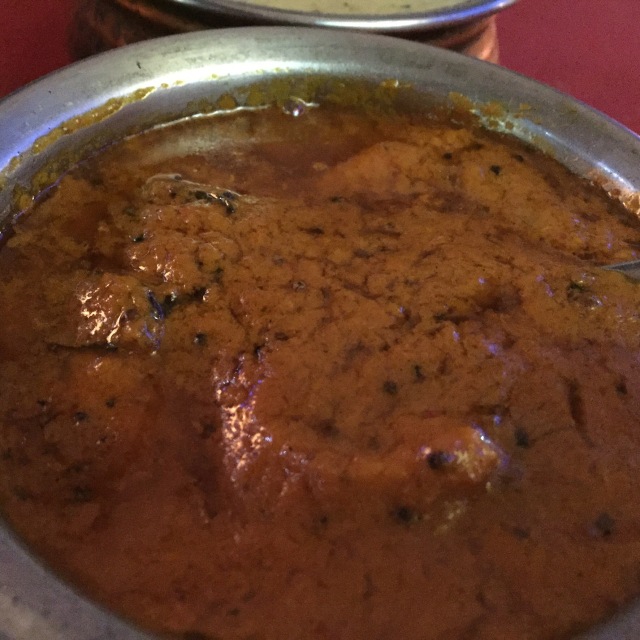 We even pushed the boat out and had some onion bhajis. 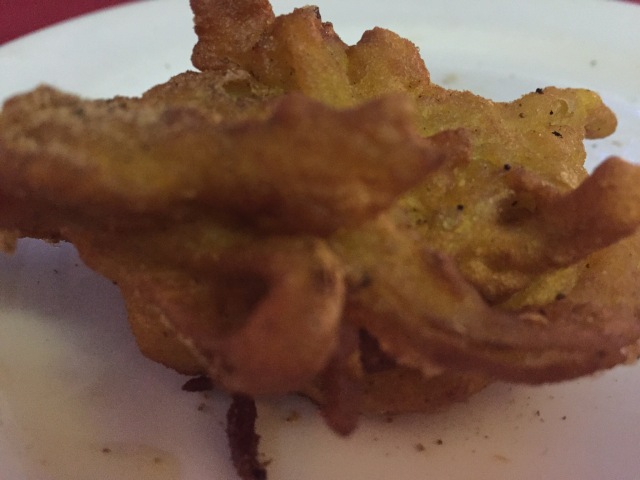 I was so happy. 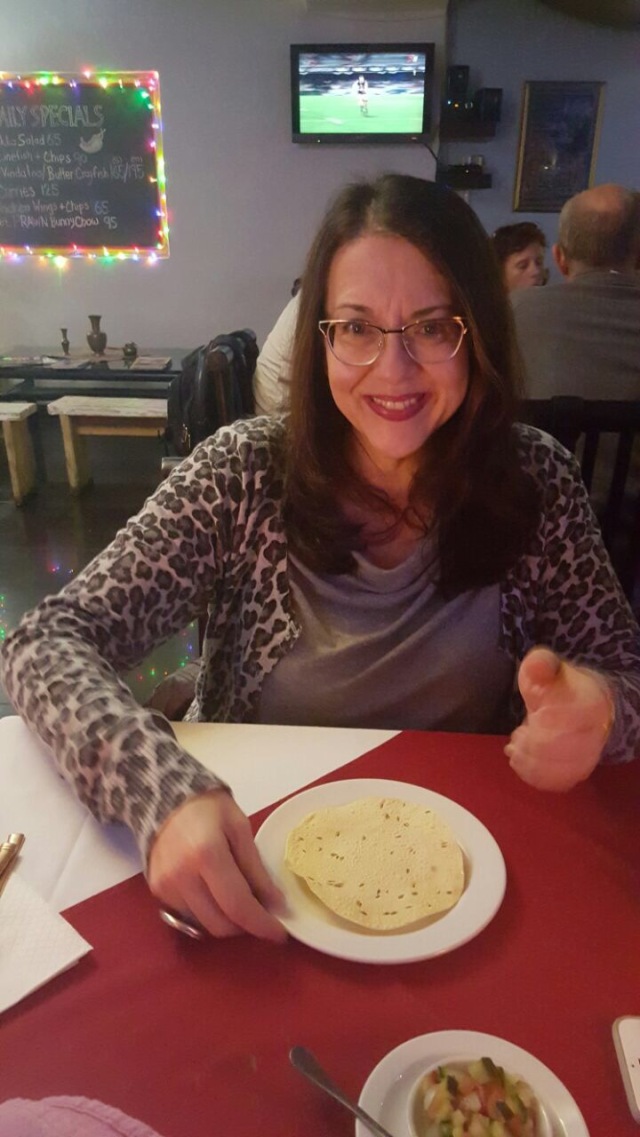 The place was packed, we got the last table and several people were turned away. It was so yummy.

We finished by 10 and came home to relax as we were so exhausted. It was a productive busy day! Sunday we wanted to have a pajama day but hunger drove us out as we had no food.

We went to The Riverway Cafe which we knew had recently been sold. The little details are what makes the entire interior so gorgeous there. 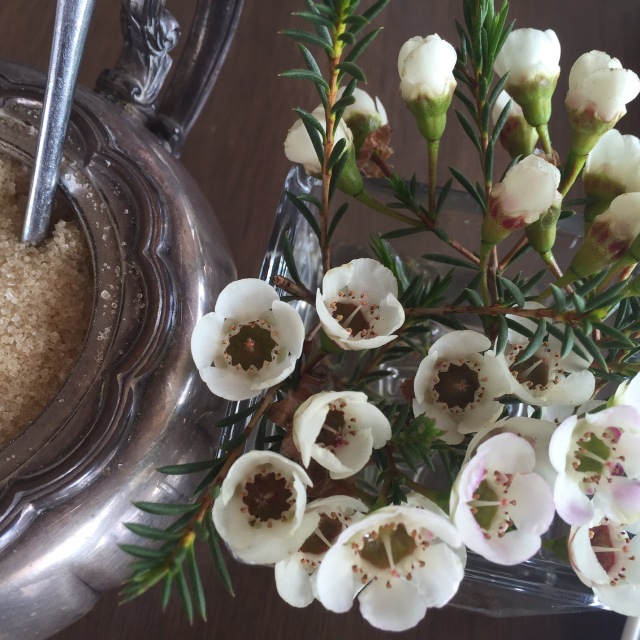 I hope it doesn’t lose that special something Julie brings.

We had a lovely brunch. 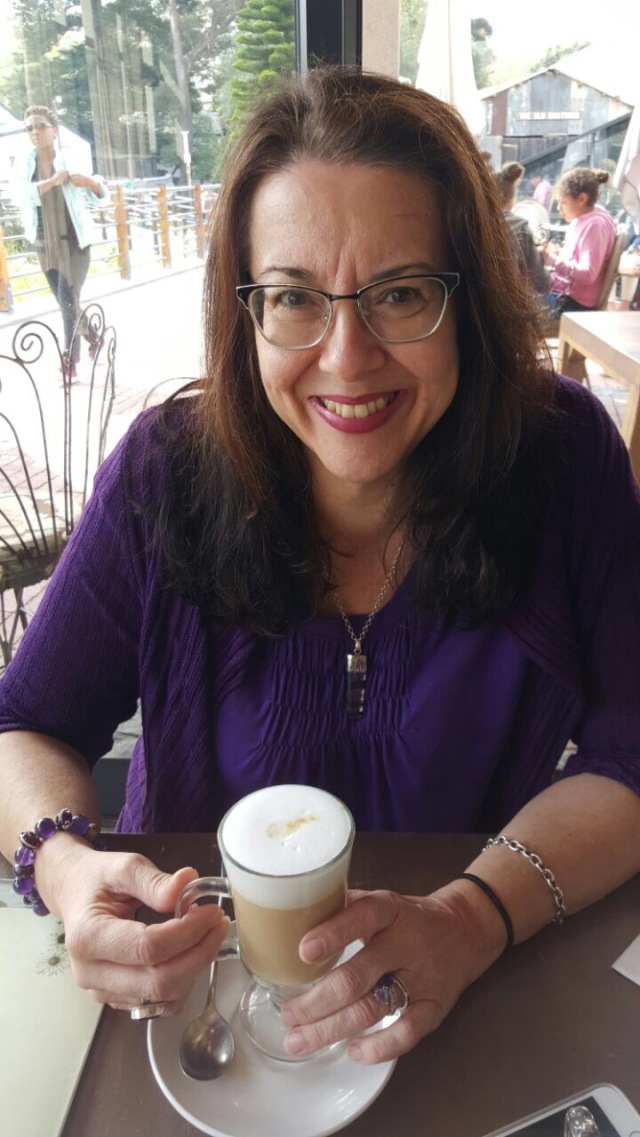 I had the Brekkie salad and Norm had a feta, bacon and avocado omelette with Banting bread. 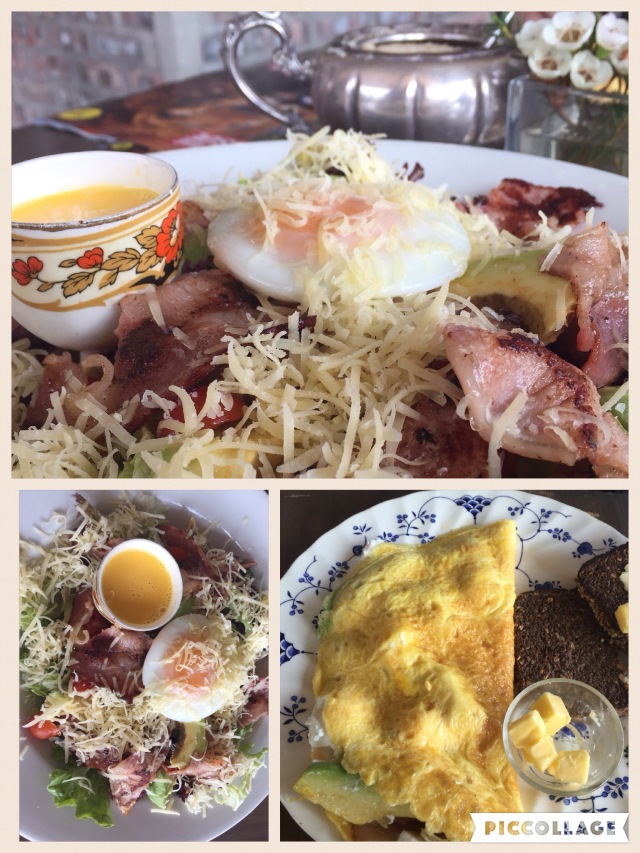 It was divine. We jokingly called it the Last Breakfast. We learned when Ragafellow’s changed hands, the personal approach from the Ragavelas family was missing, the burgers went downhill, I had gristle in two visits in a row, it really annoyed Norm that they stopped the little pickles and once the attention to minutiae goes, we go. I am hoping that it isn’t true but I suspect I will have to find a new brunch fave.

After brunch we hit the shops and then headed home. I put on a beef silverside roast in a big pot with carrots and chopped red pepper, garlic and onion and 2 tins of chopped tomato, a box of beef stock and some water. I let it simmer.

I popped out to get petrol and drove by Retha and she was all settled in already, her family had been busy! I hope she and the kitty cats settle in nicely.

Our clients arrived today and we had a day of meetings.I felt so odd for weeks now. Today was no exception. My lips were tingling. My head was thumping. I felt light headed and spaced out. I actually felt so ill I went to the staff nurse, but she wasn’t in.

That explains how exhausted and dizzy I have been. I thought it was my sinuses!

Tomorrow I will go to the nurse and ask her opinion then pop by the doc if need be. 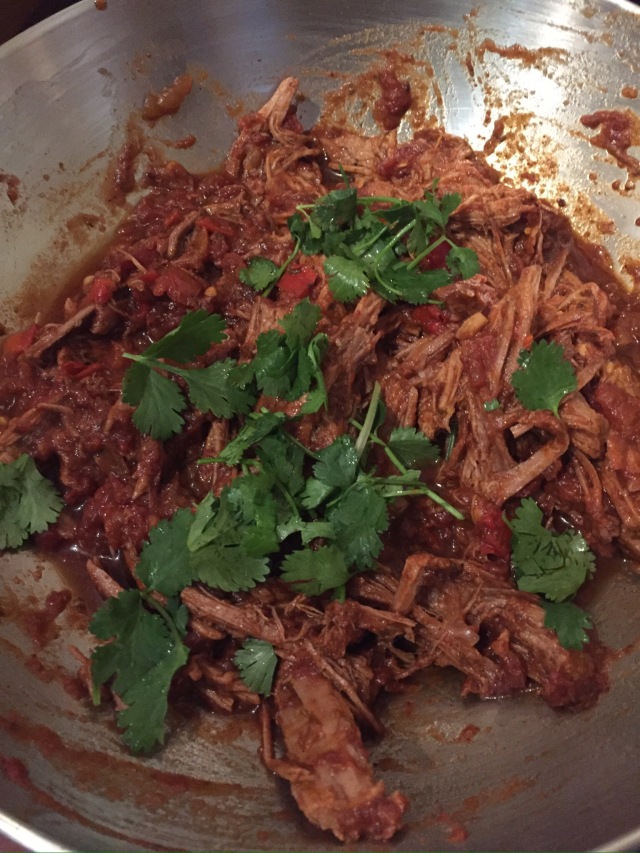 I sliced a yellow pepper and an onion and fried it in butter. 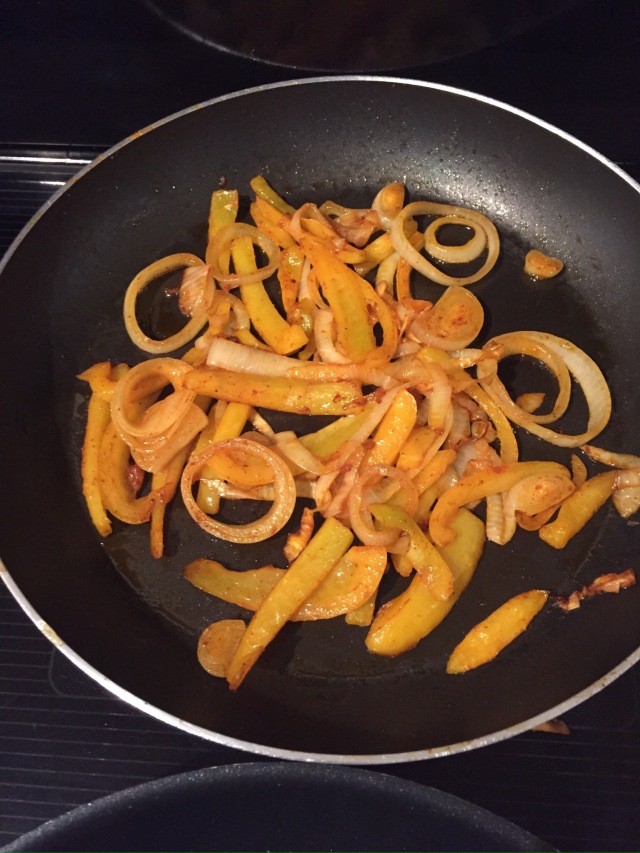 We made guacamole and chopped tomato, lettuce and more coriander. I made provolone cheese ‘shells’. 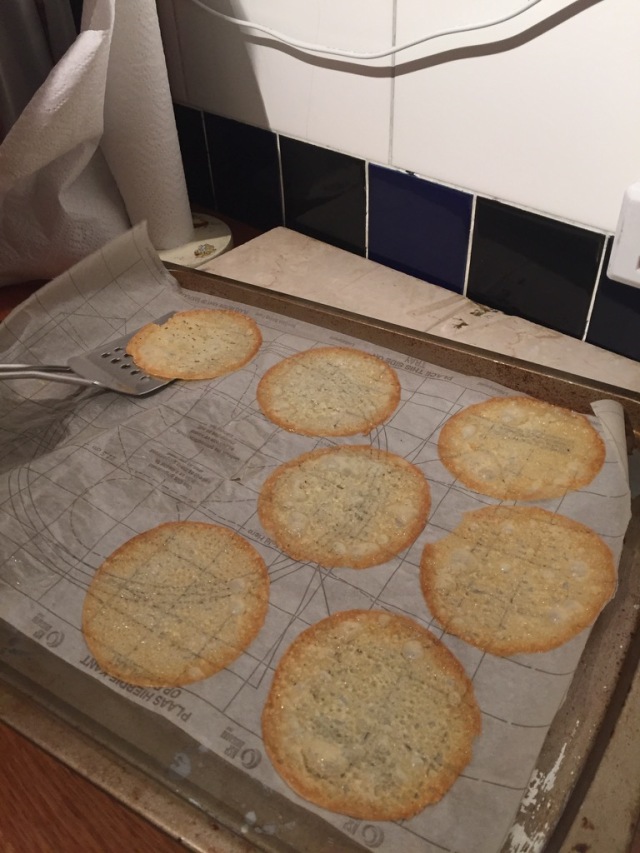 All put together like a mexican style salad. Topped with sour cream and it was so good. 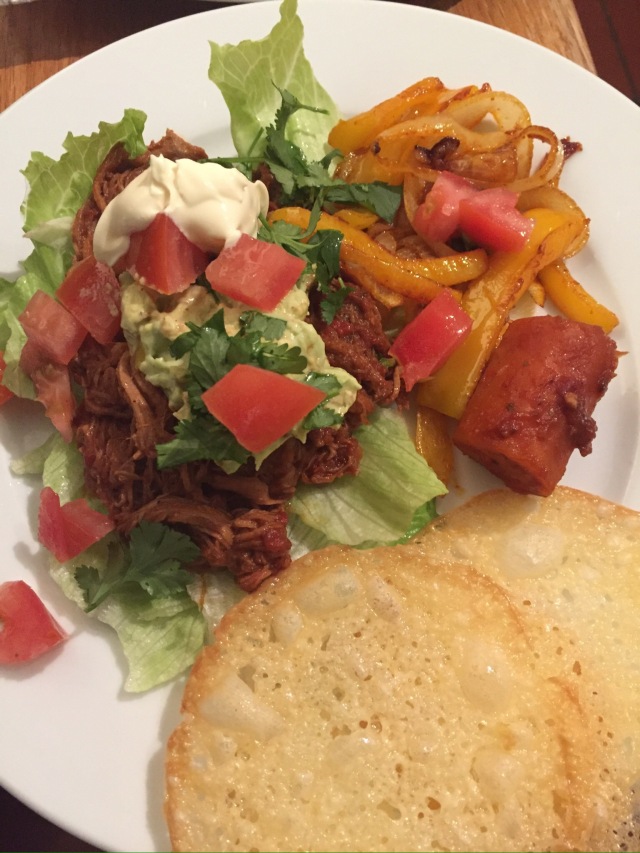 Tomorrow I’m hoping my doc takes me off the meds and I start to feel normal and not so odd. Actually I will always be odd. But you know what I mean, less like I’m in a vacuum.