I always think one should spoil themselves on their birthday, especially if no one else is going to. This year both my husband and my daughter were going away and were not here for my birthday. My other daughter Lily works late so I decided to organize my own itinerary of happiness, starting with booking 2 days off of work so that I had a 4 day weekend.

Last week on Tuesday night Norm had left for Namibia but Caitlin and Lily were home. Cordelia was working so I made sure to drop her before dark as the township can be dangerous. When she got home, Caitlin and I made the breakfast cups she has been dying to try, I googled a recipe but it was so overwhelming as there are millions so I just read a few and winged it. I precooked the bacon for Lily and I and we cooked mushrooms, fried onions, and homemade guacamole and potato rostis to go with it. We layered the mushrooms with the grated cheddar cheese and poured over the whipped eggs to which we had added fromage frais and a dash of milk. It was so delicious.

On Wednesday Caitlin flew to Joburg and I had Vanessa coming to the house to do my pedicure so I left work at 4. The weather was sunny finally.

After Vanessa left I made tacos and beans and heated some corn for Lily and I for our dinner. We stayed up far too late as I was off the next day.

I woke up early on my birthday to my usual furry faced friends.

Lily came through singing Happy Birthday and carrying a stunning black lily from Norm in absentia and a card. 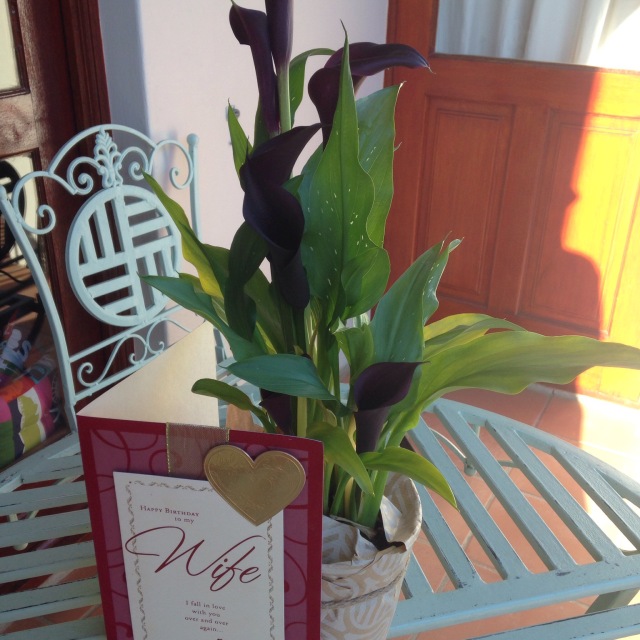 Lily also made a cute pic collage for my birthday.

I got dressed and headed off for breakfast with a couple of the book club girls.

We met at the newly relocated Earthworx Garden centre in Hout Bay. It’s about 5 minutes drive from my house. I chose the fried eggs with bacon and tomatoes.

It was simple and good. I finished my coffee and then needed a drink so I asked the manager for water. She asked didn’t I prefer juice as it was all fresh squeezed so I asked for orange juice. She went away and came back to say she had bought it fresh at spar on Monday but it now appeared to be off. Yuck. I would rather not know that. I asked for water rather.

I finished my food and still nothing came to drink. Because of my hernia my food often sticks and needs to be washed down. I went into the inside part of the cafe and found the manager sitting reading the paper and I asked again for water. She said “oh didn’t you get it? I told her to bring it” while pointing at the girl running round serving the busy cafe. I wanted to ask why she didn’t bring it herself rather than sit down to read the paper, but never mind it was my birthday so I did not want any aggro.

We decided we had to have cake and they had conveniently just iced one so we asked for carrot cake with 3 forks. There was no candle so I pretended to blow out the pretty flower. As you do. 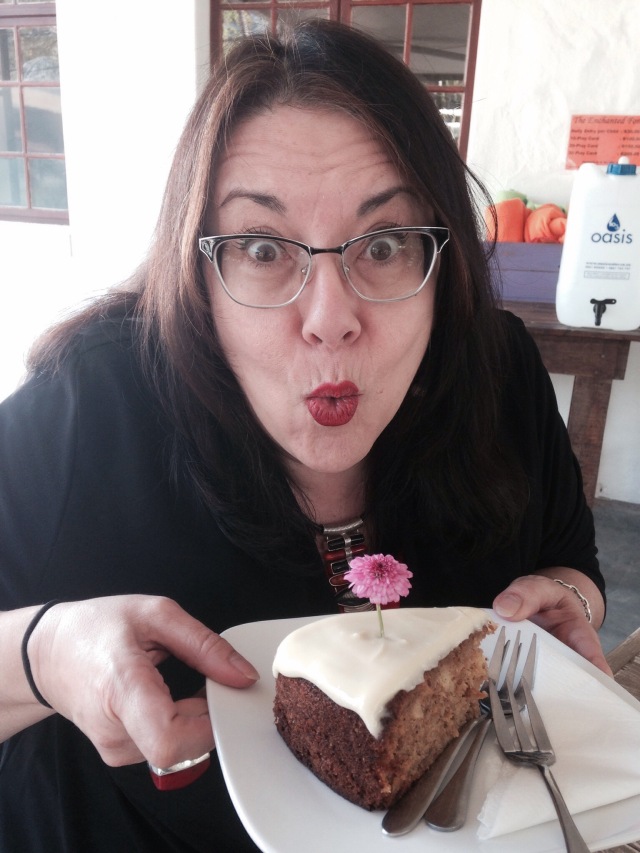 We had a lovely morning and Dawn gave me chocs and Louise a gorgeous koi decorated platter and home made lemon marmalade made by her Mum from Louise’s own trees. 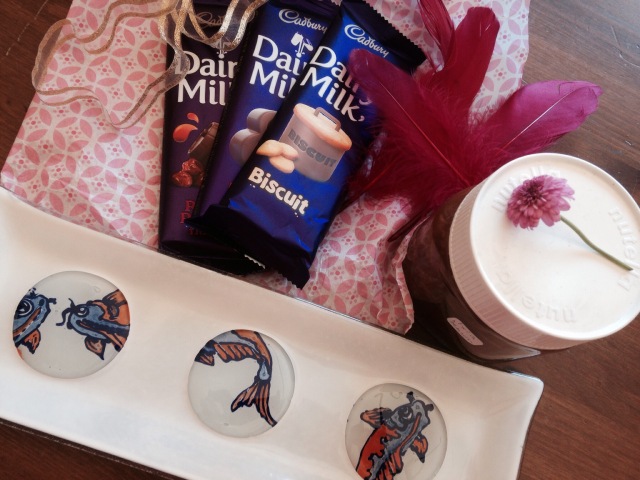 I had a lovely morning and came home to chill out in the sun with the pups. We all enjoyed the beautiful weather.

That evening Pierre came to collect me and drop Retha and I at Kitima. It is also about a 5 minute drive from my house, but the roadworks mean we have to go all the way around town so it’s a pain. Still less than ten minutes, but a pain.

Our friend Elmari joined us.

We had lots of cocktails and lots of dim sum and sushi. 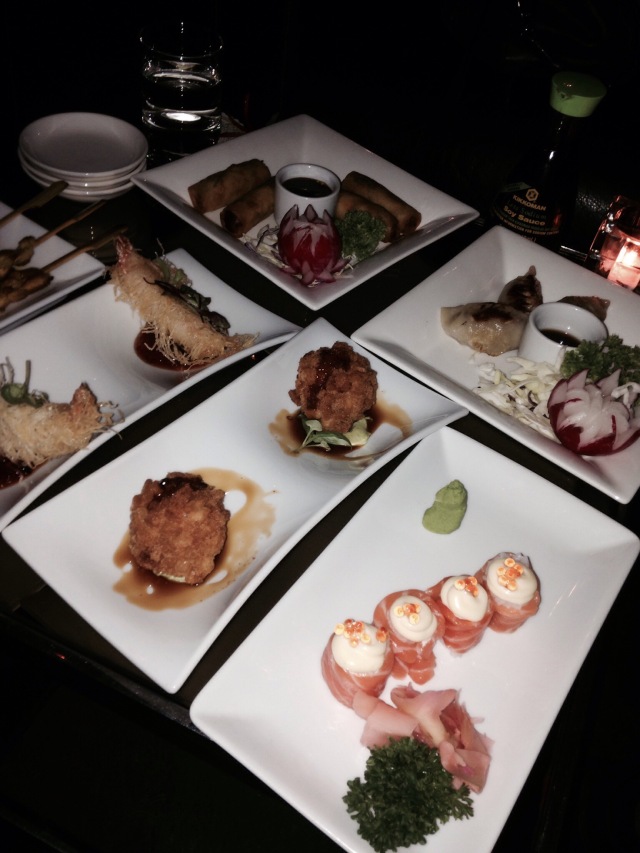 I will try and remember what all we ordered. We had:

– Salmon Roses 2 portions at R70 for 4 pieces of thinly sliced salmon delicately wrapped around a core of sushi rice topped with salmon caviar,

For dessert I had chocolate fondant.

And Retha had the creme brûlée. 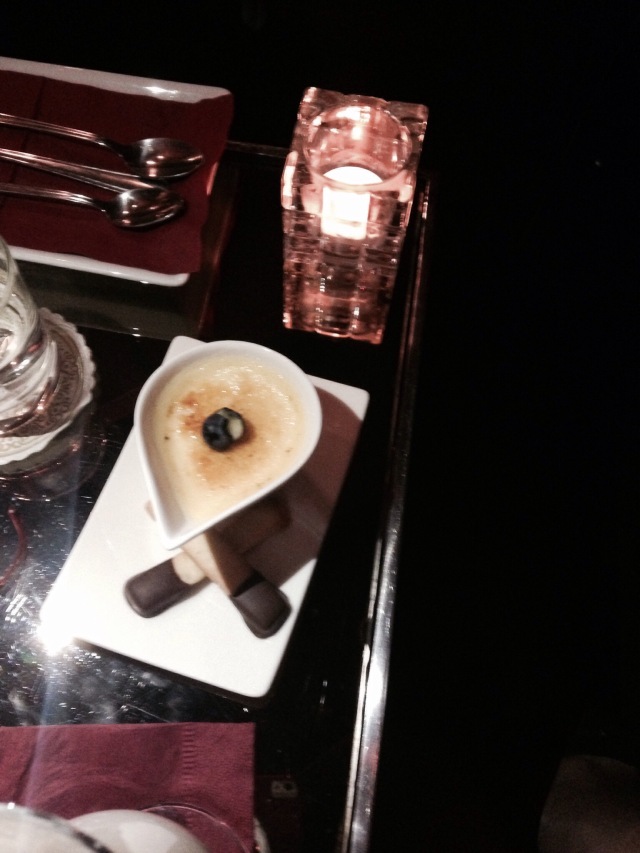 We had a lovely relaxed evening then headed back to mine as it made it much easier for Pierre to collect Retha without having to go right round town. Elmari kindly dropped us.

We sat outside on the back patio in the warm evening air with Lily until Pierre arrived. It was a stunning evening. Lily gave me the gift she and Caitlin had bought together, they tried to get Mumford and Sons tickets which had gone on sale that day, but they sold out in minutes. Instead we got tickets for the family to see Rodriguez which will be good I hope. His demons sometimes get the best of his performances. Such a sad story, if you never saw the documentary Searching For Sugarman then you should, it’s poignant and sad but very interesting.

By this time it was about 11pm and Norm still hadn’t phoned to wish me happy birthday. 😕😢 he is in big trouble.

Friday morning Lily and I were of course woken early by the dogs. We made breakfast of an omelette stuffed with the leftover taco meat and cheese. We headed off to Chapman’s Peak Drive to get over to Kalk Bay. 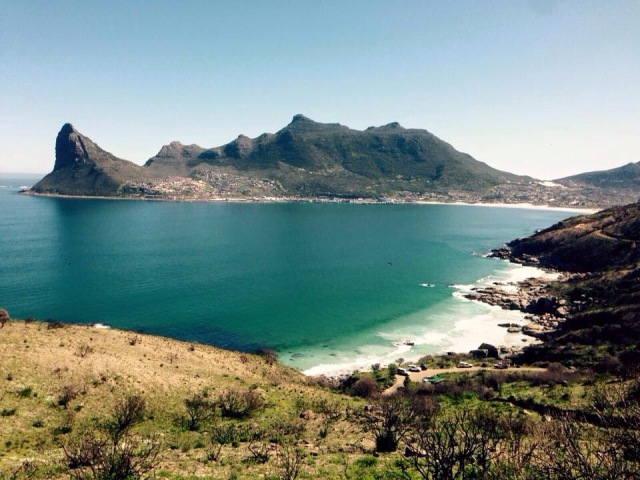 We stopped at one of the picnic spots in the shade to enjoy the view.

We sat in the shade of a huge tree and drank in the stunning view. 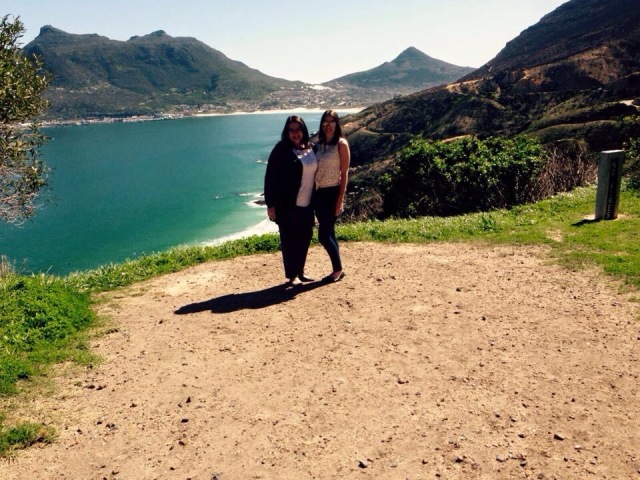 Eventually we toddled off to Kalk Bay. There are roadworks all over and we spent ages sitting in the sun at stop and goes. We went to the far end of town and parked. We dandered down the sidewalk popping into antique shops, clothing shops, garden shops and all sorts of cool unique little spots. We bought ice creams at the Ice Cafe, known among locals as one of the best ice cream spots in Cape Town. We climbed up on the stools and looked out of the big bay window and enjoyed a few minutes out of the glaring sun.

We finished our ice creams and then hit the shops on the opposite side of the road, we had a lovely day and bought some charming bits and pieces. I treated myself to a pink Quartz necklace and some nice Moroccan style jewelry. 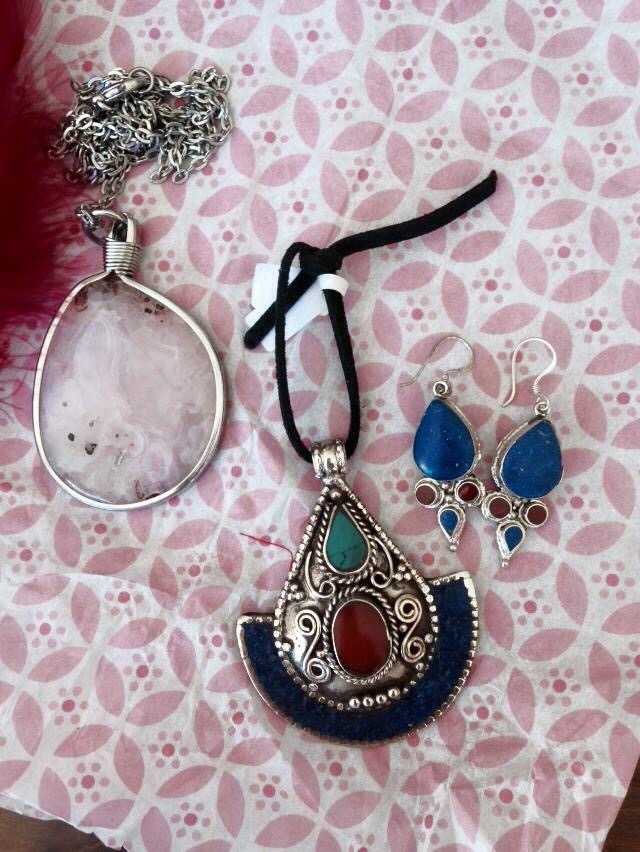 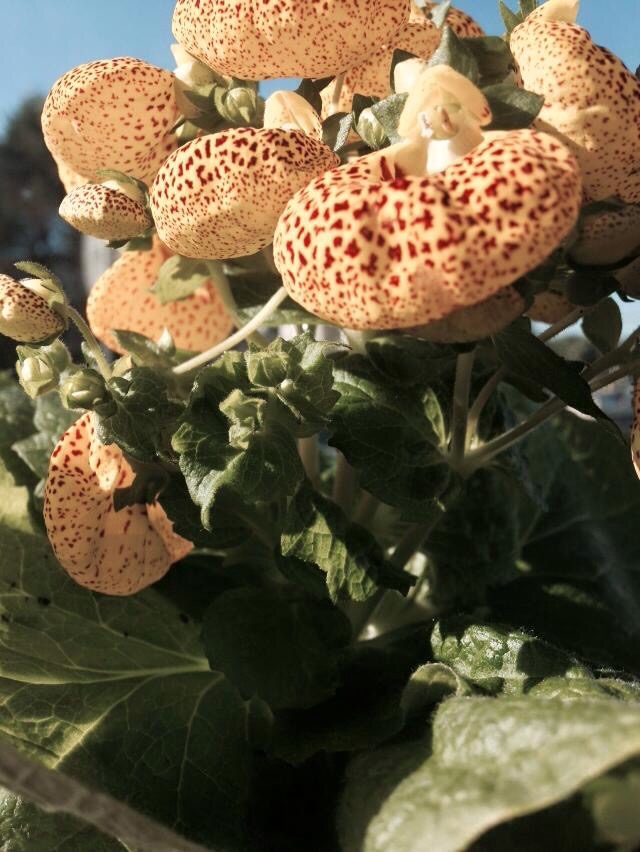 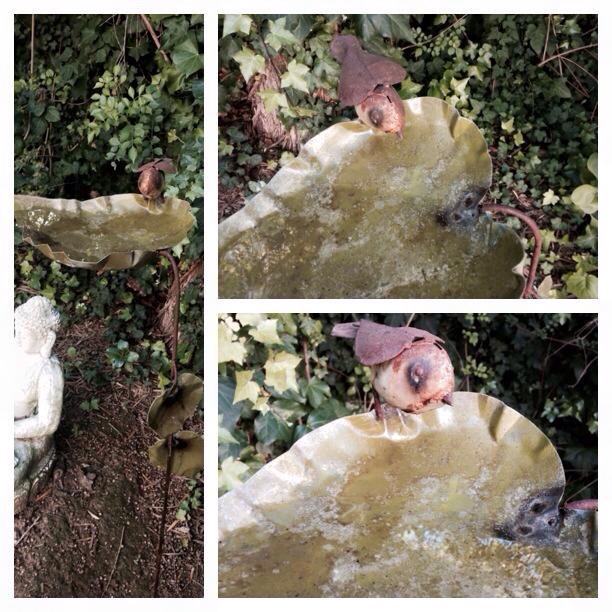 We had such a nice day out and got home just a few minutes before Josh arrived from George. They headed off to town to join friends for dinner and Norm finally got home about 9pm. He had a big bump on his head and a sore back and knees as he managed to trip and land on his noggin when leaving the airport. He was being hassled by a so called security guard at the airport. Nice. I’ve tried to convince him it had nothing to do with me that he fell just after he told me he had arrived in Cape Town…..like I would send bad juju to cause him harm just because I’m angry? 🔫💣🔪

We spent the rest of Friday evening at home, I was tired from my busy day in the boiling heat, and he was sore from bouncing round the car park on his head.

Saturday was a scorcher of almost 30degrees. I sat by the pool in the shade with the pups mooching round the garden.

We spent a relaxing day and then that evening we went to Cheyne’s in Hout Bay.

Again – another gem 5 minutes from my front door. I love Hout Bay.

The concept here is tasting sized servings. You choose and share or sample various items on your own.

As usual my pics are rubbish. I’m sorry Cheyne but it was damned dark.

We had the firecracker crayfish. 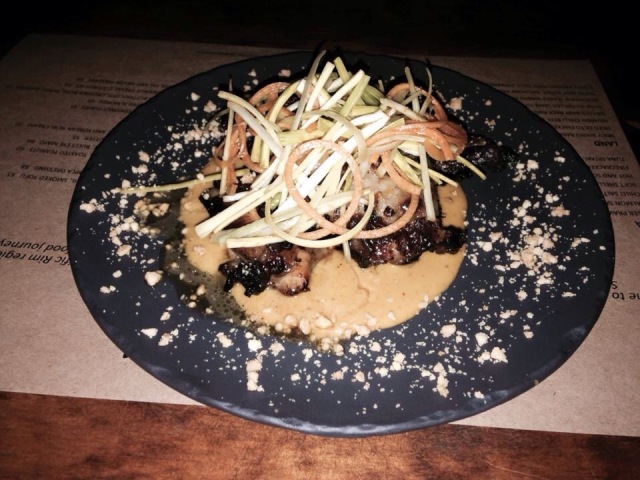 Norman had the cheese plate.

And I had the peanut butter shake.

It was all so divine, my fave was probably the Mombai chili beef. We came back home and relaxed after, we were so stuffed!

The final step in Norman’s attempts to redeem himself was the jewel in the crown of a rather amazing weekend. He had booked us in for lunch at La Colombe. This venue has recently moved to Silvermist Wine Estate and has been named on the S.Pellegrino’s World’s Top Restaurants list. It is easy to see why. Today I think I had the best meal I’ve ever eaten.

The view was stunning. 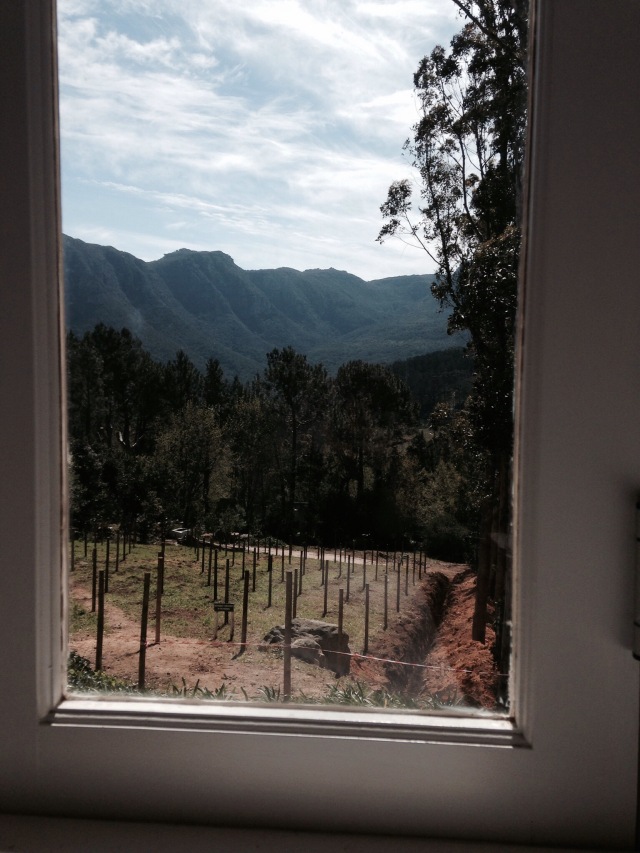 We had seats right by the window on the bright veranda. Note new necklace getting an outing.

Norm chose a carafe of the Silvermist Sauvignon Blanc. As it was midday we didn’t want to get too tipsy.

We were presented with a complimentary amuse bouche in the cutest little container. There was a big chunk of bread, a layered glass jar of hummus, tapenade and sun-dried tomato. A separate dish of ‘virgin butter’ and a divine wee tuna tin.

I have never heard of virgin butter and was afraid to ask if it comes from virginal cows or virginal churners?

We opted for the tasting menu at R595 each. We were torn by the ala carte fillet special so the charming waiter offered to change the lamb for beef if we chose the tasting menu! Decision made!

We were served the Poached oyster, lemon, caviar, seaweed and apple course. It was so delicious the seaweed light and crispy, the oyster fresh.

There was a mini course of bread and some sort of butter but it’s not on the menu so not sure what it was. It came with their own cured chorizo. Very yummy!

Next we had QUAIL AND CELERIAC: Pan seared quail breast, confit leg, celeriac and truffle espuma, smoked goat cheese. The quail was tender and not overwhelming with gaminess. The espuma had a gorgeous almost nutty taste.

This was incredible. I wanted to lick the plate. So delicious!

Next we had a course of a palate cleanser of little balls of frozen Passion fruit and thyme. These are little works of art. 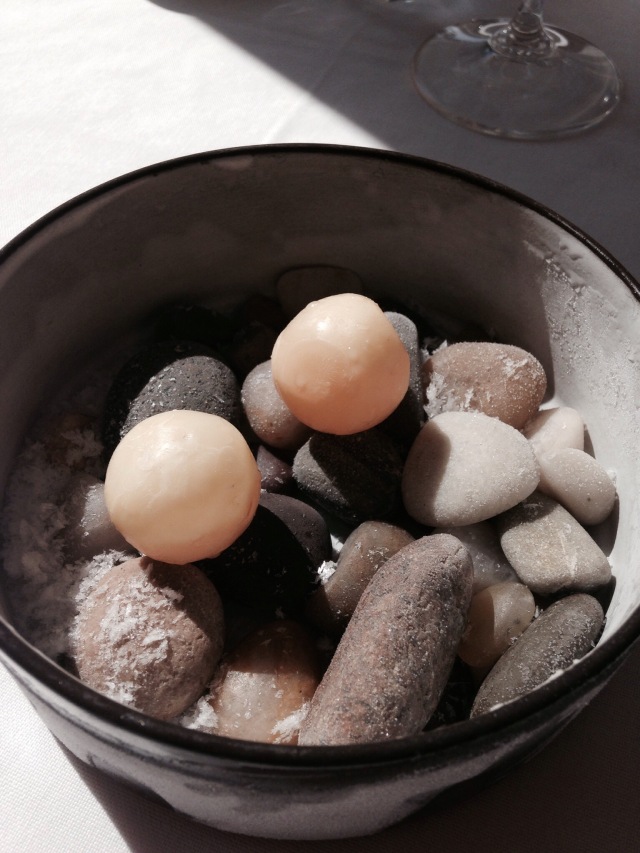 The sorbet is frozen into balls, speared with a toothpick, rolled in cocoa butter and refrozen. You pop the whole thing in your mouth and the warmth of your mouth melts the butter, filling your mouth with a delightful sweet slush. We watched another diner try to be posh and spear his delicately with a fork only to have it disappear. Oops. Get yer fingers in there!

Next we had the SCALLOP AND PORK BELLY: Pan fried scallop, Asian style pork, kimchi, sweetcorn, lemongrass and ginger velouté.

Scallops are one of my all time fave foods, and the combo of scallop and pork is always a winner. This was hands down the best pork belly I have ever had. Rich, sweet, full of flavour yet no gelatinous slabs of fat. The thin little slivers of light crispy crackling was amazing. 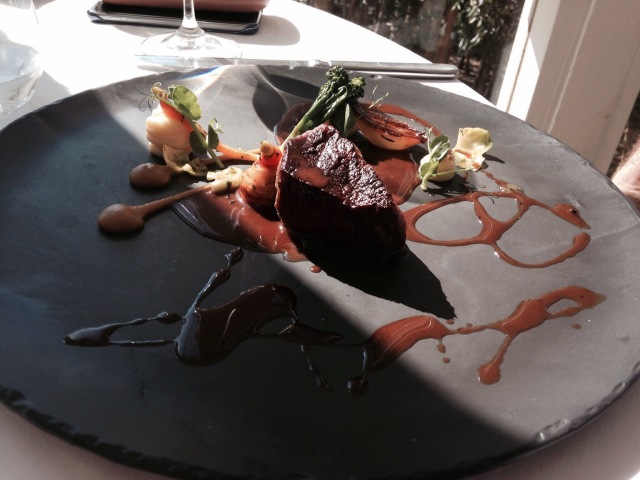 We had a coffee and then the dessert arrived. RHUBARB, STRAWBERRY AND ELDERBERRY: Rhubarb financier, strawberry purée, elderberry ice cream and pea pudding. No idea what a ‘financier’ is in regards to an edible object? Okay some rude jokes about hookers come to mind, but who knows?

I’m not a big rhubarb fan but this was divine! Sweet and light and refreshing. A perfect end to a faultless menu.
When they bring the bill they bring a little box of La Colombe Petit Fours. There is a truffle, a piece of hard fudge and a fruity jelly one.

We had such a wonderful day and Norman has more than redeemed himself for his neglect. I feel very spoiled.

Now it’s time to tuck away my tiara of specialness and go back to reality. 😋