Today I continued in my quest for the perfect Eggs Benedict. We decided to move our Saturday shopping trip to Sunday rather as that means the week’s dinners have 1 less day to age as we do find that Pick N Pay’s veg tends not to last as long as Woolies.

Yesterday was such a lazy day, the most strenuous activity I indulged in was showering and washing my hair and changing into clean PJs,

Lily brought a divine lemon meringue pie home for me.

She got it from the Hout Bay Harbour Market from the Cinnamon stall.

It was delicious! Yum. They were about R30 each.

As mentioned we tried Mimmi’s and I decided on the Pavarotti which is tomato, mozzarella, Bolognese sauce, parmesan shavings for 110 and a potion goes to the Sunflower Fund. 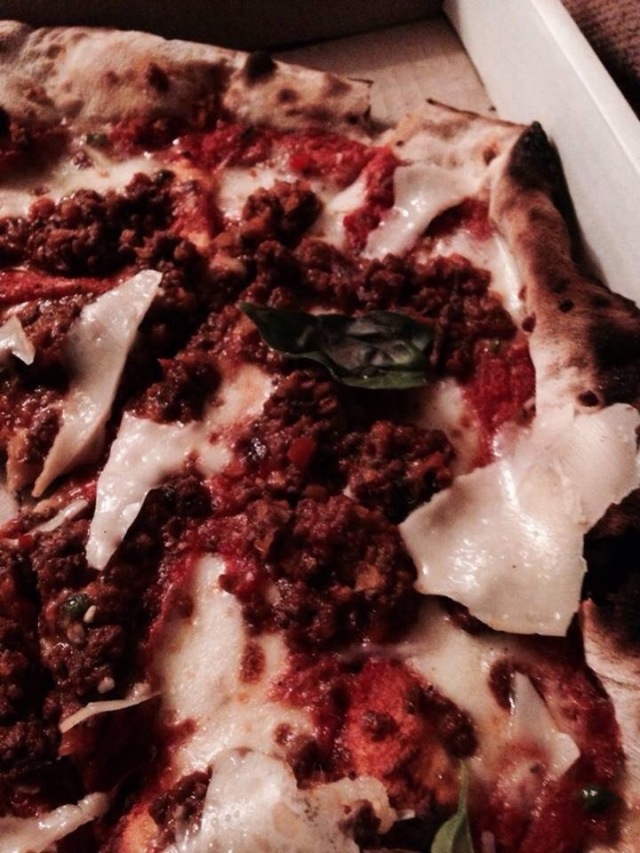 We watched a few movies, one with Hugh Grant as a sleazy teacher starring with Marisa Tomei. I like her and he’s still hot. Much more so without the floppy hair. Him not her. We all cosied round the heater.

Today we got up late and left about noon. We needed a clothes dryer as the constant rain means we have washing draped all over the house to dry. At least my exercise bike is finally getting some use.

So we managed to find a simple wooden one at spar. Then we went to Deli Delish for brunch as we had heard they changed ownership. The last time we went was New Years and it was horrid.

The place was buzzing with people, we nabbed the last table.

It wasn’t wrapped in paper and Norm certainly did not want jalapeño but he seemed to enjoy it.

I ordered the PROSCIUTTO BENEDICT at R69. The menu described it as “Traditional eggs benedict served with crispy prosciutto shavings.”

Well, I certainly would not call it traditional by any stretch.

It was basically poached eggs with hollandaise sauce, it was delicious hollandaise however. The pancetta was very crispy and could only be eaten with my hands. You could not get a fork in it. I asked for medium eggs and they were soft and runny, exactly as I wanted.

However it was not eggs Benedict. But it was delicious regardless.

We finished eating and ran over to Vodacom to try and sort out my bill, with no luck. We then popped in to swap the jeans I had bought Norm. We then did our weekly shop.

Tonight I made barbecue pork chops, gem squash, Brussels sprouts and a bit of corn.

I made soy sausages for Caitlin. I have also made a creamy chicken and mushroom dish for tomorrow night’s dinner. I browned the chicken and mushrooms and then added some cream of mushroom soup and a tin of coconut milk. I fried an onion, a yellow pepper and lots of garlic and then blitzed it all so Lily didn’t see the onion then added that to the mix, it’s simmered for several hours. Tomorrow I’ll make some mashed potato and steam broccoli to go with it.

We all feel so much more energetic eating healthy home cooked food. Back to work tomorrow. I feel so much more in control of my life. I’ve sorted fresh fruit and yogurt for my breakfast and made a pork sandwich for my lunch from my leftovers. It saves me a fortune on inedible rubbish from my work canteen. I hope I have the determination to keep it up.

Enjoy your week everyone. Xoxo