This has been a few weeks full of a lot of drama. Both negative and positive.

Last week a young man named Dede Chikala was murdered in the township in Hout Bay. He was Congolese and was in South Africa studying. This was such a tragedy. This is now the second stabbing in the same area, and there has been a child raped at this same place. There is an abandoned clinic there, or at least there is a shell of a building. It provides shelter for various criminals. Locally it is known as The White House.

It is throwing distance from the police station.

Yes, a derelict meth den owned by the City of Cape Town and right in sight of the police station is a hideout for murderers and rapists.

You couldn’t make it up. But that’s life in Africa.

People in rural areas have their own justice system.

The Congolese men in the township formed a group and marched into the shacks of the young boys who allegedly murdered Dede and took them to the police station. All 3 accused are now in custody.

There was a memorial the following day after Dede died and several politicians came and paid their respects, I hope it is more than lip service. I hope something positive comes from this man’s death.

Tonight the White House burned, rumour is that it was set alight by people from the township. To most in Hout Bay its demise is long overdue.

We couldn’t attend the memorial. On Thursday afternoon I was added to a whatsapp group and then we were advised that we were invited to attend a last minute party the following day. It was all a surprise for my friends girlfriend.

I asked for the time off and was happy that my project manager was feeling generous. I arrived at work on Friday at 8, Norm dropped me then took my car off to work a bit himself. We left just after 10.30 for the party which was beginning at 11.

Norm picked me up and we headed to Radisson Blu in Mouille Point but Norm and I arrived much earlier than the others so we relaxed and had a drink. And why not?

I had a strawberry daiquiri as always. 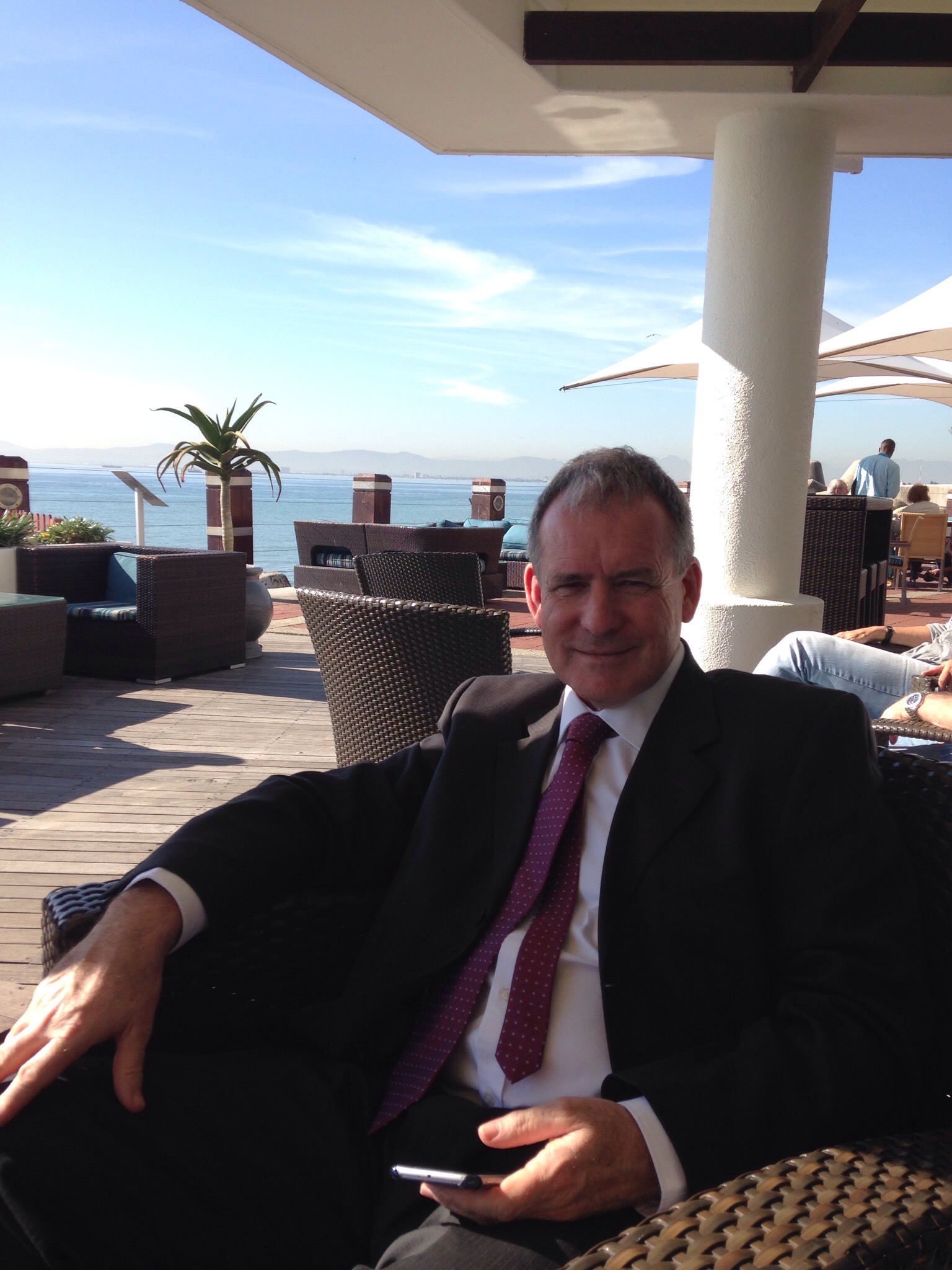 The view is so amazingly gorgeous there. And I don’t just mean Norm. 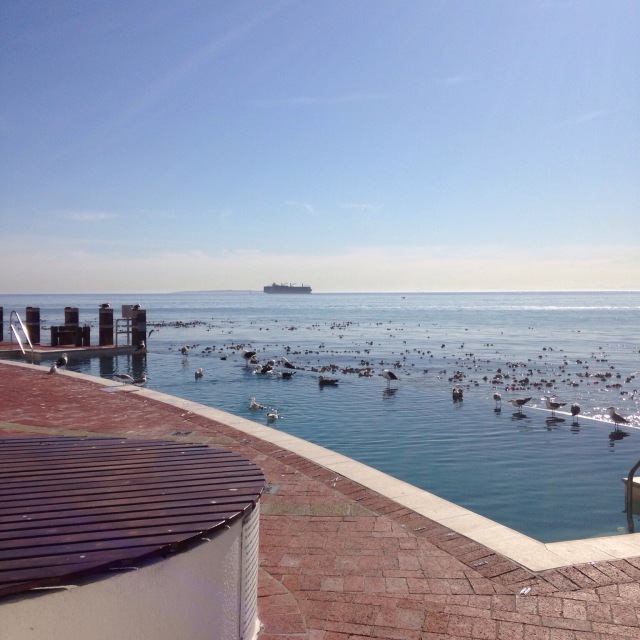 It wasn’t long before everyone else arrived and we moved to the private room my friend had booked to surprise his girlfriend. We toasted happy birthday with the bubbly and snacks were served to munch on.

We spent a few hours there but had some things with our household to sort out and we headed home. We met up with everyone again later at Blue’s Restaurant which has been around for decades, but they have lost their mojo.

The problem is they think that is enough.

It isn’t. The place very sparsely booked, we only phoned to book a few hours before, as we decided to go for a meal at the last minute.  A venue like that which was producing good food even at a high price should be in such demand that you would never get a table for 10 at the last minute especially on a Friday night.

We were given a menu and then the waiter proceeded to mention all the things that weren’t available as well as the ‘changed things’. I can’t understand reworking your menu without changing the actual printed menu? The printed menu is not the same as the menu on their website either. The line fish sounded good, but it was served on a bed of mixed beans in a mussel and Napoli sauce. That put me off and it did look as unappetizing as it sounds. I ordered the chicken supreme on a bed of risotto at R130.

We were all starving and eager for our food to appear. The food was all on the table other than the 2 portions of lamb, so we waited and waited. It was so long I actually asked the waiter where they were. Those who had been served were waiting politely for the entire table to be served before starting and our food was getting cold. Finally we all had our food and could eat.

The chicken had a crispy flavoured outside. The skin seemed to have a Parmesan flavour and the inside was stuffed with a mix of chopped peppers. There were a few bits of rocket and sun dried tomatoes on the plate.

The risotto had a slight lemony taste which was delicious. It was tender and creamy. The risotto went well with the chicken and it was tasty. I wasn’t so keen on the stuffing but it was edible, just not to my personal taste.

Norm had the mushroom risotto at R110. He said “it was ok I had no complaints”. So, there you go.

The people who had the lamb shank loved it. It was huge and came on a large bed of mash with carrots which had been cooked in the lamb pot and looked delicious. This looked like a great dish. The other nice looking dish was the calamari.

We all fancied a celebratory dessert and when the waiter offered the chocolate fondant I positively drooled. We ordered coffees and desserts. A few minutes later the waiter comes to tell us that the fondant did not set properly and they can’t serve it.

What?! Grrrr. I half heartedly ordered the creme brûlée and hoped for the best. It was nice, not the best I’ve had but not the worst. It came with a slightly lemon flavoured biscotti type biscuit. 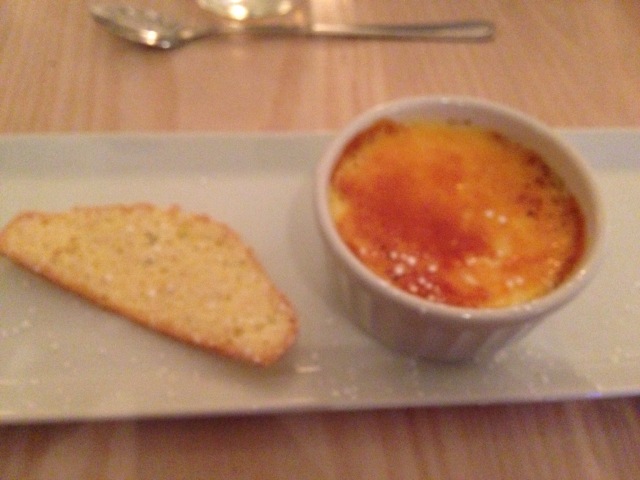 Most people at the table had the brownies. Everyone said they were delicious.

They certainly looked divine. Both the creme brûlée and the brownie desserts were R60 each.

All in all mine and Norman’s dinner came to R400 including tip.

We all chatted and laughed til late and then everyone headed off and Norm and I toddled off to Hout Bay.

Saturday I was happy to just chill so I got up and showered and got dressed in clean PJs and settled in for a day of doing nothing. My friend Retha popped by to show me her new Mercedes. It’s like a space ship inside.

We watched 2 movies. We watched The DUFF which we only watched because Caitlin rented it. It was so cute and funny. It has Mae Whitman from Parenthood and the insane Ken Jeong. We laughed a lot.

Then that evening we watched Focus with Will Smith and the jaw droppingly beautiful Margot Robbie. It was mediocre. The last few movies I’ve seen with Will in them have been mediocre. Sad as I like him a lot. Hope he isn’t just chasing the dollar.

Anyway my Saturday was lovely and lazy. I did make dinner, that is I piled things on a plate, some I bought at Spar. We had pies, steak for Norm and I and spinach and feta for Caitlin. I baked potatoes, heated some beans and fried some zucchini spears. Caitlin breaded them all so I just did the cooking.

It was a nice winter dinner.

Sunday I hit Blue Route Mall as I badly need jeans. I managed to find everything I needed at Fashion Express. I got 2 pair of skinny jeans, 1 blue and 1 black and 3 tops.

I was so chuffed! I’m a curvy girl (aka a bit fat) so that never happens.

I was starving so popped by Mugg & Bean in the mall and ordered a sandwich.

I ordered the backyard BBQ pretzel.

The word “BBQ” beef to me was going to be the US Version, but it was just overdone steak drenched in BBQ sauce. The menu version is above.

Mine was less meaty.

But it was tasty enough.

This week is just as busy at work as always. Last night I got home late and we had no food in the house it seemed. We did have eggs, milk, onions and cheese as well as potatoes so I started cooking the potatoes southern style as Caitlin had done a shop and brought home mushrooms, tomatoes and bacon to accompany it. We had a yummy cheesy omelette, bacon, mushrooms, crispy fried potatoes, little Roma tomatoes all piled up, I sat down and had a single bite and managed to spill almost my entire plate down my pajama legs and into my slippers and all over the floor.

I saved enough for my dinner and Norm kindly gave me his omelette so it wasn’t too bad. I did miss those mushrooms fried in butter which all bit the dust.

I’m off to watch some rubbish telly, enjoy your evening everyone.