This week one of my favourite colleagues left the company, we have worked together since he joined a project I was on at Media24, and we have recently been on a Data Migration project for a telco project.

In honour of his departure a few of us went to La Boheme in Sea Point for dinner. I had never been but had heard good things so I was looking forward to it.

It was a beautiful warm evening and we sat outside.

They have a wine list, but other than that the menus are all on blackboards- they change the menus frequently while keeping some signature dishes on regular rotation.

We ordered a bottle of my fave Professor Black Sauvignon Blanc from The Warwick Estate and studied the board. I didn’t take a snap that evening so I nicked this online. The price is outdated, I think it is now R140 for 2 courses and R160 for 3. A bargain!

I chose Eisbein Risotto Balls for my starter. It was really delicious. The risotto balls perfectly crispy, the risotto creamy and soft and with a deep smoky flavour of the Eisbein coming through. It had a pesto dressing which was on the side, I was glad to see that as pesto is not my fave but this was mild and not overwhelming. A nice accompaniment to the rich risotto. It had tangy baby tomatoes and the acidity of them was a nice balance.

One of my friends had the grilled halloumi salad, he enjoyed it and it did look delish.

For my main I had one of their most popular dishes, the pork belly.

It was not too fatty which is one reason I’m hesitant to order it usually, but I love pork. I wasn’t disappointed! It came piled on a huge plate of beautiful, creamy garlic mash with wilted spinach, green beans and shallots and some perfectly cooked bits of crackling. Wow. It was just divine! The crackling was crispy yet not tough, the meat moist but not too fatty, the mash plentiful and they were generous with the sauce. I would recommend this to any pork lover.

For dessert I had the creme brûlée which is one of my fave desserts.

The topping was hard as it should be, however it was a bit thick for my liking. The creme brûlée was creamy and slightly flavored with vanilla. It wasn’t the best I’ve ever had but it was a perfect consistency. I prefer more custard like flavour than the very ‘cream’ like, but I’m not a cream fan. But I would still give it an 8 out of ten.

Several of my friends had the cheesecake and it went down a treat! It was a proper baked cheesecake. 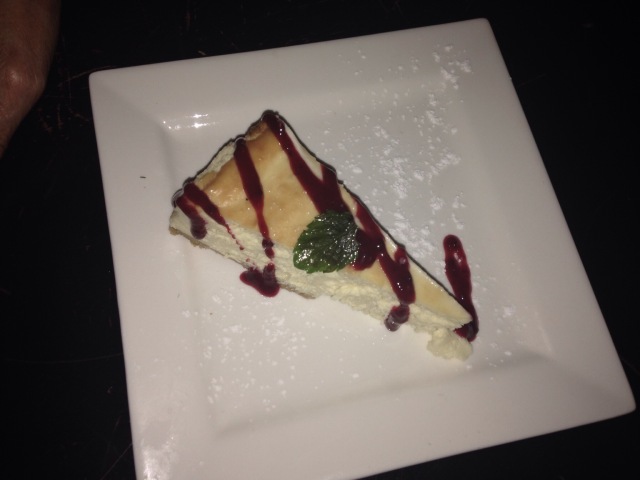 My friend who is a diabetic and a Banting fan had the cheese platter, this also looked divine!

It had olives and tapenade as well as a wide variety of tidbits.

We had a lovely evening and in true bistro style it was noisy, vibey and full of great energy. I didn’t have to worry about being too loud or muzzling my swearing.

The next day I felt the Professor thumping behind my eyeballs but I soldiered on 😉. I had an appointment after work with a new therapist called David King who does Body Reactivating Technique. I had never tried it, but I had a moment on Monday when I felt like I might implode from stress. Since Saturday evenings drama I had felt like I was stuck in overdrive. As soon as I made the decision to go for help my friend Emma popped into my head and once she was in there she wouldn’t go away. So I did the footwork (or finger work by messenging her) and asked her for a suggestion of someone to see and she pointed me towards David.

He is based in the Wellness Center at the The Watershed at the V & A a light and airy building with various craftsmen offering their wares, food stalls and several health practitioners all sharing the space. While I was waiting for my appointment there was a group of men who sang Ladysmith Black Mambazo style acapella and their voices resonated throughout the building. It was fabulous.

The treatment was simple, I lay on the massage bed on my tummy and David poked about. He would then gauge what was needed to balance my body then he came up and pushed, prodded and poked me. I turned over and he did a repeat of the process. He threw in a bit of kinesiology as well. The trigger words were ‘anxiety’ and ‘fear’. Spot on, dude, spot on! David said my adrenal gland was blocked, which could explain the reason for the anxiety. It was quick, maybe half an hour. When I sat up my head spun like I had just gotten off a tilt-a-whirl. I actually felt high. My tensions were gone. I felt so straight and tall. I felt so serene I took a slow stroll around for a bit drinking in the vibe of the waterfront while waiting to get my feet back down to earth and then drove home. I decided to go home round Grainger Bay and I sat gazing at the clouds and the sea as if for the first time. I have never been so relaxed without medication.

The next morning I was very stiff and sore but still relaxed. I have another appointment to see David on Monday, this is going to become part of my monthly routine.

Last night we had our 2nd Hout Bay Women’s Gin Club meeting. It was held at one of my fave venues The Riverway Cafe which is owned by the clever and talented Julie Ragavelas. True to form she totally wowed us all.

There was a table set up with vodka and gins, various mixers and a dispenser filled with homemade lemonade. We chose our poison and paid into the honesty jar for the mixers as the booze was sponsored. 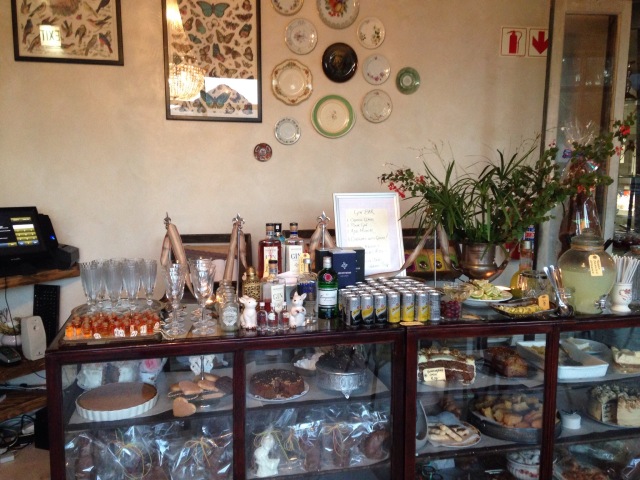 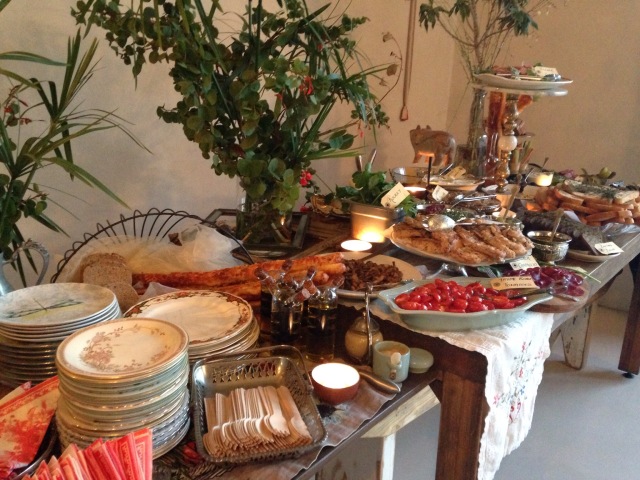 The little details were just so charming. These little shots of gin and tea cocktails were divine. 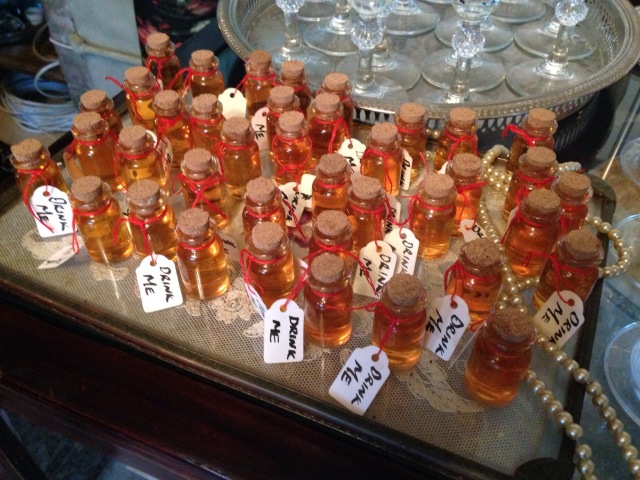 I felt like Alice down the rabbit hole.  There were also some wonderful gin jelly cubes which had been made by Cheyne’s brilliant chef.

The Gin Club is not only about alcohol consumption although I certainly consumed a few of those jelly cubes. The purpose is to have a support group of women, with an aim to raise awareness of various local charitable causes and local areas of need.

We all grabbed a plate full of food and settled in. I joined a couple of women I didn’t know and then my friends Linda and Lynne joined our table.

We then sat listening to a little talk about Chic Mamas Do Care a secondhand clothing charity shop which donates all of their proceeds to local causes. They donated R10,000 to the Moravian School which has over a thousand students and no library at all. This donation has resulted in shelves of books for the children. (As well as actual shelves to store them). Chloe, one of the lovely teachers there gave a talk at last months event but I was late and missed it, but she got us off to a great start as she touched many hearts with her appeal.

The staff last night were brilliant. After the talk finished they cranked up the music and danced about. They rotated with jelly cubes, shots, wine and snacks. Eventually there were a handful of die hards left and Julie treated us all to a slice of her amazing melk tart.

We all sat outside chatting by candle light. It was such a lovely warm energy full of female comraderie. Just a wonderful night.

We all toddled off eventually much to the exhausted Julie’s relief I’m sure. She has set the bar high for these evenings!

Next month we are being hosted by Massimo’s in Oakhurst. It’s a very popular venue so I’m sure we will be wowed once again and very spoiled.

I’m really happy we have this forum, it can lead to great things in our little village. Because as you know, women can work miracles.