I was lucky to have 3 lunch dates this week! My financial investments guy popped by to update me on things on Monday, Thursday my friend Di was in town dropping off her Cushi’s at Spree. She messaged me and I popped down to meet her, then Norm messaged me Friday to say he was in town and could he take me for lunch. I felt very spoiled! It makes the day so much more bearable to get out of that office. We have a wee cafe right round the corner and I can pop out, eat and be back at my desk in half an hour so it is perfect.

Friday I had been told to be on stand by that evening as we were doing a data load and as the BA I have to do the testing. Luckily the team got the data to me early and I had a bit of help from the other BA and managed to get away just after 5. As we are not extracting we shouldn’t be working over but I’m not the lead or PM so not my circus…I am just the monkey,

Norm and I had an evening on our own as the girls were out but as we were both tired we ordered in take aways from Spiro’s and just chilled out watching nonsense on Telly and playing on our iPads. The animals were happy to have us home. It’s cosy staying in with my hubs.

We had decided to hit the Ford and the Nissan dealers on Saturday morning so we hopped out of bed and headed off to town. 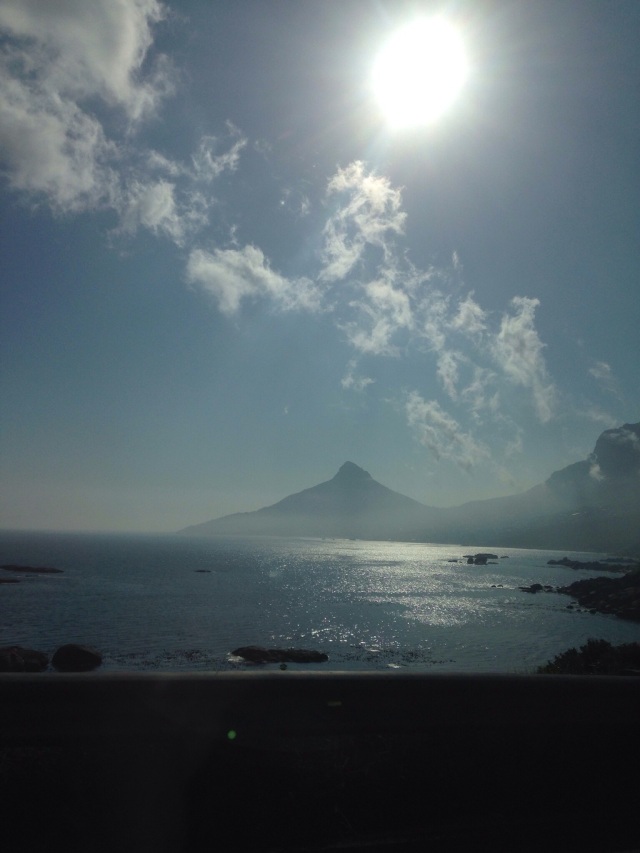 We stopped at Jason’s Bakery for a takeaway chocolate croissant for our breakfast and went to the Nissan dealer to check out the Juke. They have one in the range I want but it’s a manual. I want an automatic. I’ve always had a manual, but going up and down mountains is doing my head in. I wanna cruise and not shift! They put my lovely lil Peugeot onto the racks to check her out, and took down the info on what I want. They will email me the details of the deal they are willing to make. We then ended up surrounded by protesters on a march. Apparently there were about 3k people there, it was quite intimidating but the vibe was non-violent, just intense. It was the march in support of Palestine, ‘United For Gaza’. 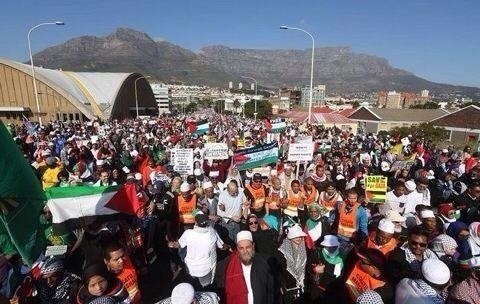 We then managed to take a back road to get to the Ford dealer. He had a nice lower range of car on the court in the colour I want, dark grey.. But it’s a bit basic. The Juke feels fancier but it’s lots more expensive.

Here’s a nice vid showing both.

By now the march was trailing off. 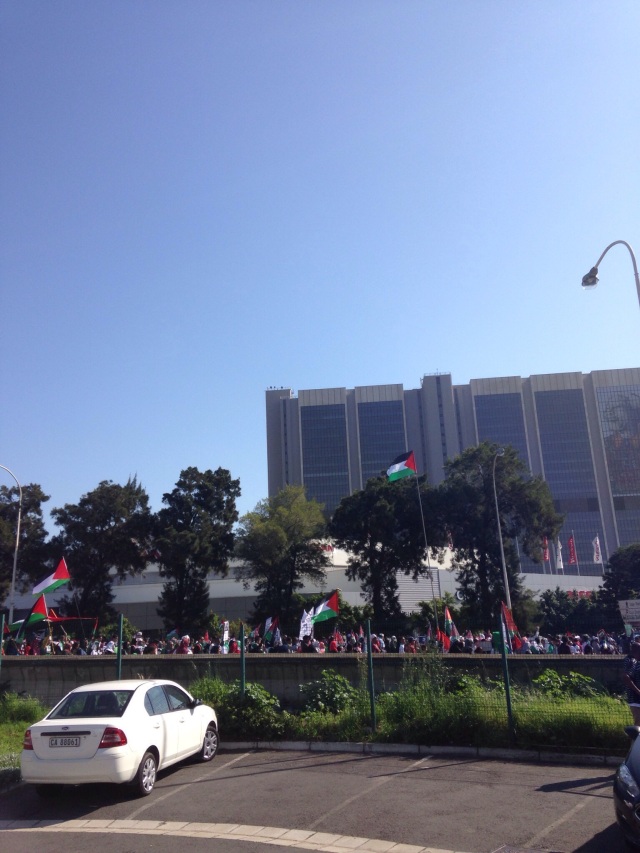 The salesman seemed to steer me off the idea of an automatic, the fact the Ford Ecosports have a 2-7 month waiting list pretty much knocked them out the running. I like the look of the juke I must say. Very sporty.

We had a few random bits we needed so stopped off and did some shopping at Constantia Village. While there I saw a woman shop lifting in Pic n Pay.. I told the manager who kept an eye on her but ultimately she left without being approached by anyone. Nice. We all pay the price of her theft,

We then decided to stop for a sandwich on our way out of the shops as it was late afternoon. A new place has opened, or else the old place freshened itself up. But the menu is also new and I don’t remember the name ‘Tiffany’s’. It’s cream and turquoise, my favorite colours.

I suspect they called it Tiffany’s just so they could say ‘Breakfast at Tiffany’s’ on the menu. 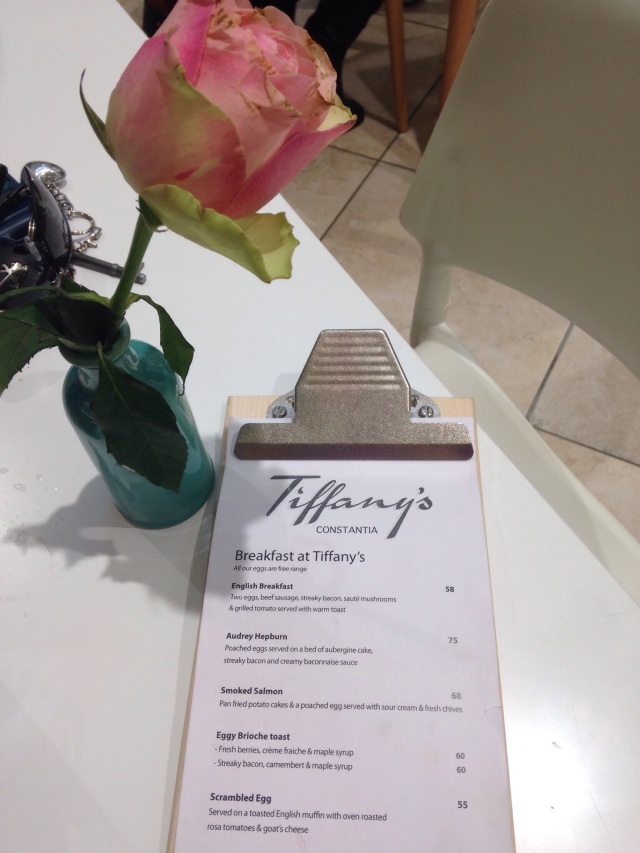 We ordered a coffee and a soft drink and they took ages to arrive. We ordered sandwiches and fries and then waited about another 40 minutes for those to arrive. Mine was minus fries. So off she went to get more. I had ordered a roast beef wrap only to be told they stopped doing wraps as they kept tearing. Okayyyyy. I ordered it on a baguette and as it was so simple I was surprised it took so long.

It was overwhelmingly coated in huge blobs of pesto. I didn’t notice it had pesto written in the description or I would have asked for it without. It wasn’t nice, but then I detest pesto. The meat was gorgeous however – tender and pink. It was great. The bread was fresh. But overall I would not recommend this place. The function of a shopping mall cafe is to stop, eat, shop, go. You don’t want to linger for an hour to get a basic sandwich. 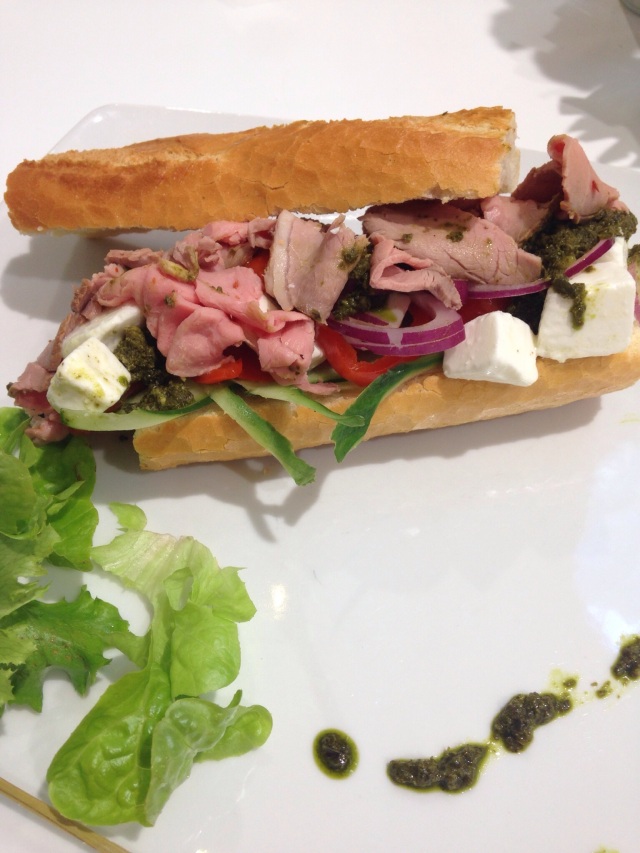 We decided to do date night Saturday night and booked at our fave burger joint Ragafellow’s. We stopped on the way to order pizzas for Norms volunteers and Norm went in to order but when he came outside to get his phone the phone started to ring. It was Caitlin saying the prepaid electricity had just ran out. I tried talking her through logging onto my iPad, realised there was no wifi then realised I had left my phone charging at home, so talked her through that. But we had a crapberry bad connection and I could barely hear her. So we kept losing connection. It was impossible. We agreed to go and get a voucher at the shop and after he sorted the pizza order we shot off to the shop, got a voucher and sent the number for her to enter.

Crisis over we went off to Ragafellows, by now we were about 25 minutes late for our booking. But as we are regulars we assumed we would get a call if there was an issue. We walked in to be told that our table had been given away. We were so looking forward to a bit of stress free relaxing this was the last thing we needed. But the chefs wife was the host on duty and she made a plan and made up a table, but it was right by her desk and the door so she promised to move us when possible. We ordered and started on our cocktail and wine and then a table opened up.

We moved to a lovely corner for our usual starter of fish croquettes and crispy calamari. Gorgeous as always. 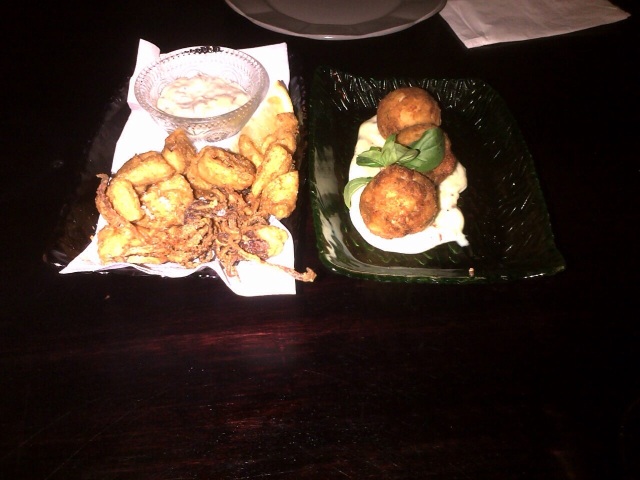 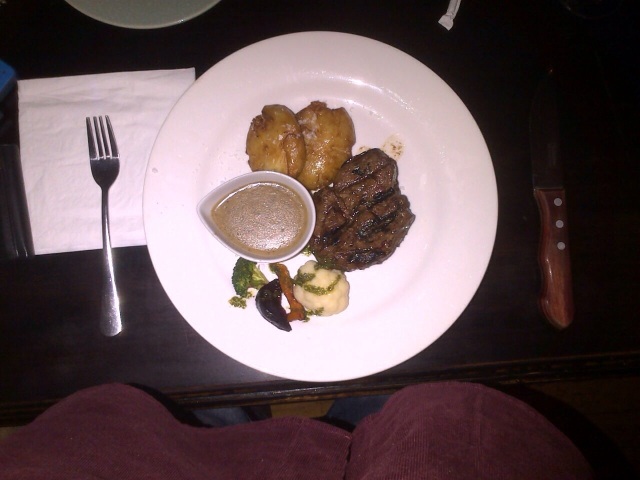 Mine was perfectly cooked and incredibly tender. A beautiful consistency. I liked that it comes with a sauce in a cute wee bowl. Comparing this in price to Peddlar’s On The Bend for example, where the fillet is R165 for a 280g, plus an additional R19 for a sauce, the value to me is clearly better at Ragafellows. For us the additional value is it’s closer. And owned by wonderful people. So tick, tick tick of the boxes!

We skipped dessert and stopped off for Magnum bars for ourselves and Caitlin. We came home and relaxed.

Today we were booked into Quentin’s at the Oakhurst Barn. We have tried to get there 3 times, the 1st my friends car was broken into, the next my other friend couldn’t make it, then we were unavailable. Finally today we made it, but almost didn’t as we were greeted at the door by Quentin who looked at his clipboard and said we had only booked for 3. We told him we had booked for 6, but my daughter wasn’t with us so it would be 5. He seemed a bit panicky and said they were booked solid. A waiter came up who checked the list and said we were indeed booked for 6 people. Phew. Glad someone knew what was going on! We were seated and our friends arrived soon after. It was great to see them, it’s been ages since I saw Caroline.

The Sunday lunch is a carvery. 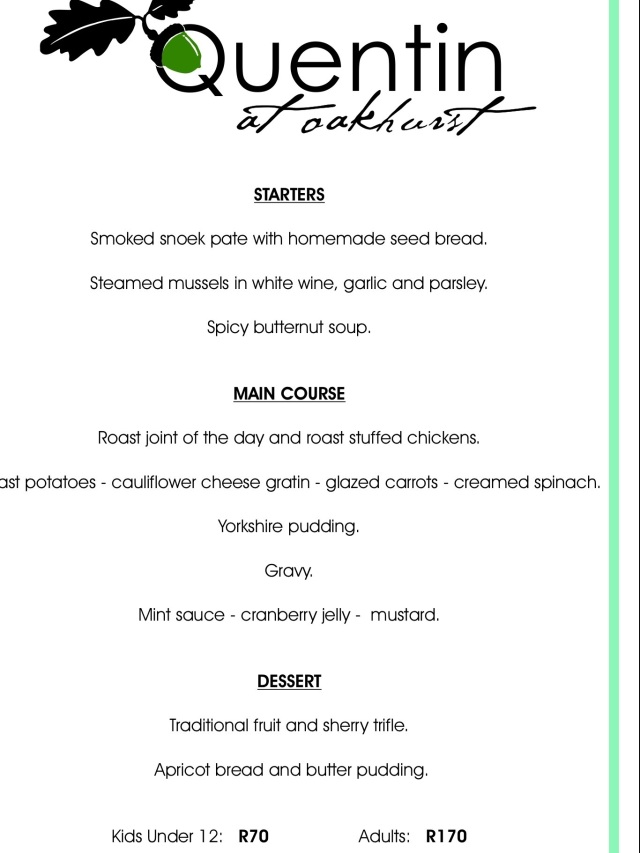 I chose the mussels and they were nice. I could have eaten twice as many as I had but they were tender, not chewy and the sauce was really nice. The bread was heavy and warm and delicious. It almost had a slightly sweet element and we smothered it with the slabs of room temperature butter from a dish on the table. It’s so pleasant to not have frozen butter ripping your bread to shreds so well done on that one whether intentional or just luck of having such a beautiful stunning winters day.

For main it’s all set out on a table and you go up and serve yourself or they serve some things. There is a roast of the day, today was a tender, perfectly cooked beef roast and roast chicken complete with a nice sagey stuffing. As sides there is big fluffy Yorkshire puddings, roast potatoes, roast sweet potato, creamed spinach, peas and carrots and a delicious rich gravy to top it off. The menu said cauliflower cheese but there was none when we went up. It was all perfectly cooked, the portions ok, I would have liked a bit more meat however. The other issue was that it was a bit tepid in temperature by the time you shuffle along the queue and get seated. Personally I would have people stay seated and let them choose the starter and dessert and just serve people consistent plates of food at their table. More like the Sunday roast at Treetops at Silvermist I liked that set up.

But the food was nicely seasoned and well cooked. 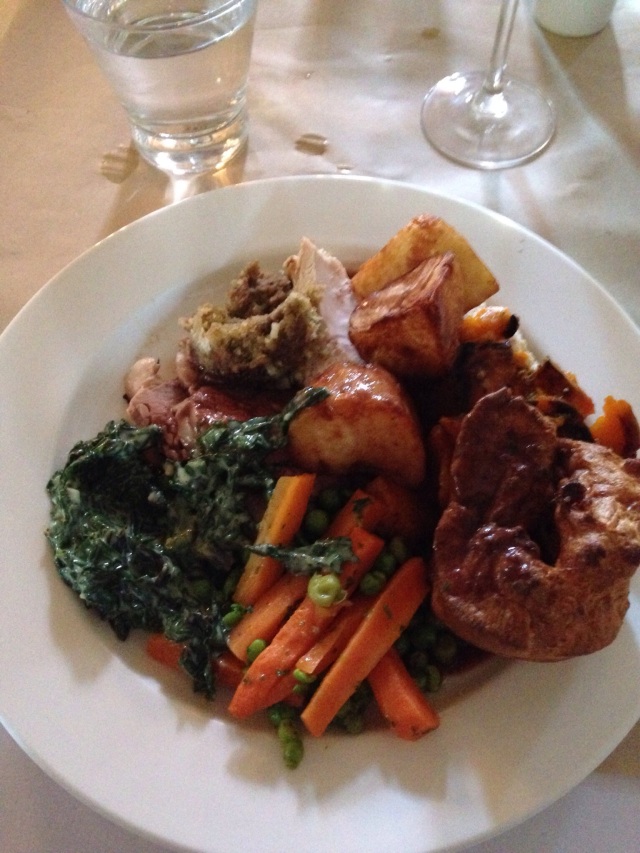 You went up to queue 3 times, once for each course. So up we went for dessert.

I detest trifle so I chose bread and butter pudding and thank you baby Jesus it didn’t have raisins. Raisins are the work of the devil. Who was the first person who was so hungry they said ‘I’ll just eat these grapes which have dried in the sun to a hard withered tick like object’. Yum. Makes me shiver.

The bread pudding was slightly burnt and black on the edges and there wasn’t much custard on the go for me but they topped up by the time Norm was being served so I have taken the blog pic of his, it looked more appealing. It tasted ok, but the burnt bits were too hard to crack with a spoon, 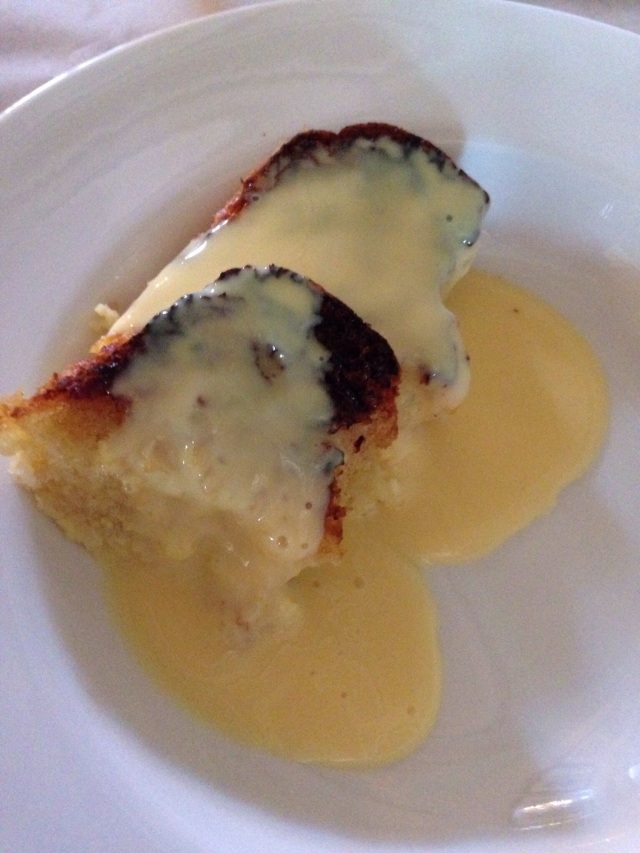 I thought it needed a bit more flavour. As Norm sad it was more bread than pudding.

Anyway I will go back on an evening so I can try ala carte as I saw scallops which are my fave thing. I liked the decor it is stunning.

I had a great weekend and I’m trying to be positive on the work front that something shifts there. I’m sending out my cv and hoping for a bite soon. Hopefully this week I will buy a new car. I’m feeling ready for change.

2 thoughts on “Breakfast at Tiffany’s”