Friday night and I’m sitting mostly in the dark, the room beautifully lit by candlelight everything looking soft. It’s pouring rain outside and has been raining sheets of water since this afternoon. The entire road is underwater, so much so that I had to leave my car in the city as I’ve just had new brakes fitted and I am a bit like Bambi on ice when trying to stop. Retha drives a big solid Mercedes and she drove us home as it wasn’t safe for me.

Here is a pic I blatantly stole from a Facebook group, photo credit goes to Charles Mercer. This looks like a waterside venue, but it is a street normally, not a river. 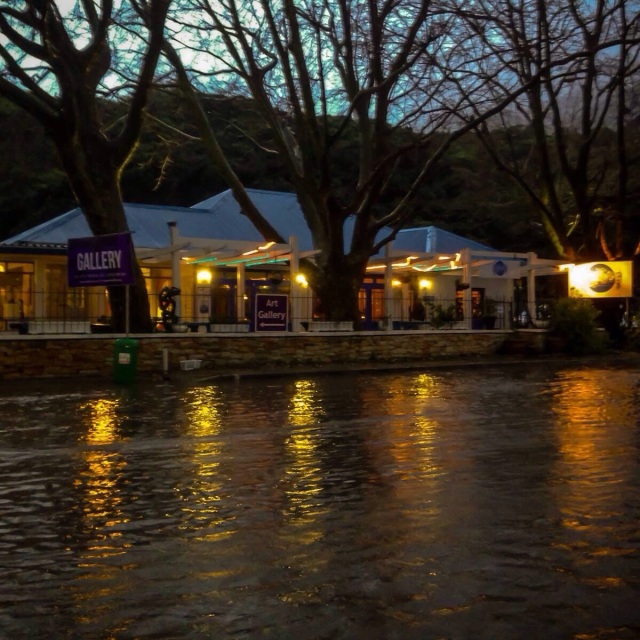 The power went at about 11am Friday while I was at work and has been off since then, so 12 hours when writing this. I won’t be able to post until the electric gets the wifi going. Norm went to our fave Cassarechio for takeouts. I wasn’t very hungry as Retha, Emma and I had been to The Mount Nelson Hotel for High Tea.

I hadn’t been to the Mount Nelson in ages. It’s been around forever. The first time I went was about 1993 or so. I had just received my divorce papers after a very messy divorce. I was living in a log cabin on the lagoon in Knysna and working as a waitress in a cocktail bar…well a pub but I was channelling The Human League for a minute…it was called Crabs Creek. A fellow waitress and good friend and I went down to Cape Town. Me to mark the occasion of my freedom. Her to meet up with her sugar daddy. I now realise he was probably about 60 this sugar daddy, but to me back then he seemed positively geriatric. My friend looked a bit like Mae West and Dolly Parton had a better endowed baby. And then that baby grew up and spent all day rolling around saucily in a barn full of hay. But she was a lot of fun and up for anything. So we were treated by sugar daddy and had high tea and about a dozen bottles of very expensive champagne and then toddled off down Long Street, bought a bottle of tequila and went off to get a tattoo. I got a butterfly on my hip to signify my metamorphosis from repression to freedom and chose a swallowtail because that’s the national butterfly of my home state where I grew up. My friend got a fairy. Fairies were all the rage then. Anyway…..I totally digress.

I had thought I would be clever and park on the street by my office on Friday as it was supposed to rain. I had washed my hair and actually dried it for a change as I wanted to look nice for our tea. But I forgot both my umbrella and my jacket in the car as it was still dry when I walked into work. When I walked out it was into thick sheets of water. I was drenched to the bone by the time I jogged to my car even though it was just across the courtyard. I drove to Mount Nelson and didn’t realise I could use the valet parking if I wasn’t staying there and I had to get my umbrella out of the boot so again, more water. My hair went on the fritz as you can see below.

The tea was served in clear glass infusion type pot and they ask you to leave it for 3-5 minutes to brew. Then they bring a tier of savoury items – all manner of lovely finger sandwiches, tarts, cheese puffs and sausage rolls. Nice thin slivers of salmon and creamed cheese, rare tender roast beef and veggie wraps. All ever so delicate and dainty. 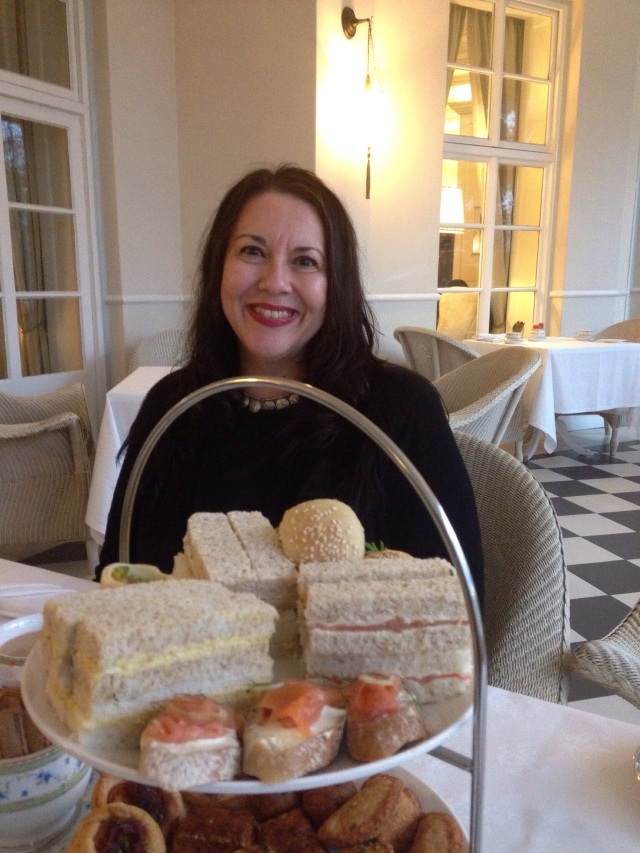 We had our fill of savoury items then went off to the desserts table. It was so beautifully laid out and the flowers were breathtaking. It was so difficult to choose what to have! 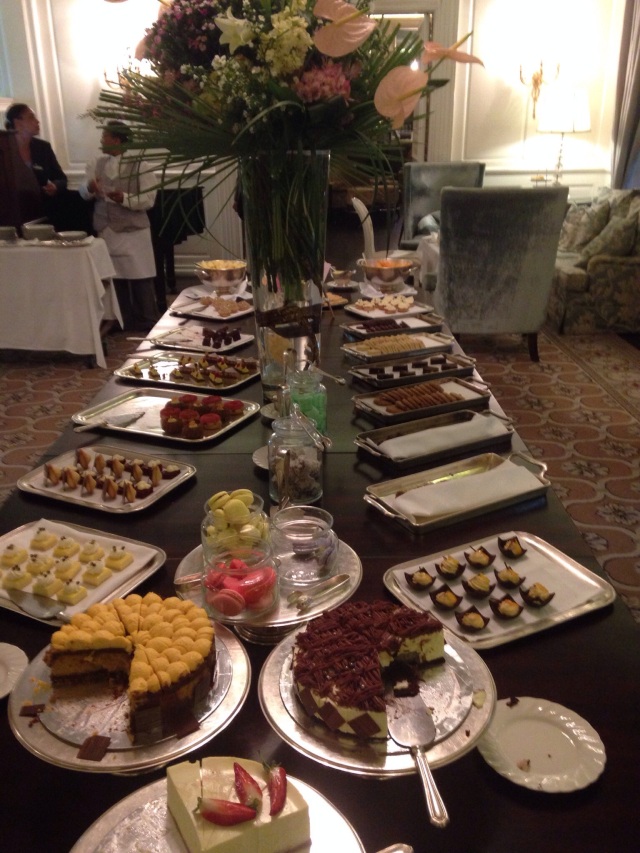 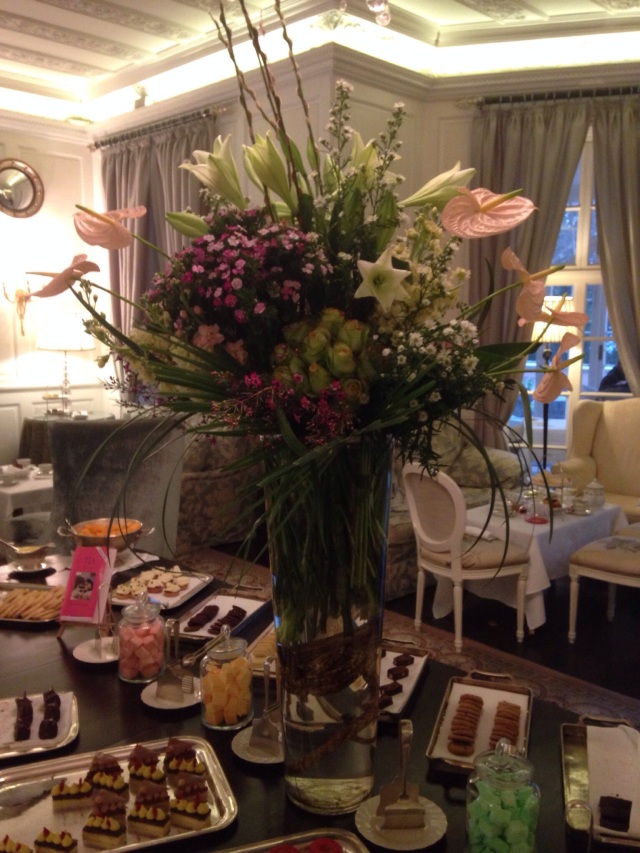 Emma, Retha and I all got on so well we all babbled away, interrupting each other, stopping and starting in a rhythm that only old friends can usually achieve. Retha and I clicked the 1st time we met, we are both tech industry geeky girls who love attending events and have a bit of a hippie spiritual side. And we make each other laugh. A lot! So it was cool that Emma just fit right into that pace.

As for the service it was as per any restaurant of that caliber, it wasn’t overbearing. There was always someone nearby you could signal but you didn’t think them annoying or obtrusive. The table setting was stunning little florals. The food was very attractive, especially the pastries and desserts. They were all very delicate and beautiful but it was all so much to choose from and none of it had descriptions. You couldn’t possibly try everything so it would be nice if there were little labels at least giving the names. I tried a lemony light creamy cheesecake, a bite of red velvet cake, a pink macaron, a strange thing I didn’t like as it tasted of passion fruit and a rich dark chocolate roulade thingy.

I sampled quite a few of the items on offer, but my fave hands down was the triangular peanut butter and chocolate one. 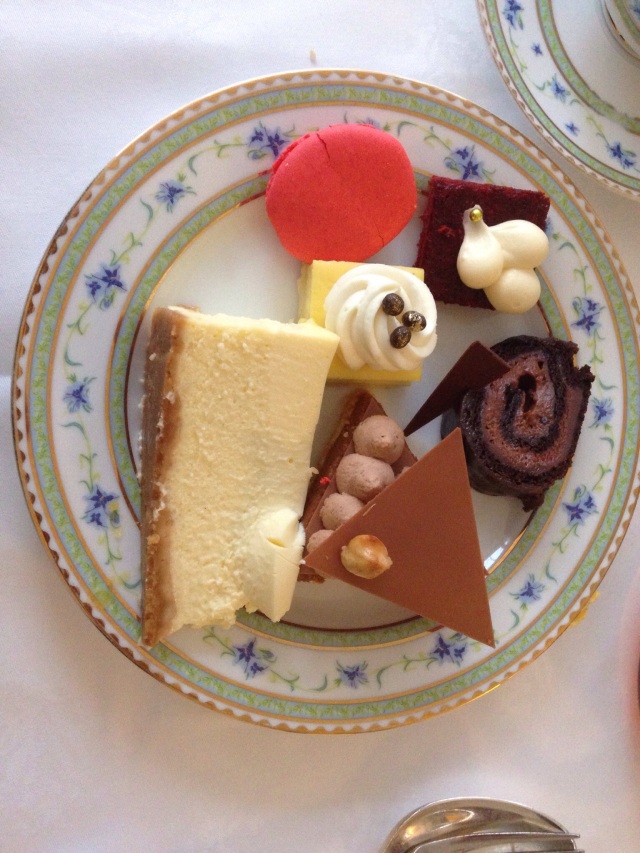 Retha negotiated the torrential rain to get us all home safely and I settled in with Norm and the pups in the candlelight.

Saturday night:
It’s now 25 hours since the electricity failed and people are working on resolving it. These issues are due to the contractors who are building a path from the township to the school and putting in streetlights along the main road (yes our village has no street lights as ‘they’ do not want to spoil the village feel. If that’s the case ‘they’ should deal with the crime which I feel is exacerbated by the lack of lighting). The downpour has caused the new work to blow one of the supply thingies. (Switches? Boxes? Who knows).

Last night we didn’t mind too much as we chatted by candlelight and played silly games like ‘I spy’. Even that went a bit off kilter as things often do with us.

We argued. It went like this.
Norm: ‘I spy something beginning with ‘R”
Lisa guesses every single thing in the room then gives up while scratching head in confusion. ‘What is it then’ she asks.
Norm: a ‘red vase’
Lisa: ‘YOU DONT PLAY LIKE THAT U SILLY SCOTSMAN, you say ‘V’ for vase, not the colour! Ok it’s my turn and you play like this, I spy with my little eye something beginning with ‘P”
Norm: quick as a shot ‘painting’
Lisa: ‘yes, you suck I quit’
And that was that.

It was too dark for board games so we had limited options. This morning we spent all morning in bed as we couldn’t even make a coffee so why bother getting up as it was freezing cold. (Some advantages to no electricity *wink wink*.)

But as it is our 17th wedding anniversary it’s kinda messed up our plans. Here is the obligatory pic of us at our wedding. My daughters put the frame on so apologies for that! Haha. 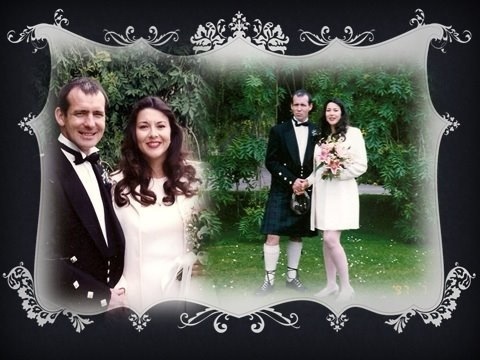 Sunday:
The electricity finally came on after 36 hours. We were due to go out to Cheyne’s on Saturday night to mark our 17th anniversary but we had no hot water and the alarm battery was flat so we couldn’t leave the house unattended and had to cancel. I was rather gutted about not being able to go out, but Norm spent the evening chasing people to close their electric gates and various other issues triggered by the electricity fault. He even flushed a criminal out of the bushes behind a neighbour’s place. My little Scottish Chuck Norris.

The dogs were cooperative this morning so we had a long lie in as it was so freezing cold. It actually snowed on Saturday night. People even attempted snow men. Bless. 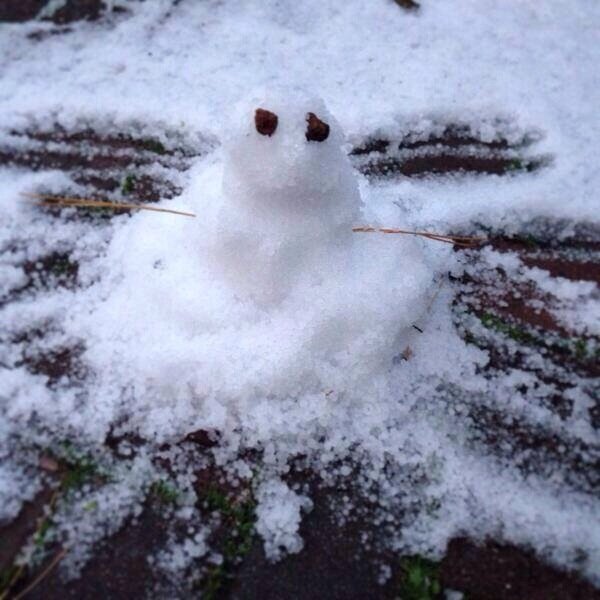 We then headed off to Ragafellows for a late anniversary celebration. 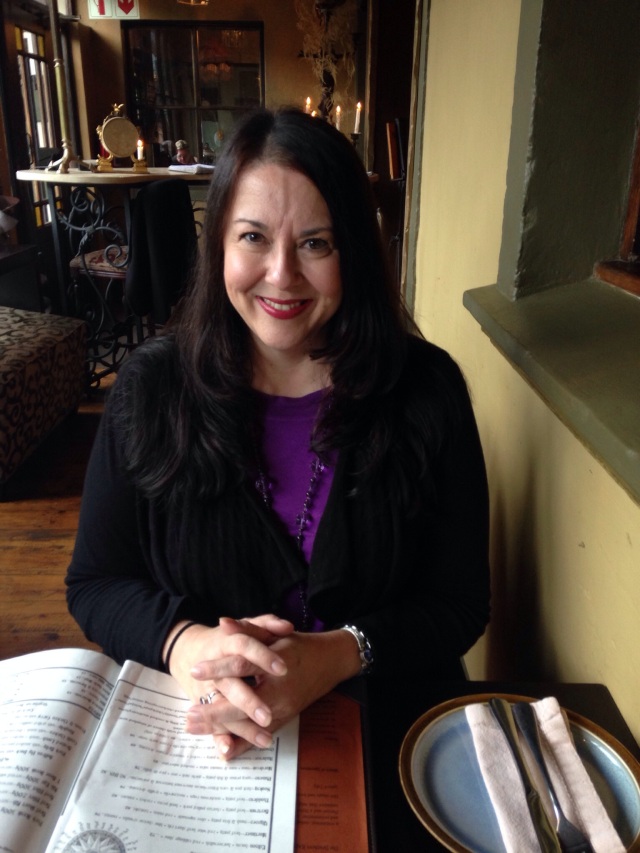 We had a delicious meal and we were then treated to a complimentary dessert complete with sparkler. 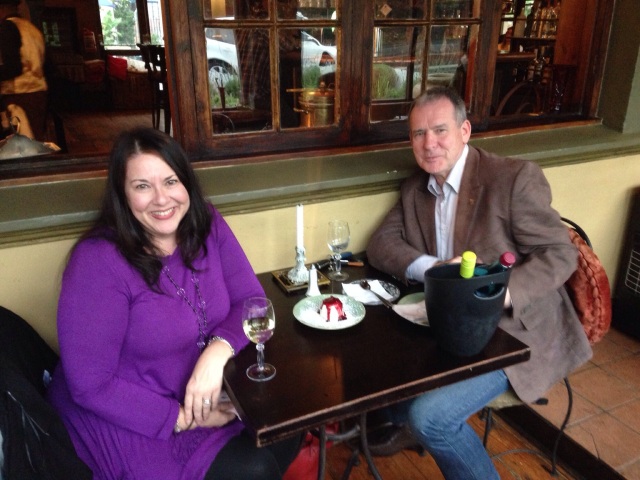 It has definitely been the oddest anniversary I’ve ever had, but it was spent with the man I love, we were dry and relatively warm and we coped. The weekend had a fabulous start and a great ending, the middle was all over the place but when has my life ever been smooth sailing!?
>