When I posted my blog earlier in the week, I had completely neglected to mention the drama we had that morning. We were woken by the phone at 7am, it was our neighbour across the street who asked us about the car parked outside our gate. She drives a big van and sometimes struggles to get it turned out of her gate so assumed she was phoning to ask us to move it. But then she told me that someone was in the process of trying to break into it.

Norm was out of bed in a heartbeat, he threw open our upstairs balcony door and started shouting out toward the street. By the time he got dressed and out the crackhead had ran away. (I call him a crackhead, but in reality he is most likely addicted to tik – or methamphetamine as it is known by its proper name.)

I find it interesting that when I wrote my last post I just did not even think to mention this event – I take this to mean that I am no longer worked up about the drama of everyday life in Hout Bay now. I am getting so used to Norman being out with the Neighbourhood Watch it is now commonplace!

The rest of the week passed in a blur and then it was Friday again. We had booked to go to Don Pedro in Woodstock. The reason I wanted to go was because they usually have brilliant entertainment but for some reason there was nothing happening when we went on Friday? Maybe it is only on certain nights, but either way I was a bit disappointed.

We all decided what we wanted to order, and while ordering we mentioned that 3 of us were having the fillet steak, but we did not like rosemary and wanted it to be left off or else served on the side. 2 others in our group are allergic to garlic, so we had a few issues with that. At one point the waitress had gone to ask the chef what was garlic free and then came to tell my friends that virtually everything has garlic as it is a French themed restaurant. I loved my friend’s comeback – she told them that she had spent a lot of time in France and she managed to survive that, so if France could cater for her she was sure this little restaurant could.

The waitress then told me that the sauce already has the rosemary in it, so they cannot leave it out. I then said, but it is a sauce? Just serve the sauce on the side?! (I really really really hate rosemary.)

If I was a person who earned my money based on the size of the bill at the end of the night, I would have done all possible to get the 3 orders of fillet steak (at R140 per plate) instead of any other dish on the menu which were averaged about R75. A bit of a no brainer.

The wine was served and it was warm. We had to ask for ice cubes, I really hate putting ice into a nice glass of wine, but I also cannot drink warm wine.

The kids and I shared some starters – we had chilli poppers, nachos and salt and pepper squid. The chilli poppers were very nice, the batter stayed intact, the pepper was still crispy and they were top notch. The nachos were average – the biggest issue to me as a Yank is when restaurants use chips which are flavoured. That is so wrong!
The salt and pepper squid was divine however! It was so light and soft – it just melted in your mouth.

The main was the previously debated fillet steak. 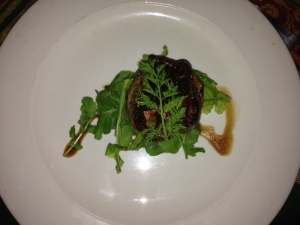 It was very tender, perfectly cooked and the side veggies were really good – to the point that we were almost fighting over the cauliflower and cheese sauce. There was spinach, crushed new potatoes and cauliflower cheese. Very delicious! The chef even sent out some mushroom sauce for our steaks to replace the rosemary jus. (that even sounds pretentious haha)

The dessert I picksd was the creme brûlée which was one of the best I’ve ever eaten, so creamy and rich, vanilla flavored and with a perfect topping.

The celebratory candle was a nice touch.

It was very dark in the venue so I did not take many pics of the food. We did however get a pic taken by the roaming photographer on site. Not sure why he dressed us up, but the warm wine had taken effect by now and we were agreeable.

All in all we had a pleasant evening, we had a lot of laughs and great conversation. (And hopefully no one spat in our food :O )