Our project had a go live this week so I worked a lot of overtime. By Friday I was exhausted and luckily finished early. The weather has been glorious so I snuggled up in my sunny bedroom and had a snooze in the sun.

Norm went out to get sushi for Lily and I and we just had a chilled out night at home watching movies. I needed the down time and it was good to spend time with Lily as she had been away most of the week.

Saturday we had made an appointment to go and meet the breeder of Swiss Shepherds I had been chatting to online. It was in the northern suburbs so off we went with Pixie and Panda in tow. We were planning on buying one of the new litter of only 2 weeks in age, but we met a gorgeous little boy of 11 weeks, Ivanhoe. She had him for breeding purposes so she wasn’t willing to sale him. But we hit it off so well she offered him to us, with a clause for us allowing her to use him for breeding. She wants to preserve his bloodline as he is highly intelligent. She plays all sorts of games with the pups to test their intelligence and nature. So he is going to be our dog. How cute is he? We have decided to name him Navajo in honour of our Native American heritage and to keep the name similar to what he is used to.

He will grow to be huge. We will have him go for extensive training. We can’t have a dog that size with manners as bad as our Pomeranians or it will be unmanageable. I can’t wait for him to come live with us. We just need to get the bits and pieces sorted then we will collect him this week.

After our morning with the dog we headed back to Hout Bay. We dropped the gardener off at home and went to our new local pub The Woodcutters Arms for a late lunch / early dinner.

We sat outside in the beer garden as it was a lovely day. We decided to have a proper meal and let that be our only meal of the day, so we both had starters. Norm had the scotch eggs which I did not fancy at all as I am not a fan of sausage. But he seemed to enjoy them 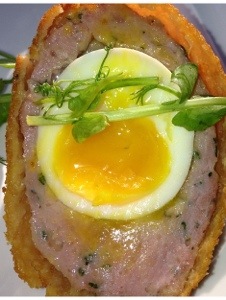 I had the warm Camembert which was served with a large bit of French stick and some berries which I think were cranberries. They had a lot of orangey marmalade taste but also a heavy taste of cloves, one of my most hated tastes. Blah. So I had the heavy rich cheese just with the bread and I found that a bit much. It needed the fruit to lift it.

For my main I had the chicken which came with mash and spinach. The sauce as very rich and tasty, slightly salty for my taste but all in all it was yummy. The mash was lovely and creamy and the spinach was delicious. I love spinach. The dish certainly was a standard above what I would call ‘pub grub’.

We stayed there til sundown and then it got a bit chilly outside so we headed home. Saturday evening we had a family night at home.

Sunday Norm’s colleague arrived in Cape Town and we were all invited out for breakfast at Bistro Sixteen82, we had eaten lunch there before but not breakfast.

There were 8 of us and we opted to sit outside as it was a stunning morning. 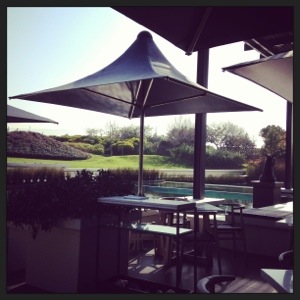 The menu is limited, only a handful of choices. Norman and I both opted for the Eggs Benedict, my fave breakfast choice. It came with pork belly bacon which sounded interesting and it tasted divine! I cut off the fat and it tasted like a tender gammon. The hollandaise was perfect, not overwhelmingly lemony or tart. It came on a crispy rosti and with grilled sliced rosa tomatoes.

We had several cappuccinos and lots of chat. We were a very cosmopolitan group: Scottish, English, American, Australian and several South Africans of Indian descent. We had a lovely morning and then Norm had to deal with his visitors so I am happy to just relax the rest of the afternoon. This week is a 4 day week so that will be a nice change. I hope you had a great weekend too!