On Monday I arrived home to find my entire house coated in a thick layer of dust.

Every bit of it. Even my bedroom upstairs.

I think I may have brought it on myself. Look at me asking the fairies for dust in my last blog. Fairies have a naughty sense of humour. 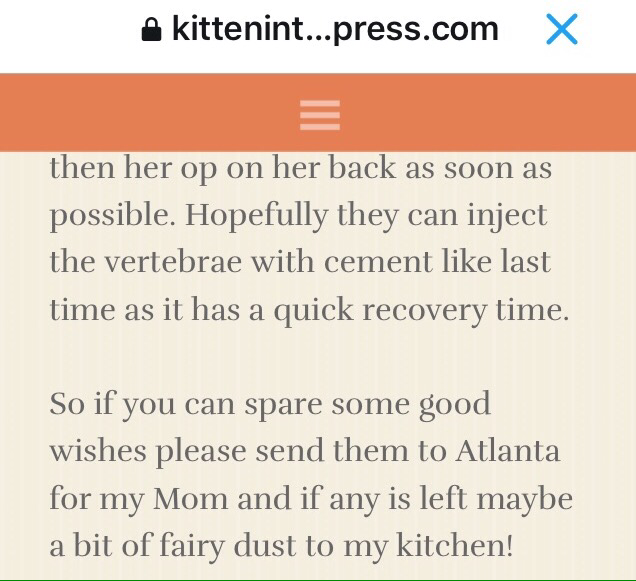 Norm had his hands full all week project managing it and looking after Caitlin and I. We still had to eat and function even without a kitchen.

The plumber and the electricians were there Monday and Tuesday rewiring and moving the plumbing and putting in the water supply to our fridge for the ice maker.

Pixie and Panda both helped. AKA nipped the heels of anyone who came near their Daddy.

The room was all empty and ready for transformation when they arrived after Norm had been working all weekend to get the old cupboards removed.

Norm was so good about being resourceful and managed to make a plan and feed us all week.

Monday I worked in the morning from our offices in Canal Walk. I then went to the client in the CBD and ended up home late so that evening we had chicken kebab take aways from Spiro’s in Hout Bay and this gave me left overs on Tuesday for lunch. If I don’t take my lunch it can be a struggle to get Banting meals.

Tuesday Cordelia was there and at least some of the dust was dealt with. The only problem was that Cordelia also thought she was helping by putting away all of the items I left out as my survival kit into random boxes, so now we have no idea where anything is. I had left out 3 plates, bowls, cups, glasses etc just to get us by. Now it is a mad scramble to find a cup or fork. Then you often have to go upstairs to wash it in the bath.

Norm managed to set up the washing machine outside so that Cordelia could at least do some of the laundry. He also managed to do a shop, and when I got home late that evening he braaied us all some gorgeous fillet steaks on the gas braai. He had gotten some lovely salads from Spar the day before so we finished off those. It was really tasty and all low carb.

On Wednesday the joiner arrived to start to put in the cupboards. I was impressed at the progress they made.

I was again working from the other side of town on Wednesday and then I had to go to my other client in the CBD. I hate all of that motorway driving. That night I just got a pizza from Posticino when Norm got us food as I couldn’t face searching for cutlery, going upstairs to rinse it and all the other hassle.

Thursday afternoon I saw on Facebook that there was a two hour delay getting home due to traffic issues related to the building of a fancy block of flats in Bakoven. They had a stop go system operating during peak rush hour as one lane was closed while they dismantled a giant mofo of a crane. Rather than sit in my car I stayed at work til 6 before I ventured off, but still got stuck when I got to Camp’s Bay. At least it’s beautiful.

It was very misty over the sea.

Since I got home so late on Thursday Norm cooked for us again. He cooked pork fillet on the gas grill and bought salads. Halloumi and butternut and a crunchy salad from Woolies. We don’t have anywhere to prepare anything in our non-existent kitchen. Food has to be mostly ready to eat. The halloumi and butternut salad just needed a minute in the microwave.

We sat outside as it was a hot evening and put on the fairy lights to summon our mischievous fairy friends.

After dinner we just relaxed as we had a crazy week and it felt like it went by in a flash. We decided to watch the third US Presidential debate. That orange slime ball of Trump revolts me. Hilary has her shortcomings and I do not fully trust her. However I feel that she will be a decent president. I see how the alt-right and religious zealots love their leader. 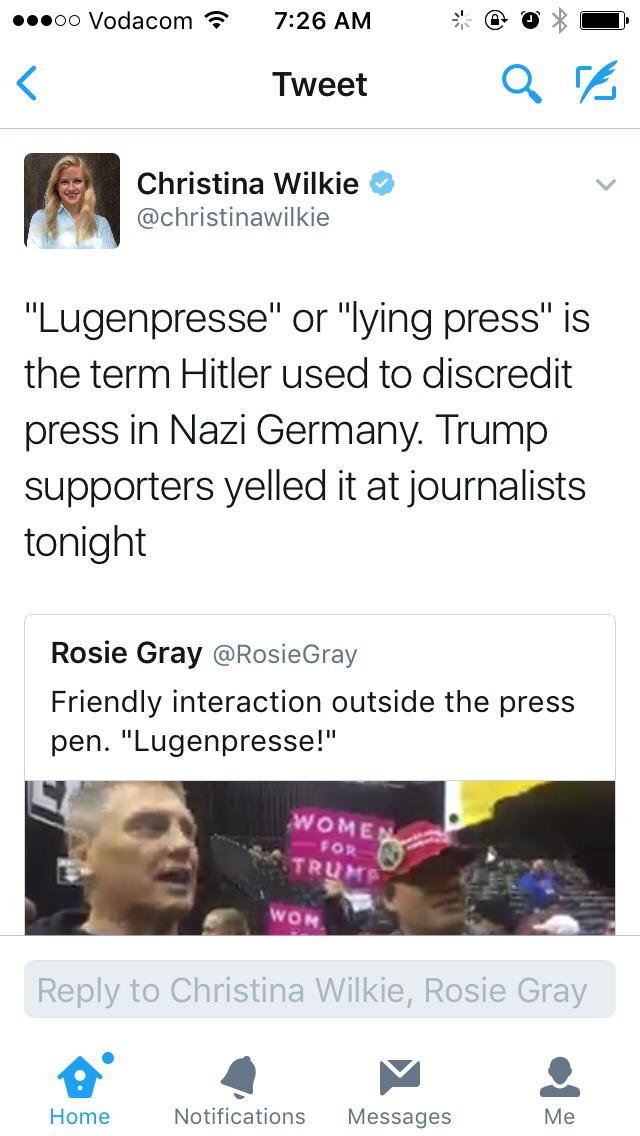 So yes the devotion of the survivalists and the rifle carrying conspiracy theorists make sense, but I can’tunderstand how women can vote for Trump. It is unfathomable. Are these women raised on Fox News and a lifetime of so much misogyny it is part of her own reality?

There is just so much hatred in America it is frightening.  Add on so many guns and it is a volatile mix, a keg waiting to be lit. People often ask me do I not miss the States? No. I miss my Mother but nothing else. Ok maybe shopping. But not that hostile energy of hatred and paranoia I see on the news and even on my own feeds on social media.

It can come from some surprising corners. Everyone who knows me knows I am a strong supporter of the LGBTQ community (and all variations of any of these ‘labels’) and their rights. So when I was attacked this week on Twitter by a trans producer I was shocked. especially as she attacked me about an article I retweeted, I didn’t even write it! I shared an article from the Medium site.

I woke the next morning to a barrage of assault. A series of 6 abusive tweets about the fact that the trans community had created the term rape culture and as cisgender I know nothing about rape culture etc etc.

No honey, you know nothing about me. She wished I had been born CAMAB so I would understand. Her hostility didn’t help me understand anything.

I blocked the toxic cow. Before I did I checked her Twitter page and it was full of her trolling people. I think she must be a very sad and angry individual.

Friday rolled around fast. I couldn’t get away from work early as I wanted to miss the crane removalstop go traffic so I only got home late.

The baskets and drawers were in place as were the electrical sockets. We have 2 large food larders by the fridge for groceries. I have sooo many electrical outlets! 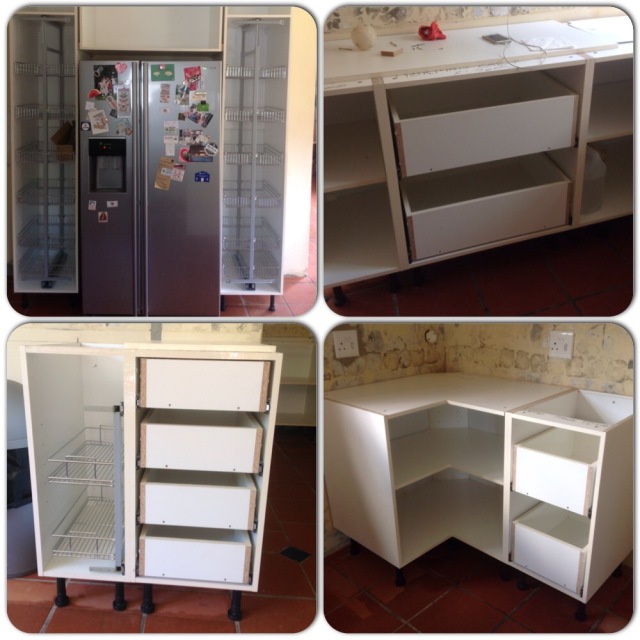 Norm got take aways for us when I finally got home, he and Cait had Banting food from Spiro but I went for Fish and Chips. When he went to Spiro they told him they had my fave tiny squid so I got a portion of those brought home as a surprise!

I have 1 week to go until my party and my costume is finally sorted. I ordered from a local Cape Town shop I found online called Costume Crazee. It arrived Thursday evening but was tiny. I emailed the shop and they sent a larger size and collected the smaller size the next day. No hassle. Amazing customer service! I am getting so excited!

Friday evening Norm was out most of the night with HBNW.  Some bad guys were spotted trying to break into a property and the security providers, the police and many others were soon hot on their heels. Norm was in and out most of the night bashing round on the mountain and listening to the radio when he popped in at home.

We got up and out on Saturday. We had a few errands to run but I didn’t make a list and I forgot half of them. Oops.

As we struggle to feed ourselves with no kitchen we went out for breakfast. We stopped at Greens as it was on our route.

They forgot the bacon! When we pointed it out they returned quickly with a plate piled high with bacon. No damage done. It was delicious. I liked the extra spinach leaves as well. The eggs were creamy and the mushrooms in a delicious creamy sauce. I liked the tang of the lemon I squirted over the avo and spinach.

We headed over to Gelmar in Tokai and were so happy when they had 42 of the handles we need. 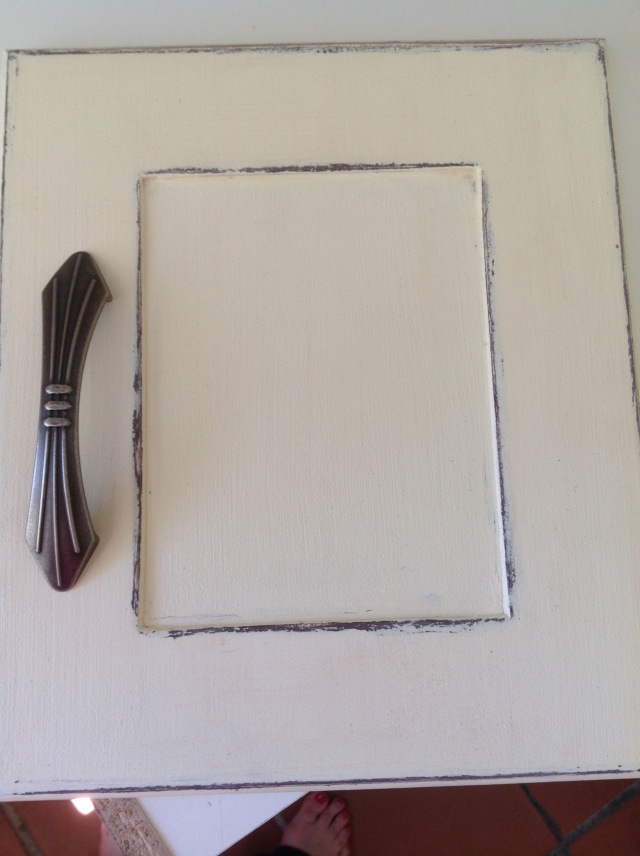 I still only have the sample doors as our schedule is off by a week. The company who made the carcasses messed up the doors which knocked on a few days, then the painter who ended up making the doors had twice as much work as she originally accounted for which adds on a few more days and the next thing you know you are a week behind. I think we are still going to be done before my Mom and Joy arrive. We may not have time to do the tiles and paint but we would enjoy doing the choosing of tiles and paint colour with Mom and Joy’s input.

Saturday evening I wanted to see my ex-brother in law who is visiting from the states. Caitlin, Norm and I went to meet him and my ex husband Hugh at Dunes in Hout Bay. It’s handy as only 5 minutes up the road.

We arrived just before sunset but it was howling with wind so we were lucky to get a table inside. 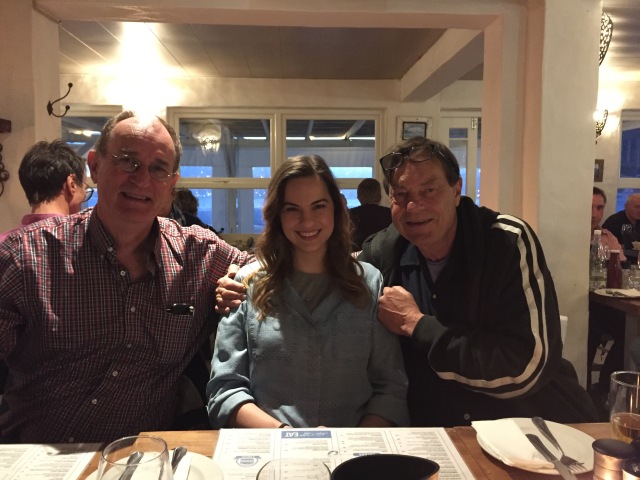 Service was slow and our waitress rather surly. I’ve come to accept that as the norm there. I only eat there if we have visitors or guests. It’s tradition.

I had salmon roses to start.

For my main I asked for my steak to be medium and pink but not bloody. It was so raw when it arrived it was still breathing. I sent it back but when it came back it was perfect and it tasted delicious.

After the waitress served us she went to top up our wine glasses and somehow managed to knock over a glass of red wine all over Caitlin. Head to Toe. She didn’t offer to help, didn’t offer a cloth or anything, she just carried on faffing. Caitlin took off her shirt and the waitress put it in salt water. She never came and cleaned the wine off the floor, the manager never approached us to apologize, no offer of compensation.

This morning as always I woke at 6 but I had a long lie and Norm brought me coffee in bed. I met some girlfriends at my fave new venue Foxcroft Constantia for lunch. Norm and I collected Alison on our way and he dropped us off so that we could have a glass or two of wine and not worry about driving.

We met my friends Nicola and Janine.

We chatted loads and caught up with each other’s lives.

We ordered lots of dishes as they are tiny.

We tried the dirty steak. Thinly sliced rare fillet with Anchovy, guasacaca, pickled cucumber. It was divine. It is R75.

The Duck is a main on at R 190, it is a 7 Day Dry Aged Duck Breast with Turnips, fermented plum, gem squash, kale. 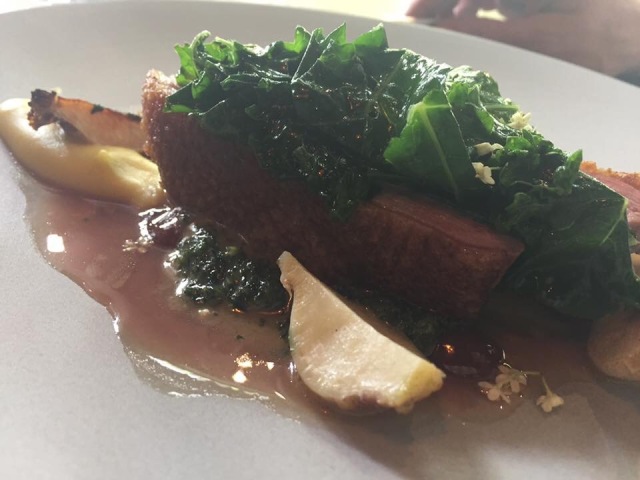 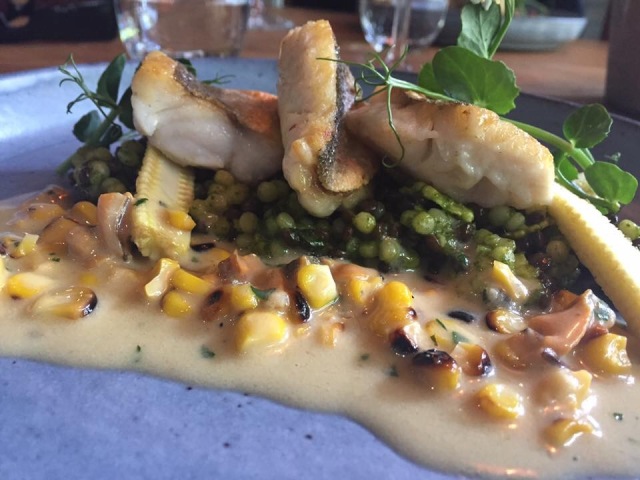 Then for dessert we got 2 sweets and the cheese platter.

We got the compressed strawberries at R70. Toasted croissant, mascarpone and sweet berries. This was the star. Wow.

Raspberry Beignets for R65. Litchi milk ice, raspberries. These were better when I came previously. 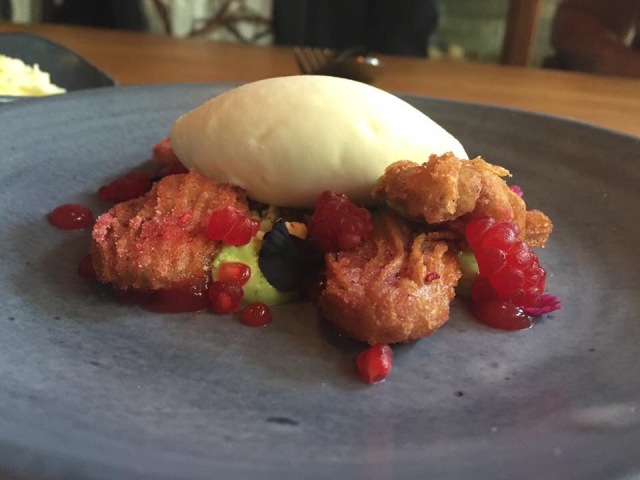 And a cheese platter which came with a gorgeous flavored butter and a basket of divine bread. Selection of local and international cheeses, preserves for R120.

We had a lovely time, I came home a bit midday tipsy. I might have a nap. That’s what weekends are for after all.

Enjoy the remainder of yours. Xx

One thought on “Fairy Dust & Foxes”