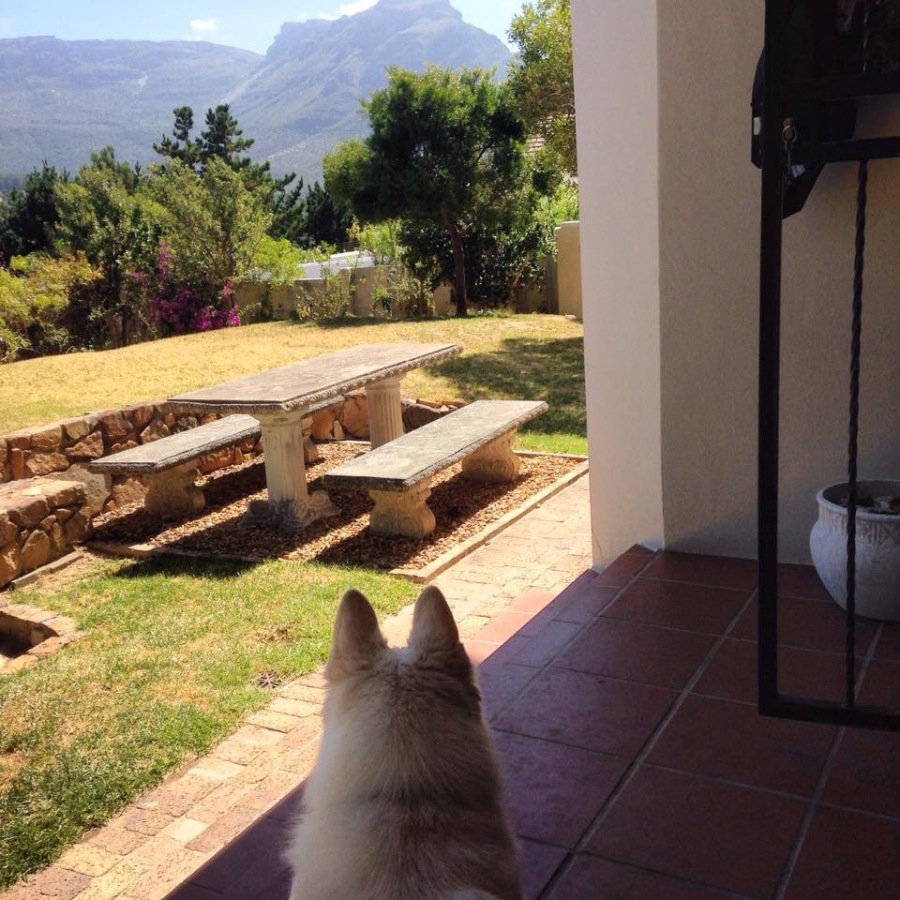 The new year has started rather beautifully. I’ve been so luxuriously lazy all week. Norm and I stay in bed until the heat or the dogs drive us out of our nest. Norm feeds them, lets Navajo out to roam and then makes us a coffee and brings it to me in bed. I sometimes move straight to a costume and sarong rather than bothering to dress. I spend the majority of the day either in the pool or in the shade of my lovely brolly. I’ve even read 2 books! 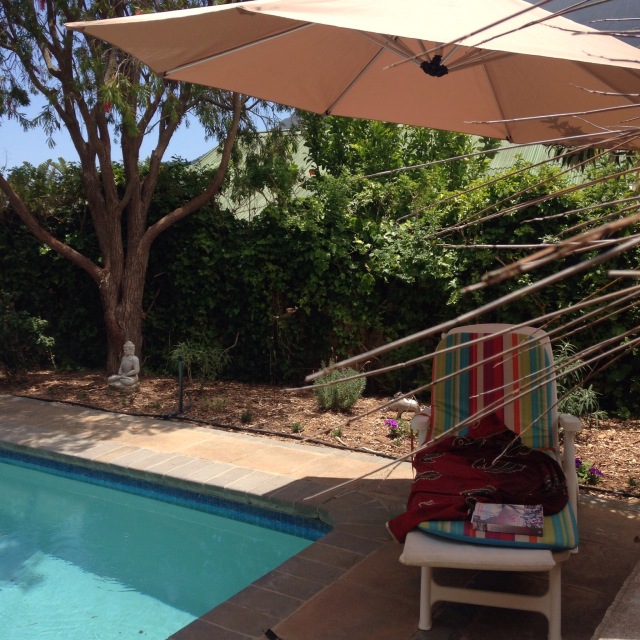 My most taxing mental challenge was where to put my Xmas Owl. 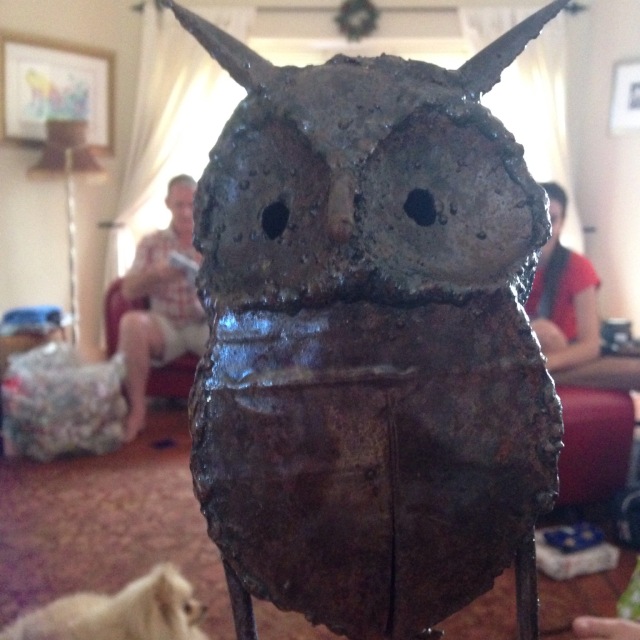 He made an appearance in the tall grasses overlooking the pool. 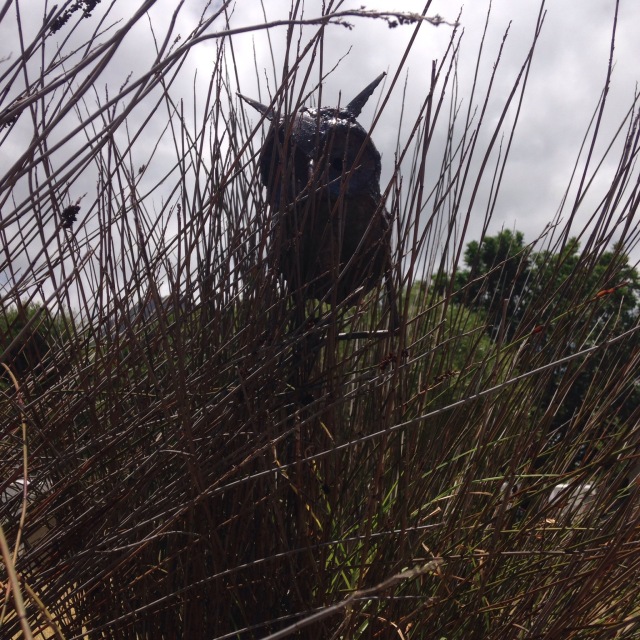 As well as a few other obscure spots.

But finally we decided that as South Africa is suffering a drought that he might want to share space with my other birds at the wee watering hole. 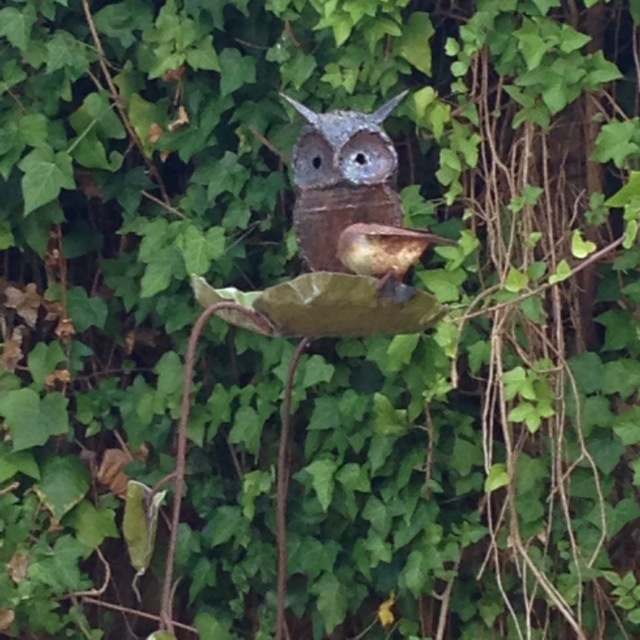 Unfortunately for many their new year has not been so idyllic. A guy I went to high school with died suddenly this week. He was a lovely boy back then, with me leaving my hometown so many years ago I’ve lost touch with most, but judging by the pics on his page he was a well loved family man. So tragic.

I was very excited to welcome in the New Year at Spiro’s again this year particularly as we were attending our friend Mel’s surprise birthday party.

They decorated the tables nicely and left sparkly bowler hats and tiaras for the guests. 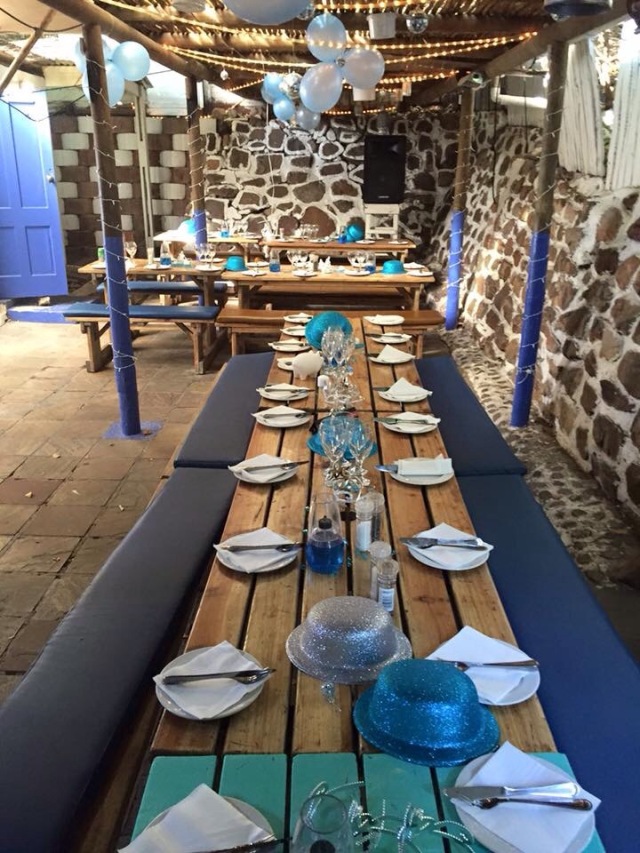 I like the simple rustic Greek style of Spiro’s. I never feel like I am out of place. It’s a welcoming vibe. We didn’t take any pics as it was hot and I was tipsy. We had lots of fun though, we danced and had a nice evening just tootling round chatting to people and skipping outside for a bit of cool air. Norm looked sexy in his kilt, it was so hot he just paired it with a t-shirt.

The starter was a vast selection of Spiro’s usual platters and I made the rooky mistake of overfilling on these and not leaving room for the divine lamb, chips and salad which came for mains. But I was starving by the time the starters arrived. It was a shame I was full as Norm said the lamb was divine. 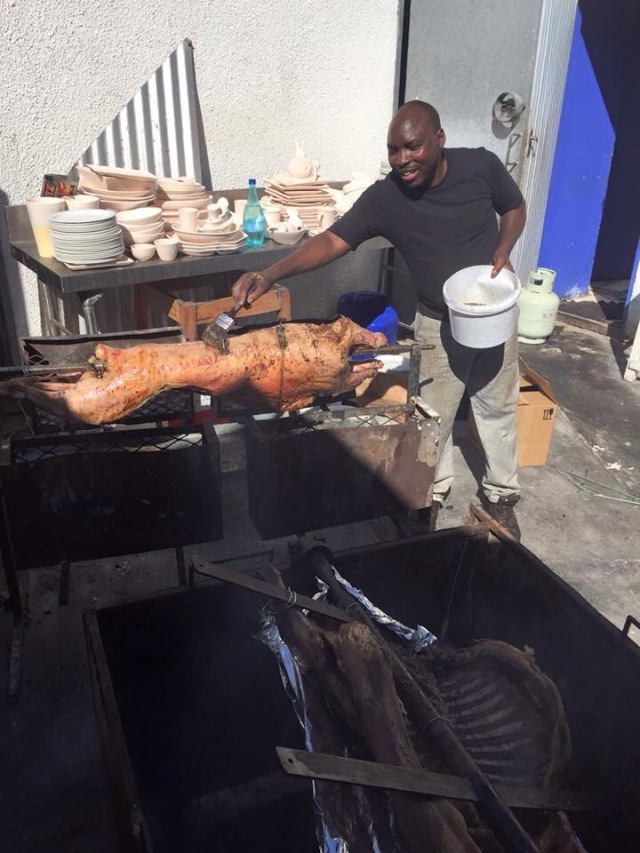 We had spent the day slobbing about by the pool and we were tired so we literally made it to midnight and dashed after we had a kiss and hurled our plate (in the Greek throw a plate way, not as in hurled up our food). As midnight started getting near people seemed to pack in from all over, ending up crowded and festive. But lawdy it was hot.

We headed home and got straight into the pool. We had a swim while listening to some live music from across the bay. It was rather dreadful which was amusing in itself so we swam round in the dark giggling.

The dogs were so excited, Panda got an attack of the Zoomies and ran at full speed around the bedroom, round and round the bed. It was hilarious,

We saw that there were some stunning fireworks at the V&A Waterfront. 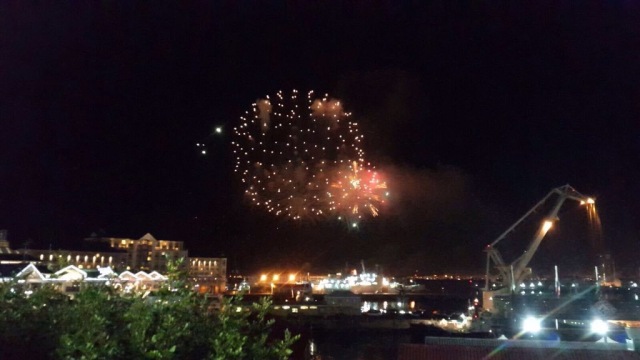 Luckily you can’t hear them from our house and even if you could, our pets have never been bothered by fireworks.

New Years Day is the day when millions go to the beach. 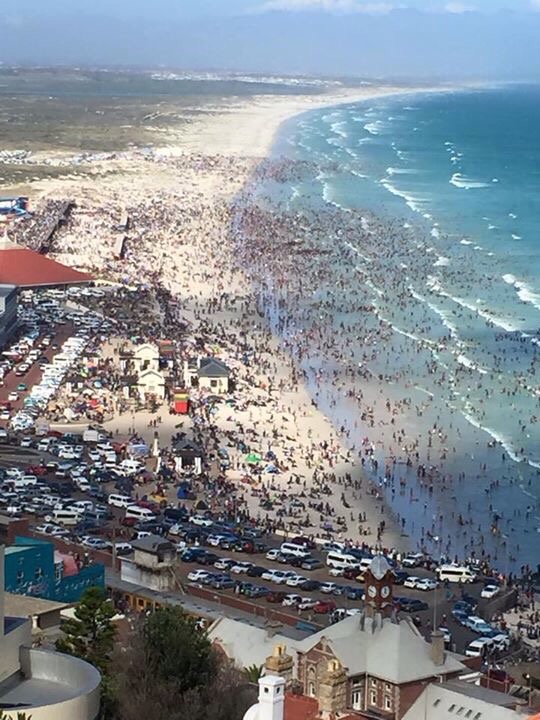 The idea of navigating all that traffic and crowds is not appealing. I am so grateful for my pool.

We are going to try a bit of Banting and reduce our carbs. So we decided to braai on NY day. We just made a big salad and I fried mushrooms in garlic and butter and we grilled steaks and chicken sausage. It was all good and I had plenty to eat, I didn’t miss the usual hassleback potatoes toooooo much. *crosses fingers*.

Norm had bought a whole fillet so I cut the rest into chunks for the next evening.

Saturday Caitlin had her friends round to swim and I had plans to go with Retha to lunch with our friend Louis in Scarborough at The Hub Cafe. We drove via the stunning Chapmans Peak drive. 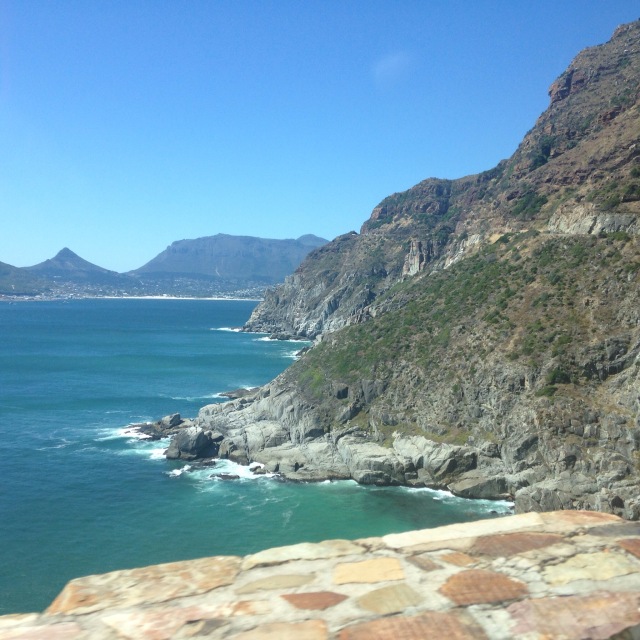 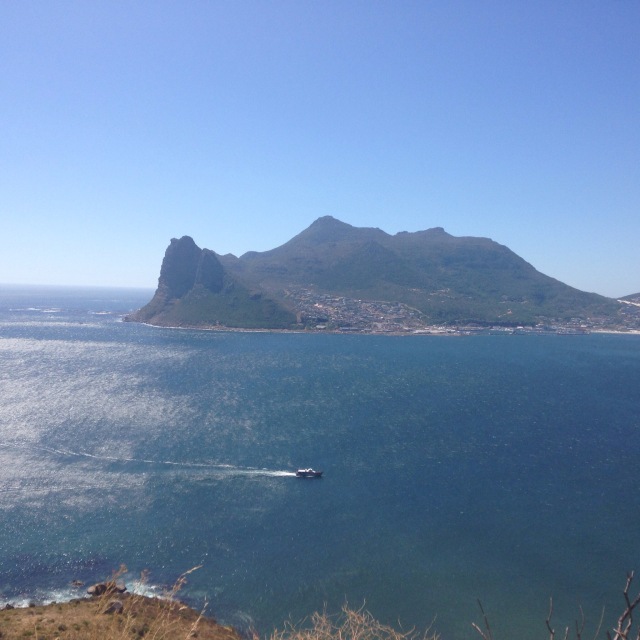 The sea was exquisite and the weather perfect, if a bit hot. We arrived and settled in. There were a few comfy looking couches on the balcony. The chairs inside were metal and I found them incredibly uncomfortable. But I got a big butt so maybe it is user error.

I suggest if you go that you book an outside comfy couch. I eyed them covetously the entire time.

Anyway….. The place was packed. Both Retha and I ordered fish and chips with mushy peas. 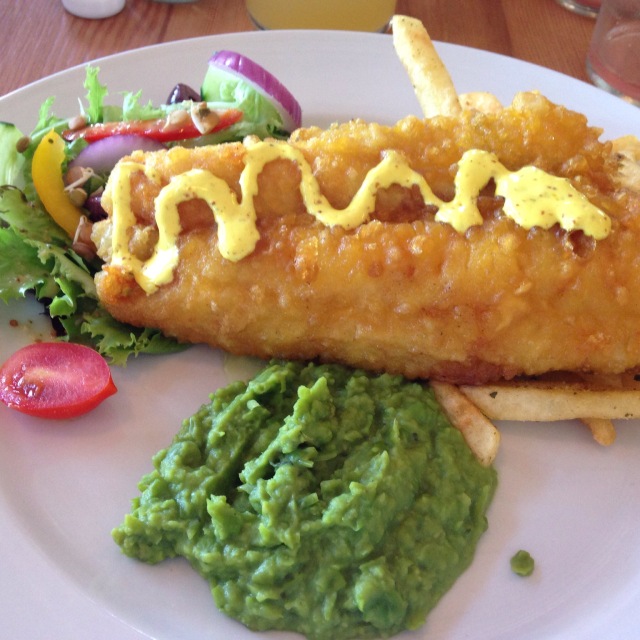 Yes, I know, don’t look at me like that! 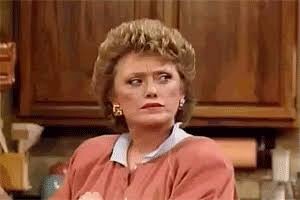 Yes, a mere 12 hours of Banting and I’m on the chips. I’m hopeless, I have zero willpower. But I do love mushy peas. I didn’t however love these, they had an odd consistency and I found several whole stems of some nature which makes me think they did use fresh peas but possibly didn’t even bother washing them if they left on the stems!

The fish had quite a few bones in. Maybe the Universe decided to say ‘ok you can misbehave on your food but you bloody well won’t enjoy it.’ And I didn’t particularly. The fish was cooked nicely, the chips were yummy and the bit of salad tasty, but the continuous need to extract bones out from a mouthful of food put me off terribly.

Retha didn’t have a single bone and enjoyed hers. Figures I get the boney bit. I get it Universe! No bloody chips!!

Louis had the burger which looked great. 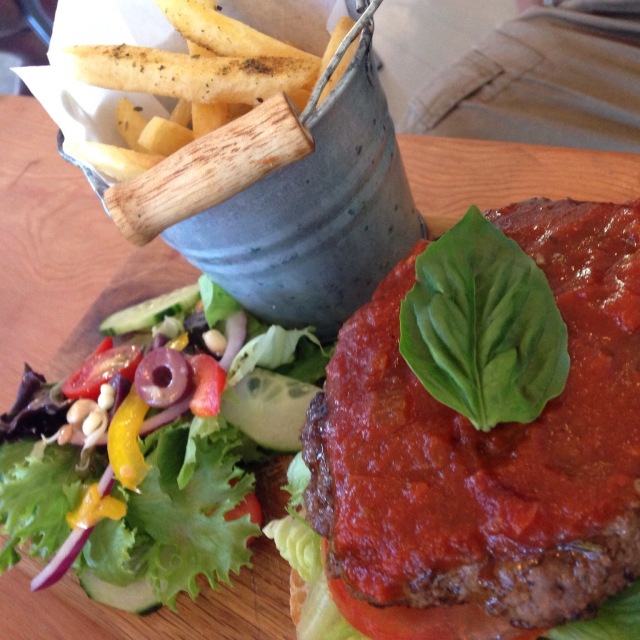 He seemed to enjoy it.

We had a slow leisurely lunch and caught up with each other. Retha and I had a slow drive back, we even stopped for silly pics. 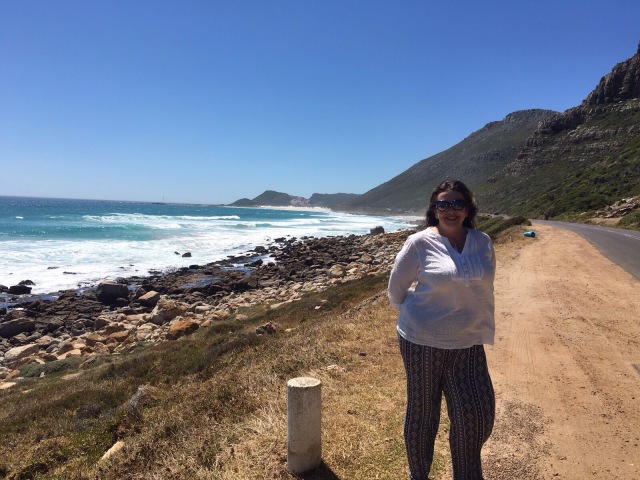 It was so windy so I decided to  do a Titanic. It made sense at the time.

I came home and was straight in for a swim. Caitlin and her friends had gone to The Riverway Cafe for lunch and joined me in the pool for the last hour or so. They all went out later and I cooked the rest of the fillet steak with some broccoli and carrots and made a basic salad but threw in some goats cheese and walnuts to accompany it. That’s one of my fave taste combos, creamy goats cheese and nuts. Mmmm. 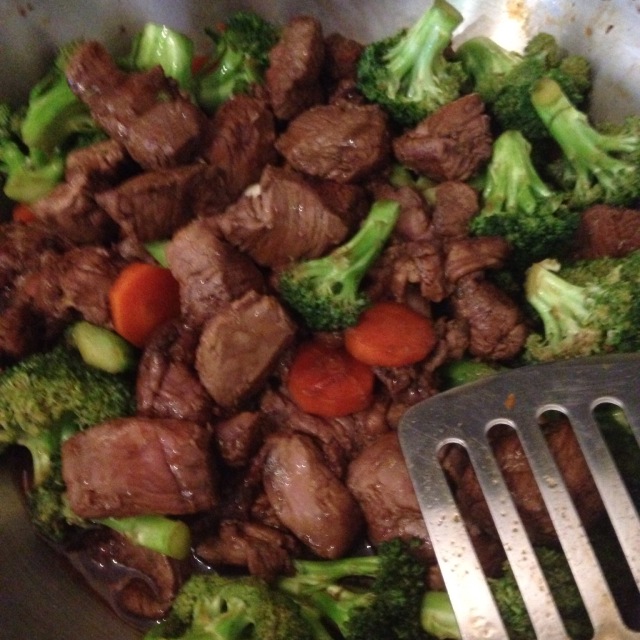 It was yummy and all of it was devoured by Norm, Lily and I as Lily drove back from George as she had to be back at work today.

We have been dining outside every evening in the covered patio at back. It’s too hot to be inside for long, I spend every second possible outside.the dogs love it as they enjoy mooching around outside. 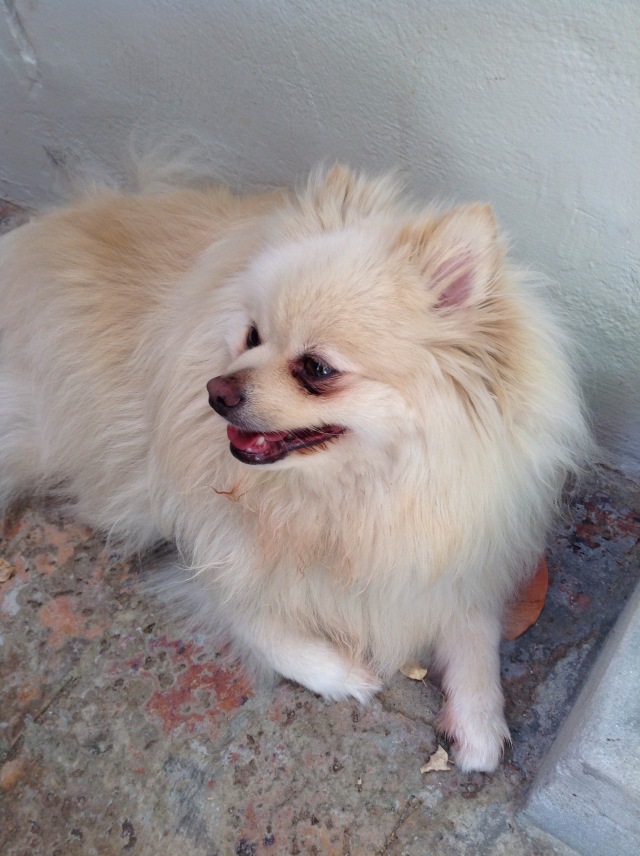 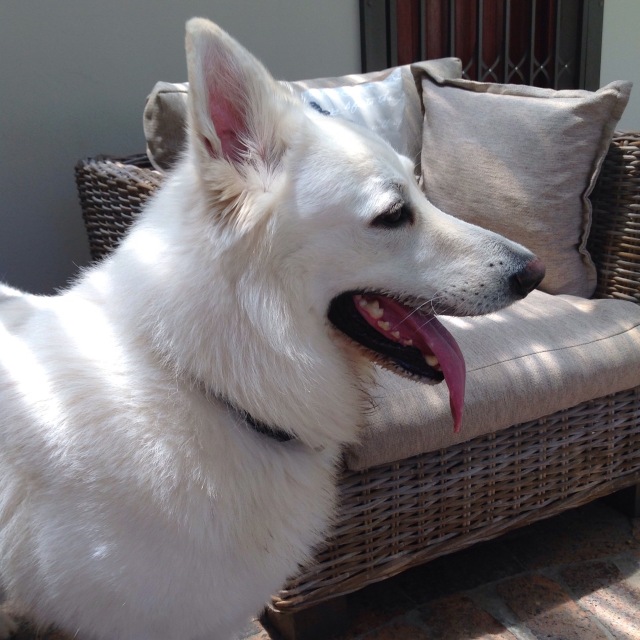 Navajo loves lying on top of my feet, we spend a lot of time in this position, me gazing at Table Mountain, Navajo just happy to be guarding me. He’s such a lovely boy. 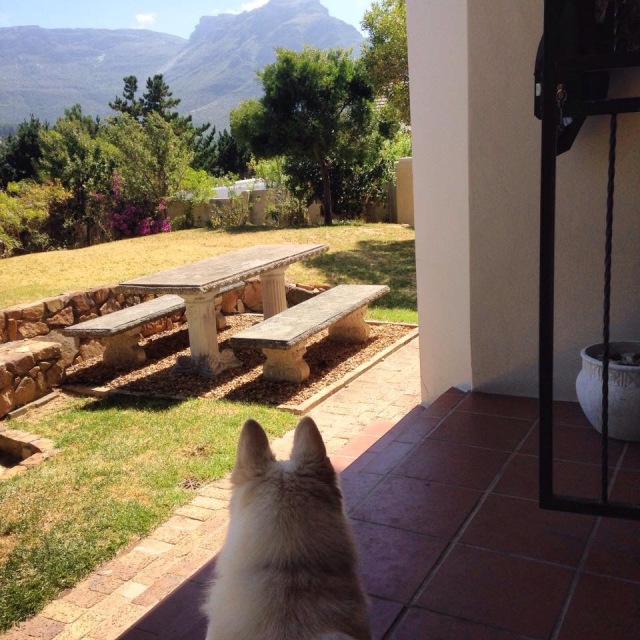 My Dogs are such a big part of my heart. I was so sad when Lily told me last night that Josh’s bulldog Edgar died suddenly. He was 11.5 years old. He was such a funny schnuffly thing. RIP Edgar. Here is a pic of him from a few years ago when we stayed at Josh’s. 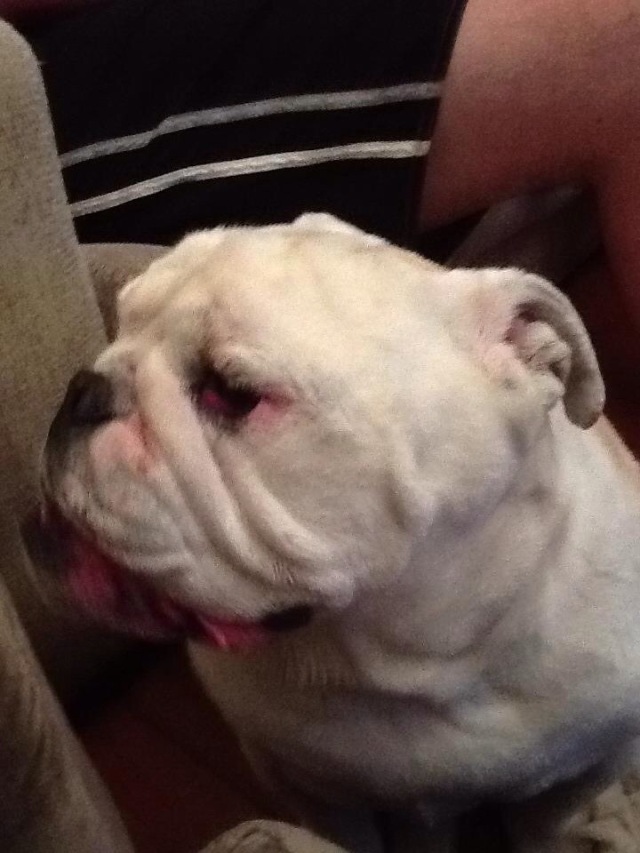 Today I pinched Caitlin’s lilo and bobbed about most of the day. 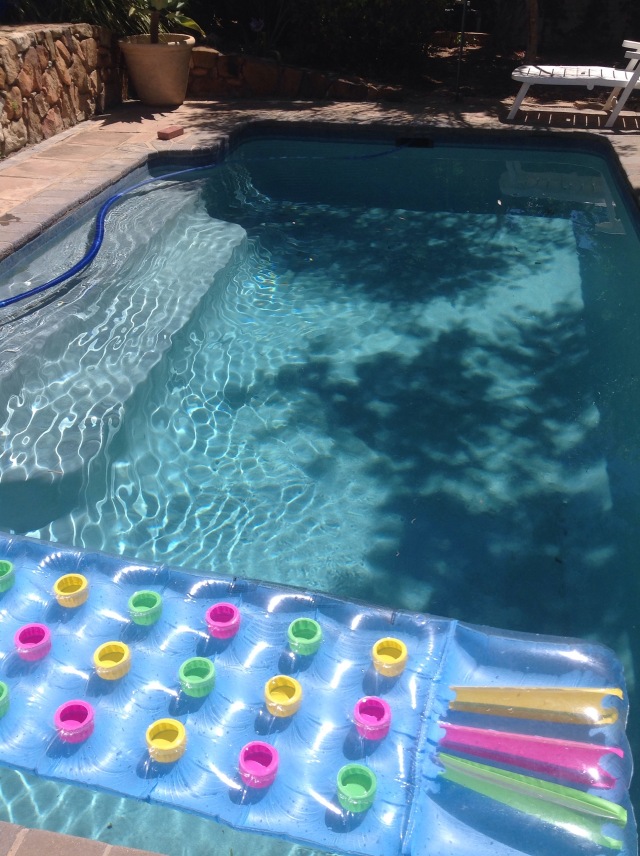 I’ve been carb and sugar free all day. I’m trying. Next I guess I am going to sweat. I hate exercise as much as I love potatoes.

Caitlin flew to George for a few days break. I go back to work tomorrow. I love what I do, I just hate working. 🙈

I wish you all health, happiness and prosperity in 2016,

It’s back to reality for me.

2 thoughts on “Endings and Beginnings”