I have been very spoiled over the last few weeks, that’s an additional benefit of having friends from overseas visiting. I have a lot of things to cover so grab a cuppa tea and settle in.

Last Tuesday night we went to Quinton’s at Oakhurst Barn for dinner with our friends who were over from Scotland.

There are just so many fabulous places to go in Cape Town, it was hard to narrow it down to enough choices to fit into their week-long visit. I chose Quinton’s because of the service and the venue. It is close to our house so easy to go on a week night, and it is the most stunning and luxurious of all of the HB venues in my opinion. 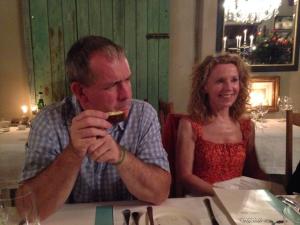 We opted for a 1st and 2nd course rather than a main and dessert as none of the desserts particularly appealed to us.

For our 1st course, Caitlin and I could not decide which to choose and had both narrowed it down to the same choices so we decided to share. We ordered the Sweet Potato fritters and the Asparagus. 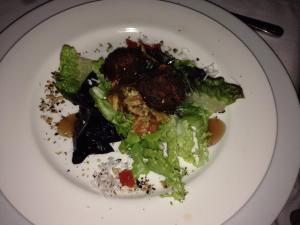 The asparagus was described as Steamed asparagus with quails eggs and a sauce béarnaise at R84 a serving, which is about $7 USD. 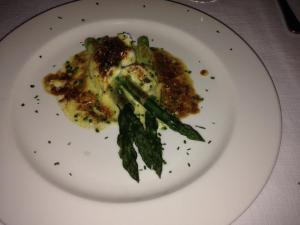 I was really looking forward to both dishes, sweet potato fritters are a dish I have only ever experienced in South Africa, I think that they were introduced by the Malaysian people who settled in SA but this may be a Lisa Fact. Whomever I have to thank for introducing them, I am glad I met them! However on this occasion I was slightly disappointed.

As you can probably see from the pic, the fritters had been left to fry just a bit too long resulting in them being a wee bit burnt. This made them a bit dry. The flavours were still nice, but it was rather disappointing to pay over 35 bucks for a single burnt ball of sweet potato. If you are going to charge those sorts of prices, then each item you serve must be faultless.

For our main several of us decided to have the East African Prawn Curry, described as served with coconut, lime and cashew nuts. This was rather pricey at R215 but we decided to row the boat out and give it a try as we love prawns. 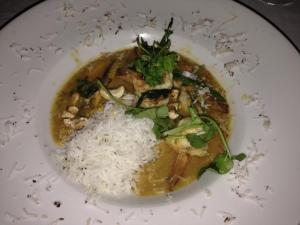 The blokes both decided to have the fillet steak, which is what I usually have when we go there.

The prawns were really nice and plump and fresh, however the sauce was very mild, I like a bit of kick in my curry but I have never eaten an East African curry, maybe the east Africans like it mild? But the dish was nice, was it R215 worth of nice? No. Not really.

I wonder do you judge a venue more harshly if you have recommended it to someone else? Maybe so. Everyone was happy enough, but I wasn’t 100% taken with our food.

Thursday I had an appointment with my GP so I had to leave work early. I had spent the week looking like Cyclops as I had a sty in my eye. I have never had a sty in my eye, which meant I did not know if it actually was a sty or not as I had swelling under my eye as well as the normal symptoms of tenderness and swelling of the eyelid. I asked him about my hip pain and he seems to think it is bursitis in my new hip. I was not keen on the idea of getting a cortisone injection so I agreed with him to give my myosteopath the chance to resolve it and have been for a few treatments since then.

Thursday night my book club went to Clay Café to all create a new piece of pottery. The concept is that you choose a piece of raw pottery and then you choose your paints and designs and decorate it yourself, leave it for them to fire and then you collect it. Caitlin has been wanting to go for a while now so I waited on her to finish work. This meant we were very late and most people were finished when we arrived, now knowing that they normally close at 9pm.

Caitlin did a very complicated design which meant she didn’t finish, I just did a simple design (as that is the limit of my skill set) but Cait is very talented. So I managed to finish mine, Cait will have to go back to finish hers. But it was lots of fun. I forgot to take a pic of my work prior to firing so you just have to wait until it is finished. Try to contain your enthusiasm 🙂

We had challenges with getting there and arrived over an hour late, but our friends had been there from the booking time and had gotten stuck into the cocktails and bread plates. They seemed to not been terribly stressed about our rather rude behaviour.

I ordered a cocktail and got busy perusing the menu for the same items which had me so enamoured after the 1st visit.

We ordered a Bread board with butters and dip priced at R35. Norm wolfed this down in seconds! The bread was just a French loaf, but normally there are lots of interesting breads from the deli, I think we were just a bit late.

We had the same issue when we wanted to order the charcuterie platter – it wasn’t on the menu that night. That was one of the main reasons I loved it last time we went so I was rather disappointed.

We then ordered:
Grilled haloumi w basil and balsamic R28
Flash fried prawns pilipili w basil R40
Seared fillet with mushroom duxelle R45
And some cheese beignets which were available but are not on the online menu so I cannot tell you the price.

The portions are tapas sized, so after all of the above Norm was still starving so we ordered another bread plate. I tried to convince him to order another piece of fillet to go with it, but he thought the portion size and the quality of the steak not to be aligned, so he gave it a miss.

For dessert we ordered:
Berry Pavlova – it is not on the menu online so I cannot get a price for it.
Churros with chocolate dip R28
Baked cheesecake topped with fresh seasonal fruit and cream ~ R32

I have no photos as we were in a very dark area, the restaurant was packed out and our table was set up in the little area outside the venue. Our guests were not happy there and asked to be moved but there was no where else to be moved to. I was happy enough there other than it being too dark for photos.

All in all – it was very expensive (R450ish in total for Norm and I) for what we actually had to eat. Norm was starving and had a sandwich when we got home.

By the time we got home I was exhausted as I had been up since 5.30 am. I have found that with all of the road works going on, if I am not on the road by 7am my journey can take well over an hour.

Saturday morning I was up and out early to get to my hairdresser by 10, I had my hair coloured and headed back home and then Norm offered to take me out for lunch.

We went to The Riverway Café my new fave lunch spot to have a wee bite. Norm tried something new, the pulled lamb, it looked divine and he loved it.

It is served with tzaziki, pita bread and sliced grilled zucchini. Or baby marrows to your SA locals.

I had a sandwich and the piggy poppers. I am going to have to go to PP Anonymous. I crave those little devils, they haunt me, enticing me with their piggy chilli fabulousness. Divine.

After Norm finished, Julie popped over with a slice of Galaktoboureko that her visiting father had made, and oh my goodness was this a heavenly addition to their pastry table. It is a custard pie in phyllo pastry, so light and fluffy and delicious. 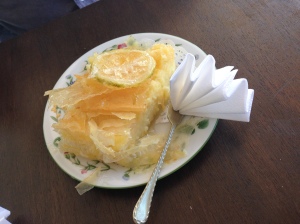 I think Daddy RagaMan may need to immigrate back to SA! (and yes I know he is not actually a ‘Ragavelas’ seeing as he is Julie’s Daddy not Spiro’s, but as I do not know Julie’s maiden name I have made a new name for said Daddy.) We need his pie to be available at all times.

We then had a wander round the shops and popped by the eye doctor to order new contact lenses for me then we headed home to relax and for Norm to prepare for his next work trip. Sunday I had to drive him to the airport and Lily drove back again from George to help us out with the dogs and everything else.

The girls and I have been very good about our eating healthy while on our own and we cooked.

This week has been hectic, thankfully Lily has helped so much. I had bookclub on Wednesday and last night was the first Hout Bay Women’s Gin Club. I arrived late and was the last to leave! Typical.

I’m having a weekend of nothing at all. I’m exhausted so looking forward to down time. I hope you enjoy yours!