Things have been hectic the last few weeks and I have been a bit slow with blogging. It is ramping up to the end of year craziness!

My regular readers may remember the previous blogs about the Hout Bay venue ‘Pescarne’, the 1st visit there was amazing! Really enjoyed the entire experience. The subsequent visits were of varied results and the last experience was vowed to be our last as it seemed to be depreciating rather than improving. However we were invited to go back with our friends Retha and Pierre and as it was Restaurant Week (www.restaurantweek.co.za) in South Africa there was an offer on which was too good to pass up so we decided to give them one more chance.

The booking was made for a Wednesday and I was worried we might be the only people there but by the time we left at the end of the evening it was pretty much full and had a great buzz, that was one of our issues previously was the lack of vibe as it has been empty too often.

If you ask my opinion (or even if you don’t actually you are gonna get it unless you stop reading) their issue has been their prices. A restaurant can only expect people to pay what they pay at the restaurant next door unless it is an exceptional experience.

A bottle of Warwick Estate Sauvignon Blanc Professor Black cost us R235 which seemed a bit high. But as the meal was on special it was not an issue. But if my meal had been full price it would have been a very expensive meal. However it was indeed exceptional this evening.

I had the scallop and prawn garlic pot, it was 4 prawns and 3 scallops, but not what I would call a scallop but someone said to me that they are not native to South African coasts so who knows where these came from. They were quite clamish to me, sort of like a European scallop and a clam had a baby.

Either way, the prawns were tender yet firm, perfectly prepared and nicely drenched in hot melted butter and tons of garlic. The wee scallopettes were ok. Just not a scallop by my experience. It was a perfect size, just a wee taste. I enjoyed it.

For my main I ordered the fillet steak. It was served with a delicious light creamy pepper sauce, no giant peppercorns lurking to break one of my dodgy teeth, no painful overpepperination. That’s a word. You have just never heard it before. Um. It’s American. (that only works with non-Americans of course haha)

It was undoubtedly one of the best steaks I have had, it was perfectly cooked. pink but not overly bloody. It was so tender and just really melted in your mouth. 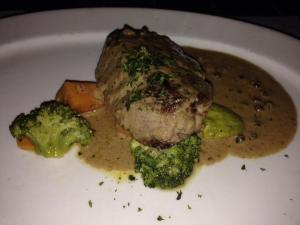 I ordered fries for the table having learned my lesson at Bistro 1682 this time I asked what came with the steak. The veggies which did come with it were perfectly al dente.

Norm and Retha both had the Smoked salmon and strawberry salad to start which looked nicer than this pic does.

For his main he had the Stuffed chicken supreme on a bed of cous cous, he said it was good.

We had a nice relaxing evening. 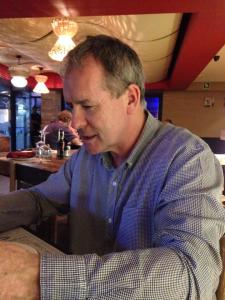 We decided to push the boat out and have dessert, mainly as I knew they have a divine chocolate fondant, one of my faves. As usual it was perfectly moist and full of warmly melting chocolate. It was rather exceptional.

Norm had the apple crumble. He enjoyed it. 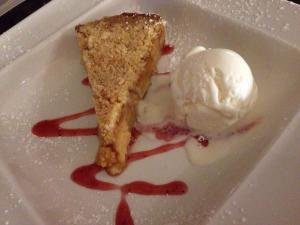 I left feeling like they had undergone some sort of salvation, that they had risen from whatever it was that had caused their slump and were finding their feet again. If you make it through the winter in Hout Bay you are often over the main hurdle and they will do very well in season with the tourists. It is a summer sort of place with the glass doors all pushed wide open and the sun slanting in as it will be staying up so late in the evenings. Tables set up on the balcony – I do wish them well.

As we were leaving we were stopped by the owner who thanked us for coming and after a bit of a chat invited us to pop back in for a whisky. But it was a weeknight and I had meetings the next day so we toddled off home.

My opinion has changed again and we will go back.

The rest of the week flew by with me managing to sell my Peugeot. It was a really low offer but I just wanted to be rid of it and move on with my new Juke. So it is goodbye to my lovely baby girl. We had a lot of fun.

She was such a sexy thing. She is off to be the guest hire car for a local guesthouse, so she will have hot young things writhing round her leather seats, sticky hot from the beach. I am glad, that is what she is meant for, not every day slogging up the mountain, she deserves a rest.

Saturday was the day of our Steampunk Halloween party. We had such fun. It was booked at Spiro’s for the first time, it was such a pleasure to just arrive and party and go home to a clean house at the end of the night. We had a shared party with Lee who was having a birthday party and provided the DJ. We provided platters for all of the tables, tapas which are always divine and perfect for a shared setting like that.

The family snapped a pic or two before people started arriving.

How stunning are my baby girls? They take my breath away sometimes they are so pretty.

Everyone made such an effort, we really had fun. 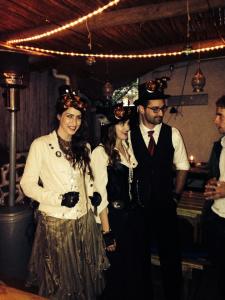 I was on the cocktails and Norm was on the wine, but at some stage we ended up doing shots, that was the end of me. I had a lotta lotta cocktails though, I was hot. And thirsty.

Anyway, after midnight we decided we were heading to Pirates to carry on and I couldn’t find Norm anywhere. So we went outside and found him sprawled across a picnic table in a stupor, about the same time I heard shouting and yelling and looked up to see a huge crowd of about 20 people spilling into the road like some beach version of West Side Story, fighting and rolling about strangling each other. My friend Michelle offered to help me get Norm home as Home Heroes were unable to arrive for an hour. I wonder why I am a member if that is specialised service. Anyway Norm was in no state to wait an hour and Michelle ran off to get her car, meanwhile the fight had reached where we were and she had to drive through the people to stop. I had to run the gauntlet, Norm slung over my shoulder Private Ryan style, the sound of imaginary machine gun fire echoing in my ears….oh wait, sorry I got carried away. Seriously it was very stressful, people rolling round our feet pummelling three shades of shite out of each other and an immobile large drunk man periodically heaving. Lovely.

Michelle got us home and we had no keys to get in, I rang the bell (a million times according to Lily) and we managed to get Norm up the steps and into bed, Caitlin and Vic arrived just after us and Victor had to help get him undressed. It was rather challenging. I have seen him like that maybe 3 times in our 18 years together.

Our bar bill was almost R4000 so I guess we did a bit of drinking. I thought I broke my liver as I was unable to function for a day. I had left my glasses in Norm’s car (which was at Spiro’s and we had lost the keys to) therefore I had to roam around the house by feel like a mole. I found some old glasses but they made me nauseous so I didn’t wear them unless I was walking.

Eventually Michelle found our keys under her car seat and we found Norm’s phone as well as his wallet. It was a hectic evening but we had a lot of laughs and I probably embarrassed myself a wee bit, but what is life if you can’t have a giggle.