Forgive me readers, it’s been weeks since my last confession. I’ll try and do a highlights version but it has been hectic!

There was a lot of sadness when Lily had a friend die last week. He was a young lad who was beaten up after a night out in Cape Town and subsequently died. It wasn’t known until after he died that he had been beaten – it was all pieced together after. So tragic. Josh came down for the weekend to attend the funeral. On arrival, Lily mistakenly closed the gate on his new truck and dented it. That didn’t help the darkness of the already dour mood.

The funeral was Friday and the kids went out after with his family but Norm and I just had a night in as I was to be up early the next morning.

My friend Jenny came to Cape Town to visit her daughter Vicky. We met when we lived in George over 20 years ago. Our former husbands worked together and our kids were at the Convent together. Now she lives in the UK and her daughter has settled back here after traveling round the world. It’s funny as neither of them have changed, Vicky is just a taller version of herself.

We booked into a class at the Pewter Studio over in Edgemead. Jenny had found and booked the course, I arranged to bring my friend Retha and my daughters Caitlin and Lily. We traced the image we selected onto the piece of pewter, so no real artist talent was required thank goodness! But we worked very hard. And laughed a lot.

We started out by tracing and then outlining the pattern we chose and built it up flipping it over and going over it from both sides until it was finished. 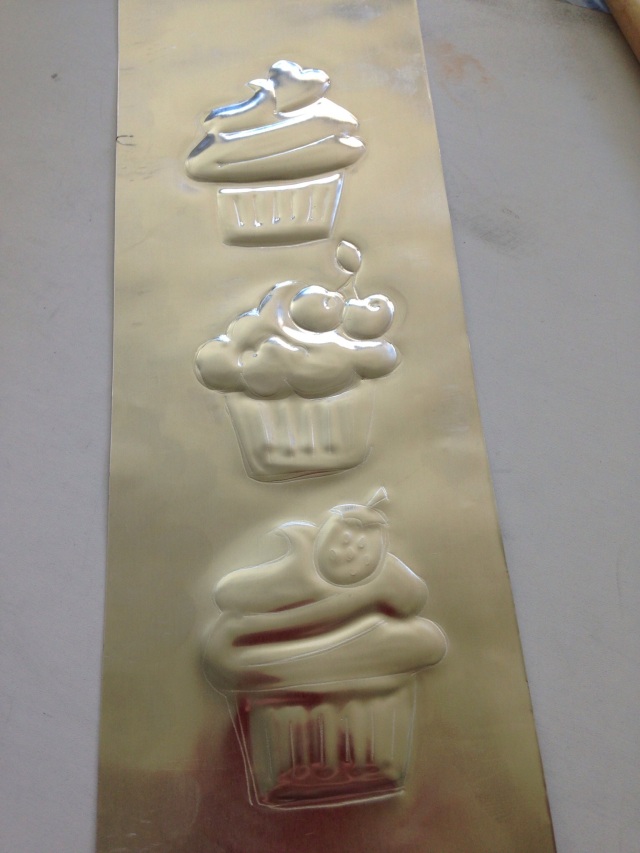 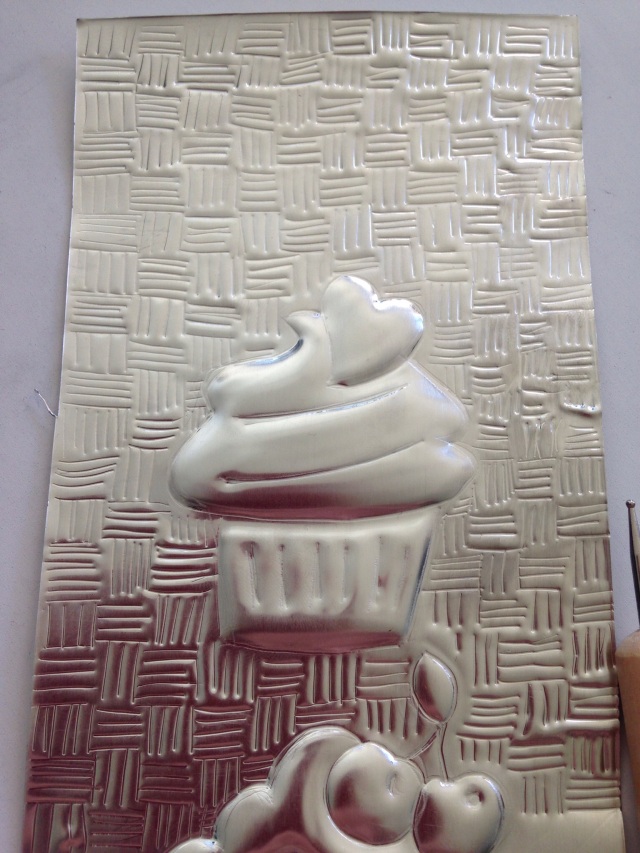 We had to coat it in a substance, then rub it off and then polish it. It was then glued onto the chalkboard and ta dah! 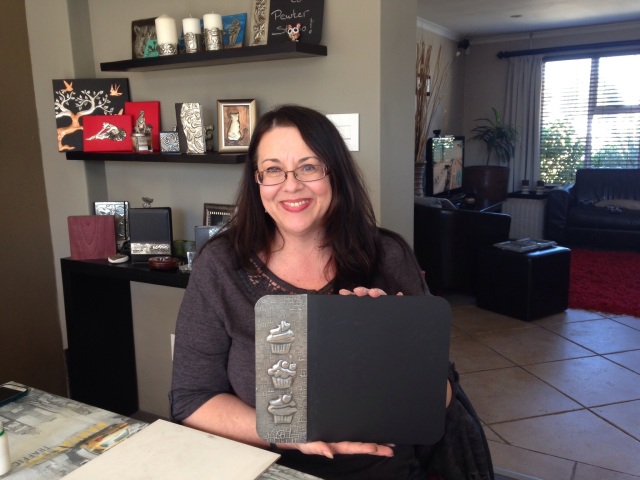 Lily did the bird houses, Retha the wine and Cait and I the cupcakes. I chose the simplest and largest pattern.

After the class my girls and Retha headed back toward their own agendas and Jenny, Vicky and I headed to meet another George escapee Annette at Maestro’s On The Beach.

We had cocktails of course.

We sat on the balcony overlooking the beach and had a stunning view of Table Mountain from our seats. 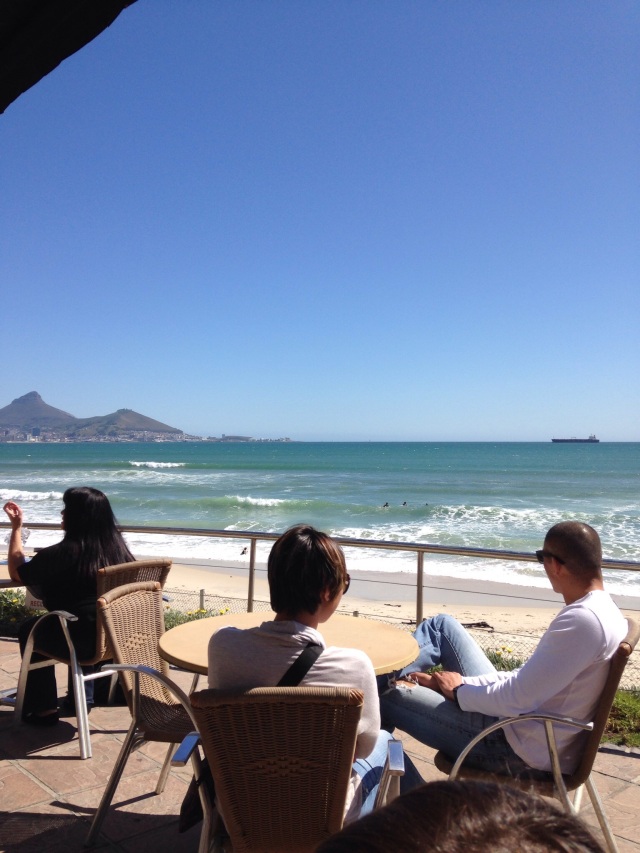 We all had steaks except for Annette who had calamari.

The food was really delicious and we all chatted as if we had seen each other just last week rather than 20 years previous. It was a lovely afternoon and then Annette kindly dropped me at home.

That night The Fray was on at the Casino. I had bought Lily and Josh tickets on One Day Only. At R130 you can’t go wrong, except I figured I would be knackered and maybe saturated with cocktails so didn’t plan to go. I was later very glad I didn’t when I found out they were standing as I couldn’t cope with that!

Sunday I made some yummy pancakes and bacon 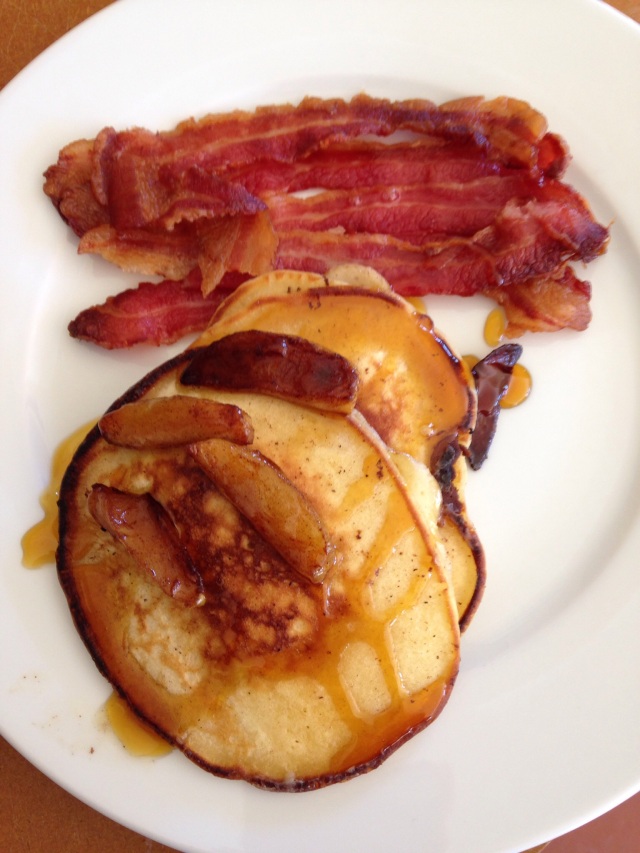 and we had a day of chilling out and puppy snuggles.

We just had to get through 2 days of work and then we had a public holiday. It was Heritage Day.

However it has also become known as National Braai Day. Whatever the reason behind it all, we decided to braai.

I had a hair appointment so still had to trundle over the mountain to the city but thanks to the new hair colour which works in 10 minutes I am out of there in no time! Once home I put together the side dishes, I did potato salad with boiled egg and loads of coriander and made a sauce of Fromage frais and hellmans and yummm it was divine. Lily made a salad and I made these Aubergine toastie things. I used coconut oil to coat the outsides and used mozzarella.

They were delicious! Next time I will make thinner slices of Aubergine and leave the skin on the edges like the recipe – I winged it but they were good. But they could be improved.

We then attended an evening put on as part of the Oceana Seafood Festival in Hout Bay. It was An Evening With Denis Goldberg. He was the only white convicted with Mandela as part of the Rivonia trial and was convicted to 4 life sentences for his role in the acts of ‘terrorism’ by Umkhonto we Sizwe. But one has to ask is it terrorism when it is a protest against a tyrannical government based on racist policies? I call it simply protest. However as it was not peaceful it led to prison sentences. They all served many years, Denis served 16 I think it was before released. The evening was a viewing of the documentary made of his life ‘Sentenced with Mandela: The Story of Denis Goldberg’ and a Q&A after. 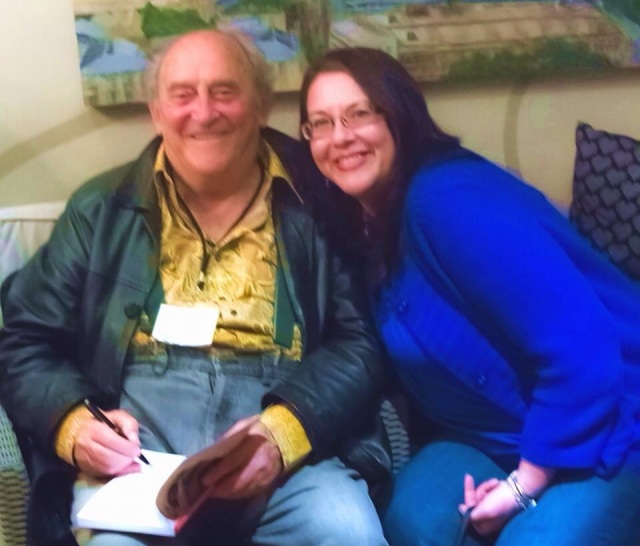 I even got a pic with him! I felt very privileged. His story was sad and touching and humbling. So many people hurt, so many lives ruined due to apartheid.

Having a midweek holiday makes me so disorientated but it was good having 2 work days! But Thursday was book club, so Norm dropped me off. As my birthday had been 3 weeks prior I forgot that bookclub hadn’t marked the occasion and was pleasantly surprised by a chocolate cake and presents. The girls got me lots of lovely gifts and Cam made a delicious meal and it was good to see them all, I didn’t make the last bookclub as Panda was too ill.

Friday was a short work day as I had my annual mammogram booked. As I have 2 friends being treated currently for breast cancer I certainly wasn’t calm about it by any means but luckily the scan and ultrasound were both all clear. Thank you Universe.

Lily had her friend Jess taking the bus down so we went to collect her early Saturday and then went shopping and for brunch at Cavendish. I had eggs Benedict at JB Rivers. They were average.

But we had a nice girly afternoon.

That night Norm and I had date night and managed to get a last minute table at Ragafellows and were seated next to a lovely garden view of the nursery next door.

We had burgers and they were delicious as always. We debated going out for drinks but realised we actually are happier being home with the family and headed home to catch the end of the movie the girls were watching.

Today Norm and I went for drinks with our friend Catherine and her son Zachary at Spiro’s. She is looking gorgeous and Zack has shot up so much!

We had a few cheeky bottles of Splattered Toad and ordered a platter for 2 to share. We ordered hummus, Aubergine dip, calamari, fish cakes, halloumi and courgette ribbons as you get 2 dips and 4 meze choices with pita breads for 198. It was really delicious and a perfect choice for snacks while drinking. Zack was ever so good, he watched the footy on Telly and watched some cartoons in the playroom. We all gave him coins to put in the toy machine and he was totally disgusted that he got a dog with a pink ribbon followed by a pink Barbie handbag. How rude! Lucky the 3rd attempt resulted in a pirate eye patch.

It has been a busy social week and I feel very blessed to have all the many blessings I have experienced. Life is pretty fabulous.

One thought on “From Pewter to Goldberg”