I love entering competitions. I’ve won several things just from the odds of how many I enter, I won 2 tickets to see Oklahoma! at the Artscape Theatre and on Friday after work we were in a rush to get back to the city before the curtain lifted. We were pleased to see we had front row centre seats, the best ever. We could peer right into the orchestra pit. The cast was pretty good and the singing not bad. The dancing was very good. The cast was small kids right up to the older members and there were a few big cast productions. It really entertained.

Saturday I decided to finally bite the bullet and book in for laser to deal with my body hair. Shaving is just a pain with my hip as I’m just not as bendy as I used to be. Waxing is what caused the issues on my legs. So the dermatologist told me to try laser. I took a few pain pills and Norm dropped me off. I had booked 2 hours. She managed both legs and bikini but oh lawdy it hurt. Kind of the same pain as a tattoo. It was like a mixture of someone snapping a rubber band on your skin and a jolt of electric shock. But I just kept picturing smooth skin. The therapist first slathers on ice cold gel, your skin turns into goose pimply chicken skin. Then she zaps you. Throughout she snaps photos of before images. I made her promise they don’t land up on BigAndBouncy.com or something similarly horrific.

Then she draws all over your skin with a pencil – sort of like a pattern maker. Then I started imagining she was like the guy in Silence of The Lambs and she was sizing me up for a jumpsuit.

I keep telling you I have a twisted brain.

I was best when we were chatting, it distracted me. It was 2 hours of torture. Really horrid. And it cost about 1000 bucks an hour. And I need about 16 hours so all in it will be an expensive venture. But I’m over the constant hair battle a hairy woman has to deal with. So I’m just going to bear the transition.

Saturday evening was dinner with my friend Drew and his wife Anne.

I’ve worked with Drew before and we really got on and his wife sounded cool and their kids are similar ages so we thought we would all 4 maybe get on. We are also all big foodies so we have a lot in common. They live over the hill in Noordhoek so we agreed next time we would come to their side. We all got on well, I can see us becoming good friends.

We went to Cheyne’s and I felt happy to get to have his food again. We had the line fish, the firecracker crayfish and the chilli salt calamari which were all amazing. I so love the saltiness of the sauce and the rich creaminess of the tempura battered crayfish. The calamari was tender and with a nice bite from the chili. Again I loved the cucumber and mint noodles under the game fish and the fish was nice and firm. They told us it was kingklip, but it tasted different than the previous week but the waiter assured it was the same. The flavour was the same but the fish was a slightly less rigid texture. I didn’t ask last week what the fish was so maybe it was! Both were very nice, just different. 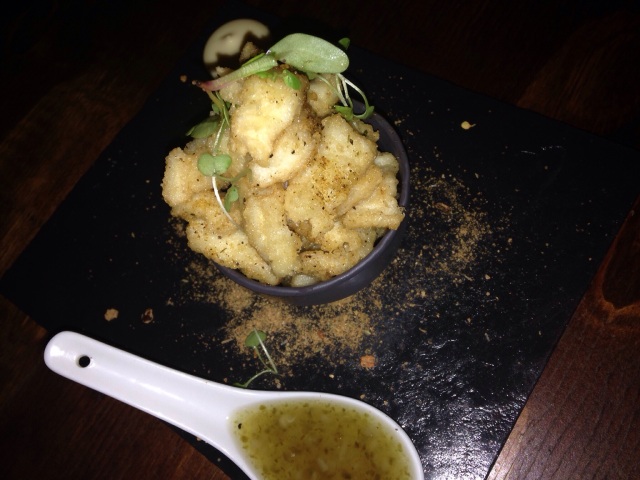 For mains we again had the teriyaki pulled lamb pie, the crispy chili beef, the ribs, Crispy Aubergine tempura and the potato and coconut deep fried dumplings….it was all so divine I only got a pic of the dumplings. We had 2 portions of these, so light and crispy and flavorful. The cardoman coming through strongly and the creamy coconutty sour sauce gives it just the punch it needs.

For dessert Drew had the Irish coffee, Norm and I cappuccinos and Norm had the last blonde chocolate fondant in the kitchen and the rest of us had the brioche with bananas, toffee sauce and peanut butter ice cream. It’s one of my faves. I wanted the fondant but they ran out, but I love the banana brioche so no huge disappointment. 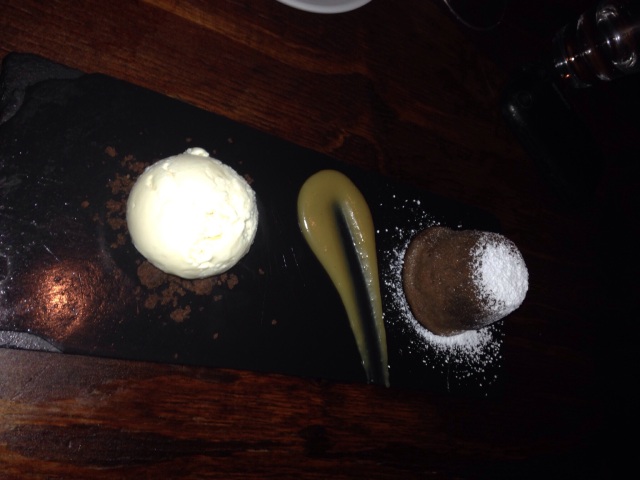 We got home late Saturday and heard a noise in the kitchen, one of the animals (most likely a cat) had brought in a mouse. It was not tiny and Norm kept insisting I come in to help him catch it. We operate a catch and release home. At one stage we managed to get him to run out from under the washing machine except Norm missed him and he ran between my feet. Oh my word I screamed like a lunatic, hopping around bouncing off the counters, I knew I would be more of a hindrance than a help, but Norm needs to have people hovering around when he plays hero. So I complied. Eventually we caught it but it jumped out of the box before we could get it outside and Pixie grabbed it. It then just lay there. Twitching. I told myself it was just scared so we put him under a bush where the dogs couldn’t get him and hoped he recovered. I can’t bear to check. I’m sure nature will take care of things but nature can be cruel.

Today we have gone to a jazz event put on by a friend Lee. Her Dad and his band performed at Spiro’s and it was brilliant. We were seated just outside the room with the band so Norm wasn’t overwhelmed by the music and we could all communicate. A few different people sang so it was a cool vibe. I really enjoyed it. We had lots of cocktails. 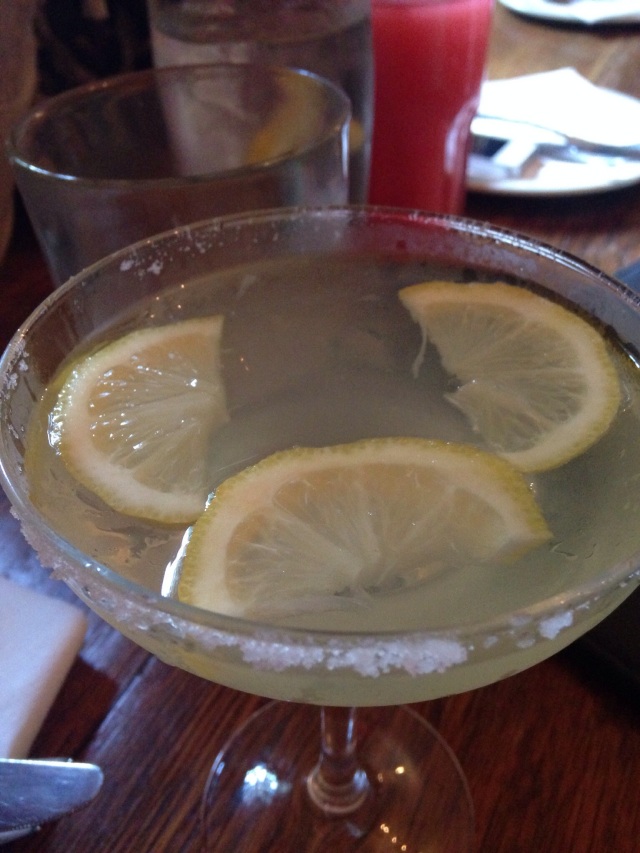 It was a private event with a cover charge for the band and you could then just order off of the regular menu.

Norm and I had the fillet steak and it was a delicious cut of meat, really tender and perfectly cooked.

Retha had the stuffed calamari and Pierre the grilled sardines.

For dessert we had the custard baked in phyllo pastry with ice cream drizzled in honey and the baklava with ice cream. Both were delicious.
>

And a great day was had by all 🙂 I hope you enjoyed your weekend?

The other benefit is the charities that Lee sponsors. She is such a generous hearted woman.
The cool thing about Hout Bay is the sense of community. We had several people recognize us from Face Book and come chat. We all bought The Big Issue from our local HB seller who has been on the route for 17 years. We all know his face and buy where we can.
>

I love the sense of being a village, recognizing people you have never met just from pics of some common friend or a common group. I love that.

2 thoughts on “From Torture to Bliss”