I had my minor procedure last Wednesday. I was such a bag of nerves and in a state of panic. Luckily I had Lily with me to distract me with silliness like photos.

When we arrived at the clinic it was raining and we had to park miles away. But as we started trotting in, a little golf cart appeared with covered sides to drive us to the entrance.
It was like Disneyland meets Gray’s Anatomy and made us giggle like mad. 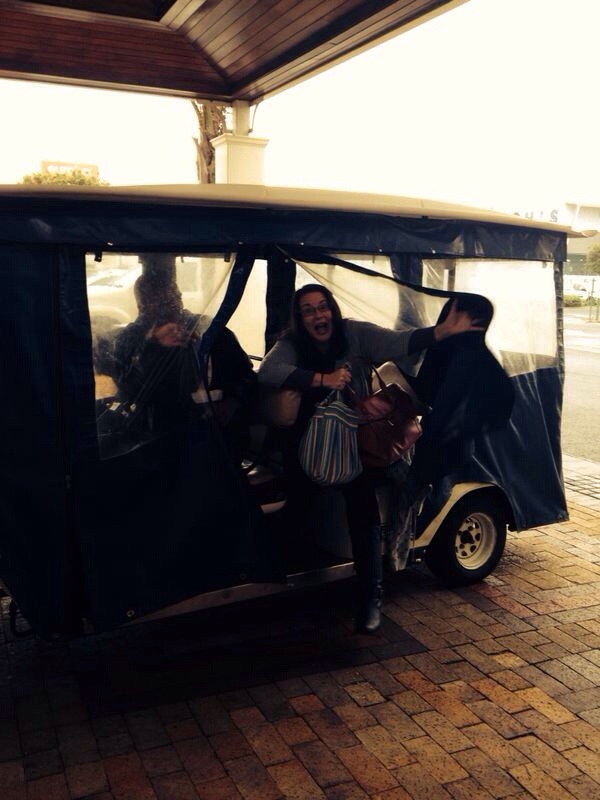 There was an emergency C-section so I was bumped back and only went to theatre at about 5.30pm so I was starving!

I must have looked very scared cos people kept coming up to my bed while waiting to wheel into the operating room and telling me I looked terrible and making me breathe. Nice. Not. Lol. Anyway…..

So I woke up and got back to my room only to be told I might have to wait til 10pm to go home. But this was the same nurse who said I had to wee before I went home to “make sure my uterus worked”. Errrr, what? I didn’t bother asking if she bought her license much like most of South Africa’s taxi drivers. I just counted my blessings she wasn’t operating on me.

The girls have been great nurses and have been a huge help. They made us dinner on Thursday, my fave – tacos and lemon meringue pie. It was delicious and I felt very blessed.

I had no sick leave as I used it all with my hip op last year, so I had to take annual leave so I only took off 2 days and worked from home Friday.

Friday evening I felt well enough to go to my friend Diane’s birthday dinner. It was at what appears to be a new place called Remex. Retha and I drove all way round the city to Tableview and then we followed the directions link from their website. To our surprise it took us to Remax the estate agent!!

We managed to get there eventually and our friend Tony joined us. We had a lovely chat and lots of laughs.

The guy who was in charge seemed like he was the owner as he was very attentive. He tried to describe the dishes to me but I told him I have been to Mexico many times and know what it is supposed to be like, and after chatting we ordered. Unfortunately he got confused and thought I ordered chimichangas and delivered these but there was no drama when I told him I wanted enchiladas. He even brought me a sample of the chilli con carne and the chicken so I could test them!

The chilli poppers were ok. I felt like maybe they needed to cook a wee bit more but they were ok. It was too dark for pics, so you gotta take my word for these things.

The enchilada was good, the chicken filling was nice and chunky and spicy. It came with sour cream, chopped tomato and home made guacamole. Most restaurants these days seem to use that prepackaged crap which is revolting and has a horrid bitter aftertaste from the chemicals required to stop it going that funky rotten avo colour. Bleh!

If I lived in Table view I would definitely go back there, they have a nice vibe about the staff, they want to make you happy.

I was disappointed that they ran out of churros and even more so that they didn’t make their own.

But we still had a laugh, and that was our main objective.