We arrived in the UK on Saturday the 12th of April but I kept it off of social media until we returned on the 22nd. We have had so many security issues when Norm travels and did not want it public that my daughters were home alone.

Our flight was uneventful, I am a terrible traveller considering how much travel I have done. I hate flying, hate being surrounded by strangers, having people pressing their bodies against me in queues or in the plane. It sends me into panic mode. I was unbearable to Norm until I was enroute. I tend to spend the entire time gauging the likelihood of death should we crash and picturing both the going down in flames scenario as well as the landing (crashing) into the sea scenario depending on where the virtual plane is on the wee map on the back of the aircraft seat. I have a vivid imagination. And not in a rainbows and unicorns way – more a death and dismemberment way. My go to position is the dark side…a worst case scenario position.

I don’t sleep on planes (refer to thoughts of hurtling into the sea in a ball of flame) so I watched 3 films I had been keen on viewing. 1st was American Hustle. It was decidedly average. The acting was good, mostly in that Amy Adams (or that other one who looks just like her?!) was able to even pretend to find Christian Bale attractive. His comb over made this kitten want to hurl up a hairball. Ewwww. They even managed to make Bradley Cooper unattractive. It just seemed very slow and I would give it 3 stars out of 5.

Next up was Gravity. I adore both Sandra Bullock and George Clooney but (SPOILER ALERT) he dies and we are then subjected to 90 or so minutes of SB hurtling along head over arse in a space suit or fighting fire and floating about in her pants. Ho bloody hum what a waste of time. My 3rd choice (it’s a 12 hr flight) was Dallas Buyers Club. Wow. Just wow. Amazing acting. Touching story. Loved it! Deserving of so many awards.

Anyway this blog will be a novel if I describe 10 days in this level of detail.

We stayed in Norm’s brothers house in Milton Keynes, alone the 1st night as they were away. We did a bit of shopping and managed to find handbags which were perfect for both events on sale for half price. Norm also treated me to a gorgeous peacock blue dress. We found the perfect fascinator for the wedding as well. By then we were knackered, what with having just flown round the world and all, that so we went to a Pizza Express which was my fave pizzeria in the UK. They do proper pepperoni. 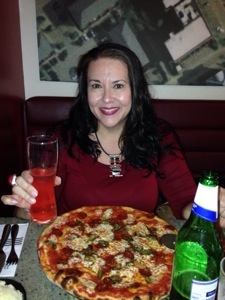 The family arrived back from skiing and we all went to the shops for a wander and that evening Murray cooked Thai curry and creme brûlée for us all. The next afternoon Norm’s mom Mavis flew down from Scotland.

That morning my friend Kairen brought her adorable kiddies to meet me. 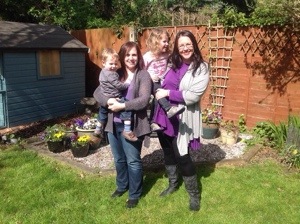 It was lovely to get to meet them and to be able to see Kairen.

We had to be at the Castle early so decided to stay in Windsor to avoid risk of traffic or other issues. We collected Mavis and went to the hotel.

We dined out at a place called Bill’s in Windsor. It was really nice, very rustic with size able portions. I had the prawn fish cakes to start which were nice and crispy but would have been better with some aioli or chili sauce. I had the ribs as my main. They were perfectly cooked and fell off the bone. The chips were light and crispy. The cole slaw was too short on carrot and wasn’t very nice but the remainder was delicious.

We got up and had breakfast then headed to the Castle for 10 am. We were ushered in by footmen after the car had parked in the VIP lot due to Mavis’ wheelchair. We were sat right on the front row. We sat until 11 when the ceremony started. The head fella came in and described what would happen. He asked us to refrain from shouting and applause no matter how great our appreciation and enthusiasm for the recipient. They started with the knighthoods and the Dame which was Angela Landsbury. Andrew Gormley the architect for Angel of the North received his knighthood. I just happened to end up on sky news and several of the newspapers! 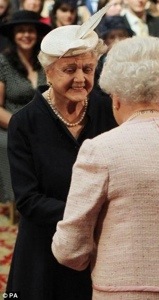 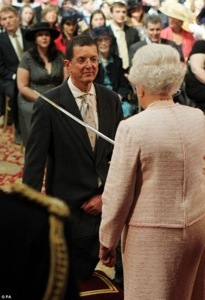 Norm was given his MBE and moved off to the reception room until the ceremony ended and he joined us. 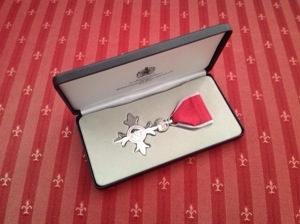 We were given a tour of the public rooms. The art is mind blowing. The beauty of the castle is awe inspiring. We had our own guide, this very charming fella who I really hit it off with. He was quite funny and we passed some catty comments about the people and their dress styles. 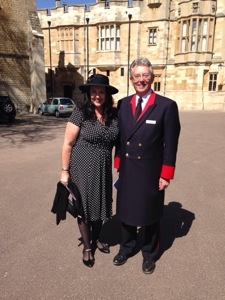 We queued up a bit for photos with a professional photographer until Gil decided to jump the queue and pop us up to the front.

We then were allowed to take our own pics outside in the Castle garden as none were permitted inside. 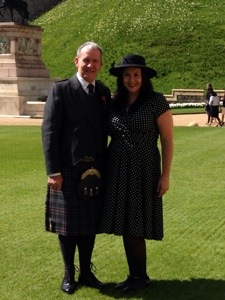 We went back to Milton Keynes to Murray and Amanda’s house and all went out to a country Inn sort of place. I had a rather sinewy fillet steak but the scallops were moist and perfectly cooked as were the potato dauphinoise if slightly dry. The dessert was a very rich chocolate mousse stuff. But the bottle of New Zealand Sauvignon Blanc wine was great! 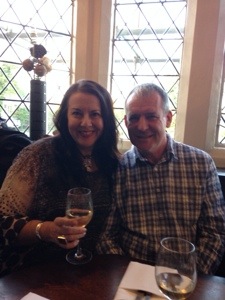 The next night we were supposed to stay with my friend Annmarie but she had a family death and went to Ireland so we booked in at the Loughborough Premier Inn. My friend Daz and his girlfriend picked us up and we went off for a curry in Quorn. The midlands is known for their Baltis and we feasted! We had Bombay potatoes, rice, onion bajhis, and spicy hot curry, I also had a lot of wine. I was rather tipsy when we toddled off home but we had such a laugh and a great evening. It was lovely to meet the woman Daz is going to marry.

The next morning we drove north to Manchester to stay with Martin and Darren who were busy renovating a charming house which they have done so well. The kitchen is to die for. We threw our bags down had a coffee and then headed off to find a cocktail. 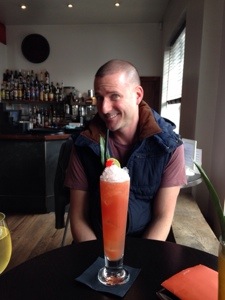 We found a few actually and then we headed to another bar and found a lovely bottle of wine…or 2. We were joined by a friend of Martin’s and had a few drinks more then went to the bottle store for provisions. We went back to the house where Darren had made beef and Guinness Angus beef stew and mash. Oh. My. God. This stew was divine. So tender and so full of flavour. Hands down the best stew I’ve eaten ever. We then moved onto champagne……

We woke the next day to a hot sunny day and headed off to the village to wander the shops and ended up in a beer garden. It was a gorgeous day and had a plate of exotic cheese, meats and breads. And more wine of course. 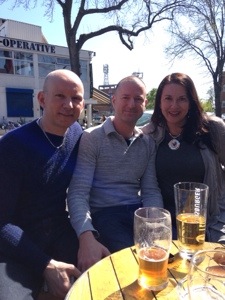 We were waiting on our friend Loz to arrive so we headed back to the house and waited on her arrival. We had espresso martinis while waiting. They were divine! 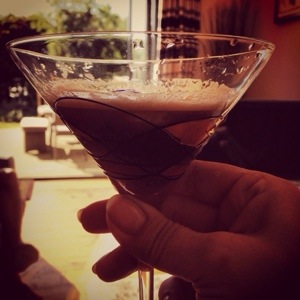 Then after Loz arrived we had a barbecue in the garden. The food all weekend was amazing!
We decided after dinner to hit a bar so off we went again. The music was average and we just had a few rounds and toddled back off home. We all have such a laugh together. It was so special to see them, I just miss them so. 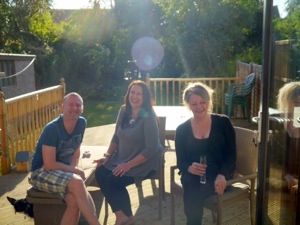 We took Loz to the train the next day after an amazing breakfast by the men, served in the lovely dining room.

Then we dropped Loz at the station and headed to the hotel where the family were all staying. We all were splitting into a few groups as there were loads of people. We ended up at a little gastropub called Rosylee’s Tearooms the food was just fab. I had scallops with bacon and pork belly – seriously one of the best taste combos ever discovered. 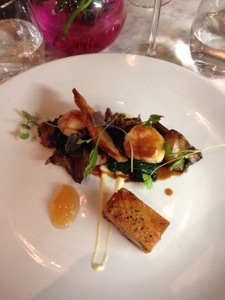 For my main I had monk fish which was perfectly cooked. Moist, tender and juicy. 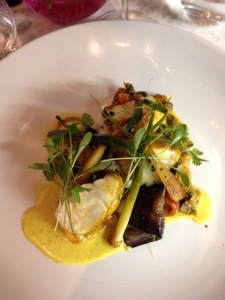 We had a great night and if you are in Manchester I would really recommend this venue. 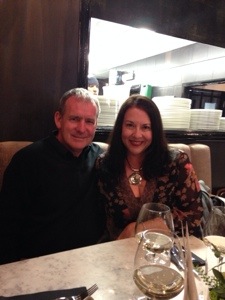 The next day was full on wedding. After breakfast I washed my hair and rolled it. We got ready and took a cab to the Manchester City Hall. The venue was stunning. Stone with beautiful stained glass windows. The couple looked so lovely in their wedding gear and it was a fab ceremony. Alex was in a retro perfectly tailored white dress with black crinolines. Jamie wore his kilt which suits him so well. 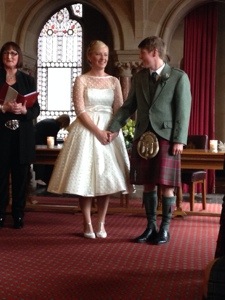 They left the venue in an old Volkwagen camper. 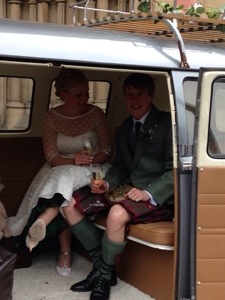 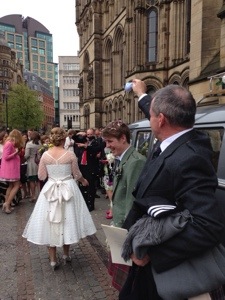 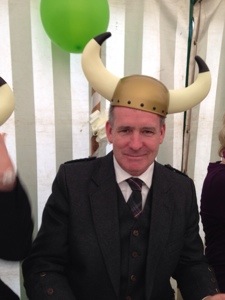 Very quirky. We had a great night and partied til 1 when we crawled into a taxi to head home.

The next day we headed off to Birmingham for lunch with Annmarie and Annalisa. We had a few hours to catch up and then we headed back to London to fly home. 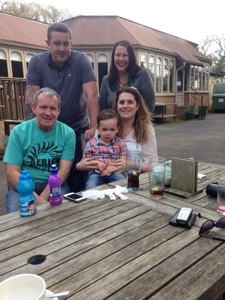 We had such an amazing special trip. We couldn’t have asked for more, I feel so spoiled and privileged and so proud of Norm.

Lily remarked on the fact she was now waiting for us at the airport after so many years of us waiting for them to land in London. Funny the things we forget about a place. Funny how life comes full circle.
>

10 thoughts on “From Windsor to Wedding”