I realise that I have been very lax in blogging. Many fun things have been happening as well as some traumatic things – so just a normal time in the life of the Kitten.

The first week back at work after a long couple of weeks leave is always tough and mine was not only the normal level of change, but also I was moving on to start a new project, at a new client, and becoming office based, not home based. So I did expect to be tired but I underestimated that level of tiredness.

I’ll do a quick summary of the highlights over the last few weeks.

Friday after I started back at work I went home and got straight into my chill out clothes (i.e. pyjamas as the 2 are interchangeable in our house.) We ordered pizza take aways and settled in to watch a movie. I don’t think I managed to stay awake til the end, but that is OK, I seldom do.

Saturday we had planned to go for a very early dinner with some friends. I had booked a table for 10 of us for 5pm as my friend is studying and needed to get home at a reasonable time to do his coursework. Best laid plans and all that…..we all ended up arriving at 5:30. I would like to clarify that I was dressed and ready, handbag on arm, keys in hand, only to find Norm in the garden in his wellies faffing about in the garden at 5 minutes to 5.

We were not sure if the liquor license was sorted out at Ragafellows so we packed up a couple of bottles of chilled sauvignon blanc and headed off. We milled about for a while waiting on everyone to get in and settled and then we were presented with a tray of vodka lemon drop shots. I tend to avoid shots – but I did not want to be rude so I took one. Oh yummy yummy yumm they were delicious! My fave new shooter.

We were celebrating Norm’s MBE and therefore we were given a nice bottle of champers by our friend Greg, and then Julie the owner also sent over a couple of bottles of champagne. Needless to say we realised a taxi home would be required and we just decided to go with the flow. Pun intended…

I started out with the duck on flat bread. 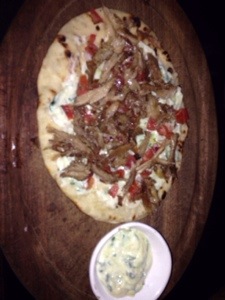 I do enjoy duck, but only under certain conditions. In the USA and the UK, when you order crispy duck it is actually crispy, at least the skin is! I find in SA it is not, it still has a very fatty skin and a lot of the oil. My body does not enjoy that. The duck at Ragafellows is cooked just the way I like it, not oily, not dry, yet shredded.

I love the little potatoes they serve with the burgers. We had a brilliant evening, and ended up staying very late despite arriving very early.

The following day I had a Saturday lunch meetup with some ladies I had been in a book club with back in George 20 years ago. 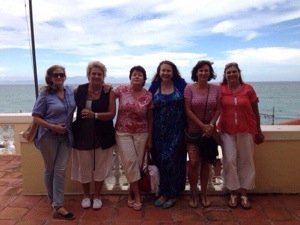 We went to Café Labia at the Labia Museum in Muizenberg. And no it is not a museum displaying multitudes of ladies bits. The less said about the name the better really! It is named after a family if art historian aristocrats, I think Count Labia is still alive.

We had a lovely day sitting by the sea in the sunshine drinking wine and munching fabulous food. I had the chicken ceasar and it was a proper one – anchovies on the side for the fussy ones.

Work muddled on and on. And on. I delivered my first document to the client. Last week we had a shorter week in that we had a team overnight trip to Monkey Valley on Thursday. We all finished work at 4 and headed off, driving over Chappies where the mud slides had been, we could see that there is still so much work to be done but the view is still amazing as was the view from Monkey Valley

and our accommodation in Monkey Valley. 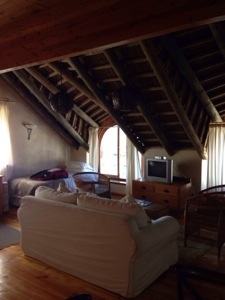 I had my own little thatched roof apartment perched at the top of the hill, up some winding stairs with no railing which I did worry about navigating later after the drink had been flowing. It had a huge room with 2 beds, a kitchen and big sunny bathroom.
We had a braai down at the hotel and then closed down the restaurant, sitting on the balcony listening to the sea rolling in, lights and lighthouse by the bay blinking in the distance. It was stunning and peaceful, if slightly noisy. We then went back to one of the villas where most of the women were staying which had a lovely pool overlooking the beach and carried on.

One of the team fell into a bush and broke her foot while trying to climb into the locked villa which no one seemed to have a key for. I was happy that for once I was not the one who had all of the dodgy tales to listen to all year – someone else took over the mantle from me, one that I was glad to pass on.

It was such a lovely trip and we all had a brilliant time.
Lily and I had a hair appointment on Saturday so we went in early and had lunch at Hudson’s. Yum the best burgers ever.
After we headed over to Mop and got our hair cut. I had loads cut off, what do you think? 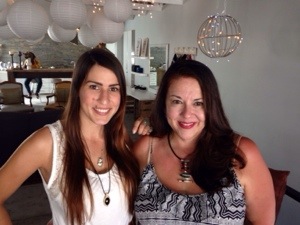 Norm has been away in Lesotho all week so we have been very busy. He arrived back last night. We now have our dates for going to the UK for Norm to receive his investiture of his MBE from the Queen. We are also going to Manchester to our nephew’s wedding. I hope I can arrange to see some of my friends whom I miss so much!